Sister of Charity of Jesus and Mary serves tea CROP.jpg 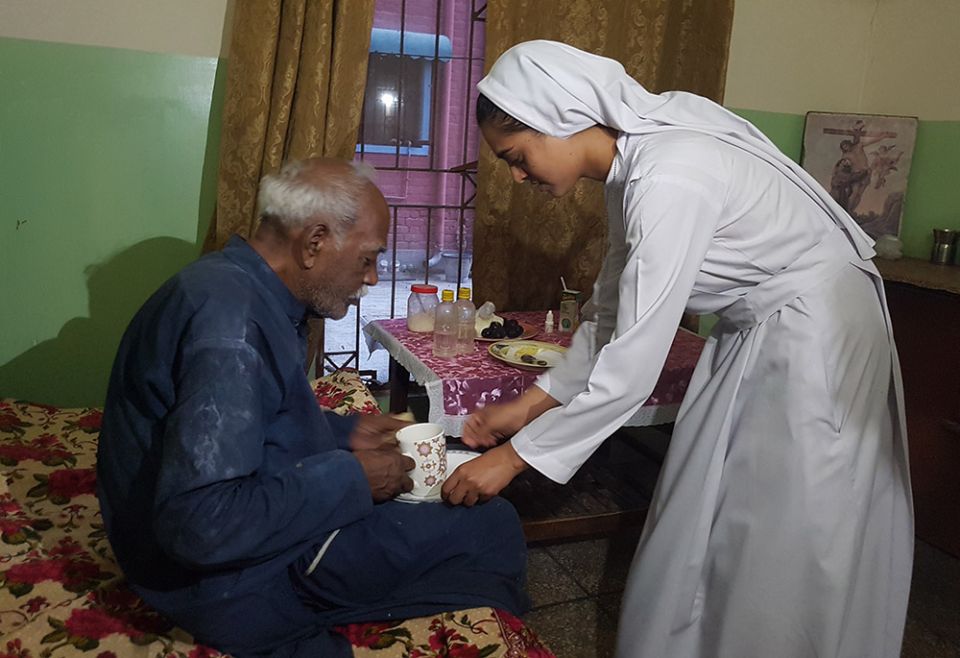 A Sister of Charity of Jesus and Mary serves tea to a resident of Shakina Home for the Aged in Youhanabad, Lahore, Pakistan. (Kamran Chaudhry)

Lahore, Pakistan — The rising costs of electricity and petrol has forced the Sisters of Charity of Jesus and Mary to change their lifestyle at their homes for older adults across Pakistan.

Last month, the nuns installed solar panels on the roof of Shakina Home for the Aged at St. John's Girls High School in Youhanabad, a Christian majority district of Lahore. The facility is home to 20 people between the ages of 60 to 90.

Fans and lights now run on solar power at the house, which was blessed by Lahore Archbishop Sebastian Shaw on Feb. 9, 2013. 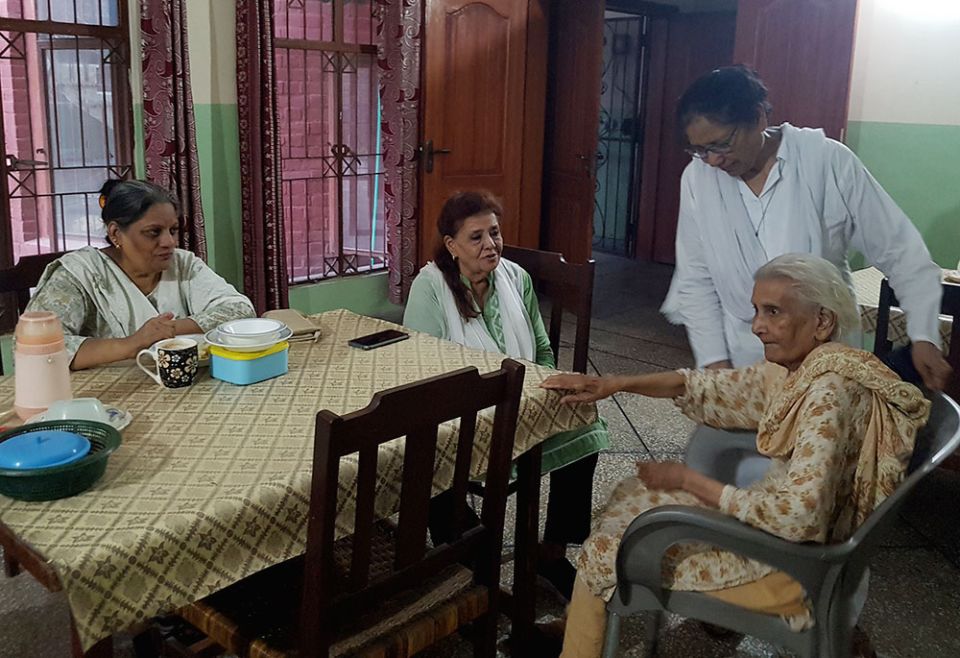 "Despite scorching temperatures reaching 46 degrees Celsius [114 degrees Fahrenheit], we don't use air conditioners," Barkat told Global Sisters Report. "Power outages for more than 10 hours during sweltering summers badly affected the residents. Three to four residents died every year, mostly due to diabetes and hypertension. Most of them are abandoned by their children, and so we cover the funeral costs."

The prolonged heat wave has also destroyed most of the vegetable crops at the facility.

"Picking organic vegetables was a fun activity for the residents, who used to head toward the plantings following breakfast. Now, we only have homegrown okra, bell peppers and some salad," she said. "We eat the same food, but climate change has added to the costs."

Amid the electricity shortfall, the National Electric Power Regulatory Authority approved the federal government's request to increase the base power tariff by 7.91 rupees per unit on July 22.

Sisters of Charity of Jesus and Mary cut wood RESIZE.jpg 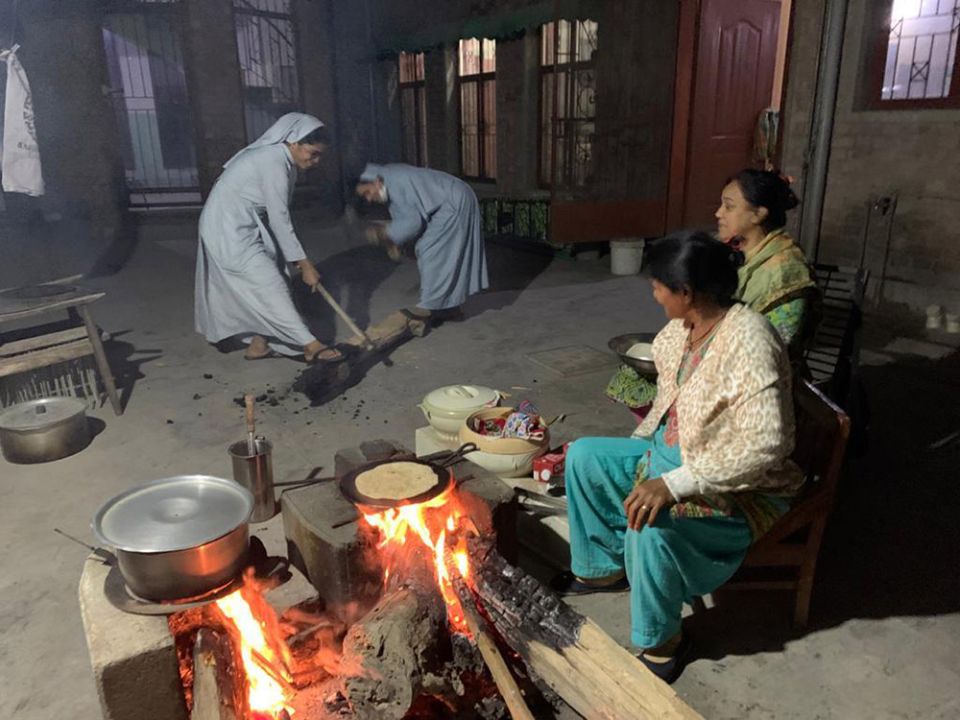 Sisters of Charity of Jesus and Mary cut wood for cooking amid gas cuts in Pakistan this past winter. (Courtesy of Sabina Barkat)

The government cited an increase in fuel prices and the impact of the devaluation of the Pakistani rupee, which hit an all-time low of 233 per U.S. dollar on July 26, as reasons behind this significant increase in power tariff.

The inflation, which hit a 14-year high in mid-June, has affected church-run charity institutes like Shakina Home that offer free residence to older adults.

However, Barkat says her experience as a Montessori teacher has helped her in dealing with the elderly residents.

"My worst fear is that they feel like this home as another hell. I ask junior nuns to be good listeners, solve the trivial matters which are important for the residents, and feel their pain," she said. 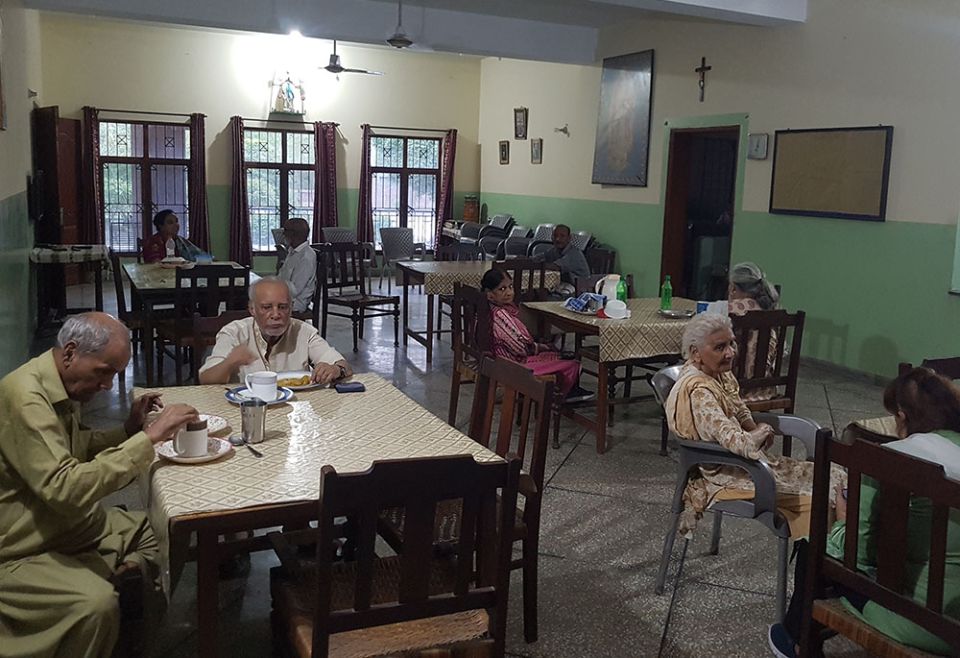 The dining hall of Shakina Home for the Aged in Youhanabad, Lahore, Pakistan (Kamran Chaudhry)

"They never speak ill of their children. They simply wait for them, hoping the children get time to visit them soon. After living a difficult life, they don't need any training."

To raise funds for the maintenance of the building, the five nuns at Shakina Home initiated a candle-making project in 2020. Most of their customers are priests based in the Lahore and Islamabad-Rawalpindi dioceses.

"It's a feast-related venture," Barkat said. "The price of a Christmas or Easter candle ranges from 100 rupees for a votive to 4,000 rupees for a large pillar. The orders in between are occasional for those who prefer the quality of the wax."

In the Lahore Archdiocese, Sisters of Charity of Jesus and Mary also manage six schools, including St. John's Girls High School, where the number of students dropped from 750 to 600 at the start of the COVID-19 pandemic. 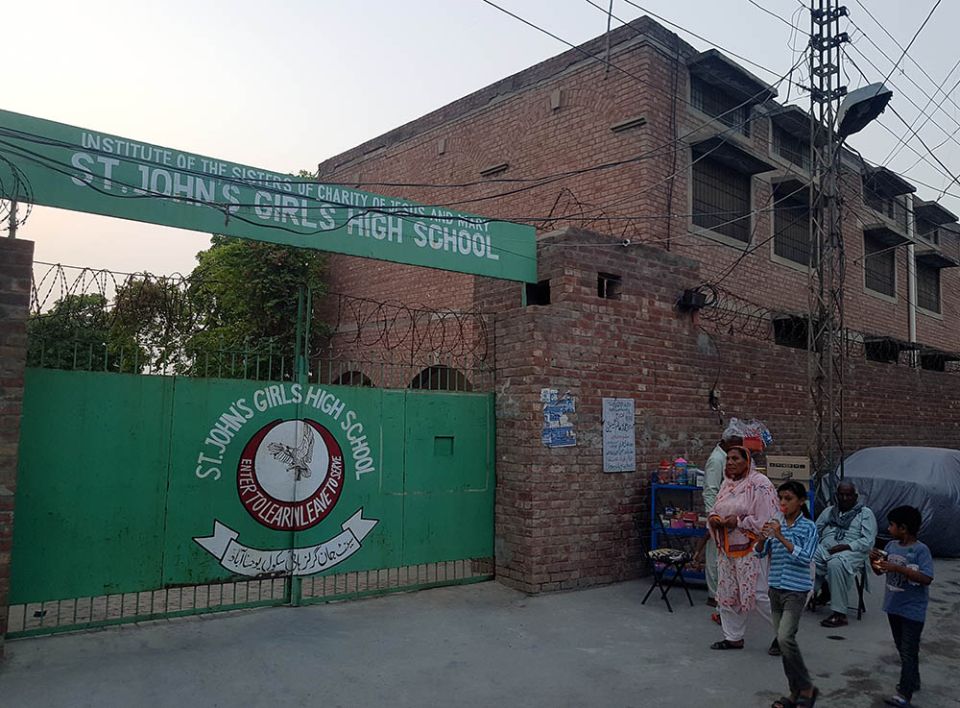 Besides local contributions, the sisters' Lahore province donates 60,000 rupees to Shakina Home while the five resident nuns of Shakina Home together contribute 32,000 on a monthly basis. These cover the salaries of the staff of three people — a gatekeeper, a cook and a house cleaner. A driver was let go in March to meet increasing expenses.

Shehla Muntazir, 61, moved to Shakina Home in March after her youngest sons accused her of stealing some jewelry. The mother of four became a widow after her husband died of brain hemorrhage in 2010. Now, she only receives visits from her daughter, who visits Youhanabad once a month or sends a driver.

"My son used to demand house rent and unpaid bills. I used my husband's pension, but the clashes reached to verbal abuses and court cases. He warned me against defaming him when I abandoned his house," she said.

In January, she visited her eldest son in Lahore but returned sad after 10 days.

"My 10-year-old grandson calls me 'Amma.' He was the one who called me to stay, but his mother kept hurling cynical comments," Muntazir said. "I had everything in life. Now, the nuns are helping me in starting a new life. I feel blessed to buy new household items. I never fight with other residents."

Originally called Dar-ul-Shafqat ("House of Compassion"), the facility was built by Goan Fr. Ronald Alexander D'Souza in 1979 a few meters from St. John's Girls High School. It consisted of two-story wings of 16 rooms with a large courtyard in between.

On Jan. 17, 1980, he donated the home to the Sisters of Charity of Jesus and Mary, who established the community in Youhanabad. The Brothers of Charity also help the nuns, especially when there are sick and dying patients.

D'Souza lived and died at the St. Joseph's Home for the Aged in the Maryville area of Karachi, the southern archdiocese, which is also run by the Sisters of Charity of Jesus and Mary.

Helping a man at Shakina Home for the Aged CROP.jpg 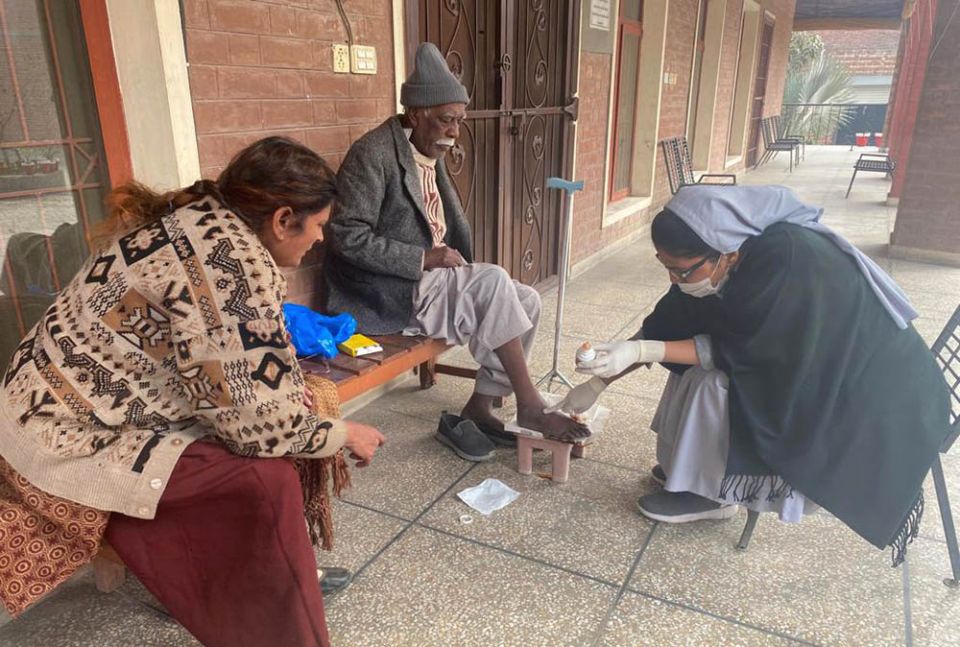 A Sister of Charity of Jesus and Mary attends to the wounds of a man at Shakina Home for the Aged in Youhanabad, Lahore, Pakistan. (Courtesy of Sabina Barkat)

His father, Frank D'Souza, was the first Indian the British appointed as a member of the Indian Railway Board, and he set up the Pakistan Western Railway after the partition of India in 1947. Maryville, his large property in Karachi, was taken by the new government of Pakistan when he opted to move to India after the partition.

In 1947, Mohammed Ali Jinnah, founder and the first governor-general of Pakistan, requested Frank D'Souza's help in setting up the Pakistan railway system, and D'Souza agreed to return Maryville. Upon completing his job in Pakistan, D'Souza donated his house in Karachi to the Sisters of Charity of Jesus and Mary to be used as a home for older adults. He returned to India in 1961.

The Sisters of Charity of Jesus and Mary in Karachi had to cut spending on the July 23 celebration of the 60th jubilee of St. Joseph's Home because of the increase in the cost of living in the seaport city. 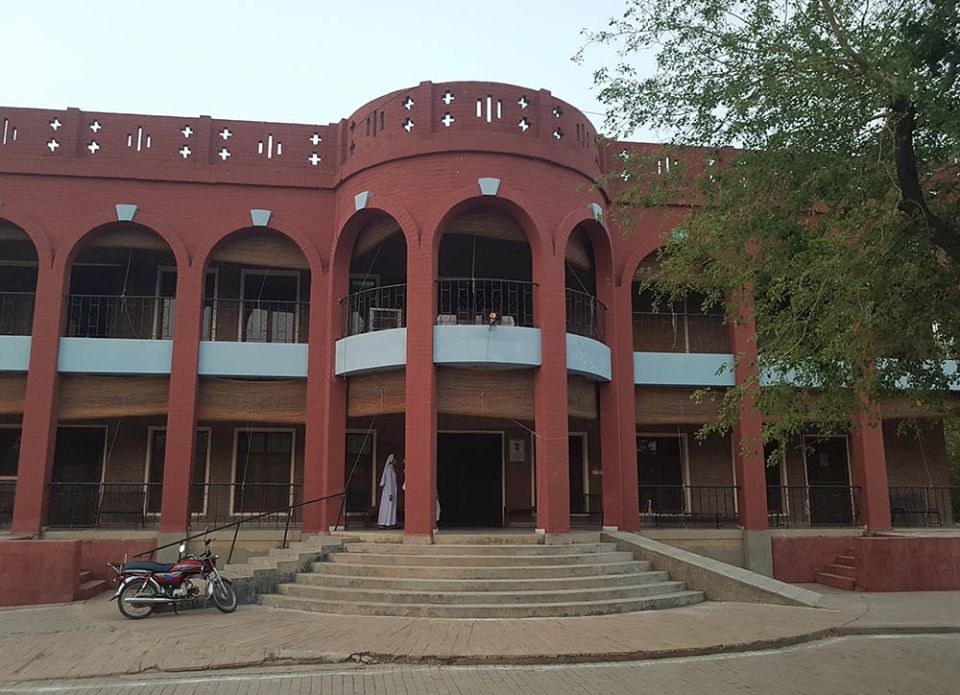 Unlike Shakina Home, the Karachi branch charges 12,500 rupees monthly from its 17 residents, all of them Christians. A thousand rupees is additionally charged from those who bring electric appliances, including refrigerators, irons, TVs and microwaves.

"The rent was increased this month [July] to cover the increasing expenses. We only take [members of the] English-speaking Goan community who can afford the expenses," said Sr. Maria Teresa Ujaggar, administrator of St. Joseph's Home.

"Some bring additional appliances to beat loneliness. They have separate room with attached washrooms."

The nun is awaiting reply to letters of support sent to local donors, including retired military officers.

Ludo at Shakina Home for the Aged RESIZE.jpg 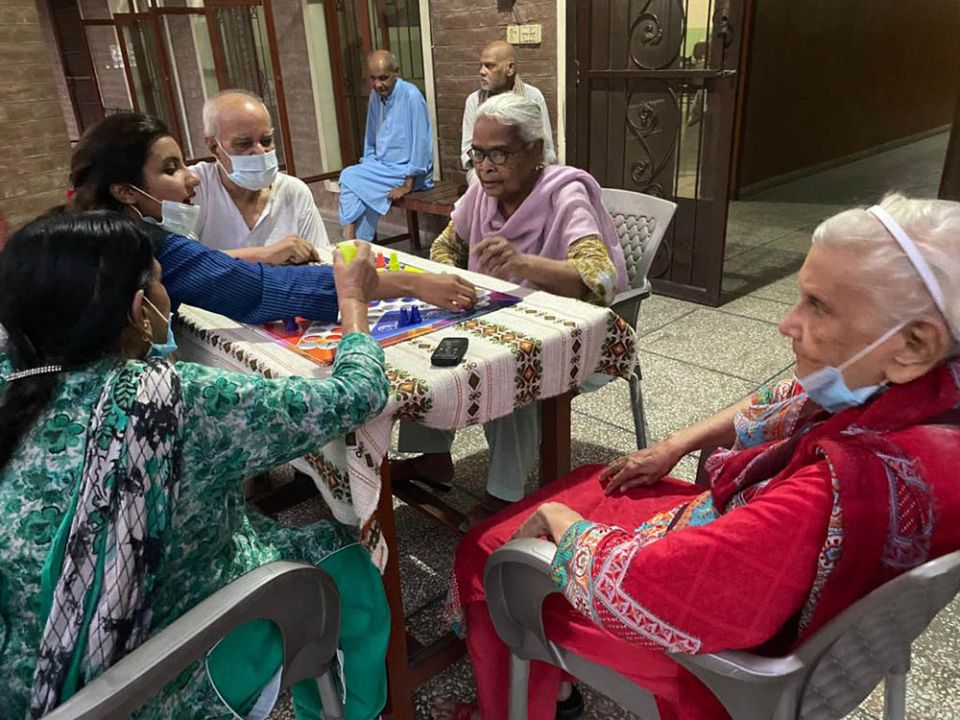 The residents of Shakina Home for the Aged in Youhanabad, Lahore, Pakistan, play Ludo, a strategy board game. (Courtesy of Sabina Barkat)

"Managing the budget with three meals amid rising inflation is depressing us," she said. "Foreign funds were reversed last year due to strict policies of Economic Affairs Division. Local donors financed the repair of our leaking roofs last year. There is no support from Karachi Archdiocese."

Fr. Francis Gulzar, who served as the parish priest of St. John's Catholic Church in Youhanabad for a decade, lauded the service of the Sisters of Charity of Jesus and Mary. The former vicar general of the Lahore Archdiocese had spent time distributing rations at the Shakina House the last few Christmases.

"It's incredible given the financial crunch these days," he said. "The nuns are continuing the mission of their foundress in difficult areas like Youhanabad, where poverty is rampant. Still, I make sure that the people understand and support such causes."

Kamran Chaudhry is communications officer at Caritas Pakistan National Secretariat in Lahore. He is also a content writer for Youth Development Foundation, a nongovernmental organization that works with youth for peace building.

Pontifical university takes up sex abuse of nuns by priests