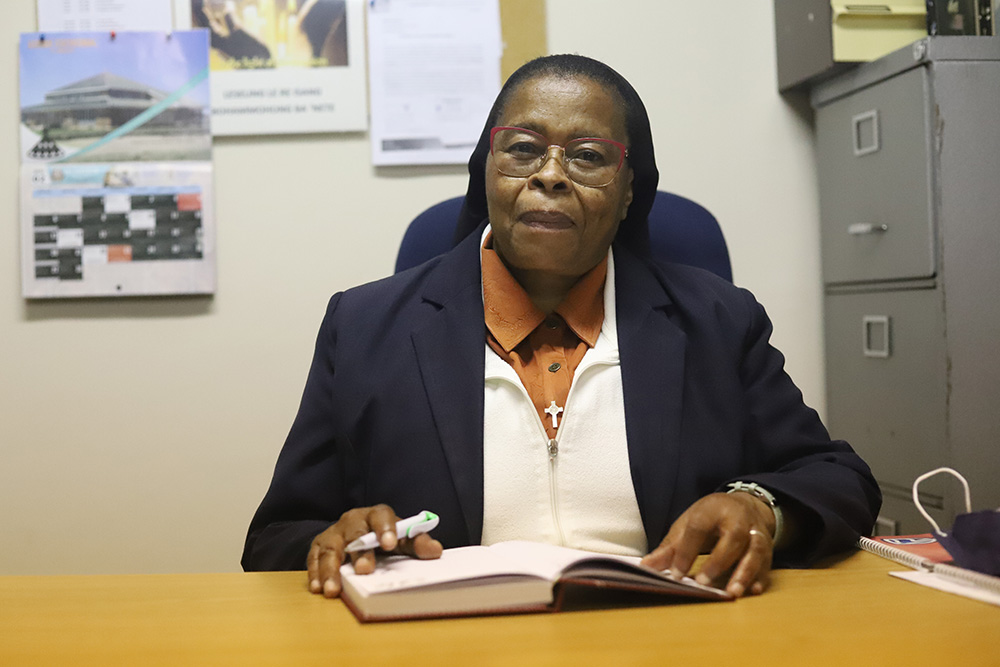 Sr. Anna Lereko, the provincial superior of the Sisters of St. Joseph of St.-Hyacinthe, in her office in Maseru, the capital of Lesotho. She runs a night school for herd boys to ensure every child has access to education in Lesotho. (GSR photo/Doreen Ajiambo)

Sr. Anna Lereko, the provincial superior of the Sisters of St. Joseph of St.-Hyacinthe in Lesotho, has dedicated her life to ensuring every child can receive a formal education in a country where young boys are traditionally denied the opportunity to access education and instead work as shepherds and herd boys.

Growing up as a boy in the mountain kingdom of Lesotho is risky. From the age of 5, boys are expected culturally to drop out of school and look for a job as a herd boy or help his family tend cattle, sheep and goats. The situation has left many boys deprived of education while girls are allowed to go to school.

According to recent UNICEF data, the southern African nation has 1.6 girls enrolled for every boy in secondary school, making it the highest ratio for female education attainment globally.

"The boys are disadvantaged in this country because they have no chance to attend school and cannot at least learn how to read and write," Lereko said. "They spend most of their time caring for the animals in the isolated highlands."

Lereko said the situation touched her, and she began a campaign to protect the right to education for young boys. She began a night school on the mountain of Mokhotlong, a city in the northeastern part of Lesotho, where boys take animals in search of dwindling pasture.

"My intention is to help the boys to at least be able to read and write," she said, noting that the night schools are the only chance for the herd boys to have an education. "We ensure the boys attend the lessons at night, when the animals are resting. It's a journey we started as a congregation, and I believe that we will have equality where every child has a right to access formal education one day." 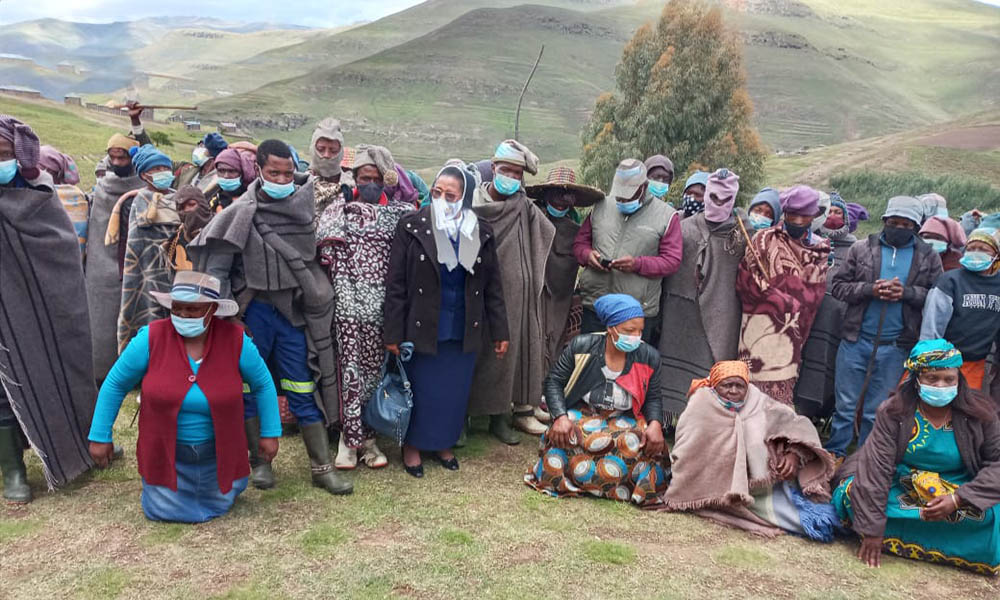 Sr. Anna Lereko interacts with herd boys on the mountain of Mokhotlong, a city in the northeastern part of Lesotho, where boys take animals in search of dwindling pasture. Lereko runs a night school for herd boys to ensure every child has access to education in Lesotho. (Courtesy of the Sisters of St. Joseph of St.-Hyacinthe)

Lereko said her charism also pushed her into the ministry to help vulnerable families who cannot pay tuition fees for their children but instead decide to send them to look for jobs as herd boys to help their low-income families. Her congregation's mission is to work with the vulnerable poor and underprivileged people of God, she said.

"Shepherds fall under this group of vulnerable people," she said. "It's the reason why we decided to help them get an education."

GSR: Tell us about your ministry and how you started it.

Lereko: I live in St. James in the Mokhotlong district, which is the least-developed district in the mountains of Lesotho. In this poor area, the Shepherd School of the Sisters of St. Joseph is situated. The purpose was to come closer to the boys to help many get an education.

Part of the mission of the Sisters of St. Joseph of St.-Hyacinthe is to work with the poor and vulnerable people, the disadvantaged and oppressed part of the society. In Lesotho, the farmers whose lives depend on livestock — sheep, goats and cattle — employ the poor boys to look after their animals. These animals are kept on the sides of the mountains for a long time during the year, where life is very difficult for the boys. The boys have no chance to attend school.

In 1992, we decided to respond to the situation. We built a shepherd's school at the foothills of the mountains where many boys could be found in the evening, when the animals are resting, and over the weekend, when the boys could find someone to look after the animals. We intended to try to help the boys to at least be able to read and write.

However, they are not only taught how to read and write, but they are also taught about Christian values. Because of spending most of their time apart from other people, some engage in unwanted behaviors, which sometimes end up with them being imprisoned. So, in winter, when the boys come back to their villages, we hold one- or two-week workshops where, among other things, they are taught about law and order and also about good health behaviors, such as keeping their bodies clean and eating healthy foods.

What are some of the challenges you face as you try to manage the school?

We meet several challenges. One of them is that some of the owners of the animals will not allow the boy to go to the shepherd school. Sometimes, when we realize that the boy is talented and can attend proper primary school and we suggest to the parents that we will help the boy with school needs, we meet resistance from the parents because they depend on the boy's salary at the end of the month.

Sometimes, the shortage of funds hinders us from doing more workshops, sending the talented boys to school, or buying them shoes and warm clothes in winter. Another challenge was COVID-19. During this period of many months in 2020 and 2021, we could not go on with our work at school. So the boys lost the little knowledge they had. We have to start all over.

But in reality, we see the Holy Spirit working among the boys and us. We pray that the boys know more about Christ and realize God's love for each of them.

How is the state of education in Lesotho?

There are low enrollments of children in schools in Lesotho, from primary to secondary. Most parents are poor and cannot afford to pay school fees for their children, as is required of them by the Ministry of Education. So the education standard has kept deteriorating instead of improving. Many children, especially boys, stay home instead of going to school because their parents have no money for tuition.

We have been praying for this developing country's economy to improve so that the education standard will improve. We want to see every child going to school despite their family background. 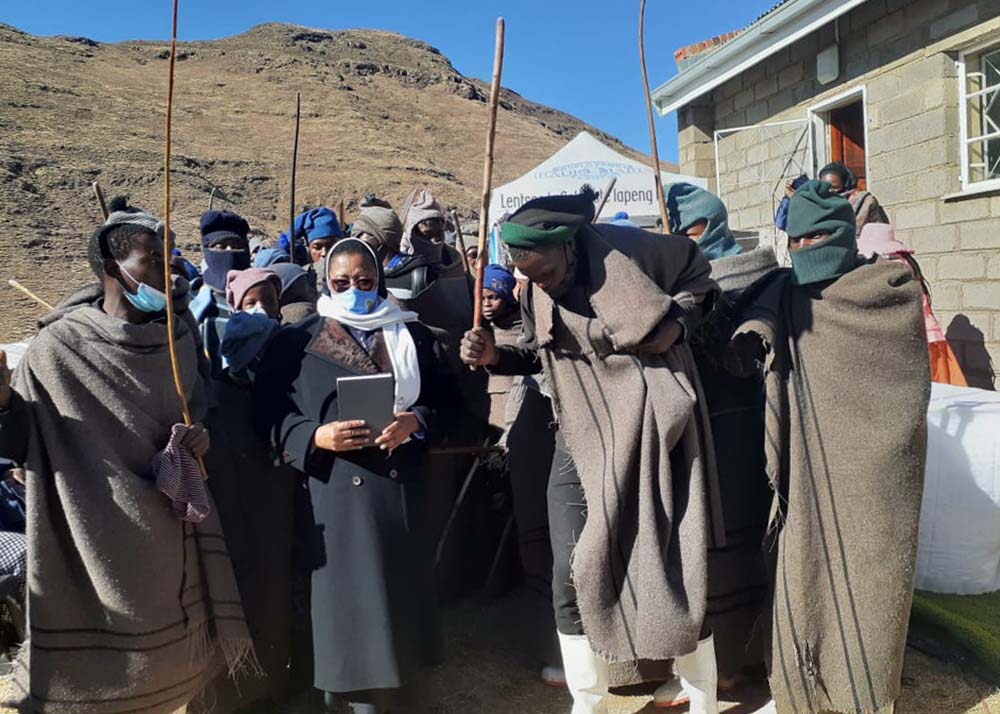 Herd boys sing for Sr. Anna Lereko at their school on the mountain of Mokhotlong, a city in the northeastern part of Lesotho, where boys take animals in search of dwindling pasture. (Courtesy of the Sisters of St. Joseph of St.-Hyacinthe)

As religious sisters, we have committed ourselves to promoting this country's education by starting night schools for herd boys to ensure boys access formal education like girls.

How many students do you currently have in your school?

Though most shepherds are not regular school attendants, we estimate about 200. The shepherds don't attend lessons because they spend about two to three months at cattle posts in the mountains throughout the year.

It is not easy to say how many of them passed through the school because the purpose of the school is to teach them to read and write. So they come and go as soon as they can read and write. They do not do all subjects done by other primary school children.

However, the sisters take a few of them to attend primary school and study until they do their final examinations. We pay for their tuition fees.

What do you teach these herd boys when they enroll in your school?

We basically teach them how to read and write. Others are enrolled and allowed to follow normal school curriculum.

But some of them are taught how to do some handcrafts work. After the training, they can make Basotho hats and bracelets and decorate their gray blankets with different colored wools. They then bring them to the school to be sold, mainly to tourists.

Read this next: While animals rest at night, herd boys in Lesotho go to schools run by sisters