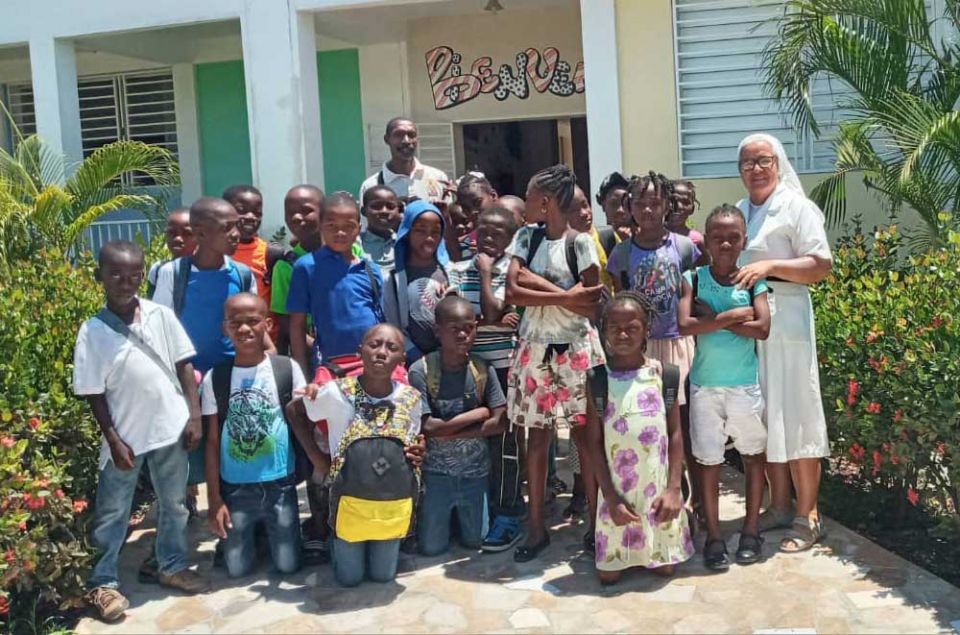 The magnitude-7 earthquake that struck Haiti in January 2010 was a devastation that the Caribbean island couldn't afford: The poorest country in the Western Hemisphere lost an estimated 300,000 lives in its largest natural disaster, and more than 1.3 million were left homeless.

The home belonging to Sr. Gloria Inés Gonzales Ramírez and her fellow Dominican Sisters of the Presentation of the Blessed Virgin was part of that rubble.

In rebuilding a new home, Gonzales said they looked for land that would also "be part of rebuilding Haiti," with a pediatric center and school for those the earthquake displaced.

"We were thinking long-term," said Gonzales, who is originally from Medellín, Colombia (as is her congregation), and moved to Haiti in 1999. "We thought that this would reconstruct the societal fabric above all for the children and babies, particularly the vulnerable population that was injured in the earthquake."

So far, she said, it's been a success, as the pediatric center, foster home and school are available to all local kids in its semirural area of Corail. 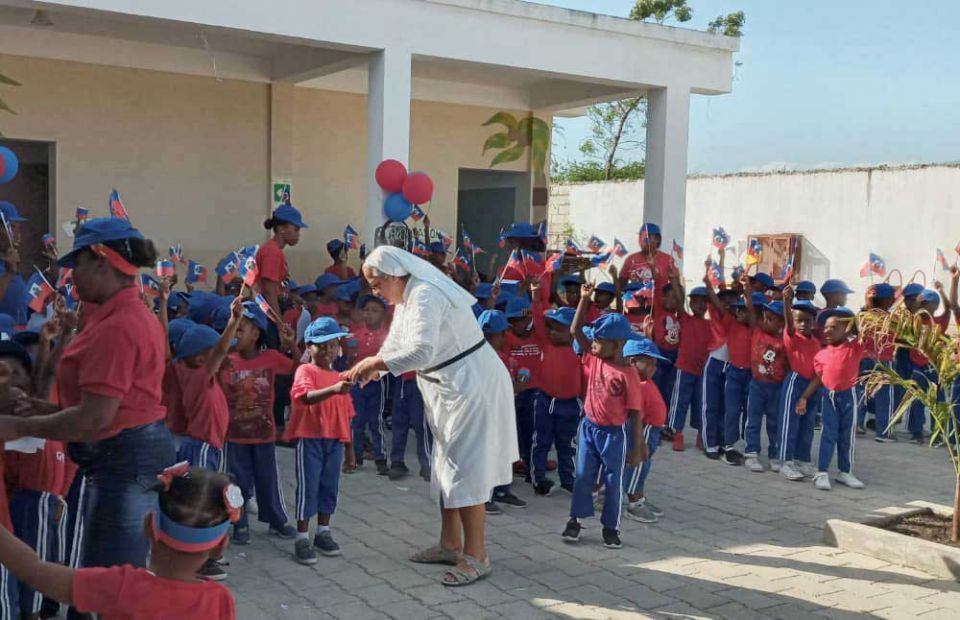 The school celebrates a fiesta de la bandera, Flag Day, each May to honor the Haitian revolution. (Courtesy of Gloria Inés Gonzales Ramírez)

A teacher by profession, Gonzales aims to change the country's educational paradigm — to one that prioritizes care and understanding rather than disciplining children through punishment — through the Missionary Center Maripuspal of Dominican Sisters of the Presentation, her congregation's nursery school where she is the director. (She also directs the local primary school the students attend after the nursery.)

In conversation with GSR, Gonzales shared her teaching philosophy and the progress she's witnessed among her students.

Gonzales: The nursery school began by inviting the children outside the area and educating them, starting with those 2 years of age.

I remember a doctor telling me, "Look, Sister Gloria, a town is saved by its children. We must educate the children between 0 and 5 years." At this point, the pediatric center was already addressing the health needs of those from infancy to 15 years old, but the school focused on ages 2 to 5. There were already several primary schools in the area, and we didn't want to compete with them when the need was already being met.

GSR: What do you mean when you say you want to change the educational paradigm?

I used to teach at a private school run by the Sacred Heart brothers, but the earthquake changed my views on education. Even before the earthquake, I saw a lot of frustration and punishment happening in schools, so I thought, "If we're going to start an educational center, we need to change the paradigm."

My biggest challenge was to think of how to change the education scheme — but not the system, necessarily — with patience and care above all.

At the private school, the education was very traditional, punishing children when they misbehaved. I didn't like that. So, when I started this school, I realized we couldn't continue that way. We couldn't, because for the children, to live in an impoverished country with a house destroyed by an earthquake and then to go to a school that treats you harshly, that only compounds their frustrations. But to be tolerant, caring and patient was a mechanism to educate them differently.

That was my philosophy: to educate them with joy, playfulness and kindness at the center. Kids should typically be laughing and smiling, and here, they used to not really do that.

Tell me more about how the projects came together.

We built our motherhouse in 2012 to share the property with our other projects. We moved into the motherhouse in 2013; in 2015, we built and finished the pediatric center, and in 2017, we finished building the Maripuspal nursery school, which has about 140 students. Then came the foster home, which serves about 65 individuals and offers a variety of services, including a soup kitchen and social space. 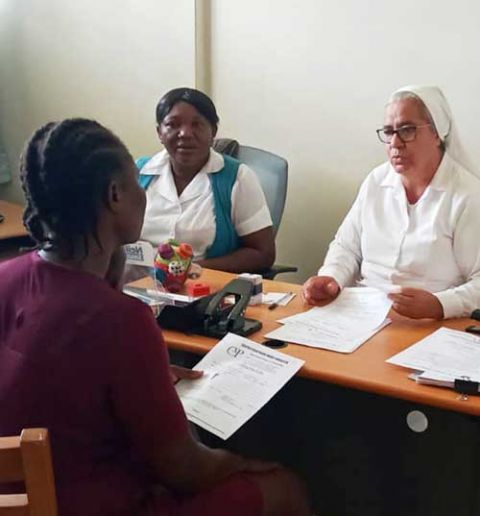 No government agency or institution has ever approached us offering to help or partner with us in these projects. We just grew by word of mouth and with the help of the Colombian bishops' conference, which after the earthquake sent pastoral workers to Haiti to assess how many Colombian religious were addressing the country's needs.

Though my congregation bought the land and began the projects, a few other Colombian communities in Haiti — thanks to the bishops' conference and other benefactors from Medellín — joined forces to establish the foster home.

We decided not to make any of our services totally free. If we did that, we thought, we'd end up generating more poverty. [Parents are asked to contribute items such as soap, diapers and toothbrushes for lessons on hygiene.]

Our Haitians, in their poverty, in their happy spirits, in their desire for progress, they invest in their education because it's not something that can be robbed of them. People here fight over land, houses, but never education, and that's the best thing that someone can leave for their kids. This is a poor country, so we aim to reaffirm the dignity of every person we serve.

How have you seen these developments affect the children?

When we experienced the earthquake, it was hard because I saw a lot of hurt children, amputated. Figuring out how to help these children was more important to me than reconstructing our house.

If you could see just how much the area around our property has transformed since we bought it — it was totally isolated, and now, it's really populated with a lot of little villages. The kids of the area come to this center, some from farther away.

They arrived thin, malnourished, so we also feed the kids twice a day: a breakfast and a hot plate at noon before going home. So now, none of our kids are sick or malnourished; on the contrary, they actually gain weight because with the pediatric center, we accompany their health. 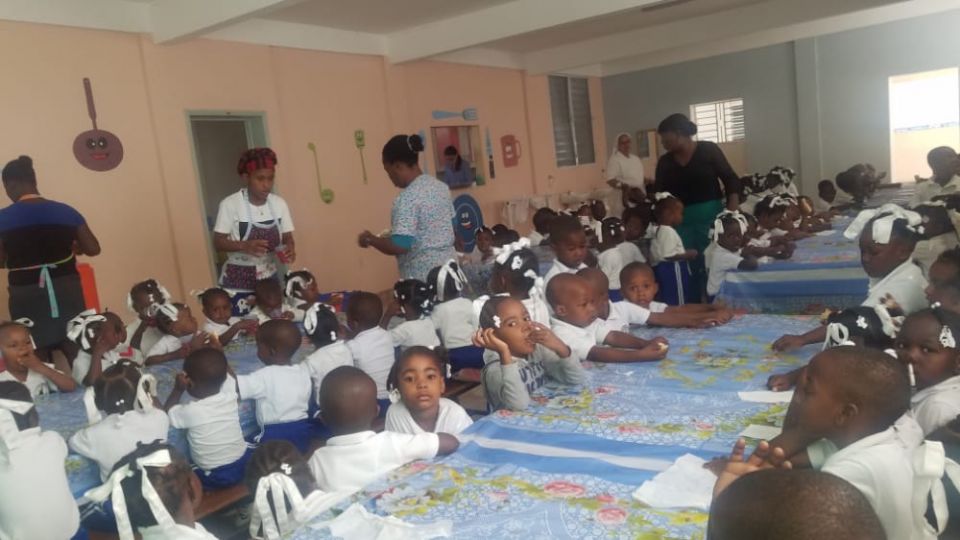 Students dine at the Maripuspal school. Thanks to the food they are given at the school in Corail, Haiti, the students who tend to arrive at the school malnourished become healthy. (Courtesy of Gloria Inés Gonzales Ramírez)

They're happy. They were sad, and it hurts me not to see kids smiling. But ours are incredibly happy and restless.

Our ministry supports them in academics, books, supplies. We also host workshops with the parents to teach them how to help their kids maintain proper health and hygienic practices.

The families are very happy, and we've witnessed a beautiful transformation among the kids: They're more extroverted, less aggressive, more developed. It's beautiful.

Haiti is a country that's thirsty for help, for someone who will collaborate, so me and my five other sisters always try to respect their culture in this ministry. We come into it with a lot of prudence: Here, you have to come into this with your mouths shut and your eyes wide open. That's the typical mistake that nongovernmental organizations make, approaching it the other way around, with their mouths open and eyes shut.

We've learned how to be giving in our poverty. We don't give out money, but we help them learn how to work and empower them. They are our collaborators. We hire locals to be our personnel so that they continue these missions after us.

Our greatest challenge is to continue being innovative and creative in addressing the emerging needs. In a country that's regularly destabilized by sociopolitical crises, the spirit that continues to envelop and guide us is the missionary spirit, the great hope and desire to work as a community because alone, we wouldn't be able to accomplish this.