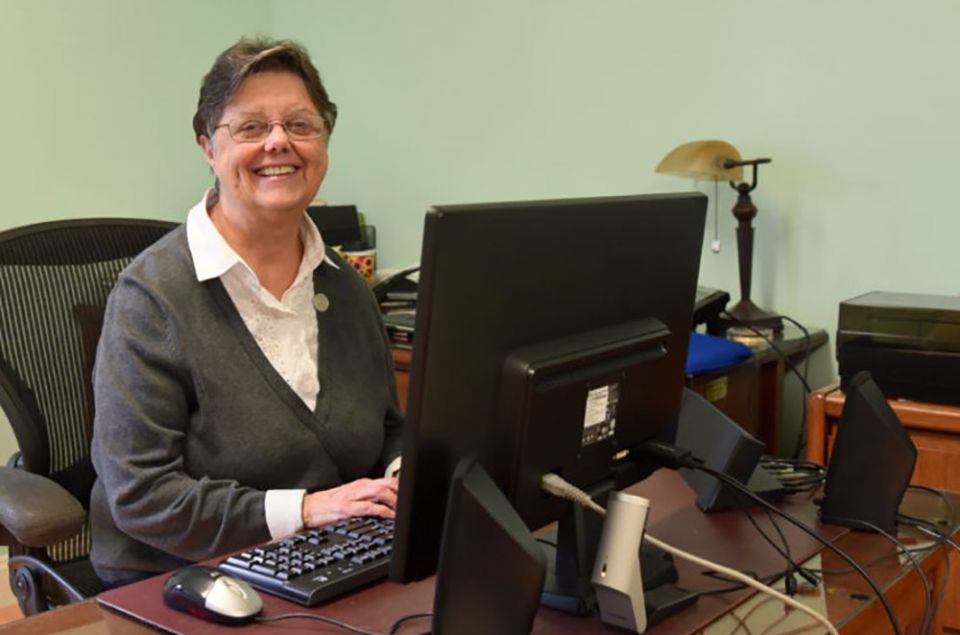 When a man from the bishop's council of the Diocese of Portland, Maine, approached Sr. Terry Gauvin about nominating her for a Lumen Christi Award, she told him, "You know, I'm really not qualified for this."

But he was persistent, and Gauvin thought it might bring attention to the anti-trafficking work of CourageLIVES, the program she has helped shepherd since its founding five years ago.

"Dear Lord, I never imagined I would get an award," Gauvin said.

The award from Catholic Extension was won by Fr. Ron Foshage, a La Salette priest in Jasper, Texas. But Gauvin was one of eight finalists, who each received $10,000 for their work.

"I said, 'What!?' " Gauvin said. "I'm very touched and humbled and very appreciative of the bishop and his council for thinking of this."

This kind of reaction is not new for Gauvin. In the early 1960s, she was feeling called to religious life but knew it wasn't for her.

When she finally gave in and entered the Servants of the Immaculate Heart of Mary (better known as the Good Shepherd Sisters of Quebec) in 1966, "it was just for a couple of years." She told God she'd try it but didn't expect it to last. Today, she's provincial superior of the order's American province.

GSR: Most people can't imagine that human trafficking is going on around them. They certainly don't imagine it is happening in Maine.

Gauvin: No, they don't, and that's why we got into this. A couple of our sisters went to a program called Not Here, and they came back, saying, "We may not think it's happening in Maine, but it certainly is."

Statistics show that in Maine, there are 200 to 300 people trafficked a year. In the five years we've been open, we've helped 40 in the program and helped at least 100 outside the program. We help them find a home, a job, reconnect with their family. We give them food from our pantry.

How did CourageLIVES come about?

The Good Shepherd Sisters opened St. Andre Home in 1940 as a home for women who were pregnant and not married. At the time, it was a scandal, but the only place for these women to go hide was in jail [protective custody] up north.

By the 1970s, being a single mother was more acceptable, and it wasn't needed, so we said, "What do we do?" So we opened group homes instead. More and more women were keeping their babies, but they were young and didn't know how to care for them.

Then, in 2013, we lost the state funding and had to close the group homes. I was on the board of St. Andre's at the time, and a foundation gave us $450,000 to start up what would become CourageLIVES. It was originally called Hope Rising, but there was another organization named Hope Rising in another state.

Most people assume that helping someone who's been trafficked means just helping them escape. But your program shows it's much more involved.

The women we serve need so much courage. First, to leave the life, they're often arrested or have to escape, then they need the courage to come to our program and recover. It's very difficult for them, and it's difficult for them even after they leave here, so we continue to support them after the program. But it's also rewarding to see how some have really blossomed. We just heard one woman got her driver's license. That was a huge success.

There's the courage of the staff, as well, to be willing to work with these women. It's not always easy.

The [Good Shepherd] community was willing to take a risk with this program. There wasn't much funding for it, and there still isn't. But the community started in Quebec for women in need, so how can we not do this work?

We're such a small agency, it's hard for us to get funding. We can't get federal funding; the funding for human trafficking is very limited. But the community has a foundation, so right now, that's helping with the budget, and we're very fortunate that we have other religious communities that support us with finding.

Do you see the Holy Spirit working through CourageLIVES?

Oh, yes, from the very beginning. The Holy Spirit and I are very good friends. I go to her or him many times a day.

I think it was the Holy Spirit that sent our sisters to the Not Here program who came back saying, "This is the DNA of our community, healing women." I saw the Holy Spirit in finding [CourageLIVES executive director] Carey Nason, who has been tremendous. The Holy Spirit is in here, through and through.

We see the Holy Spirit working in the women in the program. I don't know if they would say it's the Holy Spirit, but we certainly see God working in them. They love it when I say, "I'm praying for you." They may not talk about God, but they know God is on their side with the sisters' prayers.

Editor's note: Join Global Sisters Report on Jan. 19, 2021, as we facilitate a conversation with Comboni Sr. Gabriella Bottani and Divine Savior Sr. Jean Schafer on sisters' anti-trafficking efforts worldwide in preparation for the International Day of Prayer and Awareness Against Human Trafficking. Click here to register for the Witness & Grace program.