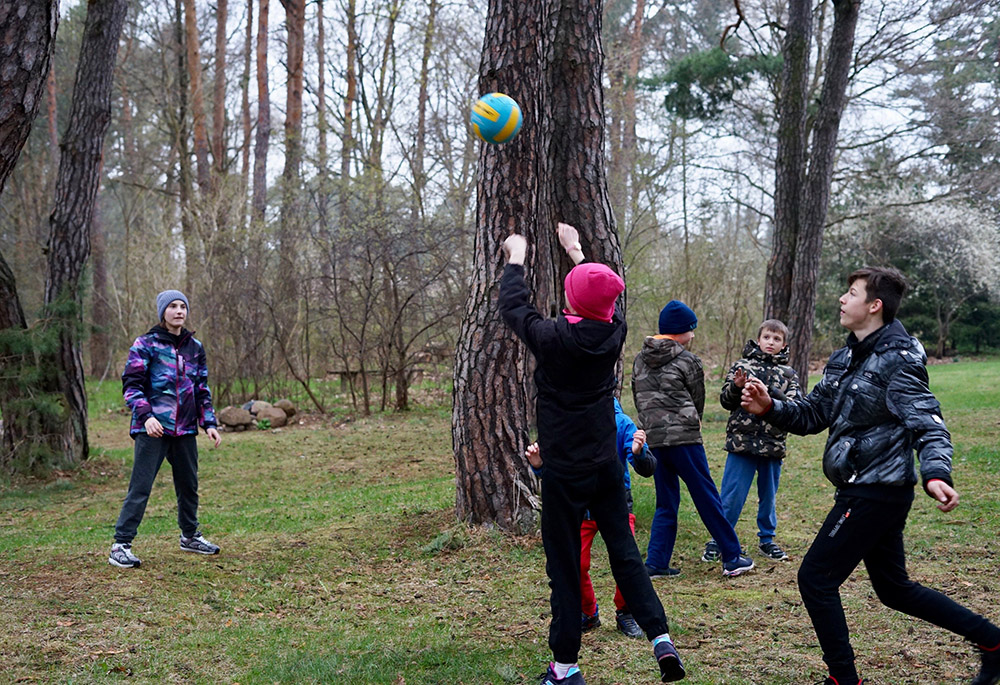 Ukrainian children from a group home for orphans in Zhytomyr, Ukraine, play in the yard of the motherhouse of the Congregation of the Sisters of the Angels April 20 in Konstancin-Jeziorna, Poland. Two sisters from the congregation ran the home in Ukraine and were invited to bring them to the motherhouse when Russia invaded the country. (CNS/Adrian Kowalewski)

The International Union of Superiors General has begun distributing a $1 million grant by the Conrad N. Hilton Foundation to assist women's religious communities in eastern Europe which are providing accommodations and care for refugees who have fled the war in Ukraine.

"This unprecedented emergency calls for an immediate response," said Sr. Patricia Murray, the executive secretary of UISG and a member of the Institute of the Blessed Virgin Mary, also known as the Loreto Sisters.

The International Union of Superiors General had distributed US $214,250 (€203,000) in grants as of April 22. It has distributed application forms to congregations which have communities in Ukraine, Poland, Hungary, Romania and Slovakia, among other countries.

"We know that many agencies are reaching out in different ways but we feel that we can support sisters who are opening their homes, their communities to welcome the many refugees who are in transit and others who need a place to stay until they are able to return home," Murray said.

"We are proud to partner with the International Union of Superiors General to support Catholic sisters who are giving care, essential products, and accompaniment to displaced children, youth, and families from Ukraine, said Sr. Jane Wakahiu, the Hilton Foundation's associate vice president for program operations and head of its Catholic Sisters Initiative. Wakahiu is a member of the Little Sisters of St. Francis. (The Hilton Foundation is a major funder of Global Sisters Report.)

Religious communities throughout Eastern Europe are housing families — mainly women and their children — as well as others who have arrived since the war started Feb. 24. This includes elderly persons, children with disabilities and children from orphanages, UISG said. As of May 3, more than 5.6 million refugees have fled Ukraine, said UNHCR, the United Nations' refugee agency. Of that total, 3,075,240 refugees have arrived in Poland, according to UNHCR.

The recent refugees are staying with sisters while determining where to go next. Many are en route to stay with family or friends elsewhere in Europe or in other locales.

Murray noted that many religious are also buying and transporting food and medicines into Ukraine to the elderly and those unable to leave or who do not want to leave their homes.

Murray cited the encyclical Fratelli Tutti in discussing the support being funded.

"I was struck by one of the opening sections which is titled 'Without Borders.' Here Pope Francis speaks about the openness of heart which St. Francis experienced from the Sultan Malik-el-Kamil in Egypt," she said.

"Despite differences of language, culture and religion they were able to connect across borders," Murray said. "Now we too, in these dark days of war, are being called to reach out in hospitality and welcome those who seek refuge and safety. This is part of our charism as religious and so at UISG we are privileged to support those most in need, through the goodness of others."

In a May 2 interview with GSR during the UISG plenary in Rome, Sr. Jolanta Kafka, UISG president and general superior of the Claretian Missionary Sisters, said the grants are an example of an almost unprecedented show of international solidarity to help Ukrainian refugees who have fled their country in the wake of the Russian invasion.

There is some built-in flexibility with the grant monies, Kafka said. Providing food is an obvious priority, she said, but the refugees also need assistance with communication needs like telephones and SIM cards, as they try to remain in touch with family back in Ukraine.

"There is great trauma for these people," said Kafka, who is Polish. Poland has been praised for its expansive welcome to the refugees, including the welcome being provided by sister congregations, which is allowing the arrivals to stay in monasteries and convents.

But Kafka acknowledged that the flow of refugees into Poland and other neighboring countries is burdening those countries and that the war's long-term humanitarian implications for the region will be felt for some time. "We are pained by what is happening in the world."

This story appears in the War in Ukraine and UISG 2022 plenary feature series.