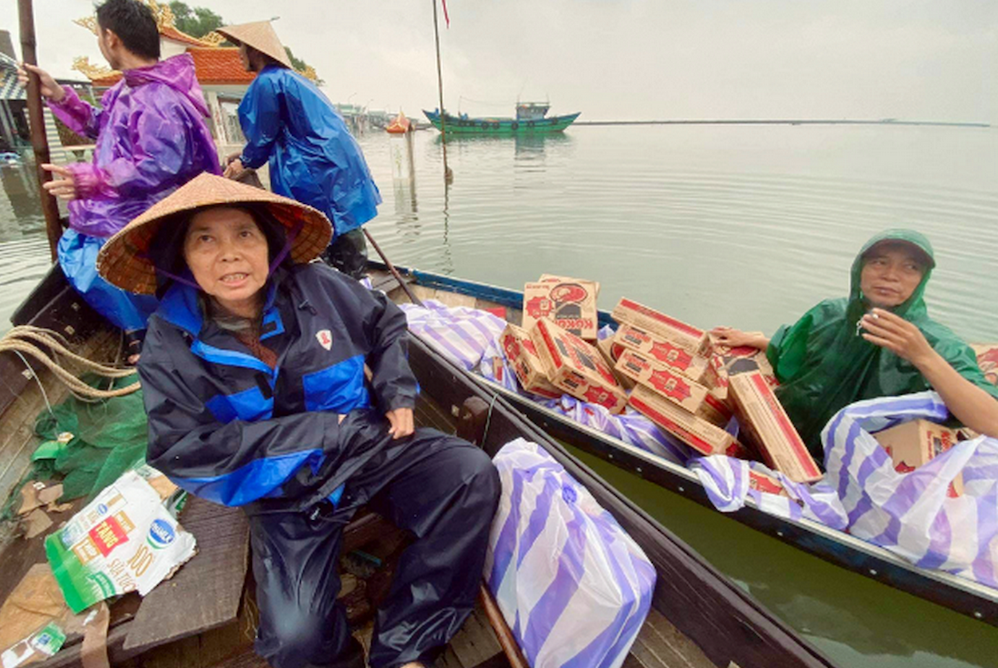 Nuns from four congregations in Vietnam's central provinces that are being hit by the worst floods in decades are providing emergency aid for hundreds of thousands of victims.

Landslides and widespread deadly floods triggered by persistent torrential rains and four tropical storms since Oct. 6 have left at least 130 dead and 20 missing, the Central Steering Committee for Natural Disaster Prevention and Control reported on Oct. 27.

State-run news organization Tuoitre reported on Oct. 27 that the government evacuated about 1.28 million people in seven central provinces to avoid the impact of Typhoon Molave, the country's ninth storm this year, which lashed the region on Oct. 28. The Central Steering Committee for Natural Disaster Prevention and Control said Oct. 30 that the most powerful storm in the past 20 years battered the region and caused many landslides, killing at least 23 people, leaving 47 people missing, and injuring 45 others. At least 97,500 houses collapsed or were damaged and some 5,500 hectares of crops were ruined.

The Southeast Asian country usually suffers flooding from about a dozen storms per year due to its long coastline. In 2019, natural disasters left 133 dead or missing and 183 injured in Vietnam, according to the Central Steering Committee for Natural Disaster Prevention and Control's statistics.

Vietnamese congregations of women religious are well-prepared to help flood victims, though these storms are the worst in decades. Daughters of Our Lady of the Visitation Sr. Anne Nguyen Thi Duong said four sisters and three lay volunteers used boats to visit and give instant noodles and bottled water to hundreds of people from Quang Thanh Commune in Quang Dien district of Thua Thien Hue province. Their houses and local paths were inundated and they could not move to other places. Most of them are not Catholics themselves but Buddhists or followers of other faiths.

"We have visited them every three days since Oct. 10. We recited rosaries praying to God to protect us while we were sailing boats through dangerous floodwaters," Duong, 34, said.

She said on Oct. 25 when flood waters subsided, the nuns gathered victims at a local elementary school and offered them rice, drinking water, canned fish and money so that they could buy more basic needs.

Duong said the nuns are asking benefactors to donate money to 250 families so that they can buy rice seeds, chicken and piglets to grow. Victims also will be given rice in the five coming months until they harvest crops in March.

Le Thi Cam, 57, said floodwater rose fast at night and power ran out so her family members didn't have enough time to move 100 chickens and over a ton of rice to higher places. Her house was one meter (3 feet) deep in water. 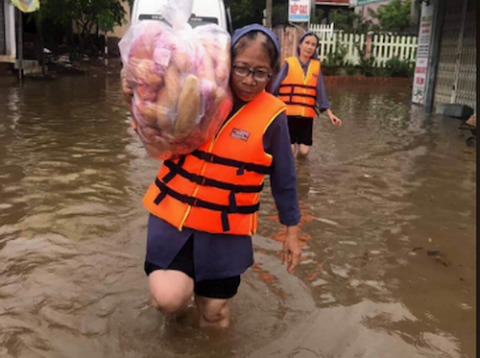 "We have nothing left after one night. We do not know how to live in the future," the mother of two said, adding that they are living on food supplies from nuns and other Catholics.

She said her yard and roads are still inundated by floodwater.

The farmer said they are lucky to survive during the massive floods. Others lost relatives, as well as houses and all their crops.

She said on Oct. 12, a man from the nearby district of Phong Dien saw his pregnant wife carried away by floodwaters while they were on the way for her to give birth at a local hospital which is only 2 kilometers from their home. Rescue workers found her body later that day. She left two children ages 10 and 12.

Daughters of Mary of the Immaculate Conception Sr. Maria Nguyen Thien Sa said Oct. 25 that five nuns carried one ton of rice on boats to give 500 people on the 24.6-hectare islet of Con Hen in Huong River.

"Local people have lost their poultry and furniture and became jobless due to the lingering floods, so we have to feed them and call on benefactors to help them overcome the hard time," Sa said. Local people here usually catch fish and clams and make leaf hats for a living.

Her community is based at Tan Thuy Parish in Hue City. 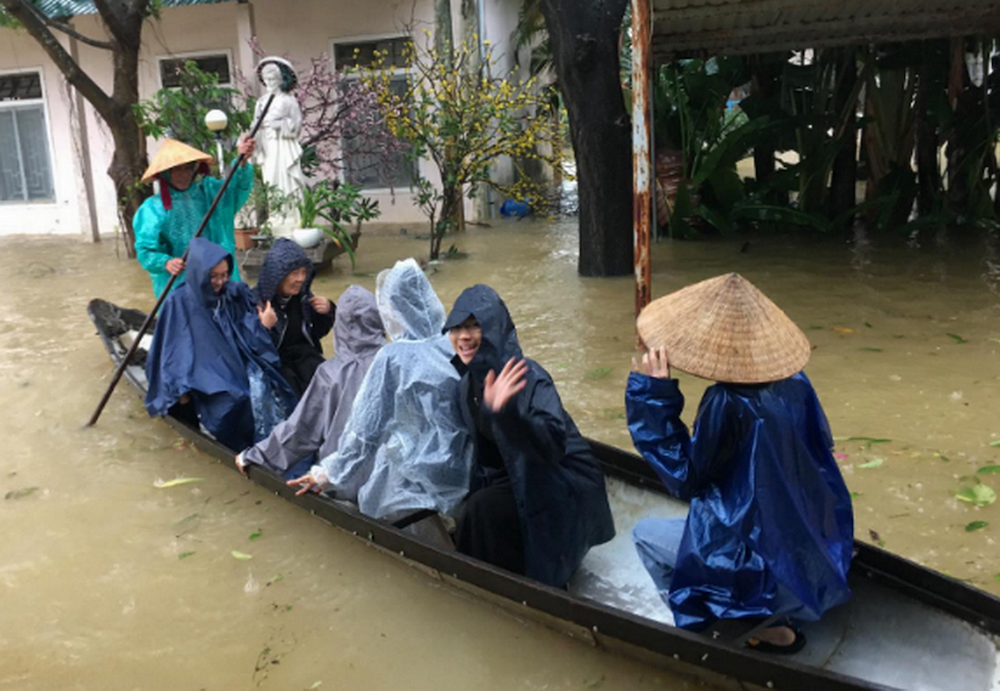 Daughters of Mary of the Immaculate Conception nuns take a boat to visit people in Con Hen islet in Huong River on Oct. 25. (Joachim Pham)

Thuy said on Oct. 20 she and two other sisters also consoled Doan Thanh Thiet, whose wife died of appendicitis on Oct. 12. Thiet, 45, carried his wife on his back on a long, flooded path and called a boat to take her to Hue Hospital. She died from exhaustion upon arriving at the hospital. He works as a tricycle rider for a living and his wife had sold lottery tickets.

The nun said they plan to provide money to some families to buy boats and raise fish on farms for a living. 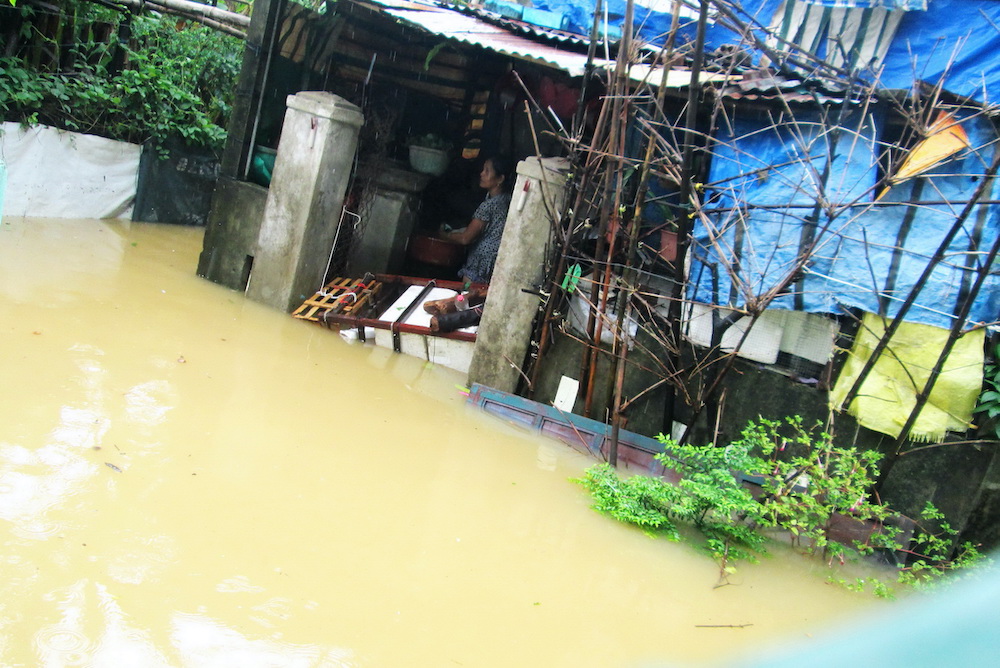 Hien, 59, said the devastating floods and massive landslides swept away all their animals, destroyed 20 houses and blocked roads. "Many people have to stay in stone caves, suffer coldness and hunger, and eat only vegetables and fruits found in forests," the nun said.

She said the nuns used canoes to offer bread they made at night to 3,000 people including patients at local hospitals, making many trips since the effort began Oct. 9. Another 800 households were also each given 10 kilograms of rice, one pack of instant noodles and bottled water.

Saint Paul de Chartes Sister Catherine Doan Thi Thuy said her community, based in Ha Tinh Province, have visited three times and given food to a total of 450 people in the provinces of Quang Binh and Quang Tri since Oct. 20. "We cooked food by ourselves and offered the victims who sat on their roofs and ate instant noodles for days to survive," she said.

Thuy said now they no longer suffer starvation but need money to repair houses, cover medical checkups, buy seeds, seedlings, animals and tools to cultivate crops and get back to work making a living.

She said the nuns plan to visit and give gifts to people in Cam Xuyen District on Oct. 31.

She said she called on all her friends and benefactors to make donations to the flood victims. "We try to do something helpful for our brothers and sisters in need in this difficult time," Thuy said. 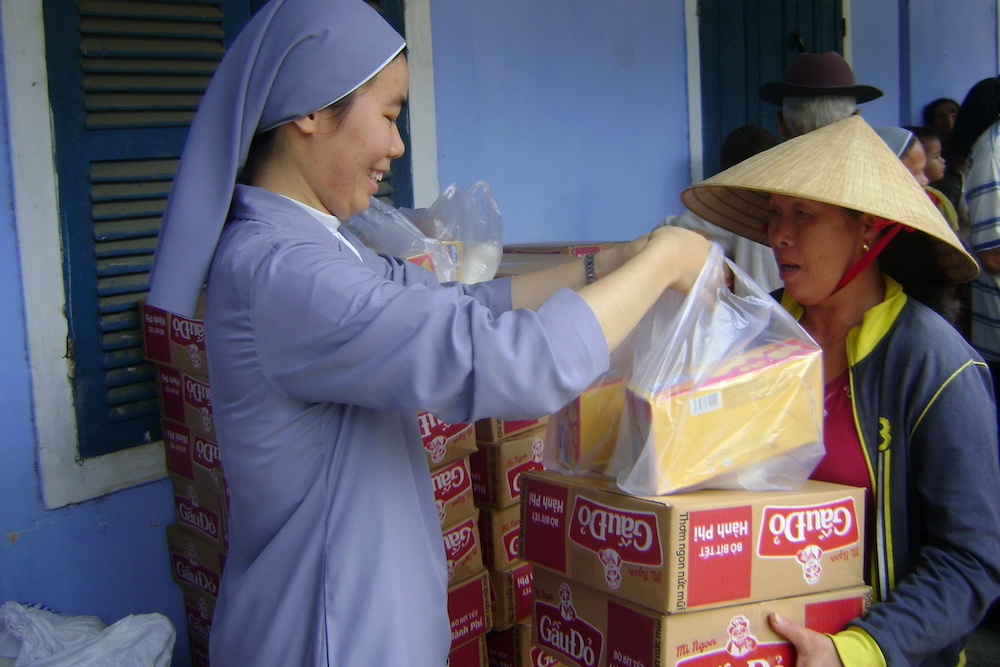