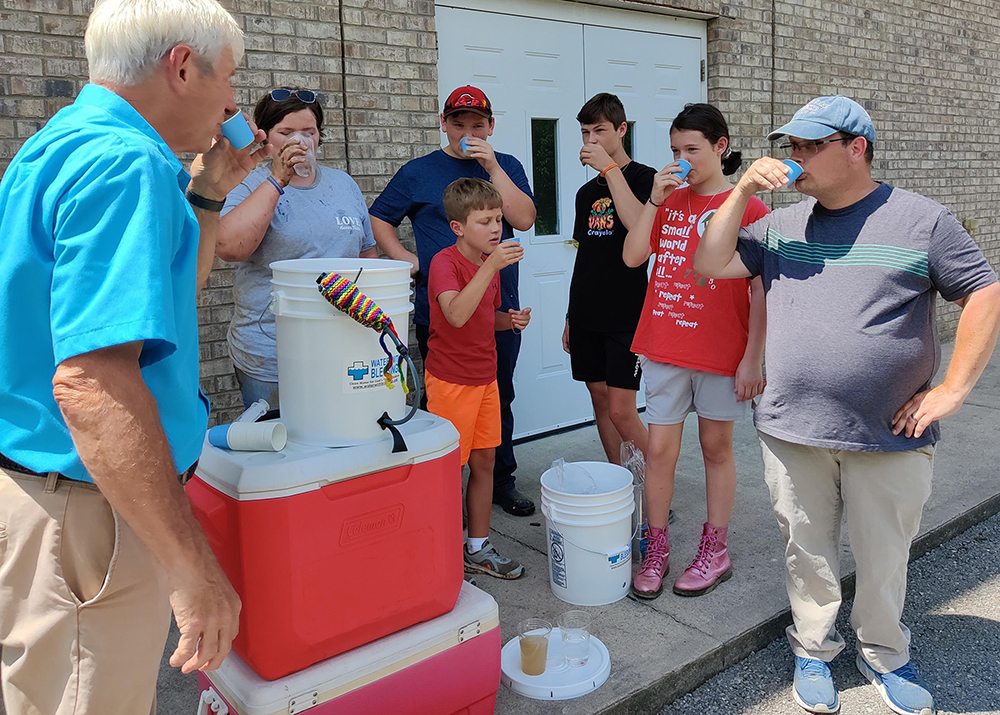 Arnie LeMay of Water With Blessings, left, drinks a cup of filtered creek water Aug. 9 in Chavies, Kentucky, after demonstrating the Sawyer PointONE water filter to volunteers at First Church of God. (CNS/Handout via The Record)

Kassi Marshall, a physician, mother and member of the First Church of God in Chavies, Kentucky, is on a mission to bring safe drinking water to Perry County, where parts of the water infrastructure were destroyed in flooding that began July 26 in eastern Kentucky.

"People need water," she said in an emotional phone interview Aug. 8. "We grow accustomed to the things we like — niceties and not necessities. But life is not sustainable without water. It's impossible to be healthy when you're relying on a contaminated water source."

In "Perry County alone, the infrastructure has been destroyed and it may be months before many areas have water restored," she told The Record, newspaper of the Archdiocese of Louisville. "I'm really concerned."

Through a series of events that she finds providential, both she and her pastor, Br. Brian Bridges, were connected recently to the Louisville-based Water With Blessings, run by Sr. Larraine Lauter, an Ursuline Sister of Mount St. Joseph, Kentucky.

The organization distributes water filters — and trains people to use them for a lifetime — around the globe where communities lack access to safe drinking water.

Lauter said she is ready to "go big" in Perry County, which is in the neighboring Diocese of Lexington, where several counties were ravaged by the floods.

"They have water that is bio-contaminated," Lauter said. "That can take them down health-wise."

"This is something we have to do in an organized, strategic way," she said of mobilizing an effort to aid Perry County. "We don't pick out a lucky few. We have to make a plan for the entire community."

Water With Blessings is partnering with the Chavies First Church of God — and anyone else who'd like to help — to initially provide filters for 2,500 households in Perry County, home to about 11,000 households.

The manufacturer of the Sawyer PointONE water filters has offered a discount, enabling Water With Blessings to provide each filter, plus distribution and training, for $35 each.

People have to be trained to use and care for the filter for it to be effective in years to come, Lauter said.

Future use also is part of the long-term plan.

She and members of the Diocese of Lexington's Laudato Si' Commission, which addresses care for creation issues, already were planning a project to get water filters to people in remote areas of eastern Kentucky in advance of the next flooding event.

She envisioned a plan to get filters embedded into communities that are prone to natural disasters, such as flooding, so that the next time a disaster comes, families have safe drinking water at their fingertips.

The filters also prevent excessive reliance on bottled water, which has been shipped, airlifted and even delivered on horseback to remote homes in the flood zones, Marshall noted.

A plan like this gives Marshall hope, she said through tears, as she described the potential benefits for her community.

"This is like a lifeline for so many people, not just today, but in the future. This provides safe water and safer water than you had before," she said, noting that both the city and well water available in the area were not as safe as the filtered water prior to the flood. 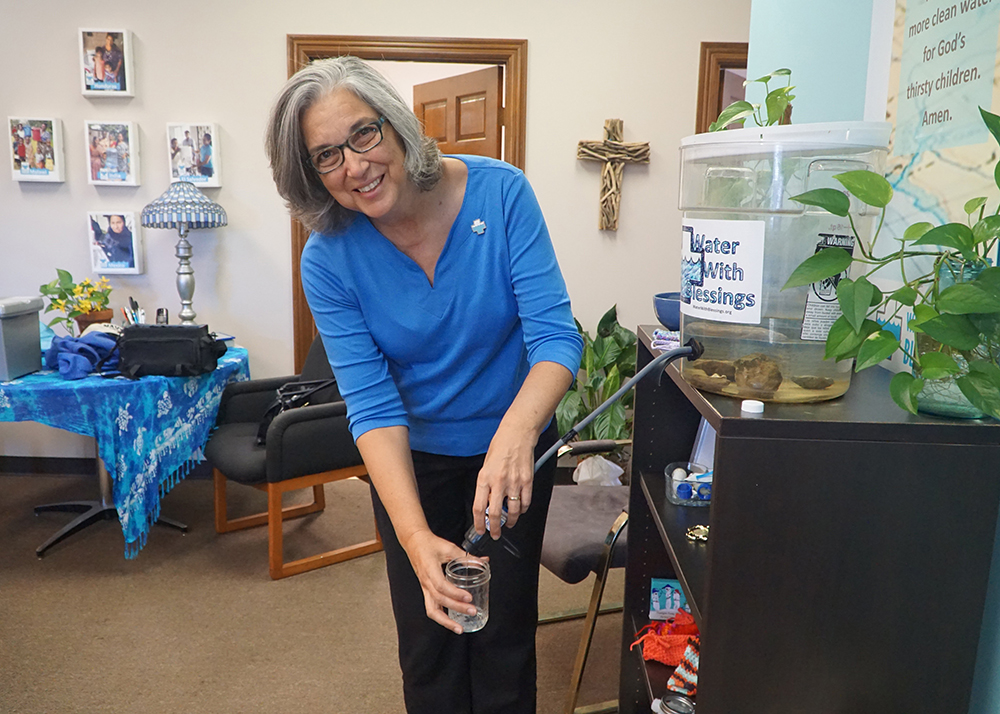 "I see the economic burden of all this plastic — and we are so thankful [for it], we couldn't have survived without that generosity," Marshall told The Record. "But it is so expensive to transport — boats, helicopter and horseback. These pallets are difficult to transport."

"We can have safe water that doesn't have to be transported to people," she said, adding that Perry County has dozens of inaccessible bridges and roads.

She, Bridges, and her family were trained to use the filters Aug. 9, and they planned to start distributing the first filters during the week. As more can be purchased, Chavies First Church of God will be the distribution site.

"God is sending us the resources and teaching us and allowing us to be a small part of this," she said. "We are ready, we are excited. It's amazing how God is working among the communities."

Water With Blessings has provided the Sawyer PointONE water filters to developing countries and disaster-affected communities since 2008.

The effort began when Lauter and co-founder Arnie LeMay noticed on medical mission trips that they kept seeing the same people with preventable water-borne illnesses. They decided to tackle the root of the problem and help communities access safe water.

Lauter said the latest effort is focused on Perry County, but it's not limited to that area.