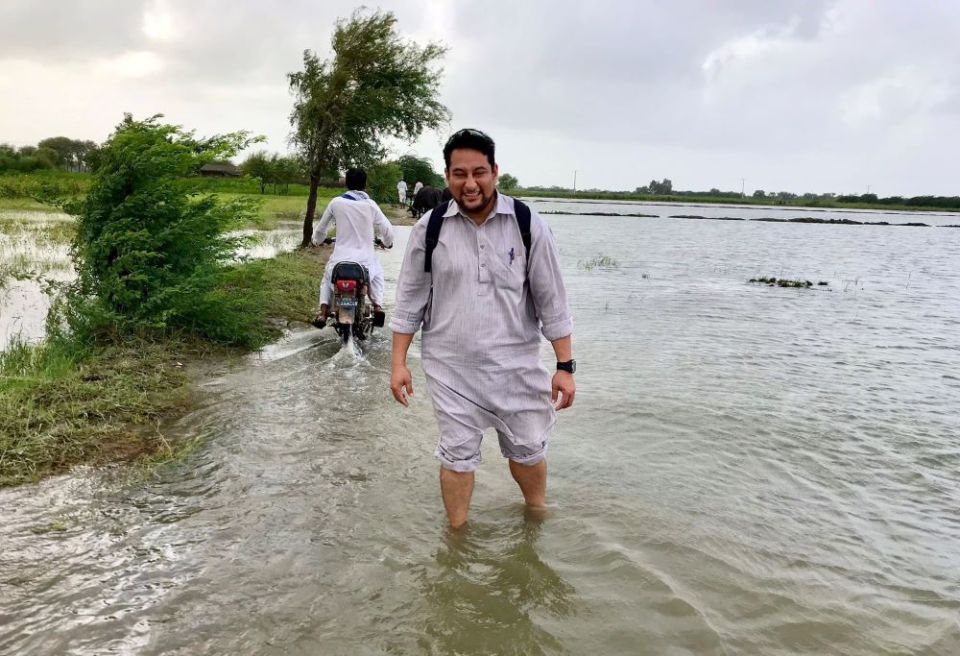 Lahore, Pakistan — Catholic nuns across the country are responding to humanitarian needs and supporting the bishops' donation drive to support millions of people affected by unprecedented torrential rains that have killed more than 1,300 people and injured at least 12,500 more since mid-June.

The country's six bishops and one cardinal have called for the joint effort to cope with the aftermath of the worst weather disaster in a decade, one that has damaged homes and health care facilities, sent 634,000 displaced people to camps, and put more than 6.4 million people in dire need of humanitarian aid, according to the World Health Organization.

People in Pakistan's southern Sindh province face yet more devastation after record flooding since has submerged a third of the country, according to images from the European Space Agency on Aug. 30.

Officials at the Pakistan Meteorological Department said the country saw its wettest July since 1961, exceeding the total normal monsoon rainfall by about 26%. On July 5, the province of Balochistan's government declared Quetta a disaster-struck area and imposed a state of emergency in the provincial capital, after rain wreaked havoc in the province bordering Iran and Afghanistan.

During the July to August monsoon season, the southern province of Sindh received the heaviest rainfall in the country, with 1,540 mm (61 inches) in the town of Padidan in the Sindh province. Marriyum Aurangzeb, minister for information and broadcasting, declared the country's flooding a national emergency in an Aug. 25 statement. 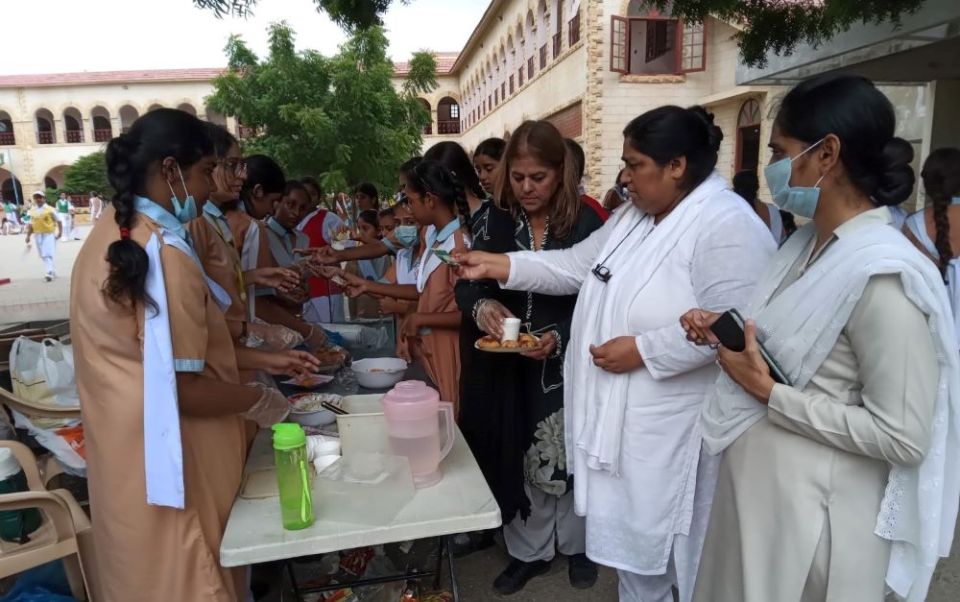 Daughter of the Cross Sr. Elizabeth Niamat (second from right) works at a Sept. 1 bake sale raising funds for the flood victims. She has encouraged families and school staff to donate to a fund to help people affected by the floods. (Courtesy of Elizabeth Niamat)

Pakistan's Catholic sisters are responding to the flood's devastation, offering financial and material support to people whose families, homes and livelihoods have been affected by the catastrophic floods. In the southern Archdiocese of Karachi, Daughter of the Cross Sr. Elizabeth Niamat organized a charity bake sale at St. Joseph's Convent School for flood victims.

On Aug. 29, Niamat sent a letter to the parents of her 2,000 students, urging them to donate at least 1,000 rupees ($4.56). More than 200 staff, including nuns, have also agreed to donate a day's salary, about 250,000 rupees total ($1,090). The goal is at least 2 million rupees, she told Global Sisters Report, adding that students will accompany her in distributing dry rations and juice to villagers. 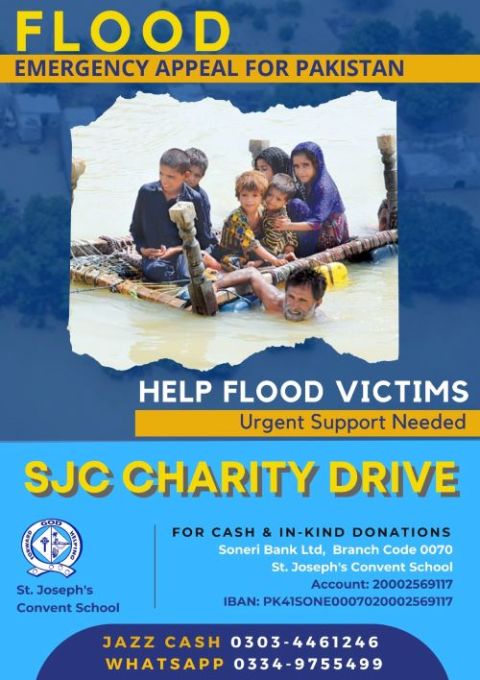 The campaign is "meant for the awareness of what our countrymen are going through," she said, noting that details can be found on the school's Facebook page.

Also responding to catastrophe are the Franciscan Missionaries of Mary, who have distributed 55 food packages among Muslims, Christians and Hindus in the Sindh city of Tando Adam. On Sept. 3, Franciscan Missionary of Mary Sr. Iffat Inayat, principal of St. Mary's School, and her staff accompanied Fr. Shahzad Khokher in distributing cash support among houseless survivors.

A pattern of deadly floods

Deadly floods are an annual occurrence during the monsoon season in Pakistan, ranked as the eighth most vulnerable country to climate change, according to the Global Climate Risk Index.

"While climate change is a major factor, the authorities did not implement the lessons learned from the super floods of 2010, when approximately one-fifth of total land area was affected by floods," said Amjad Gulzar, executive director of Caritas Pakistan.

"Out of 160 districts in the country, 116 districts have been affected, as 3.1 million people are struggling to cope with the floods, particularly in Balochistan and southern Sindh provinces, leaving many villages submerged or destroyed," he said.

In May, much of the nation experienced a drought and heat wave, with temperatures hitting 51 degrees Celsius (124 Fahrenheit) in Jacobabad, Sindh. Rising global temperatures linked to climate change caused glaciers to melt rapidly, creating thousands of glacial lakes.

Outside the polar regions, Pakistan has more than 7,000 glaciers, the most on Earth. The country's chief meteorologist warned that this year alone, Pakistan has seen triple the usual amount of water released from glacier melt, with glacier melt one of the clearest, most visible signs of the climate crisis and one of its most direct consequences. 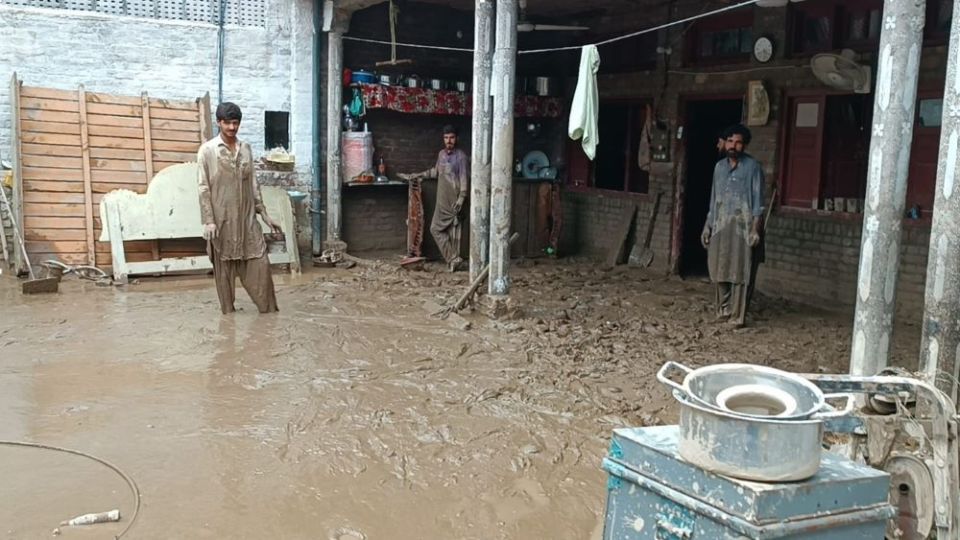 Mohammad Zahid (right) and his brothers look at his house in northern Pakistan's Swat Valley. "Within seconds, we were submerged in 4 to 5 feet of water," Zahid said. "I had to break the walls with a hammer to evacuate the family." (Courtesy of Amjad Gulzar)

According to Sardar Sarfaraz of Pakistan's Meterological Department, 2022 has experienced three times as many glacier melts in the country's northern Gilgit-Baltistan region compared to previous years. The current floods have inundated homes and swept away roads and bridges.

The high court of Sindh cites a lack of a properly functioning drainage system for urban flooding. Opposition parties, however, blame the incompetence of provincial government for rural flooding.

Five families were each given 10,000 rupees ($48), Safaraz said, noting that the disbursal was a combined effort between sisters and the St. Joseph parish.

In the eastern Archdiocese of Lahore, Sisters of Charity of St. Jeanne-Antide Thouret plan to distribute relief items collected at St. Jeanne-Antide Bible High School to army officials in the city of Shahdara.

"The army officials have agreed to collect the bedding, grocery and food items from the school and distribute it in flooded areas," said Charity Sr. Zareena Hadayat, a teacher. "More than 700 students have been requested to join hands and generously donate to help alleviate the pain and sufferings of those in need."

Meanwhile, prayers are being offered around the country. Archbishop Sebastian Shaw of Lahore concluded Aug. 28 Sunday Mass at Sacred Heart Cathedral by dedicating a week to prayer and donations for flood survivors.

"Let us help those affected in these difficult times," he said, calling for donations of food rations and money. "People are left without food, their jobs and homes amid record inflation."

Bishop Samson Shukardin of Hyderabad, the country' worst affected diocese, shared the bank details of the southern diocese on social media "to help the distraught people in the monstrous monsoons," he said.

"We are getting requests from all the 16 parishes, but we have limited resources. The survivors need mosquito nets and dry rations. Several villagers have caught fever with congested chest and throat. Sadly, Christians are generally ignored in such relief activities,” he said, adding that multiple churches in the country have been damaged.

The prelate was referring to reports of welfare trusts skipping Hindu and Christian families in their door-to door-distributions during COVID-19 lockdown in the Islamic republic. Christians account for roughly 1% of Pakistan's population, with 60% living below the poverty line.

According to Munawar Samuel, the agriculture state manager of the Hyderabad Diocese, continuous rainfall Aug. 17-19 destroyed 80 acres of diocesan-owned farmlands in the Sanghar district and 226 acres Padri Jo Goth, a Christian village also in the province of Sindh.

"The cotton crop was ready. The rain came after two rounds of harvest. The damage is in the millions. Many Christian farmers, who purchased costly fertilizers, have come under debt. Two weeks of continuous power cuts worsened the situation," said Samuel, whose 80 acres of cotton crop was also destroyed at Padri Jo Goth.

"The government has done nothing except an anti-mosquito spray in our village,” he continued. “The local parliamentarians are only visiting us for photo sessions. The rich waderas [landlords] have helped the poor and widows."

In an Aug. 28 press release, Archbishop Joseph Arshad of Islamabad-Rawalpindi appealed to the nation to express solidarity with the flood victims and stressed the need for timely assistance.

"Millions of people are enduring the hardships of life under the open sky," Arshad, president of the Pakistan Catholic Bishops Conference, said in the press release. "It is the duty of every Pakistani, including the Christian community, to provide them practical assistance in helping the flood victims in the hour of suffering and distress. May God Almighty give patience and perseverance to our beloved country."

'It's a dire situation'

On Aug. 27, Caritas Pakistan, the Diocese of Islamabad-Rawalpindi and Catholic Charities staff visited the northern Pakistan's Swat Valley, where district administration has declared all hotels to be relief centers for the stranded tourists.

"We were sleeping when the water entered the house suddenly," said Mohammad Zahid, a local Pathan (an Iranian ethnic group).

"Within seconds, we were submerged in 4 to 5 feet of water," he said, standing in the ankle-deep mud in the compound of his damaged house. "I had to break the walls with a hammer to evacuate the family. All the dowry we organized for [my sister's] wedding [this month] is either covered in deluge or swept away."

"The women and children now live with relatives as [the] flood-affected are living hungry in government camps," he said, referring to the many displaced people. "I often visit my flooded house as some people are taking this opportunity to loot abandoned houses." 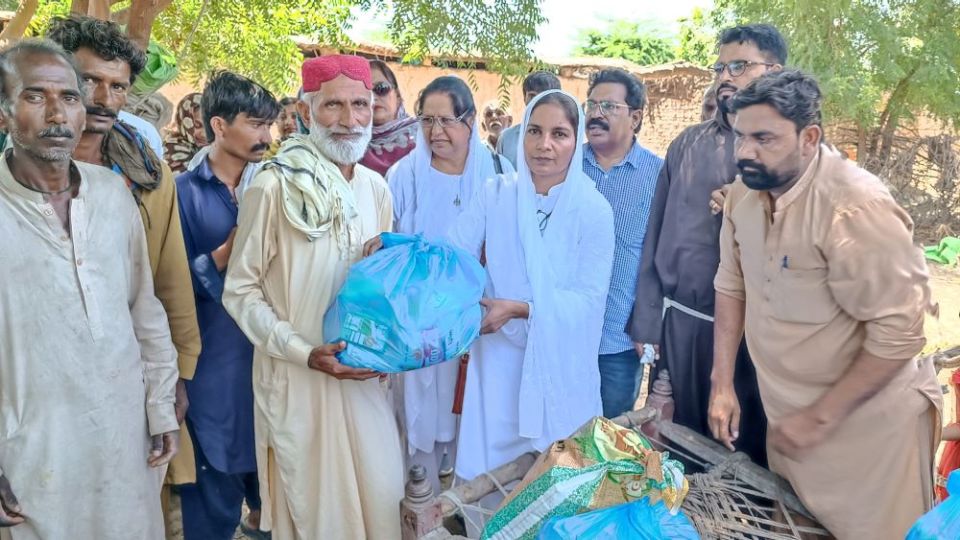 Karachi's Archbishop Benny Travas, chairman of Caritas Pakistan, has urged the Catholic charity to reach out to those affected as quickly as possible.

"We are requesting with the great hope to extend solidarity and cooperation for assisting the flood affected communities," he said.

Through its rapid response appeal launched July 26, Caritas Pakistan has reached about 2,000 families affected by the flood, providing them cooked food and safe drinking water.

Meanwhile, Fr. Liam O'Callaghan, national coordinator for the Justice, Peace and Integrity of Creation office of Hyderabad Diocese, awaits help from Caritas and other charities.

"Church teams are trying to assess the situation and what response can be made to help people stranded," the Irish priest said. "Some are receiving food rations, but the housing needs will take longer to determine," noting that the diocese, in contact with parishes, is determining the level of damage and the needs of the locals.

For example, the Columban-run parish of Badin, about 100 kilometers (62 miles) southeast of Hyderabad, has experienced substantial damage. They've found that 100 families in that parish — home to nomadic tribes and the Punjabi community — are suddenly unemployed and need food.

"It is a dire situation," he said. "The rehabilitation work will need more planning and time."

Kamran Chaudhry is a correspondent for Union of Catholic Asian News (UCAN) and Aid to the Church in Need-USA.

As a chapter ends, it's a gift to be part of a larger story