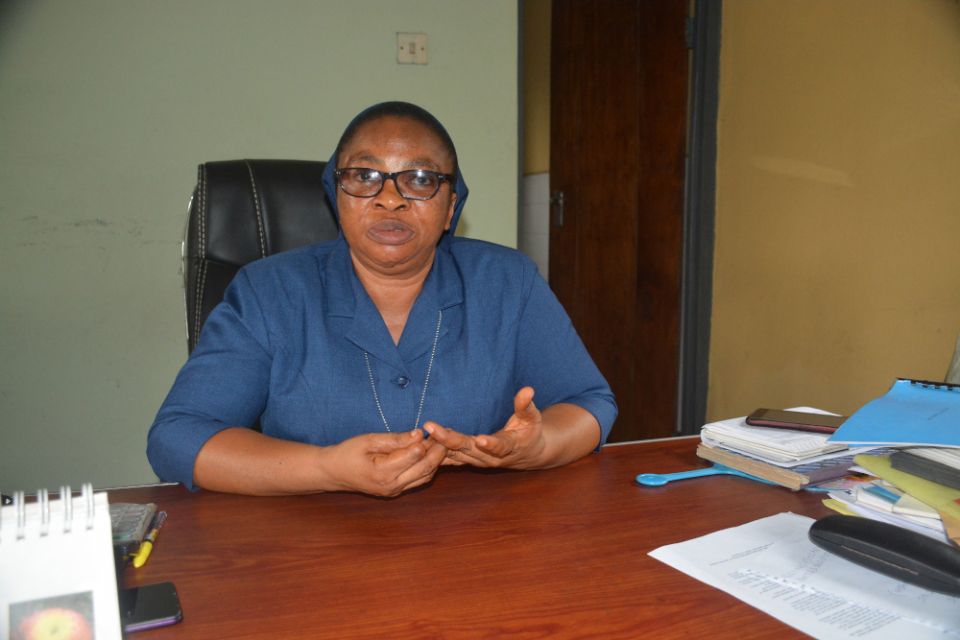 Sr. Pauline Ekanem, a member of the Daughters of Charity of St. Vincent de Paul, is seen at the order's Marian Home. The congregation has been taking care of tuberculosis, leprosy and HIV/AIDs patients in Nigeria. (CNS/Valentine Iwenwanne)

Eleme, Nigeria — After three years of visiting clinics and traditional healers across Nonwa Tai, in the southern corner of Nigeria, 55-year-old Benedict Ngbaji was shocked to discover the sores and lesions under his foot and ankle were symptoms of Hansen's disease, or leprosy.

By the time Ngbaji found out about the Daughters of Charity of St. Vincent de Paul's apostolate of social services, his right leg was already deformed, and he had lost his only means of livelihood, farming.

"Knowing that I am suffering from leprosy and unable to go about my normal life is just too painful for me to bear. My farmlands have turned to bushes and I cannot do anything about it," Ngbaji told Catholic News Service.

"It started in 2003 as mere patches of skin with decreased sensation in my right leg," he said.

"I really don't wish anyone close to me to experience this. Not even my enemy," Ngbaji said as he adjusted his stick.

Ngbaji is helped by the Daughters of Charity of St. Vincent de Paul, who have worked in Nigeria since 1963. In Rivers state, the sisters have three different apostolates — social services, mental health and education.

Sr. Pauline Ekanem runs the social service unit of the religious sisters. For the past 13 months, Ekanem has been offering an awareness campaign and sensitization to people suffering from tuberculosis, leprosy and HIV about hygiene and habits that could predispose them to health dangers in their communities.

She takes her life in her hands when she and her team go into communities in her Toyota Hilux truck every week.

"Even though my team and I are prone to contacting any of these airborne diseases, we still go all out to talk to people in villages, churches, schools and markets. This is what I live for; I feel fulfilled and happy to help them get the right education and treatments," Ekanem told CNS.

Nigeria has seen an increase in the rates of tuberculosis and Hansen's disease. Late diagnosis and lack of effective tools for prevention and treatment have contributed to the lack of an effective model to predict their spread. Most people simply cannot afford the high cost of treatment, especially those in far-to-reach communities, where access to a formal health center and medical doctors are limited, causing the diseases to be endemic.

"We usually tell them to visit the nearest health center if they cough for more than two weeks for TB diagnosis. But many of them complain of shortage of funds for transportation and feeding," Ekanem told CNS.

She said people in villages are more vulnerable because they do not have access to television, radio or mobile phones, to either watch or listen to educative programs.

"This is why we prioritize our sensitization campaigns in these areas," she said, adding, "There is no way we can talk about TB that we won't also talk about leprosy."

The apostolate teaches those with the disease to cover the mouth and nose while coughing or sneezing, to avoid infecting others around them with TB, and also educates them about proper hand washing before eating. Patients receive a follow-up on a weekly basis.

They also offer a handful of other health interventions like testing and treatment to the growing number of people living with HIV. In a situation where patients and their families suffer from stigmatization, they offer rehabilitation services using HIV-education programs, sensitization and anti-stigmatization programs and counseling to help them regain their self-esteem.

With help from international donors, in the first three months of 2020 the sisters supported 85 leprosy patients and about 100 TB sufferers with funds, treatment and relief packages.

Beyond offering economic integration for sick people, the sisters provide financial support to those who lack shelter.

In 2018 for instance, the sisters offered financial support to Maria Eene, a leprosy patient, to complete her three-bedroom apartment and also supported her with a sewing machine, so she could restart her life.

Sisters adapt to COVID-19 pandemic amid nationwide lockdown in India

Sisters give care to needy in Bethlehem

This moment calls for a new consciousness: becoming an anti-racist

Those who accompany the dying inspired by 'Samaritanus bonus'