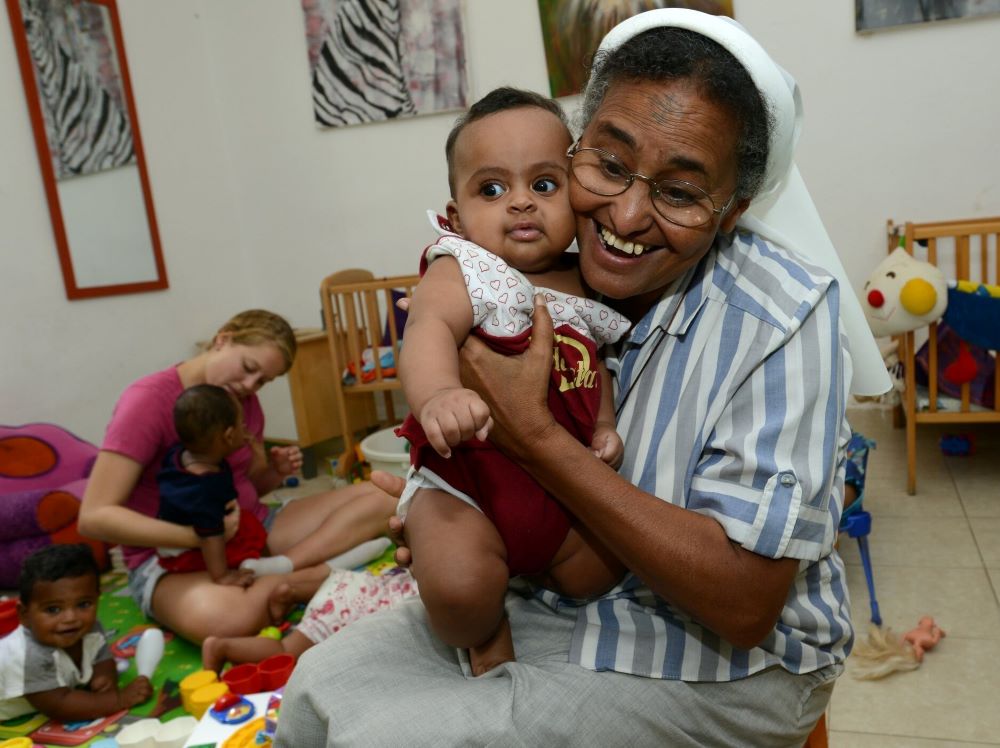 A nun is pictured in a file photo embracing a child in a nursery school at a shelter in Tel Aviv, Israel. The International Union of Superiors General in 2020 launched the global initiative Catholic Care for Children International to support family- and community-based care for children. (CNS/Debbie Hill)

Catholic Care for Children International, a global initiative to reform the way women and men religious care for orphaned or abandoned children, will hold its first in-person meeting of international partners.

CCCI was founded in 2020 by the International Union of Superiors General. The Nov. 28-Dec. 3 meeting in Rome will address a range of topics, all focused on moving away from institutional care of children toward family- and community-based care.

The core group of partners is from Uganda, Kenya and Zambia, as the reforms made there inspired the international effort by UISG. CCCI started in 2016 in Uganda, when an alarming increase in the number of institutionalized children sparked government legislation favoring family- and community-based care. The Association of Religious in Uganda responded by launching Catholic Care for Children in Uganda to help the Catholic community pivot away from institutional care, according to the CCCI website.

The meeting in Rome will include the core partners, as well as those from South Africa, Malawi and Sri Lanka. Partners provide care in more than 200 locations.

Immaculate Heart of Mary Sr. Maxine Kollasch — who has been working with CCCI as a consultant for about a year — said the attendees will meet with several Vatican officials, including the secretary of the Pontifical Commission for the Protection of Minors. Congregation of Our Lady of Charity of the Good Shepherd Sr. Niluka Perera, coordinator of CCCI, was appointed to the commission Sept. 30.

Kollasch said much of the meeting will entail the partners sharing updates on their progress in implementing new models of care. Officials say the efforts are informed by the latest research in the social sciences and aligned with the United Nations Convention on the Rights of the Child, which recognizes a child’s right to grow up in a nurturing family environment.

Millions of children worldwide live in institutions. CCCI officials say 80 percent of them have a parent or close relative, but are placed there because of poverty.

"No child should live in an institution because the family is poor or overwhelmed by the difficulty of accessing basic health services, social protection, or education for their child," Perera said in a statement announcing CCCI's new website, adding that the site will enable sisters and religious institutes to easily share resources with each other, the public, and the variety of organizations involved in the global care movement.

According to the website, the initiative includes 116 communities of women religious and has already moved 2,544 children from living in an institution to living with a family.

Berenice died at age 95 in 1993 in Medellín, Colombia, where she did most her work, La Prensa said. Her beatification process began in 2002. She entered the Dominican Sisters of the Presentation in 1917, when she was 19, and in 1943 established a new congregation, the Little Sisters of the Annunciation, which is active in 15 countries.

Cardinal Marcello Semeraro, the prefect of the Congregation for the Causes of Saints, officiated at the beatification ceremony at the Metropolitan Cathedral in Medellín.

"Our blessed lady overcame many trials, challenges and misunderstandings following the good example of the Virgin Mary,” Semeraro said, according to La Prensa. “The poor were at the center of her existence. She had a special love for the poorest children, whom she considered the Lord's favorites."