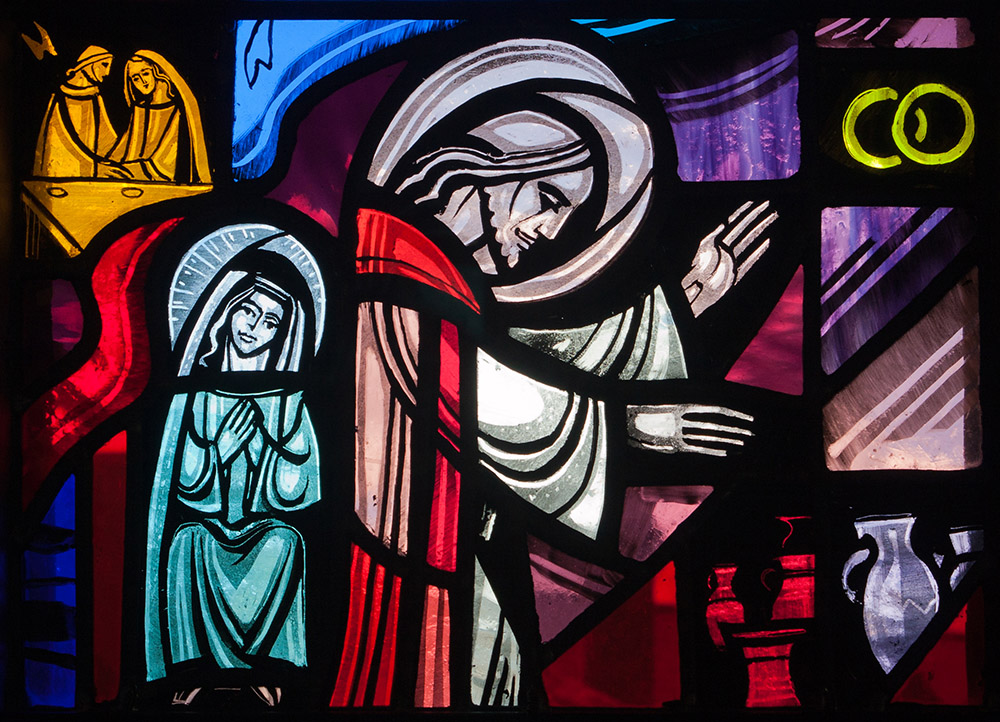 The wedding feast at Cana, created by George Walsh and depicted in stained glass at the Church of the Most Holy Rosary, Tullow, County Carlow, Ireland (Wikimedia Commons/Andreas F. Borchert)

God spoke through the prophet Isaiah to assure the Israelites of his faithful love for them, using the analogy of a mother, because a mother's love for her child is quite unconditional. For example, Isaiah 49:15-16 and 66:13 — probably the best example of a true love that humans are aware of.

A child starts bonding with the mother for its first nine months in the womb, followed by the infancy stage, all through the adolescence until they are 18 years old. In many countries, that is when one is legally able to live independently from the mother. For all this period, the child learns steadily from her first teacher — the mother, then the father, her siblings and the community. At 18 years, the child leaves the mother.

It is of paramount importance for both government and society to ensure that mothers are of sound mind, character and literacy, for it is upon them that the society depends in raising the future generations, at the very crucial time when the child is grasping and learning so much.

During the child's school life, many mothers participate actively in the children's academic and other school meetings. This leads to both mothers and the children growing together; the mother learns more about the child than the father — who may rarely attend these meetings, if at all.

As the youth becomes an adult, many may find the mother more approachable — for example, to reveal the fiancée — and the mother then talks to the father, the authority in the family.

My own home community is a patriarchal one but surprisingly, many grown men opt to adopt their mother's name as a family name such as "John Mwangi Wanjru" or "Wa Mugure."

From what I have been able to gather from my close friends, what prompts these men to change what is culturally embraced is the active involvement of mothers in their lives. They cite her standing with the children, especially in difficulties, as one major reason. They say even when the dad dies while the children are still young, the mother will sacrifice her own life and relationships in order to care effectively for their children.

This is a love like no other. Only the Son of God was able to leave his glory in heaven for the sake of our redemption. He did that for us; similarly, mothers "die" for their children to some extent.

When Jesus was completing his mission here on earth, he saw his mother and the disciple whom he loved, and said to his mother: "Woman, behold your son." Then he said to his disciple, "Behold your mother" (John 19:26-27). In my personal interpretation, I imagine that our Lord understood very well the role played by a mother, so he ensured that the disciple he loved took care of his own mother, and that she took care of the disciple that he loved.

In all my studies about Mother Mary, my favorite story is the one where Jesus changes water into wine. It has always baffled me that although it was not yet time for Jesus to carry out his ministry, yet through the intercession of his own mother he acted against the eternal plans. Wao! Quite amazing — indeed thrilling!

I first came across this verse in 1982 as a second-year high school student. It was part of the Christian religious education class. Since then, I have had the habit of going to the Son through the Mother, especially at any dire point of need.

For example, in 1986 as I was preparing to join religious life, I shared this desire with my mother — and to say the least — she was not amused. Rather, she exclaimed, "Do you mean you will not give birth and name them after me?" 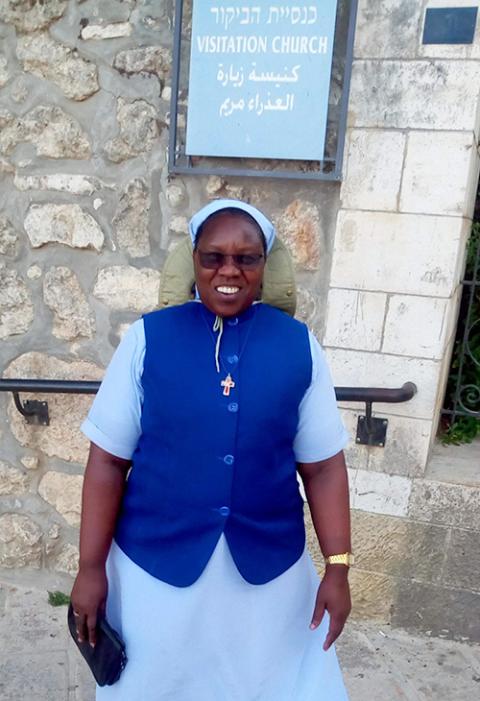 Sr. Nancy Watenga on her pilgrimage to the Holy Land, at the Church of the Visitation (Courtesy of Nancy Watenga)

I still can't explain my answer, but I told her that I would give birth to so many children that she would have no time for rest as she cares for them — meaning my spiritual children as a Catholic sister.

I never talked about the subject again but I resorted to prayer: Three Hail Marys in front of a statue of Our Lady of Fatima in our parish every day after morning Mass.

After a month, my mother called me and declared; "I surrender, even if the whole six of you want to be sisters, now go with my blessings!" The rest is history. God makes a way where there is no way.

In my bucket list, one of the items had always been a visit to Israel to see for myself where the "gentleman" that "captured" me came from! Recently in 2019, it came to pass, but not without a lesson!

Everything was set and ready, but on the actual traveling day I confused the time. While my colleagues were being screened at the airport, I was still at home thinking the hour was yet to come. The shocking phone call came from the organizing priest, and I could only sit on the bed to contemplate the next right move.

There were three things that were urgent: first the driver to take me to the airport about 25 kilometers away, then the documents and my travel money. I was to pick up the driver about a kilometer away. So when I got in the car — I have a statue of Our Lady of Immaculate Conception on the dashboard — I remember praying and asked her to turn my water into wine.

In a nutshell, I arrived at the airport just after the plane landed. He delayed the plane through the intercession of his Mother. I think I observed a first-class miracle. The journey continued and we had a fruitful, memorable trip!

The third encounter was last year. To give myself a cushion in the aftermath of COVID-19, I looked for a job running a primary school — which may not be as demanding as a secondary school or college — to allow me to re-strategize my work on my bucket list. The lady that owned the school died of COVID-19 in November 2020. As usual, people talked of all sorts of things. For instance, I heard people said that the school collapsed with the death of the lady, who was the real visionary! This traumatized both the chairman and the director, the father and the son respectively.

I prayed through Mother Mary that she may restore the glory of the institution. She did! The school got the highest mean score ever in its history, with all the 31 learners going to national schools in the country. Everybody glorified God and to date many are still witnessing that it was actually God's doing.

In conclusion, a mother will always be a mother!