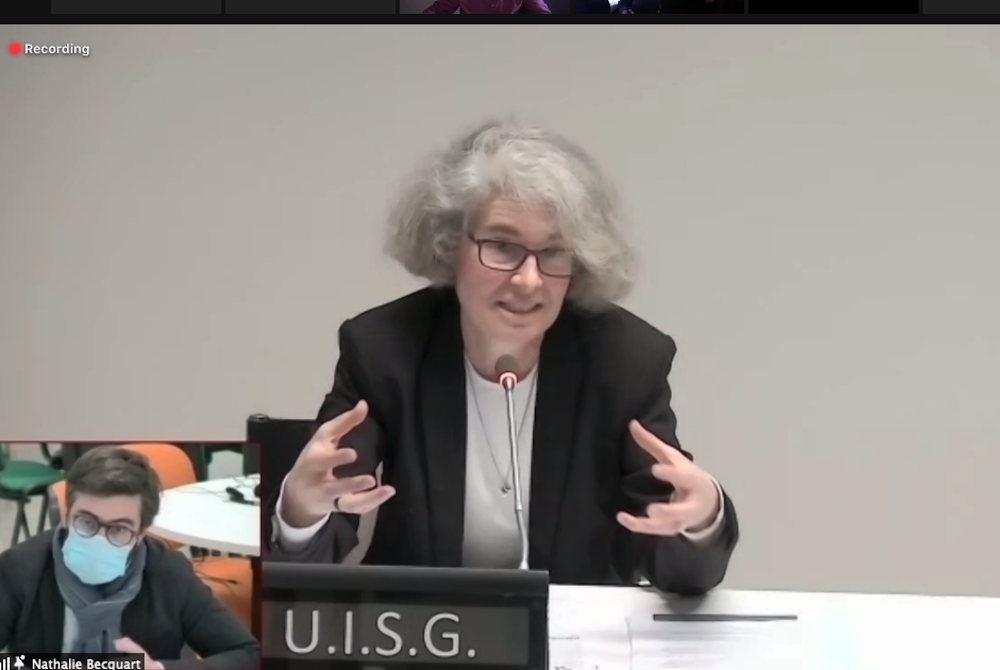 Xavierian Sr. Nathalie Becquart was named by Pope Francis as one of two synod undersecretaries on Feb. 6. She spoke to members of the media in a videoconference Feb. 10. (GSR screenshot)

The first woman selected to serve as an undersecretary for the Vatican's office for the Synod of Bishops said Feb. 10 that she hopes her appointment will help "open up new possibilities" for women in the Catholic Church.

Xavierian Sr. Nathalie Becquart, named by Pope Francis as one of two synod undersecretaries on Feb. 6, expressed a desire that the church "include women more and more in the reflection, discernment and decision-making processes."

"Co-responsibility is the way we are going to work ahead," said Becquart, speaking at a briefing organized by the International Union of Superiors General, the Rome-based umbrella network of women's religious orders across the world.

The office of the Synod of Bishops is primarily tasked with helping organize synod meetings, which bring hundreds of Catholic bishops to Rome every few years to discuss topics chosen by the pope.

The synod office is led by Cardinal Mario Grech. Francis appointed Becquart and Augustinian Fr. Luis Marín de San Martín to share duties as the department's second-in-command leaders. At the same time, the pope also made San Martín a bishop.

Some have hailed Becquart's appointment to the office as a signal that Francis may choose to make her the first woman to serve as a full voting member at the next Synod of Bishops, scheduled for October 2022.

Although women have been appointed to synods in non-voting capacities as auditors or experts, none has yet served as a full voting member.

Becquart, who was speaking at the briefing in French through an English translator, did not specifically say if she expected to be named a full member of the 2022 synod. She said synod meetings take place in an atmosphere of "common discernment" and referenced how most synods successfully approve their final documents by wide voting margins.

"The goal of a synod is to build a consensus in order to reach a common decision," said Becquart.

Asked about the question of whether the church might one day return to ordaining women as deacons, Becquart referenced the two commissions that Francis has created to study that subject.

"I would say it's part of an ongoing reflection," said the new undersecretary. "The main question that has also been underlined by Pope Francis is how can we bring women to participate in the decision-making process and to be empowered?"

Becquart also referred to the pope's recent decisions to make explicit that laywomen can act as readers and altar servers in liturgical celebrations.

"Now [women] have a ministry which is official, is permanent, is actually something new," she said.

Mentioning that she focused on the Dominican theologian Fr. Yves Congar during her theology studies, Becquart said she believes the Holy Spirit "works by innovating in continuity with the past."

Becquart is now one of several women serving in undersecretary roles at the Vatican. Others include Our Lady of Consolation Sr. Carmen Ros Nortes, at the Congregation for Religious, and Linda Ghisoni and Gabriella Gambino, at the Dicastery for Laity, Family and Life.

Also speaking briefly at the Feb. 10 event were Claretian Sr. Jolanta Kafka, the president of the International Union of Superiors General, and Loreto Sr. Pat Murray, its executive director.

Murray told Becquart that she will have the prayers and support of men and women religious across the world in her new role. Referencing the bonds that those in religious life share, Murray said: "Where one of us is, all of us are."