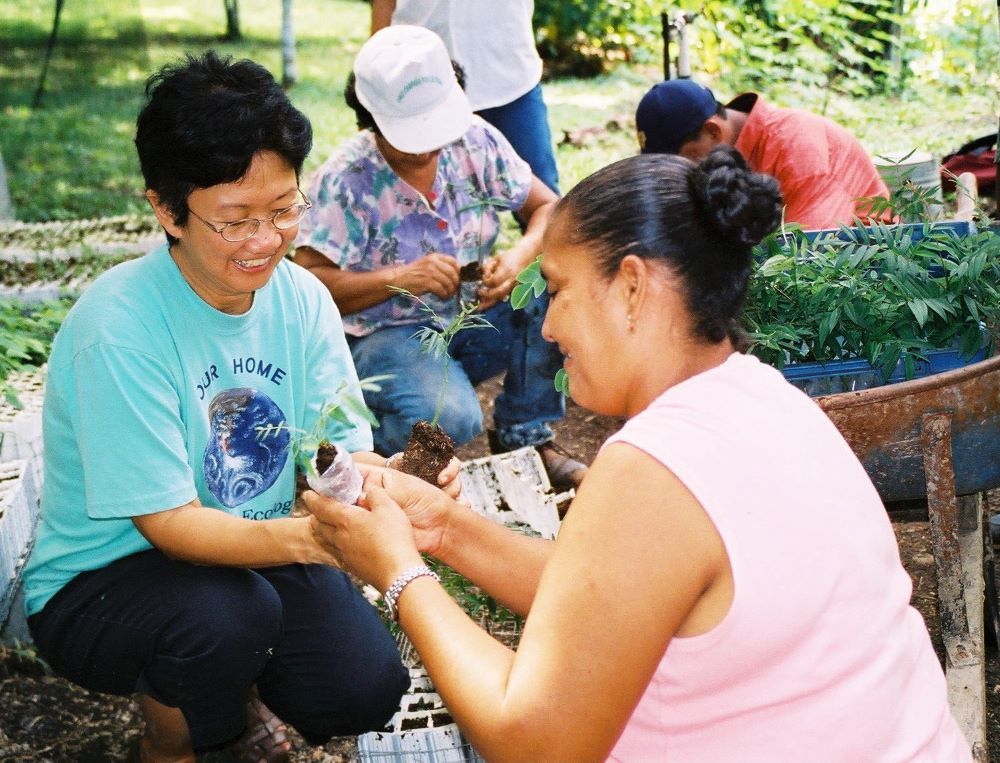 Maryknoll Sr. Joji Fenixm, left, is working to preserve native trees and plant life at a tree nursery at the Maryknoll Sisters Pastoral Care Center in Darien, Panama. The center gives workshops on integrated health and nutrition, organic agriculture, small project administration and the family. The center is one of the congregation's environmental ministries. (Courtesy of the Maryknoll Sisters)

The Maryknoll Sisters, a 110-year-old congregation based in Ossining, New York, with more than 300 members, has embarked on a new discernment initiative based on the recognition that climate change is altering the nature of mission work.

"Today, the Maryknoll Sisters take a new step in their history as climate change leads to worldwide migration, violence, racism, suicide, and poverty threatens peace and justice in so many parts of our world, the Sisters see the urgent need to ask how and where they are most needed today?" the congregation said in an Aug. 9 statement. 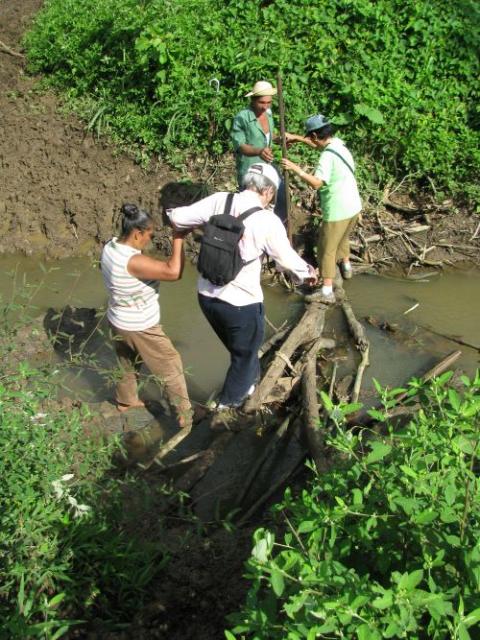 Maryknoll Sr. Melinda Roper, center, in Darien, Panama, working at the Maryknoll Sisters Pastoral Care Center. The center is located in the Panamanian rainforest and has a model farm, conserving some 96 acres of the surrounding rainforest and letting it grow back with native plants and animals. The center is one of the congregation's environmental ministries. (Courtesy of the Maryknoll Sisters)

The congregation's leadership team sent an invitation to congregation members asking who was interested in helping lead the discernment process, and seven sisters volunteered.

The statement said the seven sisters "envision and embrace a new mission presence, as part of the One Earth Community, meaning that we are all connected as a human family and with all of creation. This will enable the Sisters to respond to God's call that we need to care for one another, the Earth and all the peoples' who reap its bounty."

The new mission initiative, the congregational statement said, "is not only for those seven Sisters, but belongs to the Congregation as a whole. The seven sisters will now continue discernment as a group to determine their next steps."

"We are called to take risks and experiment, be creative; and so we invite the Congregation in this discernment with not only prayers and support, but also by discerning for yourself, what is new in your mission life today?" Sr. Teresa Hougnon, president of the congregation, said in the statement. "Every day we are called into newness in the evolving and expanding universe. Every creative process holds the paradox of what is and what is to come."

The scholarship will provide financial assistance to students enrolled in the advanced degree or continuing education programs in Xavier's Institute for Black Catholic Studies. 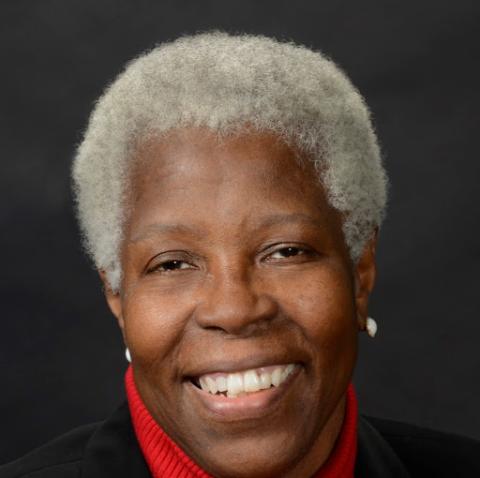 Phelps, formerly Sr. Martin Thomas, is a renowned theologian, educator, community leader and scholar who served as the director of the Xavier institute from July 2003 to August 2011.

While the endowment honors "Dr. Phelps' remarkable contributions to the IBCS, the Black Catholic community and the church at-large," Adrian Dominican Sr. Elise D. García, the congregation's newly elected prioress, said in an Aug. 8 statement the endowment is also a reparation for the congregation's "past participation in structural racism and in support of new pathways toward racial justice."

Kathleen Dorsey Bellow, current director of the institute, said "the sisters' investment responds boldly to the need for solidarity that engenders right relationships in the Body of Christ. The IBCS looks forward to this collaboration. IBCS participants are immersed in a unique learning environment rooted in critical theological studies that focus on Black approaches, critiques and contributions to systematic and pastoral theologies, ministry, aesthetics and education."

Phelps was instrumental in the institute's establishment at Xavier, the nation's only historically Black and Catholic university. Phelps served many years as a member of the institute faculty and was associate director for its degree program.

"My life objective is to assist in the inner transformation of the human community by participating in the education of Christians and other religious women and men committed to using their knowledge and expertise for the construction of a more inclusive world by sharing their knowledge and experience of God and in the case of Christians by continuing Jesus' proclamation of the good news of God's universal love and His call for social justice and communion," Phelps in a previous statement said, quoted by the university. 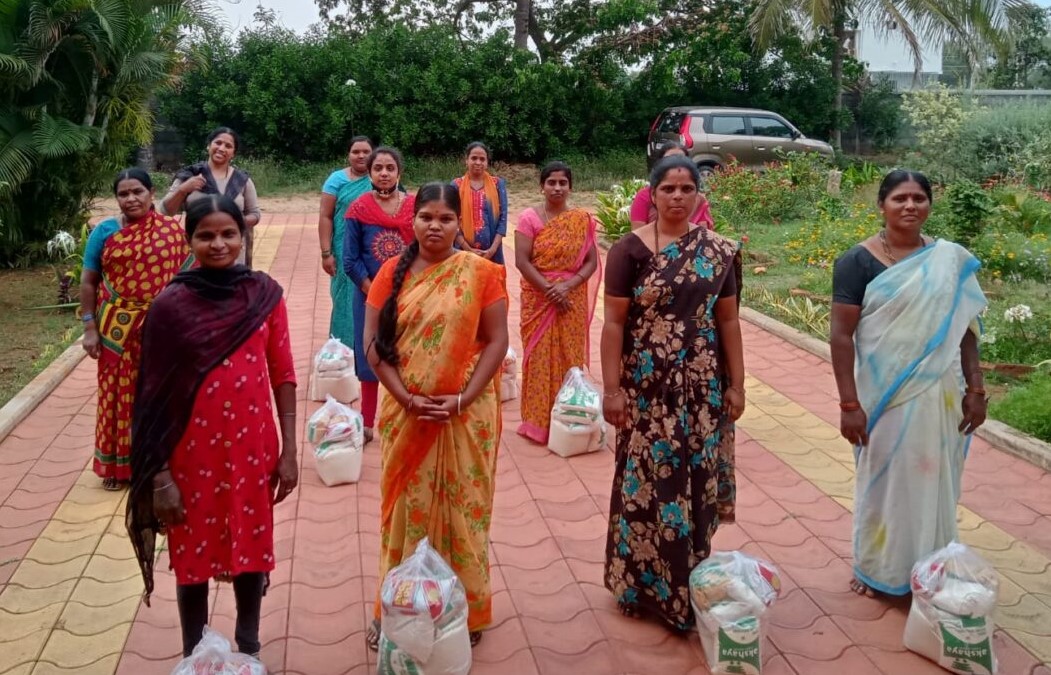 More than 4,000 people, including 800 families, received food kits in the villages around the Salesian-run Ferrando Center for Vocational Training in Srirampura, India. The women here are beneficiaries. (Courtesy of Salesian Missions USA)

Salesian Missions, the U.S.-based development arm of the Salesians of Don Bosco, is joining other organizations in recognizing World Humanitarian Day, the annual event honoring the work supporting those facing crises and the aid workers who face danger in helping others.

The United Nations established the annual Aug. 19 recognition to coincide with the anniversary of the Aug. 19, 2003, bombing of the U.N. headquarters in Baghdad that killed 22 people, including the chief humanitarian U.N. representative in Iraq, Sergio Vieira de Mello.

"Because Salesian missionaries, sisters and volunteers live within the communities they serve, they are perfectly positioned to respond in times of humanitarian crisis," Fr. Gus Baek, director of the agency, said in an Aug. 9 statement. "Salesian programs help to provide food, clothing and shelter to those in need, and our missionaries remain through the long recovery process to help families rebuild their homes and salvage their livelihoods."

Among the Salesians' work is support for a hospital in Ukraine in a partnership with the humanitarian group MedShare. The initiative delivered surplus medical supplies and equipment to ambulances and clinics treating those who have been internally displaced within the country, which the Russian military invaded Feb. 24. 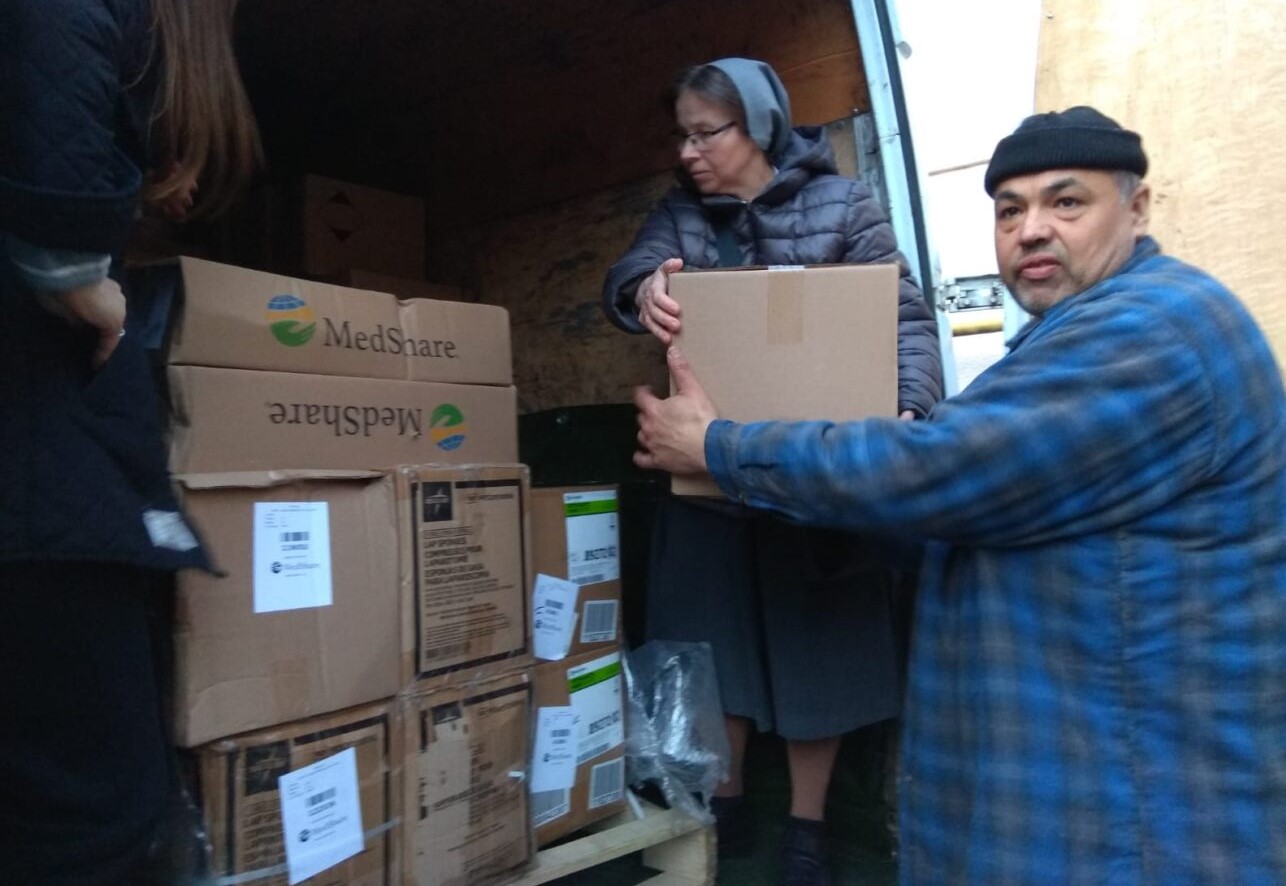 Other countries where the Salesians work include Brazil, Pakistan and India. In India, more than 4,000 people, including 800 families, have received food kits in villages around the Ferrando Center for Vocational Training in Sriramapura, a residential suburb of Mysore in southwestern India, the agency said, as part of efforts "to mitigate the challenges brought on by the COVID-19 pandemic."

It noted that the Missionary Sisters of Mary Help of Christians operate the center, which provides "education for poor and at-risk young women in the region. The area surrounding the school is made up of poor villages where people are daily laborers, migrants, widows and children."

Salesian Missions is headquartered in New Rochelle, New York, and is part of the Don Bosco Network, a worldwide federation of Salesian nongovernmental organizations. The organization's mission "is to raise funds for international programs that serve youth and families in poor communities around the globe."

The Salesian missionaries include sisters, priests, brothers and laypeople dedicated to caring for children who live in poverty in more than 130 countries.

Founded in 1946 in the wake of World War II, the refugee group works to protect the rights of people who are displaced by violence and find themselves vulnerable during crises.

The Oslo-based council will be honored at an Oct. 21 ceremony in Beverly Hills, California, and will receive $2.5 million in funding.