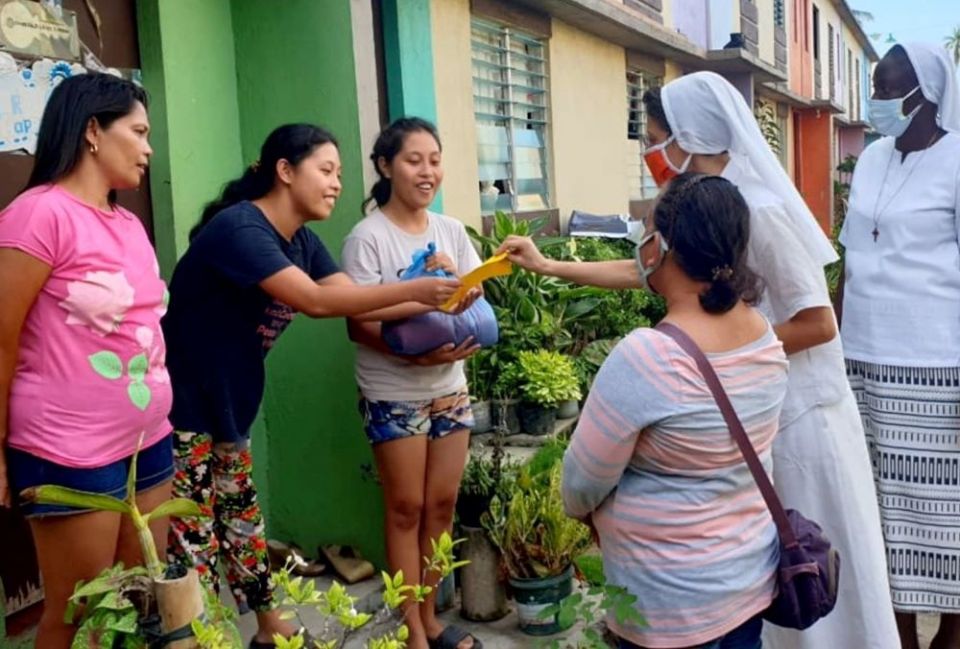 A still image from "New Leaders," a new video from the International Union of Superiors General's Sisters Advocating Globally, an advocacy project to inform the public on the ministries of Catholic sisters (Courtesy of UISG)
Editor's note: Global Sisters Report's Monday Starter is a weekly feature from GSR staff writers that rounds up news from or about women religious that you may otherwise have missed.

The International Union of Superiors General has released a new video featuring sisters who speak on the importance of including marginalized and vulnerable communities in dialogue regarding development.

The 87-second video, "New Leaders," is the second installment of Sisters Advocating Globally, an advocacy project that UISG launched in 2020 to inform the public on the ministries of Catholic sisters, particularly those related to development solutions for neglected communities.

With support from the Global Solidarity Fund, the project has "built capacity for sister-led networks and congregations to expand their focus on advocacy, shifting their approach in development from a primarily needs-based, responsive model to include a search for structural, systemic solutions that engage decision-makers at every level," according to a press release. The effort, it continued, is in response to Pope Francis' appeal for "real change, structural change."

The Sisters Advocating Globally project also highlighted the May speech given by Loreto Sr. Patricia Murray, UISG's executive secretary, at the World Economic Forum in Davos, Switzerland, and a call to action to development leaders from Talitha Kum to encourage "global governance stakeholders including states, international organizations, non-state actors such as civil society groups, private sector organizations and academic institutions, and all those who have a role to play in the tireless effort towards the eradication of human trafficking and exploitation."

On the need for hearing from those most affected by systemic issues, Daughter of Wisdom Sr. Jean Quinn, the executive director of UNANIMA International, said in the press release that "these complex, systemic, and interconnected global challenges have common roots, and they constrict communities' livelihoods, access to much-needed protections, and human dignity. Sisters on the frontlines, working with these marginalised communities, are often best equipped to inform solutions based on the lived experiences of the people they serve.

Eastern African bishops urged to include sisters in church affairs

The auxiliary bishop of Tanzania's Bukoba Diocese had a message for Catholic bishops in Eastern African countries: Women religious are important leaders in their dioceses and should not be sidelined. Otherwise, the church will miss out on the women's expertise and professionalism, he said, as ACI Africa reports.

Bishop Method Kilaini shared this message in his July 11 address to delegates of the 20th plenary assembly of the Association of Member Episcopal Conferences in Eastern Africa in Dar es Salaam, Tanzania.

"We have a big army of women who are very well informed — the religious sisters. They have been formed mentally, academically and professionally," said Kilaini, according to ACI Africa. "If we do not use them, if we do not incorporate them into the affairs of the church, they will walk far away from it. They will probably establish a parallel organization to the church, or they will be used by other people, and that will be such a great loss to the church."

"We therefore have to use them, and we don't expect them to only say, 'Yes, Bishop. Yes, Bishop,' no. We have to make sure that we include them in our programs," he continued. 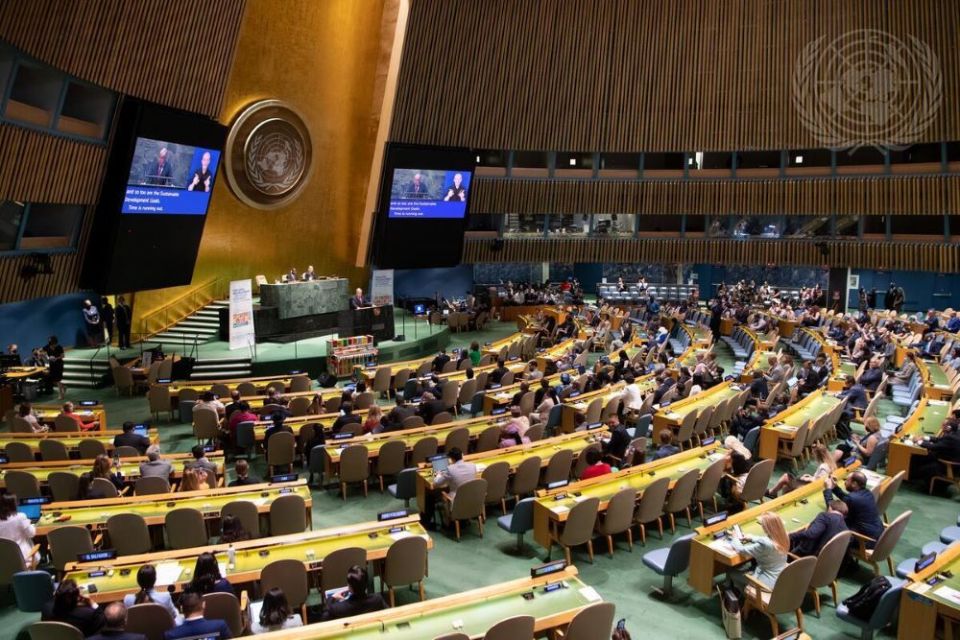 United Nations Secretary-General António Guterres (on screens and at podium) addresses the opening of the July 5-15 High-Level Political Forum on Sustainable Development convened under the auspices of the Economic and Social Council at the U.N. in New York. (UN photo)

United Nations officials say they are optimistic that despite grave challenges posed by the global pandemic, the U.N.'s sustainable development goals remain a potential target for the year 2030.

Speaking July 13 during the final days of the July 5-15 meetings of the world body's High-Level Political Forum on Sustainable Development, Collen V. Kelapile, president of the U.N. Economic and Social Council, acknowledged that following two years "of a surreal struggle against the pandemic, it is true that we now live in a world of increased conflict, inequality, poverty, and suffering; of economic instability; energy and imminent food crisis; increasing debt levels; of a slowing of progress towards gender equality and the empowerment of women."

Yet the senior Botswanan diplomat said "despite our grim times," there is "a continued air of optimism that the 2030 Agenda for Sustainable Development provides us a framework for building back better." The 17 goals are a framework for improving social and economic conditions throughout the world. 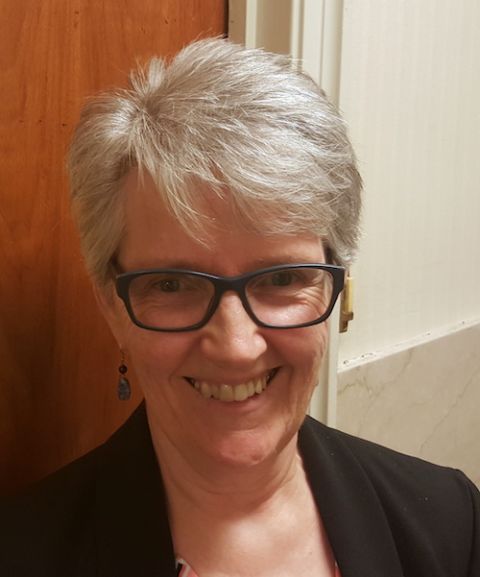 Sr. Winifred Doherty, the main U.N. representative of the Congregation of Our Lady of Charity of the Good Shepherd, said the meetings were a needed time to take stock of the global situation.

Doherty said she felt the meetings were a moment to re-energize and recapture some of the optimism that went into the formulation of the development goals in 2015.

"The whole spirit of that time came back to me, and we need to get back to that spirit," Doherty said in an interview with Global Sisters Report.

Doherty, an Irish sister who worked 16 years in Ethiopia, noted that the pandemic has taken a serious toll on access to education, particularly for girls, and has put millions of girls at risk of becoming child brides.

World economic worries are also causing some governments to ponder imposing austerity measures, which Doherty said is worrisome because they would unfairly affect those experiencing economic poverty.

"We must invest in a new way of being," she said.

A planned United Nations summit in 2023 will help both governments and advocates access the status of the 2030 goals, she said. The summit will mark the midpoint in the implementation of the 2030 agenda and the sustainable development goals, Doherty said. 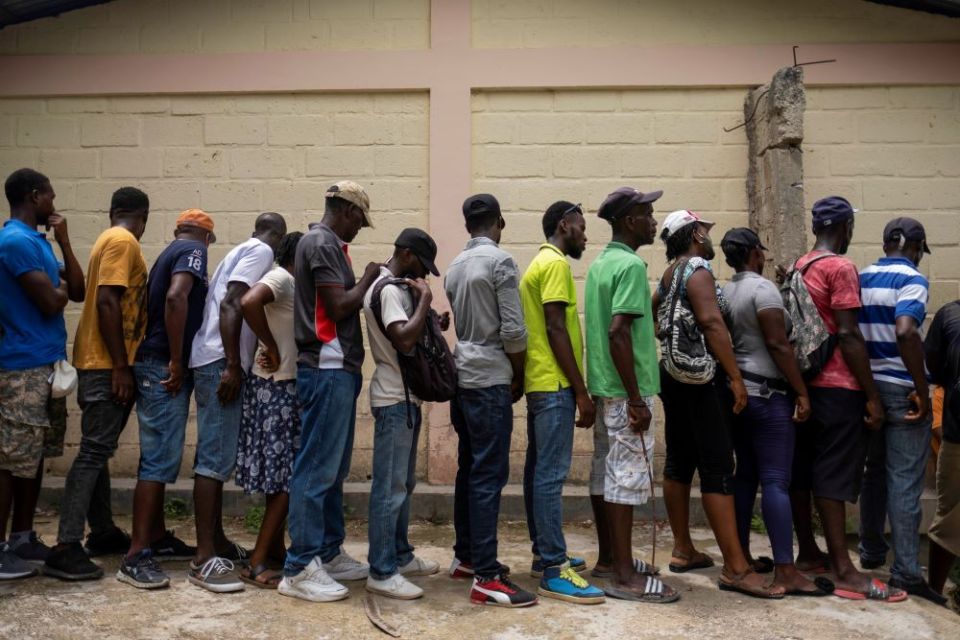 People affected by an earthquake wait for food provided by the World Food Program on Aug. 24, 2021, at a school in Port Salut, Haiti. (CNS/Reuters/Ricardo Arduengo)

The United Nations reports that the humanitarian situation in Haiti is steadily worsening due to gang violence in the country's urban areas.

This comes as the world body released its annual report on children and armed conflict, noting the continued threat children face in numerous countries riven by conflict and violence.

The U.N.'s World Food Program said July 12 that continued gang violence in Haiti is significantly threatening food security — the access to and availability of food — because distribution in the capital of Port-au-Prince and other areas is at a standstill.

The country is also being affected by the global fuel crisis caused by the ongoing war in Ukraine, officials said.

"The situation is spiralling out of control already," said Jean-Martin Bauer, the program's Haiti country director, as reported by UN News. "Large parts of Port-au-Prince are controlled by gangs; the data we have, show that the situation over the past 90 days has gotten worse... based on what is a very vulnerable place, we already had one million people in this city who were acutely food insecure."

Earlier this year, sisters working in Haiti reported the significant challenges their ministries face in the wake of the ongoing violence.

"I think one day we will get out of it," Sr. Denise Desil, the mother general of Haiti's Little Sisters of St. Thérèse of the Child Jesus, a Haiti-based congregation, told GSR. "But for now, it is very, very difficult, this current situation."

On the issue of children affected by violence worldwide, the United Nations report noted that there were nearly 24,000 verified "grave violations" — such as the killing and maiming of children — in 2021, UN News reported. That comes to about 65 violations daily, the report said.

"There is no word strong enough to describe the horrific conditions that children in armed conflict have endured," said Virginia Gamba, the U.N.'s special representative for children and armed conflict, according to UN News.

Among the countries with the most incidents, according to the report: Afghanistan; the Democratic Republic of Congo; Israel and the Palestinian territories; Somalia; Syria; and Yemen.