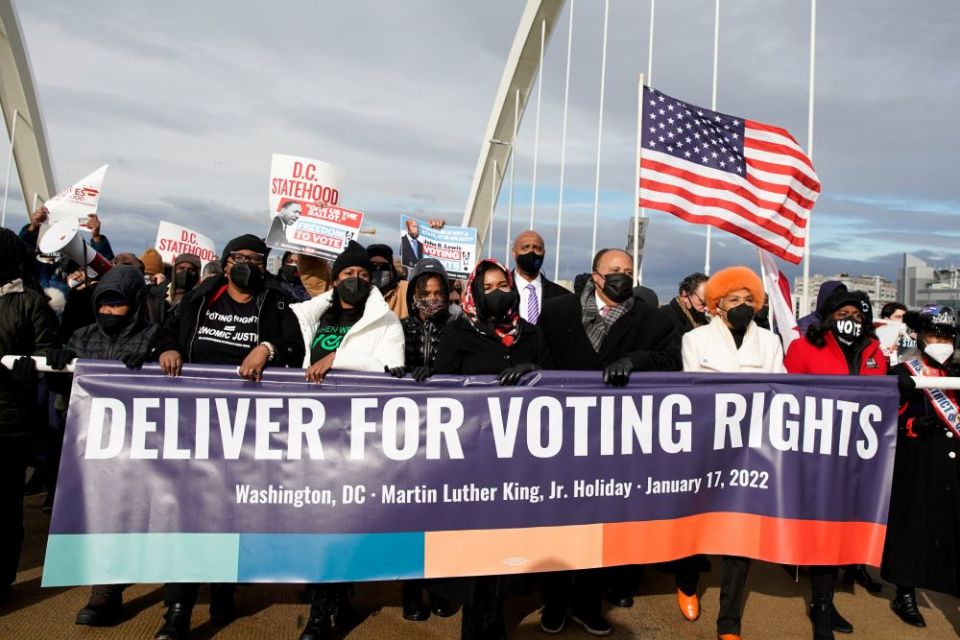 Martin Luther King III, the eldest son of late civil rights activist the Rev. Martin Luther King Jr., and his family take part in a Peace Walk on the Frederick Douglass Memorial Bridge in Washington Jan. 17 to urge Democrats to pass a law protecting voting rights. On Jan. 19, an attempt by Democrats to change filibuster rules in order to pass a voting bill failed amid opposition from Democratic Sens. Joe Manchin and Kyrsten Sinema. (CNS/Reuters/Elizabeth Frantz)
Editor's note: Global Sisters Report's Monday Starter is a weekly feature from GSR staff writers that rounds up news from or about women religious that you may otherwise have missed.

An Illinois-based congregation is calling for more citizen engagement and vigilance after the U.S. Senate failed last week to approve legislation to protect voting rights.

A number of states have "passed legislation that, in practice, reduces citizen access to the polls. This week our federal legislature has failed in an attempt to protect voter access and the constitutional rights of every U.S. citizen," the Dominican Sisters of Springfield said in a Jan. 20 statement, the day after the Senate failed to approve two voting rights bills.

"Our partnership with men and women of color has taught us that those on the margins are the first to lose this access when our democracy fails," the Dominican sisters said in their statement.

"As members of a religious order founded on the principles of democracy 800 years ago, we Dominican Sisters of Springfield have particular concern for what is transpiring in our nation. We believe once the rights of any citizen are endangered the rights of all citizens are endangered."

In the face of that, the congregation said, "We appeal to all citizens of this nation to engage in conversation with their state and federal legislators. It is essential that every citizen be vigilant about what is happening at the state level and proactive in demanding the protection of this sacred human right wherever it is endangered.

"By cultivating a sense of solidarity and a concern for the common good, it may yet be possible to preserve our democracy and allow it to be realized to its fullest extent."

Before the heated Senate debate about the legislation, the Leadership Council of the Adrian Dominican Sisters aligned itself behind the bills, the Freedom to Vote Act and the John Lewis Voting Rights Advancement Act.

In a statement issued Jan. 17, the national day of commemoration honoring the Rev. Martin Luther King, the congregation said it supports legislation "ensuring that all citizens of voting age are free to exercise their constitutional right to vote."

"The right to vote is fundamental to our democracy. It should not be dependent on political party, race, ethnicity, gender, sexual orientation, religious belief, or economic status," the statement said.

"As a nation blessed by people of all ethnic and racial backgrounds, including descendants of people who were sinfully enslaved for 12 generations, we are a multiracial democracy. As Dr. King once said, 'We may have all come on different ships, but we're in the same boat now.' "

A similar joint statement was issued the day before the national holiday by the Leadership Conference of Women Religious (LCWR), and the National Black Sisters' Conference. That Jan. 16 statement said  that the "sacred right to vote" is threatened "by those who seek to make voting more difficult and elected officials less accountable." The statement said that the legislation would "ensure that voters can safely and freely cast their ballots, protect against election sabotage, stop partisan gerrymandering, and limit the influence of dark money in politics."

The Senate defeat went along party lines, with Republicans unanimously opposing the legislation. In its statement, the Adrian Dominicans noted that "the vast majority of Congress has continued to reauthorize in bipartisan support until recently."

The National Advocacy Center of the Sisters of the Good Shepherd is calling on the U.S. Senate to pass the Violence Against Women Reauthorization Act of 2022, legislation its supporters say would strengthen rape prevention and anti-violence education efforts.

"The Senate needs a win; America needs a win; women need a win," Fran Eskin-Royer, the executive director of the Maryland-based advocacy arm of the Sisters of the Good Shepherd, said in a January 18 statement.

Saying that that the original legislation was groundbreaking 28 years ago, Eskin-Royer argued the legislative renewal of the act is needed as the pandemic continues.

"We have witnessed during our long two years and counting of the COVID pandemic that domestic violence has increased and opportunities to escape have narrowed," she said, noting that the legislation would expand access to emergency housing support for survivors.

The legislation, Eskin-Royer said in the statement, also would ensure that "predators who prey on American Indian women and children can be held accountable and would prohibit future individuals from possessing or purchasing firearms if they have a protective order against them and are convicted of a domestic violence crime."

In her statement, Eskin-Royer also urged senators to join their colleagues who are already co-sponsoring the reauthorization legislation. The original act has been reauthorized three times. 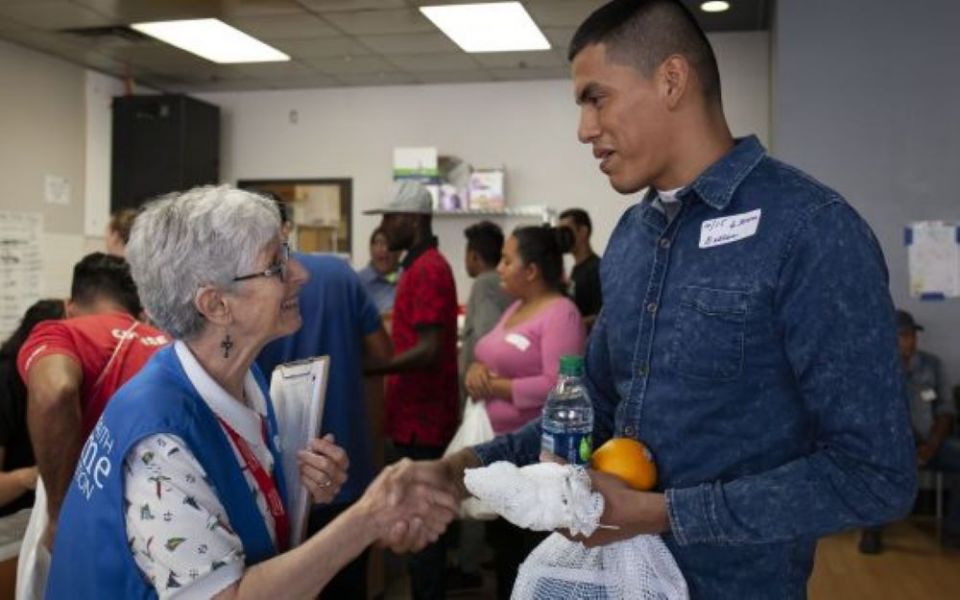 Presentation of the Blessed Virgin Mary Sr. Sharon Altendorf, left, says goodbye to Jader Reyes of Nicaragua, after she gave him food and mapped his travel itinerary on June 14, 2019. Altendorf was part of a coordinated effort by the Interfaith Welcome Coalition to help immigrants released from Border Patrol facilities or detention centers find their way to their final destination. (Nuri Vallbona)

An Indiana-based congregation, the Sisters of Providence of St. Mary-of-the-Woods, is seeking sister volunteers to work one month or longer along the U.S.-Mexico border.

The program, "Catholic Sisters Walking with Migrants," is a volunteer and advocacy training experience funded by the Conrad H. Hilton Foundation. (The foundation is a major funder of Global Sisters Report.)

The Kino Border Initiative, a humanitarian and advocacy group based in Arizona and Sonora, Mexico, is offering the training. All expenses, including travel and housing, are included.

To be considered, applicants must be members of a women’s religious order; must be available for one month or longer of in-person service; and must have intermediate or advanced Spanish-language skills.

According to its website, the Kino Border Initiative "was inaugurated in January of 2009 by six organizations from the United States and Mexico: The California Province of the Society of Jesus; Jesuit Refugee Service/USA; the Missionary Sisters of the Eucharist; the Mexican Province of the Society of Jesus; the Diocese of Tucson; and the Diocese of Nogales." For information, email volunteer@kinoborderinitiative.org.