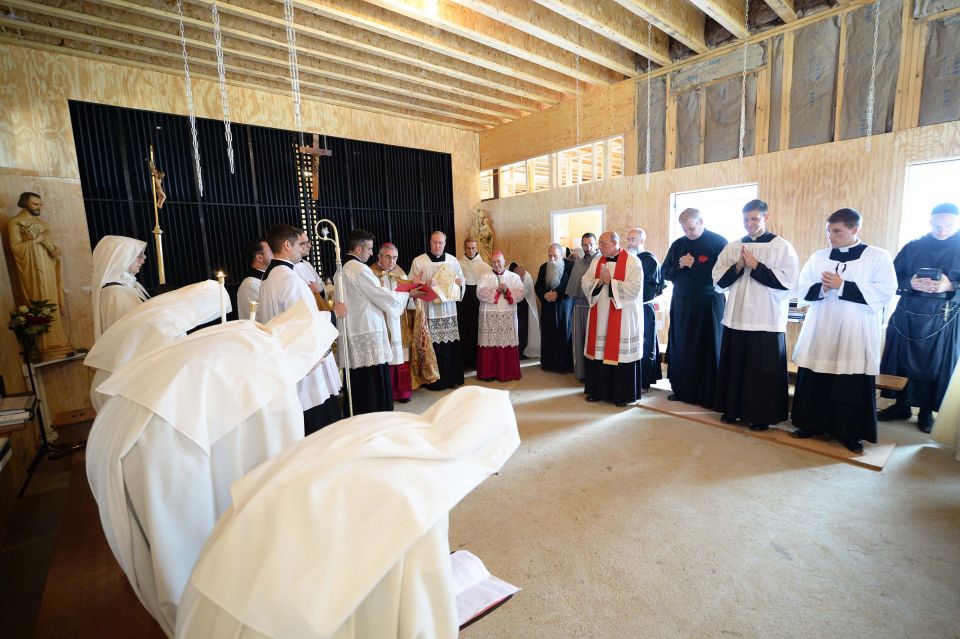 Clergy and Discalced Carmelite nuns gather in the temporary chapel at the Carmelite community July 25, 2018, in Fairfield, Pennsylvania, as Bishop Ronald Gainer of Harrisburg prepares to bless it. The Carmelite monastery in Philadelphia, which has existed since 1902, appears to be closing. (CNS/Chris Heisey, The Catholic Witness)

The Carmelite monastery in Philadelphia, which has existed since 1902, appears to be closing.

A Catholic blog posted April 12 that on April 9, all but one of the nuns had left the Carmelite Monastery of St. Joseph and St. Anne and had been driven to a monastery in Valparaiso, Nebraska.

Another blog posted April 29 that the cloistered order's website had been updated to say: "It has been with shock and sadness that the Carmelite nuns left Philadelphia and returned to Valparaiso Nebraska, leaving Mother Pia alone," said Phatmass.com. "The future of the monastery is in jeopardy and there is a real chance that there will not be a Carmel of nuns in the Archdiocese of Philadelphia."

Kenneth A. Gavin, chief communications officer for the Archdiocese of Philadelphia, confirmed that all but one of the nuns were gone.

"The Carmelite nuns who had recently been living at the Carmelite Monastery of Philadelphia, made the decision to transfer to the Carmelite Monastery of Valparaiso, Nebraska. That action was taken of their own volition," Gavin said in a written statement. "It is with great sadness that we learned of this decision as it resulted in leaving a sole surviving member at the Philadelphia Carmel. The first priority at this time is to provide for her residency, future welfare, and life as a consecrated religious."

The Discalced Carmelites are a contemplative order that rarely, if ever, leave the monastery; visitors are met from behind a screen.

In 2015, the monastery was down to six nuns, and by 2017 there were only three active members. But that summer, 10 new nuns arrived: Six from the Carmel of Jesus, Mary and Joseph in Valparaiso, Nebraska, and four from a monastery in Elysburg, Pennsylvania. The Elysburg monastery was established in 2009 by nuns from Valparaiso, which has been growing rapidly since its founding in 2001. The Priestly Fraternity of St. Peter, which helped build the Valparaiso monastery, said in 2009 that the Nebraska order had 33 nuns, while Carmelite monasteries are usually limited to 21.

The prioress of the Philadelphia monastery in 2018, when the 10 new nuns arrived, who kept the tradition of not giving her name, told CatholicPhilly.com that the new nuns "are all in their 20s and 30s and they are all devout, intelligent and talented, and many were home-schooled. They want an authentic Carmelite vocation."

The Philadelphia congregation now says there is a solemn High Mass in Latin on June 11 "for the protection and flourishing of the Carmel," which will be livestreamed on the order's Facebook page.

The website also asks supporters to pray various novenas to prevent the monastery's closure, and to write to both the Archbishop of Philadelphia and the prefect for the Congregation for Institutes of Consecrated Life and Societies of Apostolic Life. 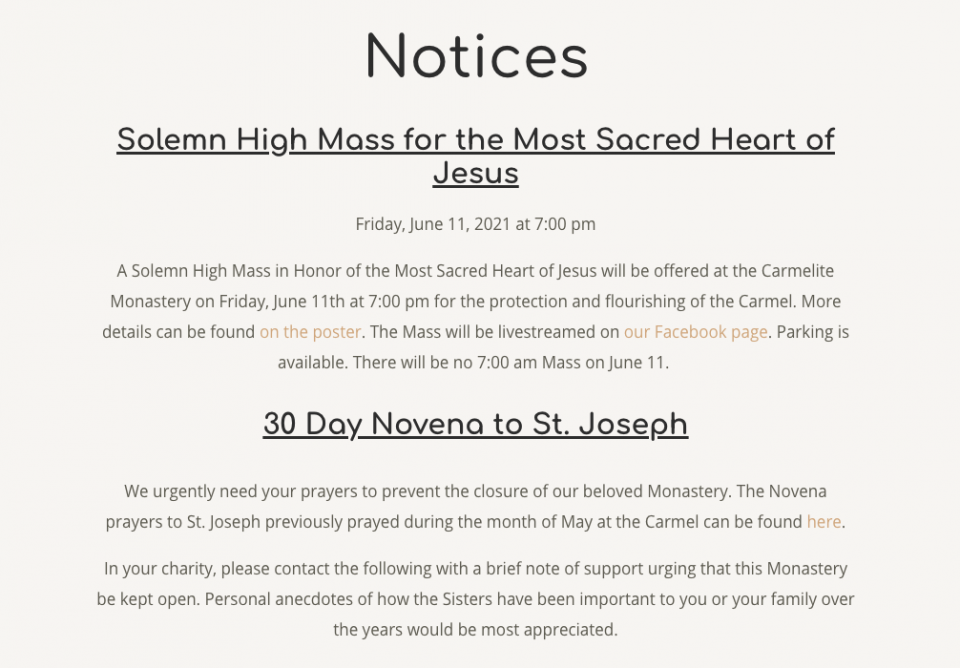 The Philadelphia Carmelites website asks for novenas to prevent the monastery's closure, and for supporters to write to the Philadelphia archbishop and the prefect for the Congregation for Institutes of Consecrated Life and Societies of Apostolic Life. (Screenshot/Philadelphiacarmelites.org)

Attempts to reach the Philadelphia monastery for comment were unsuccessful, as the voicemail box for its phone number is full. Phone calls to the chaplain for the order were unanswered. The superior at the Valparaiso monastery, citing the order's shunning of publicity, declined to comment.

A parent of one of the nuns said the area around the Philadelphia monastery, which has been in its present location since 1910, is heavily urbanized, so instead of the quiet, pastoral setting conducive to contemplative prayer, it is loud and filled with traffic and feels unsafe. The news that his daughter had moved back to Nebraska came as a relief, he said. He asked that his name not be used to avoid controversy.

An order that is active in providing social services would be a much better fit for the neighborhood, he said, because "As much as I believe sisters belong in the inner city, I don't believe the Carmelite sisters are the ones to do that."

Across the street from the monastery is a Pizza Hut and a CVS pharmacy, another street bordering its walls has semi-trucks and trailers parked next to a trash-strewn empty lot. The Nebraska monastery, by contrast, is nestled in rolling farmland.

Gavin's statement said the situations is "most regrettable," but "the current circumstances will almost certainly result in the necessity of closing the Philadelphia Carmel.

"The presence of this Carmel in the history and life of Philadelphia Catholics has been significant, and every effort is being made to resolve this situation with the greatest justice and charity for all."

News | Carmelite monastery in Philadelphia, founded in 1902, appears to be closing

Holy Week reimagined: Get up and dust yourself off

Q & A with Sr. Sophie de Jésus, founder of programs to help teens in need