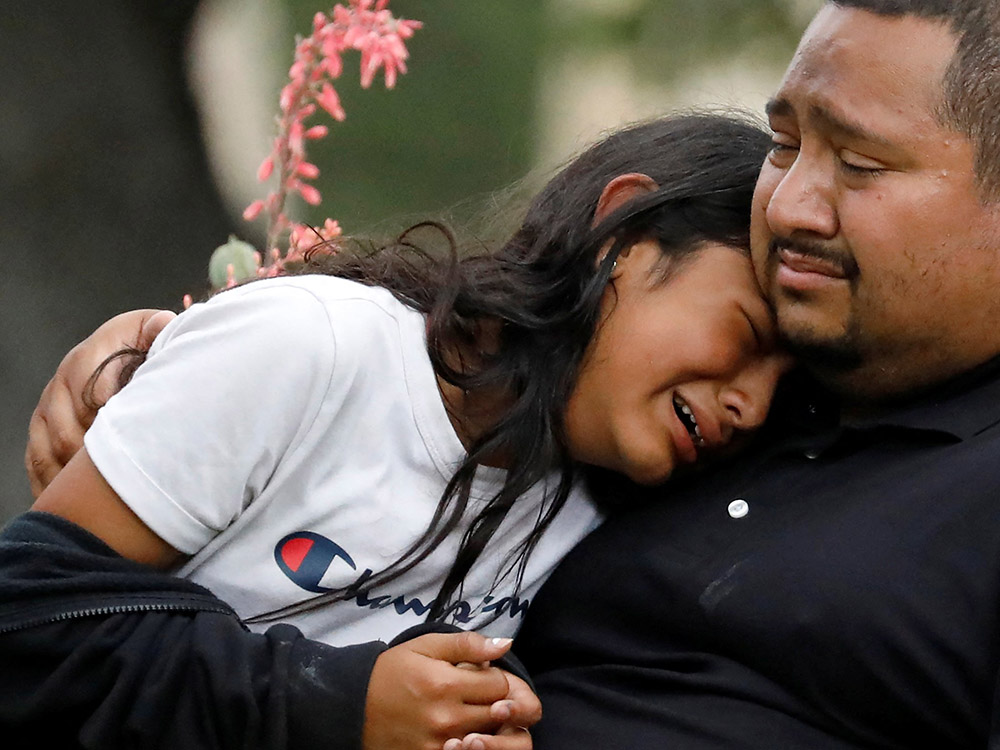 People react outside the SSGT Willie de Leon Civic Center, where students had been transported from Robb Elementary School after a shooting, in Uvalde, Texas, May 24. (CNS/Reuters/Marco Bello)

Editor's note: This piece was updated at 3 p.m. Eastern time May 27 with new information throughout.

Gun safety is a public health issue that must be pursued at federal and state levels as well as through corporate shareholder advocacy as a way out of the gun violence gripping the country, Catholic women religious leaders say.

On May 24, an 18-year-old entered Robb Elementary School in Uvalde, Texas, and killed 19 children and two teachers, the worst U.S. school shooting in 10 years. Officials identified the man as Salvador Ramos and said he died at the scene.

In the wake of the shooting, leaders of congregations, shareholder advocacy groups and Catholic organizations are calling for action to enact "common-sense" restrictions that the majority of Americans support but Republican lawmakers and powerful gun-lobby advocates oppose.

Sr. Judy Byron, an Adrian Dominican sister and director of the Northwest Coalition for Responsible Investment, said advocates for stricter gun laws should avoid the term "gun control" because it raises the ire of the National Rifle Association and gun-rights advocates.

"That's what the gun companies use against us, that we want to get rid of the Second Amendment," Byron said. "We want to talk about 'gun safety' and 'anti-violence.' "

Byron is among a cadre of Catholic sisters at the forefront of efforts by faith-based investors to hold gunmakers accountable for improving gun safety.

"We need the gun manufacturers to step up," she said in an interview with Global Sisters Report. On a legislative, public policy level, "we as a country need to step up to enact universal background checks and make decisions on the type of weapons that can be sold."

The latest action on the corporate front will take place June 1, when Sturm, Ruger & Company, Inc., stockholders will consider a shareholder resolution that would require the gunmaker to oversee "a third party Human Right Impact Assessment... which assesses and produces recommendations for improving the human rights impacts of its policies, practices and products, above and beyond legal and regulatory matters."

The resolution would require that "input from stakeholders, including human rights organizations, employees, and customers, should be considered in determining the specific matters to be assessed."

The resolution makes a business case for such an assessment, noting that human rights risks affect shareholder value and "depending on whether and how they are managed, can be a bellwether for a company's long-term viability. A company's efforts to demonstrate that its policies and practices reflect internationally accepted human rights standards can lead to successful and sustainable business planning, and improved relations with customers, workers, communities, investors and business partners."

The company's board of directors recommends that shareholders vote against the resolution, contending that the company "has led the industry on gun safety initiatives and has demonstrated a deep respect for human rights, which renders the proposal unnecessary. Moreover, the outcome that proponents advocate and actually seek will harm the company, destroy shareholder value, and undermine the Second Amendment rights of the company's customers."

The company notes that it paid the NRA $500,000 in 2021 for promotion and advertising activities and that one of its directors, Sandra Froman, has served as an NRA board member since 1992 but does not receive any portion of the payments the company made to the NRA.

The general public and federal and state legislators could regulate how the weapons are marketed, Byron said.

"It's about holding these companies accountable," she said. "They would have to release information on how they market and who they market to, who is buying the weapons and what they are doing with them."

Other safety features could be required or included with guns, such as technology that would only allow the owner to use them, which would cut down on accidental shootings and suicides, she said.

"Whether you're a shareholder, gun owner or voter, if you want to do something about this, you have the power of your vote," Byron said. "People have to realize what their power is."

Although federal law restricts purchase of handguns to people 21 years or older, the minimum age in Texas to buy any other type of firearm, including an assault weapon, is 18, according to The Texas Tribune. The gunman in the Uvalde shooting purchased two assault weapons days after his 18th birthday, the Tribune reported.

In only six states, the minimum age to buy long guns is 21, the Tribune reported: Florida, Washington, Vermont, California, Illinois and Hawaii. The majority did so following the February 2018 shooting at a Parkland, Florida, high school where a 19-year-old killed 17 people and wounded 14.

Byron likened the advocacy for stricter gun-safety laws to other public policy fights. In the 1960s, cars were unsafe, she said, until there was pressure to add seat belts, airbags and other lifesaving technology.

As for the argument from opponents to tighter gun laws that safety measures wouldn't stop a person with mental illness from carrying out a mass shooting, Byron said: "We'll always have mental illness but we don't have to give a person a gun."

"Thoughts and prayers alone are no longer acceptable for people of faith and goodwill. We must act to bring an end to such senseless violence," said Mercy Sr. Mary Haddad, president and CEO at the Catholic Health Association of the United States.

The organization, along with others, has urged Congress to provide $35 million for the U.S. Centers for Disease Control and Prevention and $25 million for the National Institutes of Health to conduct public health research into firearm morbidity and mortality prevention.

Each mass shooting is disturbing, Byron said, but because she is a former teacher and principal, the ones at schools particularly affect her. The first school shooting she remembers is the April 20, 1999, shooting at Columbine High School in Littleton, Colorado, in which two teenagers killed 13 people and wounded more than 20 others before killing themselves.

After the Sandy Hook Elementary School shooting in 2012 in which 20 children and six adults died, Byron encouraged the Adrian Dominicans to bypass the usual restrictions against owning gun stocks in order to try to effect change at the corporate level.

"I remember thinking that if we don't do something now, we never will," she said. 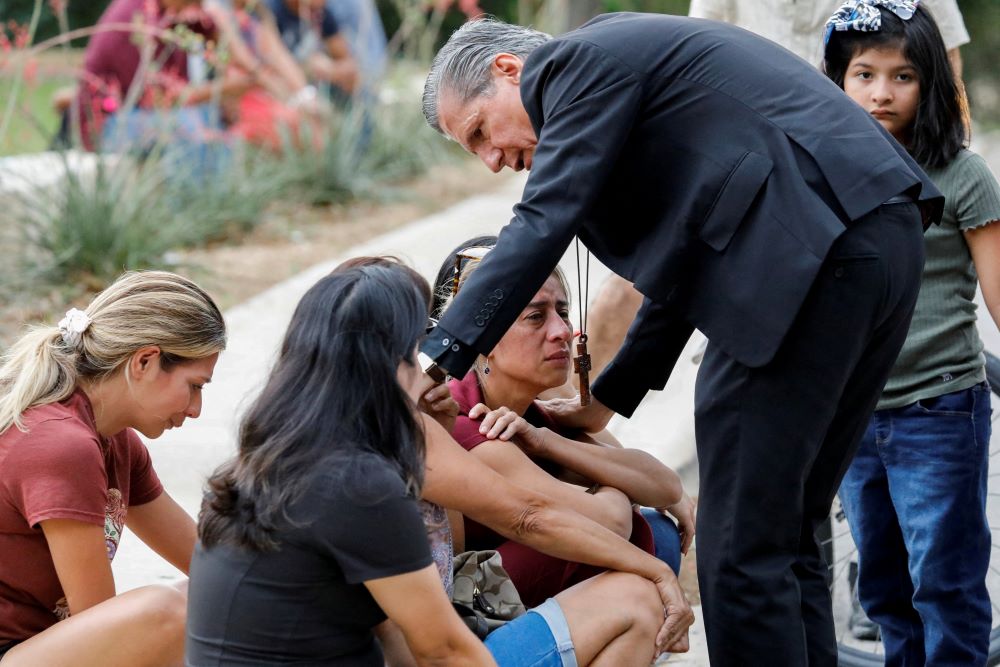 Archbishop Gustavo García-Siller of San Antonio comforts people in Uvalde, Texas, outside the SSGT Willie de Leon Civic Center, where students had been transported from Robb Elementary School after a mass shooting May 24. (CNS/Reuters/Marco Bello)

There have been some victories on the corporate front. A shareholder resolution at Ruger's May 2018 annual meeting backed by more than a dozen shareholders required Ruger to report on its efforts to improve gun safety.

The widespread reaction and anger in the wake of the Parkland shooting prompted big institutional investors to back the proposal, and it passed. Smith & Wesson shareholders approved a similar resolution.

When the reports proved disappointing in their disclosures, Byron, other congregations and faith-based investors as part of the Interfaith Center on Corporate Responsibility have since pushed for changes in a hard-fought and incremental effort to effect change at companies within rules allowing shareholder action by the U.S. Securities and Exchange Commission and in the face of the gun lobby.

Amid the outpouring of statements expressing sorrow and solidarity with the people of Uvalde, U.S. sisters added their voices to those of Pope Francis and some Catholic bishops and other faith leaders calling for stronger efforts to curb widespread gun violence.

In their statements, the congregations — noting other recent acts of mass gun violence, including one in Buffalo, New York, 10 days earlier — stressed that words of prayer are insufficient and called on lawmakers to enact tougher gun safety measures.

"We refuse to accept a world in which thoughts and prayers are offered without meaningful policy change to address the crisis of gun violence in this country," the Sisters of Mercy of the Americas said in their May 25 statement. "While we grieve alongside the families and community in Uvalde and those still grieving in Buffalo, we renew our call on state legislatures and Congress to enact more comprehensive laws limiting access to deadly weapons."

In its statement, the National Advocacy Center of the Sisters of the Good Shepherd said an initial reaction "is to cry out and to pray," adding that the center "offers our prayers for the souls of the dead. We offer prayers for solace and peace and recovery for the injured and those who witnessed the shootings. And we offer special prayers for the heartbroken families, friends and communities."

Related: Q & A with Sr. Judy Byron on forcing Sturm Ruger to report on gun safety

Yet Fran Eskin-Royer, the executive director of the center, which is the Sisters of the Good Shepherd's advocacy arm, also noted in the statement, "we indeed have a gun problem in America. There are too many guns and they are too easy to get," she said. "We must use the laws already on the books and we must pass additional common-sense legislation such as strengthening background checks and banning assault weapons."

In its May 25 statement, the General Council of the Adrian Dominican Sisters called for prayer but also what it termed "common sense gun safety laws" in the wake of the recent shootings. It also noted that a third incident — the day after the Buffalo shooting that killed 10 — occurred at a Presbyterian church in Laguna Woods, California, resulting in one death and five injuries.

"Our hearts are broken and enraged that another community in our nation has suffered the ravaging impact of mass murder at the hands of easily obtainable rapid-firing weapons," the statement said.

"We do not know what motivated the 18-year-old to massacre 19 elementary school children and two teachers, injuring numerous others, including his grandmother. We do know that no other country in the world not at war has rampages like this on such a shatteringly recurring basis."

The statement asked, "How many children and adults whose lives have been taken by gun violence in the last decade might still be alive today if our nation had common sense gun safety laws? A majority of Americans support common sense restrictions on gun ownership."

The Adrian Dominicans called on members of Congress to "enact legislation that bans access to militarized assault weapons with high-capacity ammunition magazines, provides for background checks, and restricts concealed weapons, among other steps."

National polling on the issue at the end of 2021 showed that majority of Americans, 52%, said they wanted stricter gun safety measures, according to a Gallup poll.

A 2022 survey from Pew Research Center said that just 38% of Americans agreed with Republicans on gun policy. But Republicans have largely relied on their home constituencies as their guide as to how to vote, not on national opinion.

"Most would probably throw me out of office," Sen. Kevin Cramer, a Republican from North Dakota, told the New York Times on what would happen if he supported gun-safety legislation.

The Association of U.S. Catholic Priests, which joined the women religious in their calls, said voters should make an effort to remove from office politicians who refuse to work for meaningful gun violence reform.

"Indeed, our courts and legislatures should be able to develop solutions that do not violate anyone's constitutional rights, including the right to live granted by the fourteenth amendment. We call on our elected and appointed officials to do so. If they cannot, we need to replace them," the organization said in a statement.