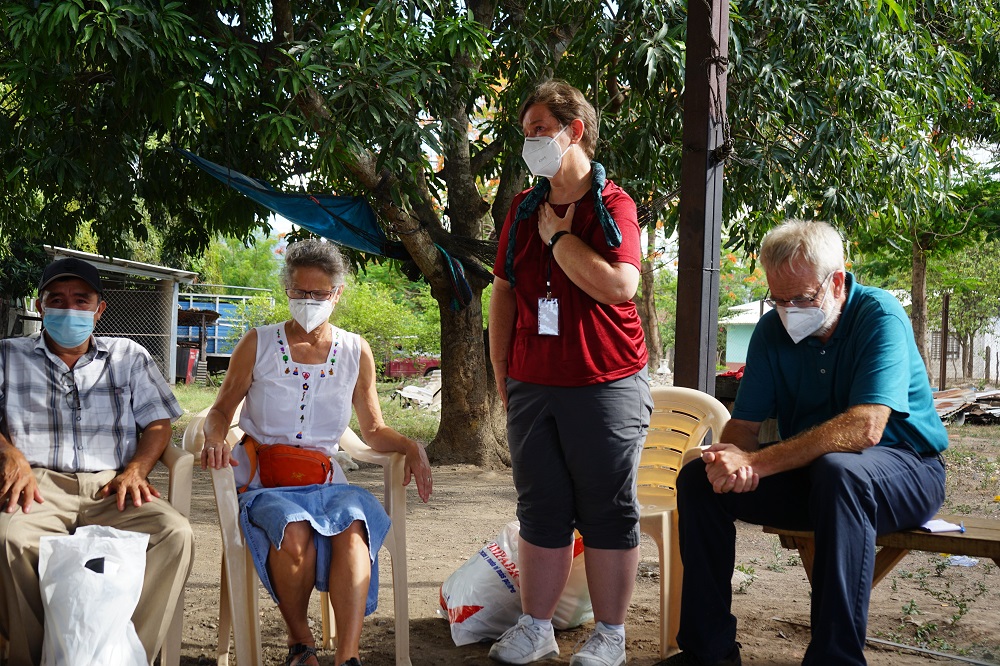 Mercy Sr. Mary Kay Dobrovolny, standing, speaks with a delegation from the U.S. in Honduras in early July. In the solidarity trip, the U.S. visitors learned about conditions that fuel northward migration. (CNS/Courtesy of SHARE)

Franciscan Sr. Mary Kennedy traveled from the United States to Honduras recently to show solidarity with communities affected by natural disasters and fighting the dispossession of their lands.

Her solidarity team also went to learn why so many people are abandoning the Central American country in hopes of reaching the United States.

What she learned brought back a sense of déjà vu, having served in neighboring Guatemala between 1988 and 1994 and working with populations displaced by armed conflict.

"U.S. economic policies and military objectives have created the problems in Central America," Kennedy told Catholic News Service by phone from Philadelphia, where she is based.

"We should be opening wide the doors to receive those who want to come but, better still, we should be providing opportunities for the people to remain home, where they want to be, with their loved ones and to have a life with dignity and respect," she said.

Kennedy was part of a solidarity trip to Honduras in early July organized by the SHARE Foundation and hosted by Radio Progreso, which was founded by Jesuit Fr. Ismael Moreno Coto and serves rural communities. The Sisters of Mercy and the Leadership Conference of Women Religious supported the trip.

Organizers said the trip showcased some of the factors driving migration in recent years, including violence, poverty and a loss of hope in Honduras because of poor governance and corruption.

Those problems were compounded by the COVID-19 pandemic and the November 2020 twin hurricanes — Eta and Iota — that flooded much of northern Honduras. 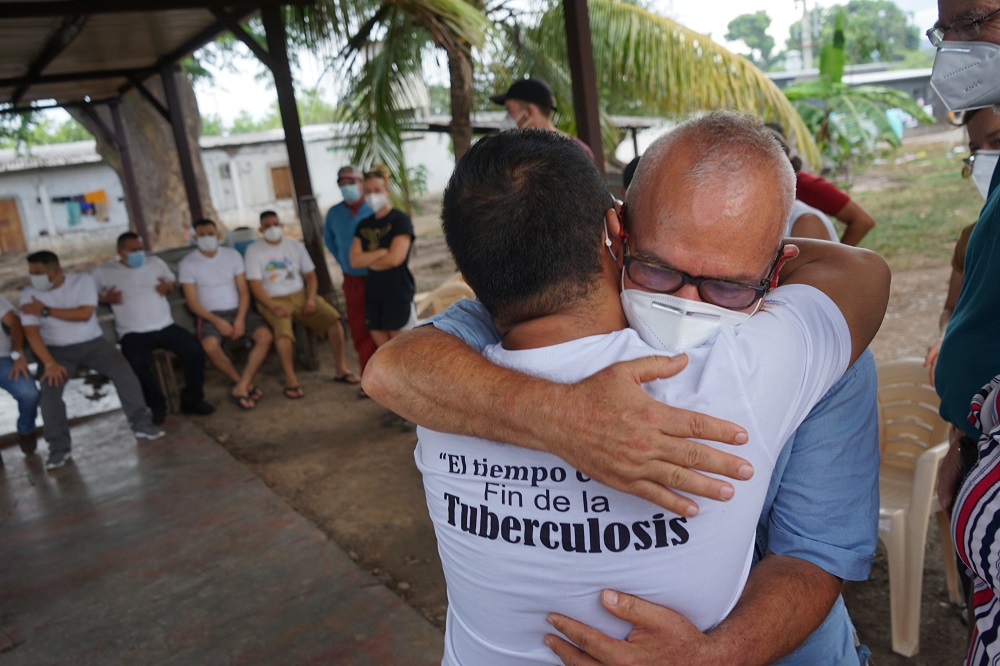 José Artiga, executive director of SHARE, with glasses, embraces one of the detained environmental activists in early July at "Guapinol 8," where the activists have been detained for two and a half years for protesting against a mine polluting the Guapinol River in northern Honduras. (CNS/Courtesy of SHARE)

The government response to both crises proved inept, with aid failing to reach potential recipients. Thousands of homeless families were forced to live in squatter camps. At a camp the delegation visited, armed security guards employed by the landowner appeared the next day, even though the land being occupied had sat empty for the 35 years.

"The government hasn't been transparent and there's been corruption, and communities didn't receive much help in terms of prevention or medicines in clinics," José Artiga, executive director of SHARE, said of the pandemic response.

"The two mega-hurricanes kind of put the final nail in the coffin," he said.

The delegation also visited the "Guapinol 8," eight environmental activists who have been detained for nearly two years for protesting against a mine polluting the Guapinol River in northern Honduras. Observers have said their plight is common in Honduras, where those who defend the environment are murdered with impunity and Indigenous people are pushed off their land by mining, tourist and agricultural interests. Such cases of dispossession drive migration, they said.

"They're losing all of that land that was theirs ... and it's very, very painful to watch and they're almost without hope. Our visit is like giving them an injection of hope to carry them on to the next visit," Kennedy said.

The Sisters of Mercy have called for advocacy on the issue, urging Congress to pass bills that would suspend assistance and support for Honduran security forces until human rights violations are no longer systemic.

"The U.S. government is continuing to support a very corrupt and militaristic government, and the U.S. is providing money for Honduran security forces, and those security forces, both police and military, are repressing the people," said Mercy Sr. Mary Kay Dobrovolny, one of those on the trip.

"The aid that is going down there is not serving the people," she told CNS.

Dobrovolny, who recently relocated from Nebraska to the southern U.S. border and has been working with migrants, said the trip changed her way of thinking about migration and why migrants are traveling north in such large numbers.

The solidarity trip came as the administration of President Joe Biden is implementing promised changes to U.S. immigration policy even as it is trying to discourage migrants from arriving at the border. Vice President Kamala Harris recently traveled to Guatemala, where she told migrants not to leave.

However, the challenges are enormous, especially in Honduras. A U.S. court convicted Tony Hernández, brother of Honduras President Juan Orlando Hernández, on drug-trafficking charges in 2019.

"The case of Honduras is a hard one because the brother of the president is a narco. There is nothing more clear than that," said Artiga, who has been working in Honduras for about a decade and even longer in El Salvador.

"The hope [the U.S.] has is that a new person will be elected who will be cleaner," he said, referring to elections to be held later this year. "But policy will likely stay the same."