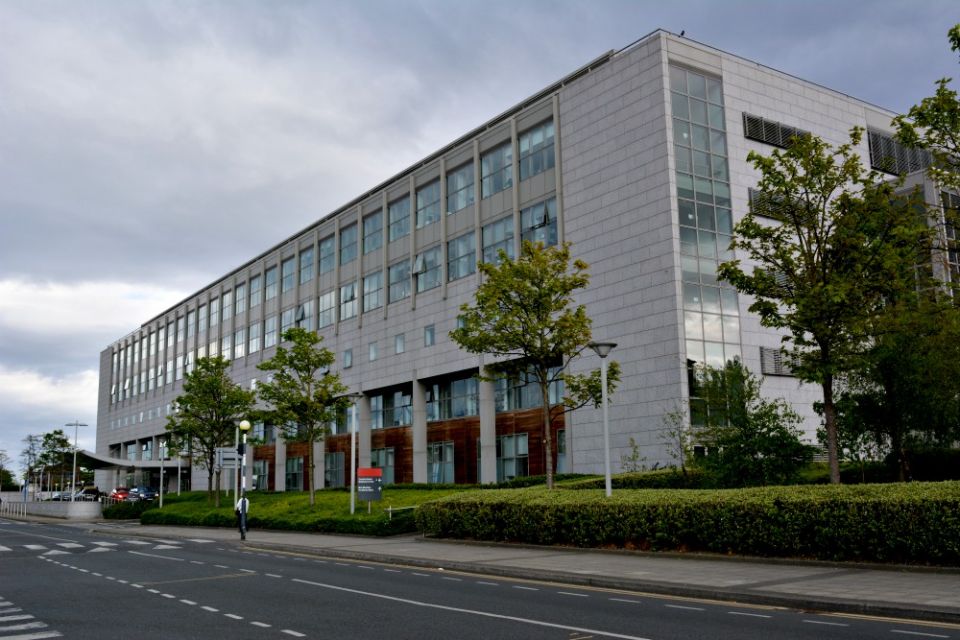 Dublin — On May 8, the Religious Sisters of Charity announced they had received Vatican approval to relinquish their 100% shareholding in St. Vincent's Healthcare Group in Dublin.

In a statement, the sisters said they intended to gift the 28.67 acres that house St. Vincent's University Hospital and St. Vincent's Private Hospital in Dublin and 3.21 acres at St. Michael's Hospital in Dun Laoghaire, worth 200 million euros, to the people of Ireland. They will transfer their shareholding to a new independent, charitable body to be called St. Vincent's Holdings CLG.

In the community's statement, Sr. Patricia Lenihan, superior general of the Religious Sisters of Charity, said the sisters "are very proud of our long heritage and work to establish and provide healthcare services for the sick and poor in Ireland. It has been both a privilege and an honour to serve and support patients and their families over the last 186 years."

From the first 12-bed institution to its 600 beds today, St. Vincent's has had a long and distinguished medical history, winning awards for excellence and research with its partners. But the 171 Religious Sisters of Charity, with an average age of 81, are ready to pass on the baton.

The Vatican Congregation for Institutes of Consecrated Life and Societies of Apostolic Life approved the Religious Sisters of Charity's request to relinquish its shareholding in St. Vincent's on March 16. The wording of the Vatican's approval granted the Irish nuns "permission to transfer the entire issued share capital of St Vincent's Healthcare Group to St Vincent's Holding for the nominal sum of €1," the Irish Independent reported.

In May 2013, it was announced that the National Maternity Hospital would relocate from its current site at Holles Street in Dublin city center to a more suitable site within St. Vincent's Hospital campus, just under 4 kilometers away. Planning permission for the building of the new hospital at St. Vincent's campus was granted in 2017. But a protracted row over the governance and clinical independence of the new hospital continues to stall the project.

Historically, the sisters were also involved in running some of the industrial schools investigated by the 2009 Ryan report. Compensation to former residents of institutions run by 18 congregations has amounted to 1.25 billion euros, with the greater part paid by the Irish state.

The Religious Sisters of Charity told Global Sisters Report that the congregation has met all of its financial commitments under the various redress schemes and has no outstanding payments. However, the community's association with these chapters in the country's religious and social history has cast a shadow over the sisters' other work in hospice care, trafficking prevention, and teaching.

In 2017, protesters took to the streets of Dublin, and more than 100,000 people signed a petition against the sisters' possible involvement in the new National Maternity Hospital, as they owned the land on which the hospital is to be built.

In response to the criticism, the Religious Sisters of Charity signaled their desire to stand back from any involvement in St. Vincent's and the new National Maternity Hospital. Their two sisters on the board of St. Vincent's Hospital Group stepped down in 2017, and the community pledged to transfer its shares in the St. Vincent's Healthcare Group into the new charity, St. Vincent's Holdings CLG.

Following the sisters' announcement in May that they had received Vatican approval to relinquish their shareholding in St. Vincent's, Dr. Peter Boylan, a former master of the National Maternity Hospital in Holles Street, asked for proof that St. Vincent's Holdings CLG would be entirely secular.

"The congregation's statement does nothing to allay my concerns," he wrote in a May 17 column in the Sunday Business Post. "Will St Vincent's Holdings CLG be an entirely secular entity, with no obligation to adhere to Catholic teaching, or will it follow the pattern of the vast majority of transfers of Catholic property and shareholdings, which are called 'alienation' under canon law, and be obliged to uphold Catholic ethos in continuance of the mission of the Religious Sisters of Charity?"

Boylan has repeatedly called for the community to publish its correspondence with the Vatican so it can be publicly scrutinized. He said he is skeptical that the Vatican would approve the transfer of Catholic assets to a health care organization that would permit procedures such as elective sterilization, abortion and in vitro fertilization that go against Catholic teaching.

"I cannot find a single example anywhere in the world where the Vatican has approved the transfer of assets of a Catholic congregation to a company that will own a hospital providing women's healthcare services absolutely prohibited by Catholic teaching," he wrote in his column.

Instead, Boylan said, it is common to see the transfer of such entities into public juridic persons. These structures are used to transfer ownership from congregations that can no longer maintain their institutions, often as the numbers of religious dwindle with age, while ensuring the Catholic values and mission of the congregation are retained.

"Unless it can be proved beyond all doubt that the Holy See has, in fact, made the momentous decision to transfer the ownership of [St. Vincent's Healthcare Group] out of Catholic control, with no requirement for upholding the original Catholic mission into the future, the new National Maternity Hospital will be subject to a Catholic ethos as matters currently stand," he wrote in his column.

Boylan resigned from the National Maternity Hospital's board in April 2017, saying the new taxpayer-funded maternity hospital would be subject to Catholic values because of the Religious Sisters of Charity's ownership of the land at St. Vincent's and, by extension, the new facility.

However, a spokesperson for St. Vincent Hospital told The Irish Times that St Vincent's Holdings CLG is not a public juridic person.

"We have always been clear that all medical procedures permitted under Irish law are provided in our hospitals and will be provided in the new NMH," she said. "Once the entity is set up and the nuns have handed over the property, the holding will be an entirely independent secular civic body controlled solely by Irish law."

Meanwhile, Simon Harris, the minister for health, on May 8 welcomed the congregation's announcement and said the Vatican approval removes "any remaining concerns" that there could be a religious influence at the new National Maternity Hospital. 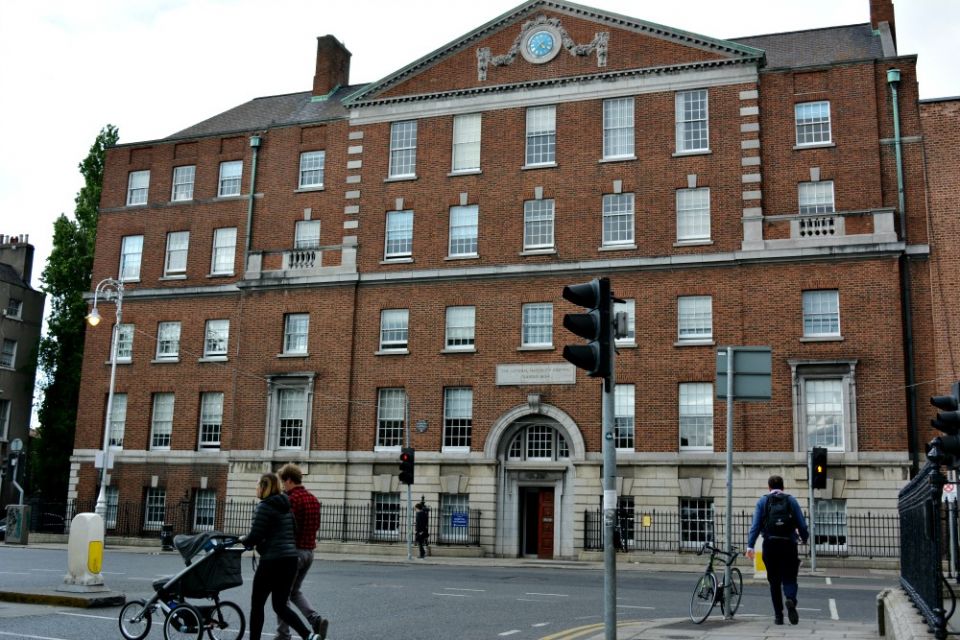 The National Maternity Hospital at its current home on Holles Street in Dublin, in 2017 (Sarah Mac Donald)

Seven leading medical consultants in Dublin said in a letter to the Irish Times that they are "entirely satisfied" that their clinical independence will "remain unfettered" at the new National Maternity Hospital when it opens on the grounds of St. Vincent's.

The consultants recalled the terms of the 2016 Mulvey Agreement between St. Vincent's and the National Maternity Hospital on Holles Street, which agreed that the new hospital would have clinical, operational and financial independence "in the provision of maternity, gynecology, obstetrics and neonatal services (without religious, ethnic or other distinction)."

A canon lawyer who spoke anonymously to the Irish Times said the Vatican decision means the Catholic Church's doctrine will have "no authority or control" over either the new St. Vincent's Holdings CLG or the new hospital, and there is no way "such authority or control could be exercised."

The sisters have the support of two of the Irish church's most senior prelates: Archbishop Eamon Martin of Armagh, primate of all Ireland, and Archbishop Diarmuid Martin of Dublin.

A spokesman for Eamon Martin confirmed to Global Sisters Report that the leader of the Irish church supported the Religious Sisters of Charity's request and that he relayed to the Vatican that there was "a serious need for a proper National Maternity Hospital (NMH) in order to be able to provide high quality maternity healthcare for mothers and their babies in contemporary Ireland."

Eamon Martin told the Vatican that his understanding was that the sisters had already withdrawn from management and St. Vincent's had already effectively been alienated in all but name.

In his correspondence, which he sent through Archbishop Jude Okolo, the papal nuncio to Ireland, Eamon Martin said in caring for mothers and their unborn children both in the pre- and postnatal periods, the work of a maternity hospital ought by definition to be pro-life.

"It is about offering safe maternity treatment and care for expectant mothers and their babies, both born and unborn," he wrote.

However, the archbishop of Armagh also said the carrying out of abortions or morally illicit medical procedures at the maternity hospital would be "repugnant to clearly enunciated Catholic moral teaching" and the church would remain clear in its public statements that there is no place in a maternity hospital for abortion.

Harris, the minister for health, said the sisters have paved the way for "the finalization of the legal framework which will protect the state's investment in the new hospital and ensure that the new National Maternity Hospital will have clinical and operational, as well as financial and budgetary independence in the provision of maternity, gynecology and neonatal services."

Construction should now get underway, but the cost of the build may have increased from its originally estimated 300 million euros because of the delays and years of wrangling over the thorny question of ethos.