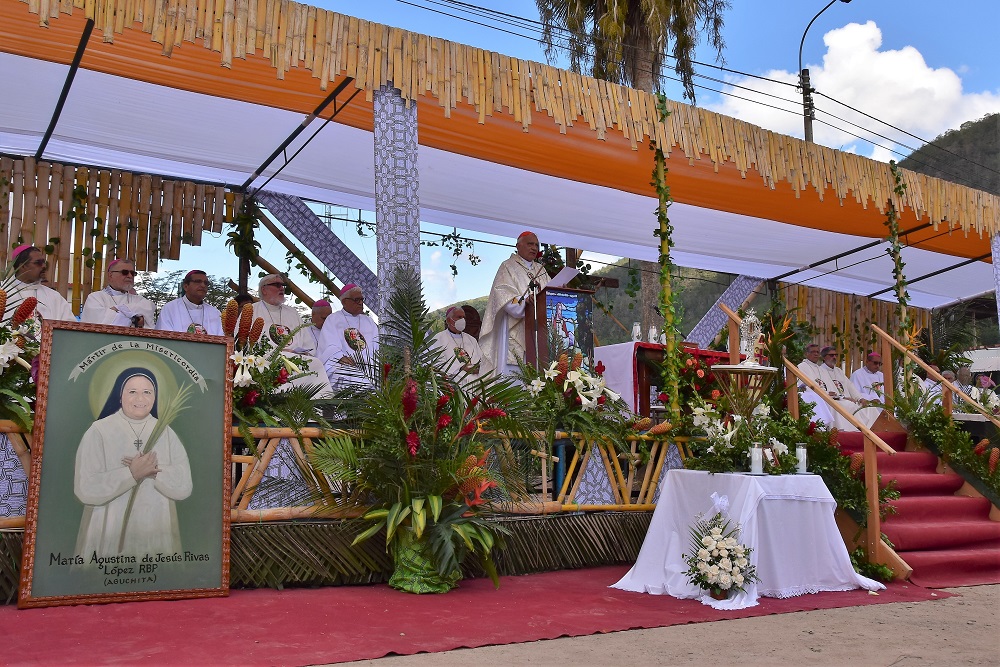 The altar during the May 7 beatification Mass for Good Shepherd Sr. Maria Agustina Rivas Lopez in La Florida, in Peru's central Amazon region, where she was murdered by terrorists in 1990 (CNS/Courtesy of REPAM/Julio Caldeira)

Good Shepherd Sr. María Agustina Rivas Lopez, who was murdered by terrorists during Peru's political violence, was beatified May 7 during a liturgy in the same plaza where she was shot to death in 1990.

The altar, adorned with local tropical plants and flowers, was set up outside the simple, red-roofed Catholic church in La Florida, a small town in the central Amazonian Vicariate of San Ramon.

A reliquary, adorned with leaves fashioned from silver and containing relics of Rivas, who was known affectionately as "Sor Aguchita," was placed on a table before the altar. The offertory gifts included a basket of bread, a coffee plant, cassava tubers, cacao pods and fruit, all crops typical of the area.

With her life and her death, Rivas put her faith in peace, not in violence, Bishop Gerardo Zerdin of San Ramon told Catholic News Service. She also leaves an example of an "option for the Amazon, nature, the environment," he said, and "a great urge to serve others. with a complete absence of economic interest."

In his homily at the beatification Mass, Venezuelan Cardinal Baltazar Porras Cardozo, who represented Pope Francis at the ceremony, highlighted Rivas' humility and willingness to serve others, her preferential option for the poor and her devotion to the Blessed Mother and St. Joseph from an early age. 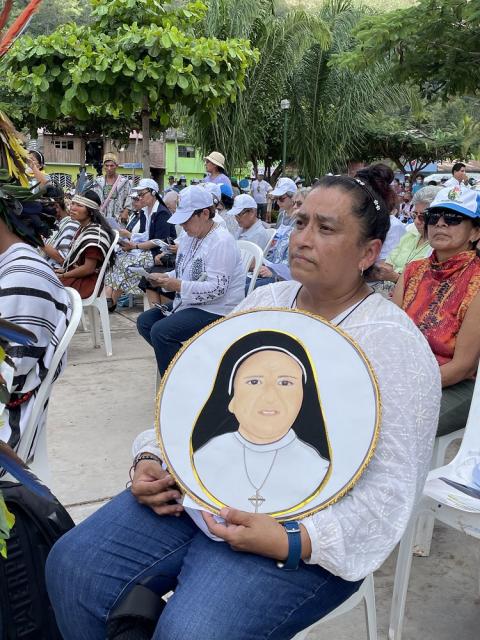 A woman holds an image of of Good Shepherd Sr. Maria Agustina Rivas Lopez during Rivas' beatification Mass on May 7 in La Florida, in Peru's central Amazon region, where she was murdered by terrorists in 1990. (CNS/Peruvian Conference of Bishops/Kurth Mendoza)

Her martyrdom, he said, highlighted "the senselessness of violence, crime, injustice, and the evil of ideologies in which human life means nothing. The indiscriminate use of weapons leaves only death and desolation; it does not solve real problems of human coexistence."

Porras added: "May guerrillas and war disappear forever from the entire world and from this blessed land of the Amazonian jungle. May we be capable of healing pain and contempt, ensuring, slowly building the globalization of solidarity without excluding anyone."

After his "Regina Coeli" message May 8, Pope Francis called for a round of applause for the newly beatified sister, saying, "While aware she was risking her life, this heroic missionary always remained near the poor, especially Indigenous women and peasants, witnessing to the Gospel of justice and peace. May her example spark the desire in everyone to serve Christ faithfully and courageously."

Rivas was born in 1920 in Coracora, in the southern Andean region of Ayacucho, in 1920. With assistance from Redemptorist priests in her area, she traveled to Lima at age 14 to study at a school run by the Sisters of Charity of the Good Shepherd. She entered the congregation in 1940 and made her final vows in 1945.

For most of her life, she worked as an educator, catechist and nurse in Lima, but in 1988, she moved to the community's mission in La Florida to work with Indigenous women and children, especially in health and education.

By that time, the violence by the Maoist Shining Path and the Marxist Tupac Amaru Revolutionary Movement, which was met in turn by violent repression from security forces, had spread throughout most of the country. The Shining Path was known for entering villages, forcing residents to gather in plazas and executing local government officials and others they considered obstacles to their efforts to overthrow the government.

When Shining Path guerrillas arrived in La Florida on Sept. 9, 1990, they looked for the sister in charge of the mission, whom they accused of deterring local people from following the group's ideology. When they did not find her, a 17-year-old member of the group shot and killed Rivas and six local men.

During a prayer vigil the evening before the beatification, Rivas' tomb in La Florida's church was surrounded by candles and photos of the other victims of the massacre. At the beatification Mass, prayers were offered for those men and their families.

During more than a decade of internal conflict, which began in 1980, a number of bishops, religious and lay human rights workers spoke out against the terrorism. The Truth and Reconciliation Commission, which documented the violence, noted that in much of the country, "the Catholic Church was a voice in denouncing crimes and violations of human rights, in proclaiming and defending the right to life and the dignity of all people."

Subversives, especially the Shining Path, saw that as a challenge to their plans. Between 1990 and 1991, Shining Path guerrillas executed Rivas and Sr. Irene McCormack, an Australian member of the Sisters of St. Joseph of the Sacred Heart, in the central Junin region, and three priests, Polish Frs. Michal Tomaszek and Zbigniew Strzalkowski and Italian Fr. Alessandro Dordi, in the central highland region of Ancash. The priests were beatified in 2015.