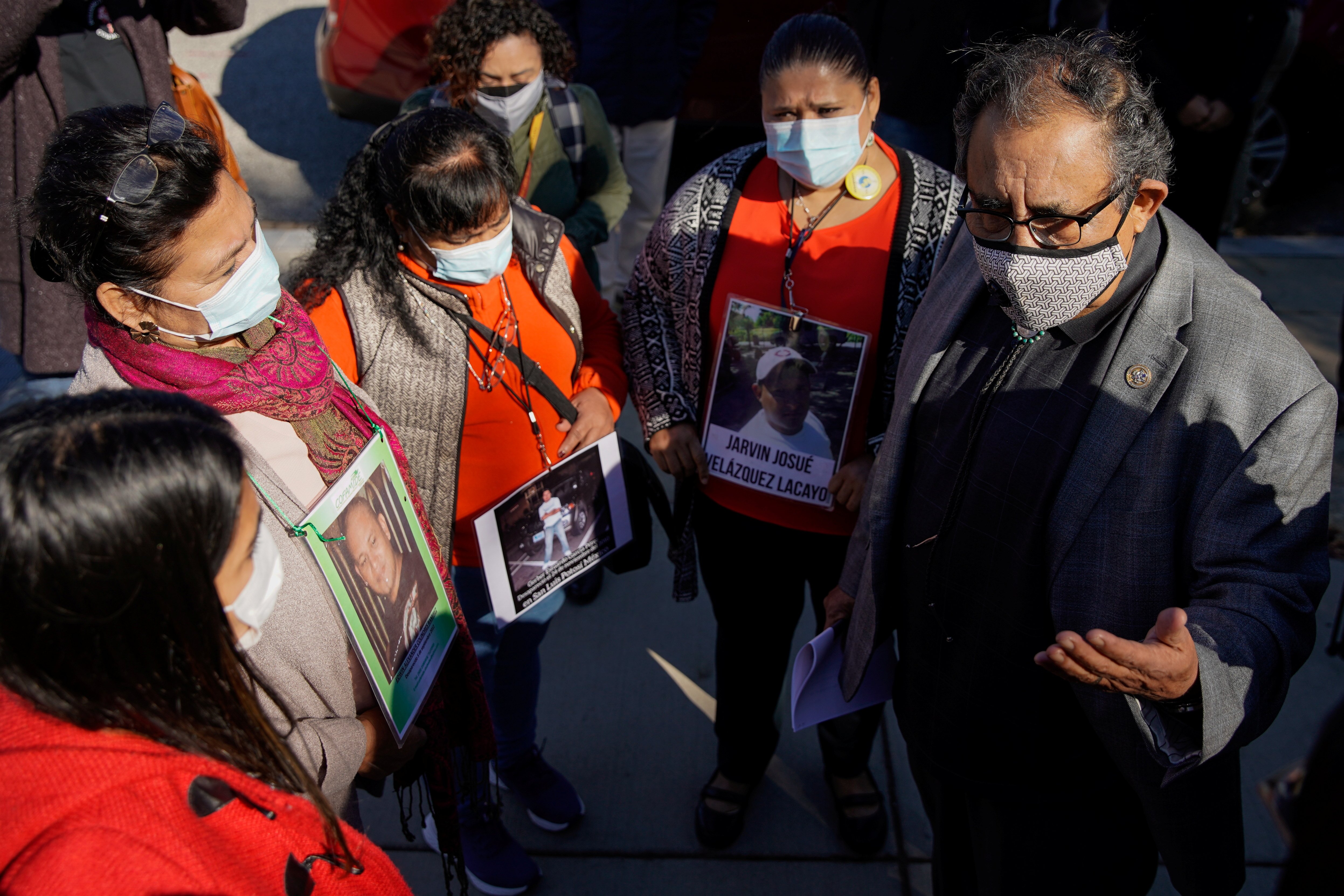 U.S. Rep. Raul Grijalva, D-Ariz., speaks with women with the Caravan of Mothers of Disappeared Migrants on Capitol Hill in Washington on Oct. 19, after they shared stories of missing family members. (CNS/Reuters/Elizabeth Frantz)

A group of women looking for sons and daughters who were never heard from again after migrating to the U.S. traveled in mid- to late October throughout the country to plead for better immigration laws.

The Caravan of Mothers of the Disappeared, a project backed by Pax Christi USA and the Sisters of the Mercy of the Americas, helped spotlight the plight of the group of women, who made a stop in Washington on Oct. 19 to meet with members of Congress.

"As I listened to them, the women, it's heart-wrenching," said Mercy Sr. Anne Marie Miller in an Oct. 20 interview with Catholic News Service. "It touches you to hear the suffering."

On Oct. 20, the mothers, often only giving their first names, participated in an online event and talked about their family members, how and why their sons and daughters left their home countries, their last whereabouts and the last time they spoke to them. They also shared how they had dropped off samples of their DNA with authorities at the border in hopes of one day finding out what happened to them.

Many of the stories mirrored the one told by Aracely, a mother from El Salvador, who last heard from her son, Edwin Alexander Colindres, more than nine years ago. He had set off for the U.S. to work. He was in communication with his mother through part of the journey north, then she never heard from him again.

A woman named Bertila said she found her son, "but not the way I had hoped. ... I never expected to find him among the dead," she said. He was kidnapped by drug cartels in Tamaulipas, Mexico, and his remains were later identified in a mass grave.

"I'm here to support the mothers," she said. "All along the border, there are thousands and thousands of remains. I had to fight for years for the remains of my son. I asked everyone for help, but no one wants to help the poor."

Like many of the other mothers, she had seen her son leave, looking for work he couldn't find at home. She called for better paths to enter the U.S., ones that won't put people in danger.

Miller, who joined the women when they gathered outside the U.S. Capitol on Oct. 19, said it was important to advocate for them in Congress, pointing out that past U.S. policies "have not helped" the situation of certain countries, including root causes that have caused so many to leave.

"We have to do something ... use our voices as women religious," she said, adding that organizations such as the Leadership Conference of Women Religious have long advocated for justice in such situations.

During the online meeting, the women traveling around the U.S. joined a group of women who also had lost their sons and daughters during a migration journey, but on the other side of the world. Many of them, in Tunisia, were looking for children who had died in the Mediterranean, likely by drowning. They comforted their counterparts in the Americas saying they joined them in the global fight.

"We look for them because we love them," shouted one of the women from the caravan in the United States.

Miller said that as women religious, the Mercy sisters wanted to offer them comfort, letting them know that "there's always welcoming and compassion," for them.

"Just from the human factor, no one should have to endure separation from their children," she said, adding that that's why there's emphasis on solving problems in the countries where migrants come from. "There's a reason they leave. There's violence, economic conditions, the extractive industry is really ruining communities, causing great devastation, climate change, drought, kidnappings."

And as Christians, Scripture says that "in our tradition, we welcome the stranger," Miller said.

"We treat one another as we want to be treated," she said. "We really want to support and send our love to these women and the migrants who are coming, let them know we'll help."