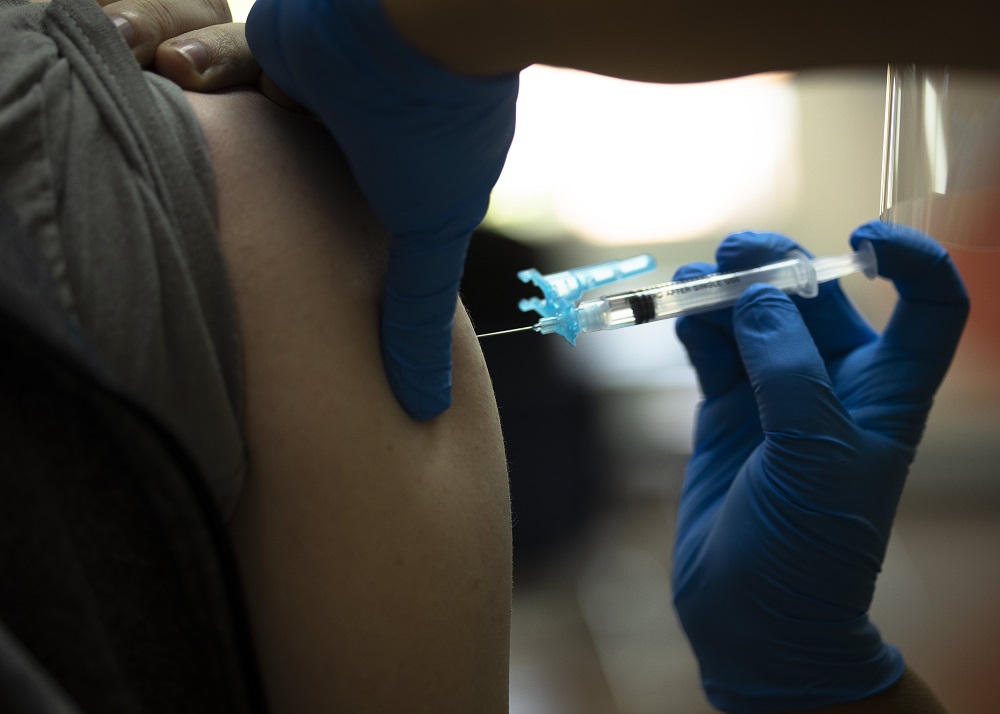 A health care worker at Catholic Charities in the Brookland neighborhood of Washington, D.C., administers the Johnson & Johnson COVID-19 vaccine May 18, 2021. (CNS/Tyler Orsburn)

A woman religious who as a physician provides free medical service in the nation's capital has sued the District of Columbia over its COVID-19 vaccination mandate for health care workers.

Sr. Dierdre Byrne said in a federal lawsuit filed March 9 that city health officials denied her a religious exemption from the mandate, an action she said violates her rights under the Religious Freedom Restoration Act and the First Amendment of the U.S. Constitution.

Attorneys for the Thomas More Society filed the lawsuit in the U.S. District Court for the District of Columbia on behalf of Byrne, who is a member of the Little Workers of the Sacred Hearts and a retired U.S. Army colonel. She is board certified as a surgeon and in family practice, the society said.

Society attorney Christopher Ferrara said in a statement that Byrne had "sought — and been denied — a religious exemption from D.C.'s health worker COVID-19 mandate."

"All three COVID-19 vaccines approved in the United States have been tested, developed, or produced with cell lines derived from abortions, something to which Sister Dierdre has deep and sincere religious opposition," Ferrara said.

Some Catholics object to the use of COVID-19 vaccines because the animal-phase testing for some vaccines used stem cells from fetuses aborted 50 years ago. The Congregation for the Doctrine of the Faith declared all of the vaccines to be morally licit in December 2020, and the Vatican recently updated its rules to require all of its employees to be vaccinated against the virus or prove they have recently recovered from the disease.

Church teaching does not, however, authorize coercive medication. In its 2020 document, the doctrinal congregation noted a vaccine "is not, as a rule, a moral obligation ... and must be voluntary."

The lawsuit said Byrne waited nearly six months for the city to consider her "amply documented request for a religious exemption from the vaccine mandate." It also said she has practiced medicine without need of vaccination and without objection from the hospitals and clinics for which she provides volunteer medical services for people in need.

The society said her request was "denied with an unsigned letter in draft form sent via email" even as the city acknowledged the "sincerity" of her religious objection to vaccination.

"The only stated basis for the denial is the legally nonexistent grounds that her religious exemption would pose an 'undue hardship' " to the city's health department, the society said.

The society maintained that because Byrne is not a city employee, the city's health department cannot suffer a hardship because she offers free medical services.

The society also said in her request for an exemption to the mandate, Byrne stated that vaccination was unnecessary because she had contracted COVID-19 and "remains naturally immune to it."

In response to the lawsuit March 10, a health department spokesman told Catholic News Service, "DC Health does not comment on pending lawsuits."