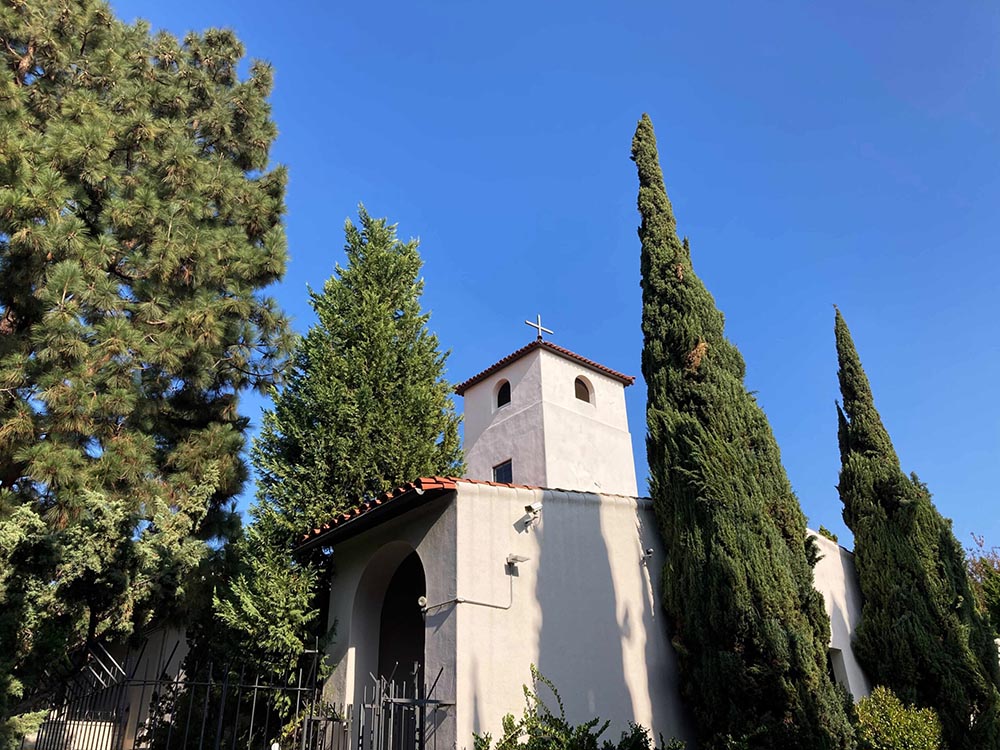 Founded in 1924 by a New Jersey nun, the Monastery of the Angels is home to a community of cloistered Dominican nuns who devote their lives to Scripture and prayer. (RNS/Alejandra Molina)

Fearing the Monastery of the Angels could be sold for private use or redevelopment, Los Angeles preservationists and advocates are forming a nonprofit as they seek to acquire and take responsibility for the beloved Hollywood home to cloistered Dominican nuns.

Over the years, the community has been dwindling as the nuns age and after some died from COVID-19 and other causes, making it difficult to sustain the monastery's "democratic way of life." The Dominican nuns have devoted themselves to studying Scripture and to praying for those who come to them for guidance and penance.

An online petition to "Save the Monastery of the Angels" emerged last year, with LA residents referring to the four-acre property as a "retreat" and an "oasis" amid the clamor of the city. It has garnered more than 4,200 signatures as of May 20.

Local prioress Sister Maria Christine — president of the Association of North American Dominican Monasteries — said in December that no decision had been made to sell, adding that the Dominicans were "looking at many options and trying to find the best suitable resolution." One of those options included seeking other religious communities who could manage the monastery.

"We continue to wait for the official canonical permissions in order to proceed. Our goal is to retain the beauty of the property and continue to be a source of spiritual enrichment for all who come to pray," she told Religion News Service in an email Friday. 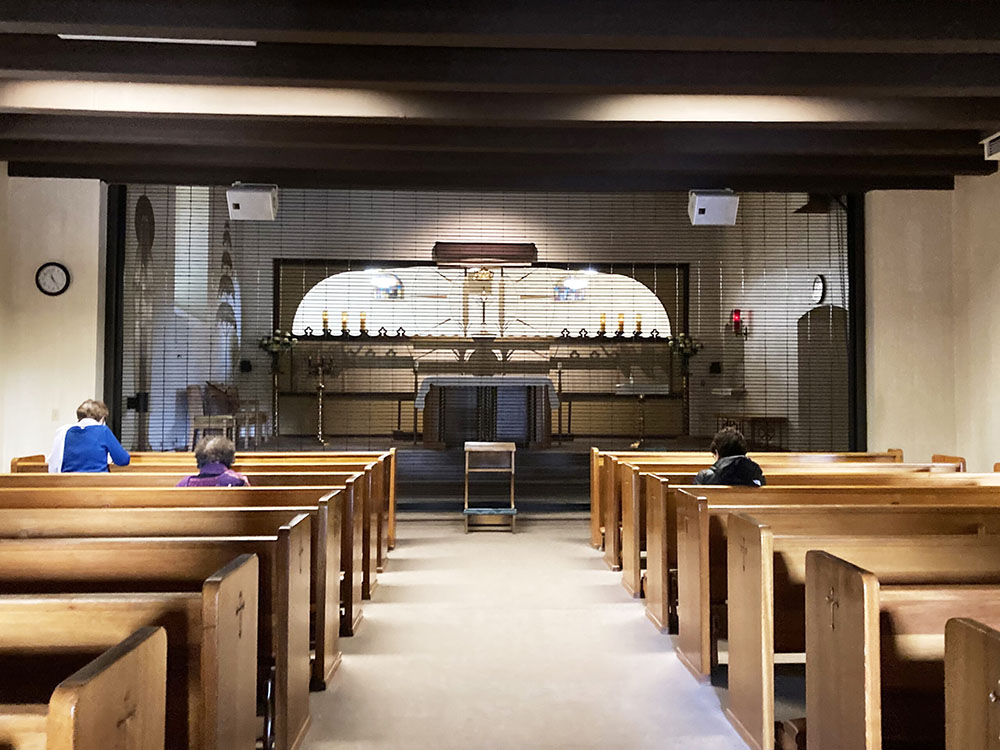 A handful of people visit the chapel on Dec. 8, 2021, for midday prayer at the Monastery of the Angels in Los Angeles. (RNS/Alejandra Molina)

"The world needs prayer and we keep everyone in our prayer intentions," she added.

But preservationists aren't taking any chances.

The Monastery of the Angels Foundation of Los Angeles, the nonprofit that's in the process of incorporating, wants to acquire the monastery to care for and maintain the property "as a Catholic sacred space," according to the Save The Monastery Of the Angels website that went live May 19.

"Losing the monastery to non-Catholic redevelopment will both deprive Catholics in Los Angeles of the ability to take spiritual nourishment from its grounds and also remove a place of prayer from a community that badly needs it," according to the website.

Behind that effort are:

"We need to be proactive," Schave said.

Schave said he agrees with Sister Maria Christine that the monastery should remain a space for spiritual enrichment, but "if we just let this go and put our faith in the Dominican Federation and the Holy See," he said, "I do not believe we will achieve that goal."

That part of town, Cooper said, has been subjected to overseas investors who "don't really have a sense of community."

"They just want to do as much as they can as quickly as they can, in order to profit," Cooper said.

Founded in 1924 by a New Jersey nun, the Monastery of the Angels has received financial support from wealthy LA families and celebrities such as the Dohenys, through the Carrie Estelle Doheny Foundation, and the late actress Jane Wyman, through the Jane Wyman Charitable Foundation. The nuns also bake and sell their famous pumpkin bread, peanut brittle, chocolate mints and other treats at the gift shop.

Advocates behind this effort plan a fundraising campaign aimed at Catholics and others in the area and across the nation. They will determine whether it makes financial sense to continue producing the pumpkin bread and other goods.

"Any income derived from the production of these goods will be solely spent on the care and upkeep of the monastery and its grounds," they said.

They'll also seek to retain the gift shop and explore the possibility of making the monastery available for retreats. 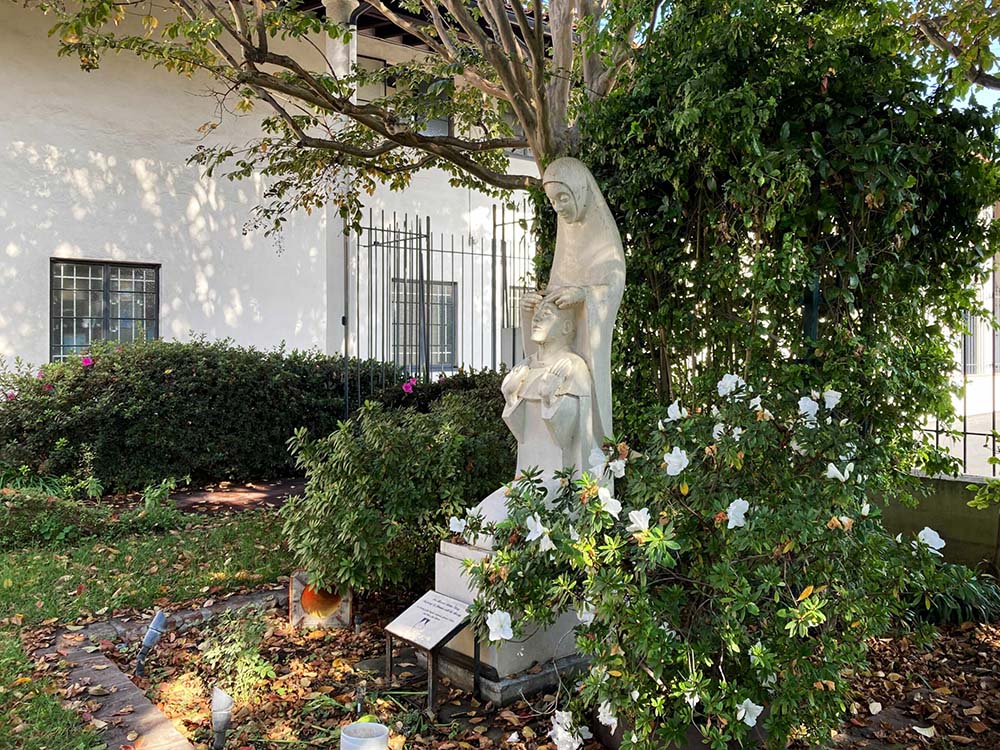 A statue of "Our Blessed Mother Mary Inspiring St. Dominic with the Rosary" stands at the Monastery of the Angels, a donation from the late actress Jane Wyman. (RNS/Alejandra Molina)

Even though Dominican nuns would no longer inhabit the monastery under their stewardship, the group envisions keeping the chapel open for the occasional celebration of Mass, sacramental activities, 24-hour eucharistic adoration and private prayer. Volunteers would be on hand.

There appear to be fewer than five nuns residing at the monastery.

The group is modeling its effort after other lay Catholics who have taken ownership of and responsibility for churches and monasteries across the country.

One example is the Save Our St. Anne's group that for years has maintained St. Anne's Church in Columbia, California. The parish is within the boundaries of the Stockton Diocese and Mass is celebrated there a few times a year.

"Those who wanted St. Mary's to remain a church available for occasional Masses stepped forward and took on the responsibility of caring for it and its grounds, at their own expense," the group said.