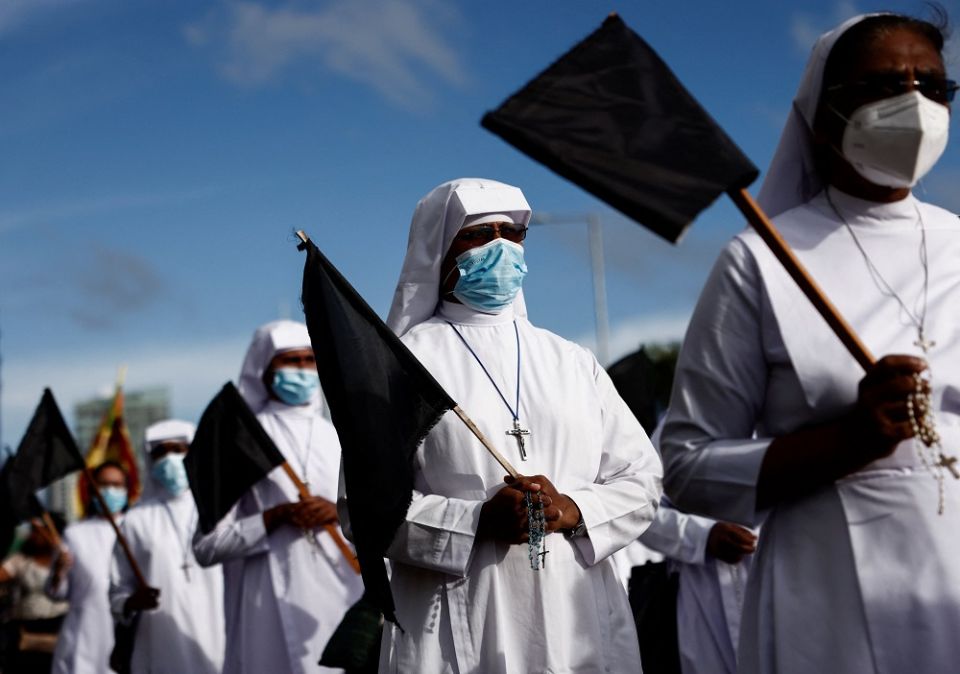 Women religious march with black flags during a May 28 protest in Colombo, Sri Lanka, demanding that President Gotabaya Rajapaksa step down amid the country's economic crisis. (CNS/Reuters/Dinuka Liyanawatte)

Colombo, Sri Lanka — Activists called on Sri Lankan authorities not to arrest an activist nun who has supported anti-government protesters.

Sr. Mary Sonali of the Congregation of the Apostolic Carmel was summoned by police June 7 to record a statement about an arson attack.

Shehan Malaka Gamage, a social activist and national convener of the Coalition of Catholic Lay Organizations, said June 8 that Sonali was accused of aiding violence and inciting people to set fire to houses, ucanews.com reported. 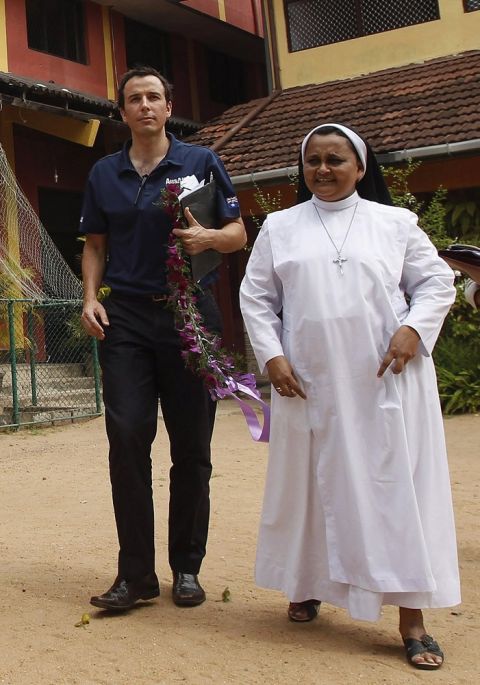 Sr. Mary Sonali of the Congregation of the Apostolic Carmel is pictured in a 2012 photo in Colombo, Sri Lanka. (CNS/Reuters/Dinuka Liyanawatte)

"We stand against the continuing state repression and the large number of arrests. Police have arrested many social activists to satisfy the needs of politicians and by now they have begun to touch the clergy as well. That is a very serious matter," Gamage said.

"Several Buddhist monks were recently imprisoned on absurd charges but eventually the court released them. Even Fr. Cyril Gamini was prepared to be arrested in the same manner, but the police failed," he said.

Gamini is former director of the National Catholic Center for Social Communications and has been an outspoken critic of how government agencies handled the investigation of the Easter 2019 attacks — including two on Catholic churches — that killed 279 people in three cities.

Sonali, a teacher and principal for 30 years, is a member of the executive committee of the Catholic Teachers Union.

Gamage said many lawyers are ready to defend the nun. "We can no longer allow such repression. We are currently hearing that many activists have been arrested across the country," he said.

Amid protests across the country, protesters have occupied the entrance to the president's office in Colombo demanding President Gotabaya Rajapaksa's resignation.

As anger against the government spreads, police have fired tear gas and water cannons to contain protests. The crisis forced Mahinda Rajapaksa, the president's elder brother, to resign as prime minister in May.

CCLO member Thilina Alahakoon said he has hundreds of video clips and photos to show how women religious maintained peace during protests.

"Every time there was a conflict, the nuns intervened and settled the conflict," Alahakoon said. "The police have already gone after politicians and lost their professional dignity. I appeal to police officers not to abuse the law and keep the dignity of your uniform."

In a recent statement to parliament, he said it will be a difficult to obtain fuel and cooking gas throughout June and called on people to restrict travel.