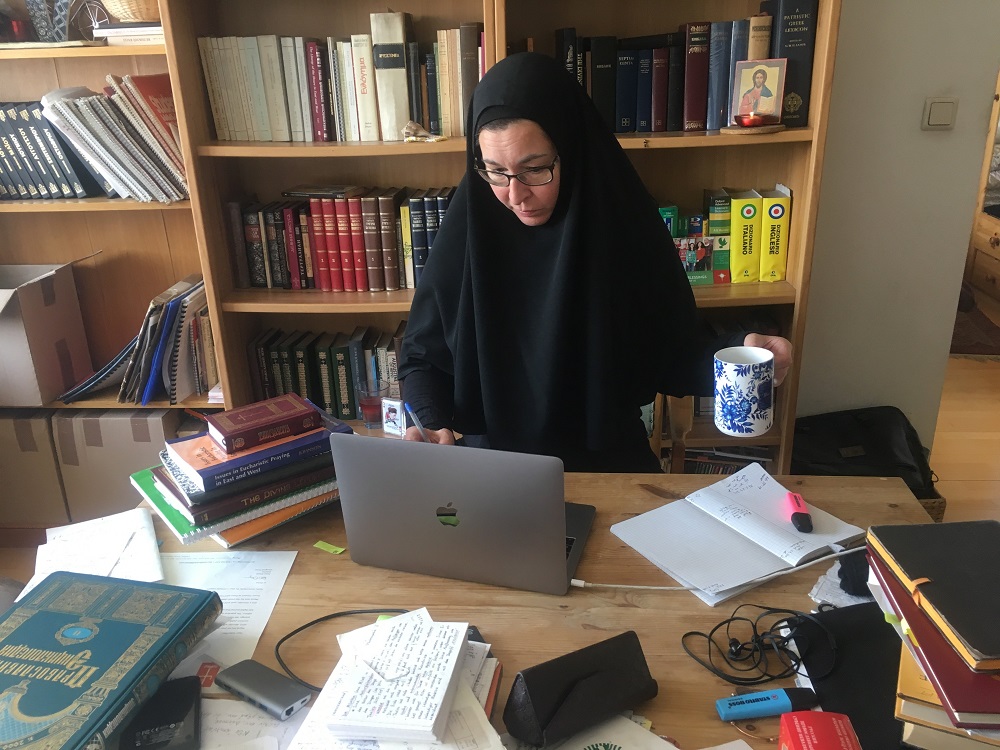 One of the Orthodox scholars who signed a statement condemning as "heresy" the political vision of Russian Orthodox Patriarch Kirill of Moscow is a U.S.-born Russian Orthodox nun and scholar of Byzantine liturgy.

Sr. Vassa Larin, a nun of the Russian Orthodox Church Outside Russia, also is host of the popular podcast and video series, "Coffee with Sister Vassa."

Living and working in Vienna, Larin also serves on the liturgical and canon law commissions of the Russian Orthodox Church, and now she is helping support a Ukrainian Catholic mother and her two children who fled Russian President Vladimir Putin's war on Ukraine.

In an interview with Catholic News Service on March 18, she denounced the war as "evil" and Patriarch Kirill's approach to it as a "horrible, horrible thing."

For decades, the patriarch has been promoting a teaching called "Russkii Mir" (Russian World), which claims a special status for the Russian Orthodox Church and the Russian nation working closely together to govern politically and spiritually not only Russia, but all Russian speakers and the people they believe are closely related to them: Ukrainians and Belarussians.

"It is not a Christian thing," Larin said, even if Patriarch Kirill and Putin try to cloak it in Christian language and present themselves as defenders of traditional Christian values.

"What unites us is not being Russian; that's not the primary thing in the mystery of the church," she said. "The church is a mystery of unity, a sacrament of unity, based on the oneness of the Body of Christ. It's not based on ethnicity."

"That was the big thing about Christianity, you know, that it expanded to all peoples, not just to one, chosen people of one blood-lineage," she said. "Christ was a light for the revelation to the Gentiles and indeed the glory of his people Israel, as in the song of Simeon."

In modern times, the Catholic Church has taken a self-critical look at its past cooperation and collaboration with temporal rulers and at the times it did not denounce the abuse of political power as it should have, she said. The Russian Orthodox Church has not made a similar examination of its past or present.

"We don't seem to find that instinct to witness and truth-tell when the going gets really rough," she said.

By accepting the government's "party line" and not questioning it in the light of the Gospel, Larin said, "we're really just dying on the battlefield of spiritual warfare."

While she describes herself as "a big Pope Francis fan," Larin said that as an Orthodox Christian, she does have some questions about his plan to consecrate Russia and Ukraine to the "Immaculate Heart of Mary" on March 25.

In addition, she said, the specific "sacredness" that is the "Immaculate Heart of Mary" is not one which Orthodox Christians — the majority of Christians in both Ukraine and Russia — would consecrate themselves to, because it is based on the Roman Catholic dogma of the Immaculate Conception, which is not accepted by the Orthodox Church.

Catholic doctrine asserts that Mary was conceived without the "stain" of original sin.

"We don't have an explicit teaching on original sin. We talk more about something like 'original corruption,'" which is the tendency of all human beings to sin as a consequence of Adam's original sin, she said.

But there is no sense in Orthodox teaching that people today, even the unbaptized, share any culpability for the original sin of Adam. So, Mary, like all other human beings, had no need to have been preserved from any original "sin" at her conception, Larin said. "She was, importantly for our church's teaching on the Incarnation, perfectly human; no less human in her nature than all other human beings."

In addition, although the Eastern- and Latin-rite Catholic bishops of Ukraine asked Pope Francis to consecrate their nation to Mary, Larin said she has spoken to Ukrainian Catholic refugees who do not like the idea of the pope consecrating both Ukraine and Russia to Mary at the same service, of being grouped together with Russia, at this point.

While it is true that all people are brothers and sisters and the pope may be wanting to highlight that, she said that many people think "it's maybe just a little too early for that," given the ferocity of Russia's attacks on Ukraine.

Orthodox and Catholics share a deep devotion to Mary, Larin said, and they know "we are under her protection. We have a special feast of the Protection of the Mother of God. She is not neglecting us. She is certainly not neglecting the people of Ukraine."