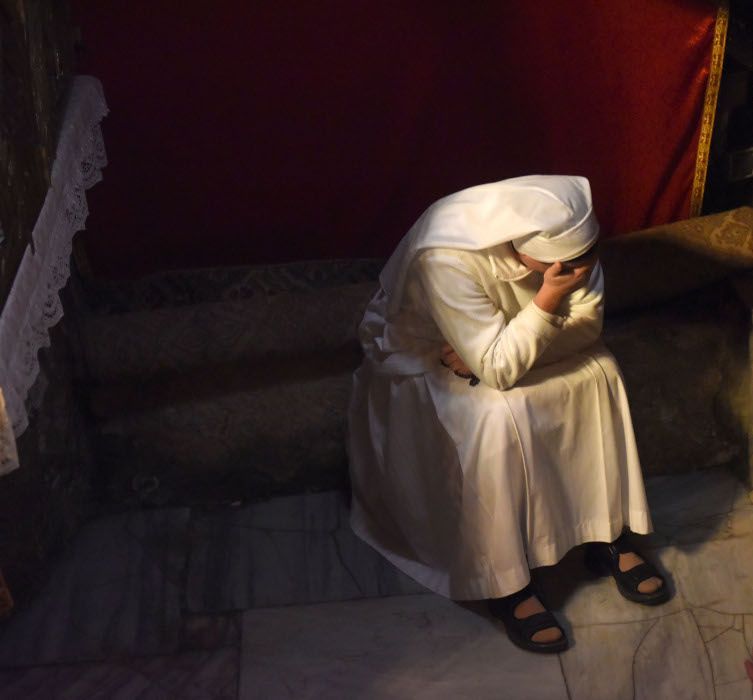 A nun is pictured in a file photo praying in the grotto of the Church of the Nativity in Bethlehem, West Bank. Novices and women religious, especially those who have been assigned to a country where they don't know the language, can be particularly vulnerable to abuses of power and conscience by superiors and sexual abuse by their formators, an article in La Civilta Cattolica said. (CNS/Debbie Hill)

Vatican City — The abuse occurring within women's religious orders deserves more attention from the media and must be remedied, said an influential Jesuit journal.

Novices and women religious, especially those who have been assigned to a country where they don't know the language, can be particularly vulnerable to abuses of power and conscience by superiors, and sexual abuse by their formators, said an article in "La Civilta Cattolica."

"The dynamics of women's religious life turn out to be very different from that of men in many ways. The education and many pastoral opportunities of those who receive Holy Orders allow men religious to live with greater openness and autonomy," even in a religious community, said the article, written by Jesuit Fr. Giovanni Cucci, a professor of psychology and philosophy at Rome's Pontifical Gregorian University.

The article, released to journalists July 30, was titled "Abuse of authority in the church: Problems and challenges of women's religious life." It cited different forms of abuse known by the author through his own work and from interviews given by Cardinal Joao Braz de Aviz, prefect of the Congregation for Institutes of Consecrated Life and Societies of Apostolic Life.

While much attention has been given to the abuse of minors and vulnerable people, and abuse perpetrated by priests, not enough has been said about the kinds of abuse women religious and novices have experienced within their own religious communities, the article said.

The Second Vatican Council called on religious orders to renew and revitalize their charisms and make needed reforms, it said. However, some orders failed in that task or they stuck with the old ways of doing things, particularly in their form of governance.

"Unfortunately, history teaches that without that effort of confronting (the issues) and seeking new pathways, the charism risks losing its vitality, triggering a slow, but unstoppable decline," it said.

Some dangers, it said, include when a superior general exploits the enthusiasm and trust of young novices, targeting women with "generous hearts, but also vulnerable to manipulation."

Sometimes unscrupulous leaders arbitrarily decide on who gets to continue their education, turning it into "a kind of prize given to the most loyal and compliant, excluding those who express thinking differently," it said.

An abusive leader may see her position as coming with "exclusive privileges," such as getting the best medical care, while the other members are not allowed to see an eye doctor or dentist because "we have to save money." 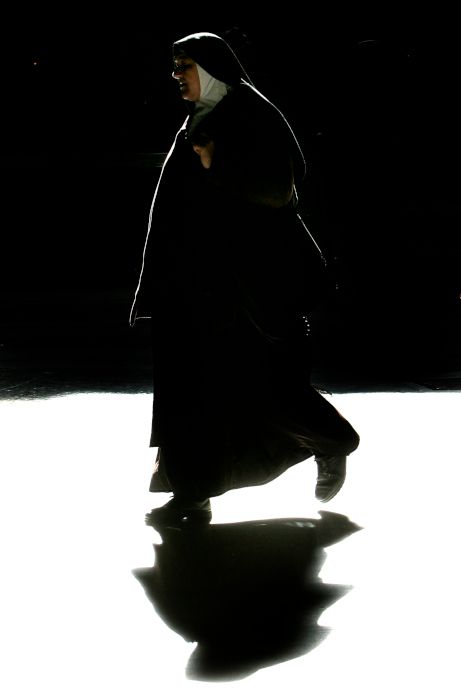 A nun is pictured silhouetted in a file photo in St. Peter's Basilica at the Vatican. (CNS/Reuters/Tony Gentile)

The same thing can happen when it comes to clothing, vacation time, a day off, even just going outside for a walk — these activities can be wielded as rare "privileges" that must be approved of according to the whims of the superior.

This kind of abusive leader, who might also be offering favors to family members or have inappropriate control and use of the institute's funds, "clearly equates governance with privilege, to the detriment of the weakest."

"What sort of notion of religious life do these cases convey?" Cucci asked. "These same institutes (with known abuse) haven't had any vocations in Italy for the past 50 years. Is that a coincidence?"

The article also reiterated criticisms going back decades against the practice of "importing" vocations from other countries, using young women as "fill-ins" instead of guaranteeing them the best formation possible.

Many of these young women who newly arrive from abroad are not able to stand up for themselves if they don't know the language and if they are never or rarely allowed outside of the religious house, which, rather than being seen as a community, feels like "a prison."

The article also quoted many instances already revealed by Cardinal Braz de Aviz in an interview published in the Vatican newspaper's monthly women's magazine in February, and it reiterated a number of problems and challenges addressed in the congregation's 2017 document, "New wine in new wineskins: Consecrated life and its ongoing challenges."

Abuse encompasses many different aspects and degrees of seriousness, the Civilta article, but all forms of abuse "call for being taken into consideration equally if one wants the voice of the church to stay credible."

On the contrary, highlighting the many different styles of governance, authority and life in women's religious orders can be a help in promoting those forms of consecrated life that are "most imbued with the new wine of the Gospel spirit."

And it is an important duty to give a voice and assistance to the many women who are hurting and have no support, it added.