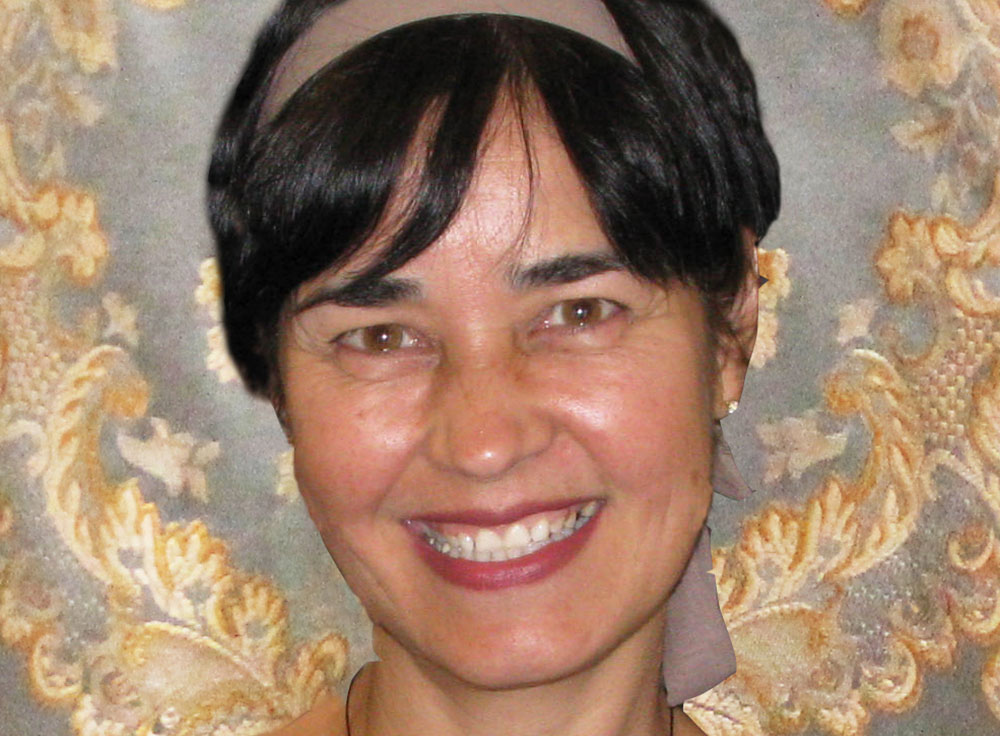 Sr. Dianna Ortiz, who not only survived kidnapping and torture but used the experience to become a voice for torture victims everywhere, died of cancer Feb. 19. She was 62.

An Ursuline Sister of Mount St. Joseph, Kentucky, Ortiz was working as a missionary in Guatemala in 1989 when she was kidnapped by Guatemalan security forces because of her work with Indigenous people. She was taken to a secret detention center in the capital and tortured for 24 hours until she was able to escape.

She returned to her family in the United States but was so traumatized, she had no memory of her life before the abduction and was unable to recall family members or her Ursuline sisters. She spent years pursuing justice, but no one was ever charged, and her memory never fully returned.

That pursuit of justice, however, gave her a voice first for herself, and then for all victims of torture. She spent the next decades working for justice and an end to torture in the world. In October, she survived COVID-19, but she never really recovered and was severely fatigued, said Johnny Zokovitch, executive director of Pax Christi USA, where Ortiz worked off and on beginning in 2010.

She assumed the symptoms were vestiges of the coronavirus, but they continued to worsen until three weeks ago, he said, when friends convinced her to go to the hospital, where she was diagnosed with cancer. When surgeons operated to remove a tumor, they discovered it had spread everywhere and was untreatable. They told her she had perhaps two months to live.

Zokovitch talked to her on the phone not long after, Feb. 13.

"There was such a note of acceptance in her voice. She talked about going home and seeing her late father again, who had meant so much to her," he said. "I was really taken by how deeply at peace she seemed to be in accepting that she was nearing the end."

Ortiz entered hospice care, and on Feb. 17, Zokovitch got a call saying she had taken a turn for the worse. He flew to Washington, D.C., where Ortiz lived, and reached her that evening, joining her mother and siblings.

"I spent an hour by her bedside, talking to her and stroking her hair and telling her how much she means to people and to me personally," Zokovitch said. "But by then, she was unresponsive."

"We will truly miss Sister Dianna's prayerful spirit and total dedication to helping others," Sr. Amelia Stenger, congregational leader of the Ursuline Sisters, said in a news release. "She suffered much during her life but continually tried to help others who were suffering. We pray for her, our community and her family."

Patricia Davis, who co-authored Ortiz's 2002 book recounting her experiences, The Blindfold's Eyes: My Journey From Torture to Truth, said Ortiz called her on Feb. 14 to say goodbye.

The two worked together for several years at the Guatemala Human Rights Commission and knew each other well, but helping Ortiz write the book left Davis with secondary trauma, she said. It also inspired her. 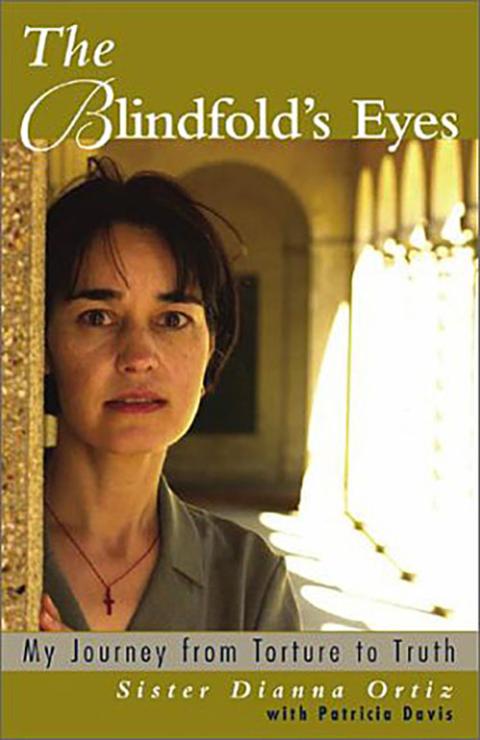 The cover of Ursuline Sr. Dianna Ortiz's book, "The Blindfold's Eyes" (Courtesy of the Ursuline Sisters of Mount St. Joseph)

"It was a journey both into her trauma and the horror she had been through, but also her strength and her faith," Davis said. "It was a piecing-together, not just of what happened, but of a worldview."

Davis said Ortiz in the early years of her religious life had a kind of naive faith, refusing to wear a seatbelt because Jesus would keep her safe.

"After [the torture], there's a complete shattering of faith and this slow process of healing through people that loved her," she said. "And then there's her coming to realize that healing is God."

But the trauma so deeply scarred Ortiz that she had to work to reconstruct her life before the event.

"To write the book, we had to interview people in her community and her friends and family to find out who she had been before," Davis said. "But I do think it was helpful for her."

Ursuline Sr. Michele Morek said many sisters at the motherhouse were hurt at first that Ortiz had no memory of them.

"But our community very wisely brought in a doctor who was used to dealing with trauma victims," Morek said. "He told us, 'You've got to realize the torturers hurt more than Dianna. They hurt your community, also. You're going to have to walk this road with her.' "

Morek said Ortiz had a strength beyond measure.

"She looked so fragile, I'd tease her," said Morek, who is Global Sisters Report's liaison to women religious and organizations in North America. "But it was like she had a steel rod in her spine." 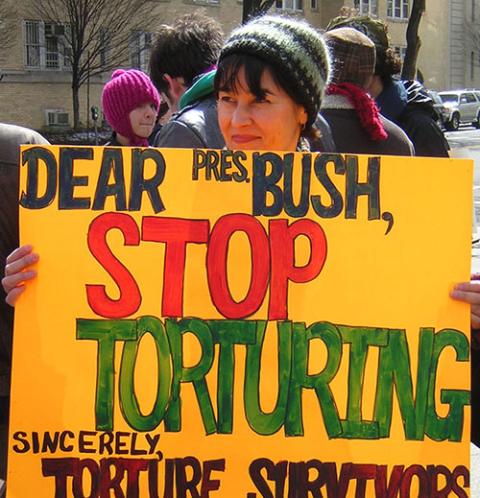 Ortiz was born Sept. 2, 1958, in Colorado but was raised in Grants, New Mexico, where she attended public schools until her senior year of high school, when she transferred to the Ursulines' Mount St. Joseph Academy. After graduation in 1977, she became a postulant and joined the community in 1978.

She taught at two Catholic schools in Kentucky before moving to Guatemala in 1987 to do mission work with Mayan children. By 1989, the Guatemalan civil war that had been raging for 29 years was marked by human rights atrocities and the slaughter of civilians, and Ortiz began to receive death threats. In November of that year, she was kidnapped and tortured.

Her search for justice was not only fruitless in Guatemala, but stonewalled in the United States by federal officials who didn't want criticism of their support for the Guatemalan government or exposure of their ties to its death squads. Ortiz wrote in her book that officials tried to discredit her, but the 111 cigarette burns on her back told a different story.

"All the cards were stacked against her," Davis said. "There was absolutely no way she could get justice in Guatemala."

In 1994, Ortiz became a grassroots organizer for the Guatemala Human Rights Commission, and in 1998, she founded the Torture Abolition and Survivors Support Coalition International to advocate for the abolition of torture and to support its victims. She joined the staff of Pax Christi USA in 2010 as interim director and then deputy director, then ministered with the Education for Justice project at Center of Concern from 2012 to 2018. She returned to Pax Christi USA as deputy director in March 2020. 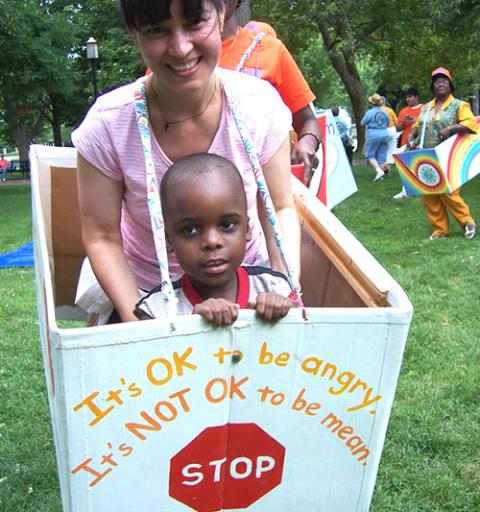 Ursuline Sr. Dianna Ortiz, founder of the Torture Abolition and Survivors Support Coalition, takes part in a "peace train" with the son of a torture survivor to promote nonviolent actions to achieve justice. The Ursuline Sisters gathered June 28, 2008, in Washington, D.C.'s Lafayette Park to take part in a 24-hour vigil to raise awareness of torture worldwide. (Courtesy of the Ursuline Sisters of Mount St. Joseph)

That experience, however, was inescapable.

Morek said it gives her comfort to know Ortiz is no longer suffering.

"We agonized over what she went through, and it still causes me great sadness to think that she suffered so much," she said. "But we all knew she would keep going, and she did. She hadn't given up."

Franciscan Fr. Joe Nangle, a member of the Assisi Community in Washington, D.C., where Ortiz lived, wrote on the Pax Christi USA website that on Feb. 14, he and Ortiz's good friend Marie Dennis went to celebrate the sacrament of anointing of the sick with her.

"Dianna received our anointing with attention and gratitude. She repeatedly spoke of conversations she was having with God, and her abiding conviction that He/She is Mercy itself and gave thanks for the numerous people who had graced her life," Nangle wrote. "Literally she ministered to Marie and to me, who had gone to be ministers for her. Personally, as a priest for many years and having been at the bedside of countless numbers of dying people, I never experienced what I did that Sunday morning. God for me was almost palpably present thanks to the spirit of this dear person who has now left us."

Dan Moriarty, who lived for a time at Assisi Community and was friends with Ortiz for years, wrote in a Facebook post that he knows Ortiz is now at peace.

"Dianna loved snow. As soon as the temperature dipped below 50 and the first fall cloud appeared in the sky, she anticipated it with childlike excitement," he wrote. "Today, as we woke to the news that she had passed, a beautiful, peaceful, quiet snow fell in big fluffy flakes and blanketed the ground. A hug and a wink on her way past the curtain."