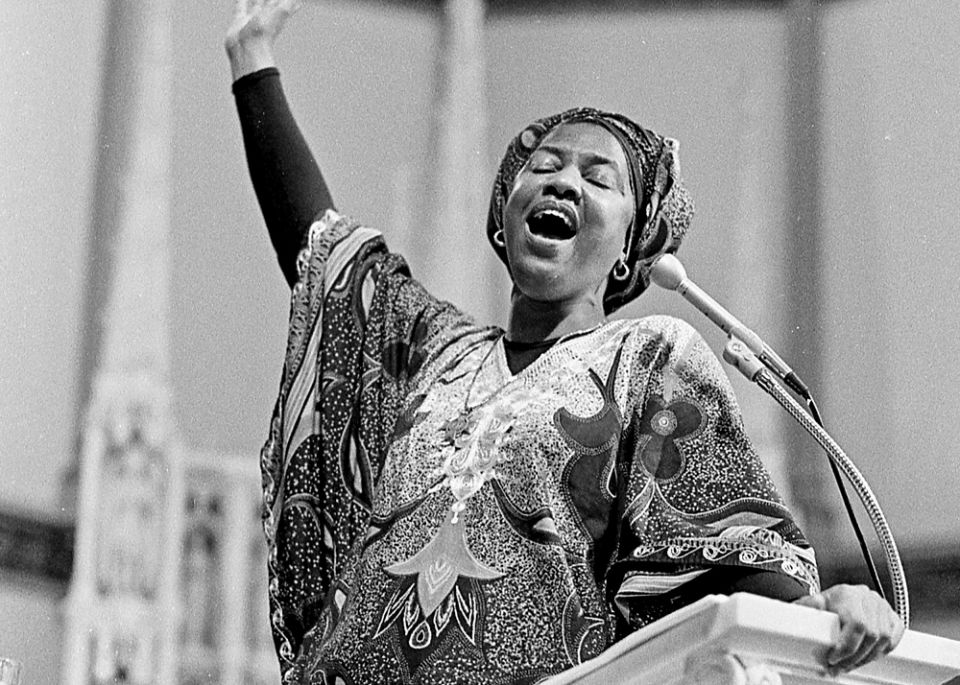 Sr. Thea Bowman, a Franciscan Sister of Perpetual Adoration, during a talk she gave at St. Augustine Church in Washington in 1986 (CNS/Catholic Standard/Michael Hoyt)

Washington — In the fall of 1979, Manuel Williams drove to a neighboring Alabama parish to hear a talk by Sr Thea Bowman, a dynamic Catholic speaker and evangelist known for her joyful singing and storytelling.

She also challenged the church to welcome the gifts of Black Catholics and celebrate their African heritage that had shaped their culture and faith.

Remembering the first time he saw the tall Black woman religious wearing an African dress, he said, "She strode on the stage as well as any Broadway actress or denizen of the performing arts would do. On top of her head, she had these meticulous braids you could almost describe as a crown. She was captivating."

Bowman, he remembered, had a style all her own. "She smiled. She taught. She told stories. She chastised. She affirmed. She cajoled, and she punctuated it all with a searing and a soaring [singing] voice."

And afterward, Bowman met him and encouraged him to become a priest, grabbing his hand and staring at him intently as she said, "Please do it. The church needs you. We need you."

More than 40 years later, now-Father Williams, ordained as a priest of the Congregation of the Resurrection in 1987, remembered the impact Bowman would have on his life.

"That October afternoon was the beginning of a personal, formational and a mentoring relationship that listed until Sister's death in 1990," he said.

A native of Mississippi, Bowman was a Franciscan Sister of Perpetual Adoration. Her sainthood cause was opened in 2018 and she has the title "Servant of God." She is one of six African American Catholics whose causes are under consideration by the Catholic Church.

Williams reflected on her life and legacy and her message for today in a Feb. 15 talk at the Catholic University of America titled, "The Wisdom of Sister Thea Bowman for a Church in Crisis."

The talk was sponsored by Catholic University's Center for Cultural Engagement, the university's campus ministry and by the Catholic ministry at Howard University in Washington, and the audience included students and staff members from both universities. 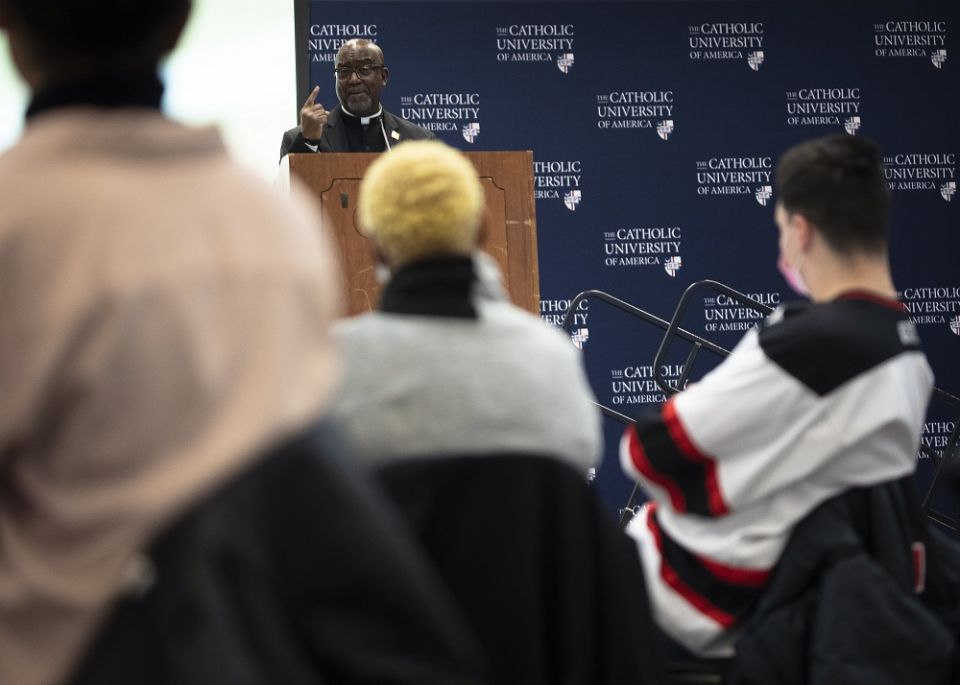 Fr. Manuel Williams, director of Resurrection Catholic Missions of the South and pastor of Resurrection Catholic Church in Montgomery, Alabama, speaks during a Feb. 15 luncheon at the Catholic University of America in Washington about the contemporary teachings of the late Sr. Thea Bowman, a Franciscan Sister of Perpetual Adoration from Canton, Mississippi. Bowman is a candidate for sainthood. (CNS/Tyler Orsburn)

In a way, the talk marked a homecoming for Bowman, who earned her master's degree and her doctorate degree in English from Catholic University.

In 2020, Catholic University formed the Sister Thea Bowman Committee to offer recommendations for promoting racial equality on the campus, and the committee's recommendations included focusing on recruiting and retaining diverse students, faculty and staff and offering more diverse academic programs and course content.

Fr. Robert Boxie III, a Washington archdiocesan priest and chaplain at Howard University, offered the opening prayer, praying that Bowman's words, example and ministry might help bring healing for the church, the country and the world.

The priest, like Williams, is a member of the guild promoting her canonization cause. "Sister Thea was known for her love of community and for bringing people together," he noted later.

When he addressed the gathering, Williams followed the example of his mentor Bowman, and interspersed his talk by singing the lines of some spirituals, in between making heartfelt pleas for justice and understanding as she had done in her life.

Williams began by singing the refrain from the hymn, "So Glad I'm Here in Jesus' Name."

The first time he heard Bowman speak, Williams said, he was struck by how her songs and words celebrated her African American heritage and her Catholic spiritual tradition.

Bowman taught at Catholic schools on the elementary, high school and college levels before becoming a nationally known evangelist and speaker. She had Williams in her classroom when as a seminarian he took her class on "Black Religion and the Arts" at the Institute for Black Catholic Studies at Xavier University of Louisiana in New Orleans. Xavier is the nation's only historically Black Catholic college.

"At this moment in our church and in our country's history, we need to hear the wisdom and the insights of Sister Thea, perhaps more than ever," he said. "Her words, her example, her call to family and holiness is deeply needed in the Church and even more desperately needed in the country."

Williams decried political leadership in recent years that he said has seemingly opened a Pandora's box of racism and other societal ills that people believed they had overcome decades ago, and for an example, he decried actions by state legislatures across the country that he said would limit the voting rights of people of color.

Bowman, he said, had worked to promote voting registration among minority communities.

If she were alive today, he said, she would support the Black Lives Matter movement and she would "very much be inspired" by Pope Francis, including by his emphasis on our responsibility to care for creation.

The priest expressed regret about how increasingly partisan political divisions also have seemed to impact how people of faith regard each other.

"What would she say to those of us in the church who sometimes are mimicking the partisanship and the distrust of each other based on political views?" he asked. Later he added, "Sister Thea would expect us to receive each other with love."

Williams, who also preaches revivals and missions throughout the United States, said he believes that Bowman would say that the church and this country today need "the gift of proximity."

"Thea believed in the gospel of encounter. ... She would say we need to get closer to each other. We need to encounter each other in real space and in real time and real situations" to build mutual understanding.

Addressing problems such as systematic racism is something that people of color cannot do alone, he said, noting that Bowman emphasized the importance of people collaborating and working together for justice in a community, "people who would walk with us and talk with us and pray with us … so we can make the Gospel real."

That work, he said, is not just for political leaders and the church hierarchy, but for people in their everyday lives who can make a difference even in a small way, and he told the story of how Sister Thea praised a priest who helped calm an unruly child, because the little boy saw "compassion in his eyes."

Underscoring how people of faith can live out the Gospel and advocate for justice within their spheres of influence, the priest sang part of the spiritual, "Walk Together Children."

"Sisters and brothers, let us all commit ourselves to that journey. Jesus is the way, and he is our destination," Williams said.

Amid suburban hubbub, cloistered Dominicans embrace the ‘silence of the eternal’