US cardinal gives nuns in Havana a host-making machine 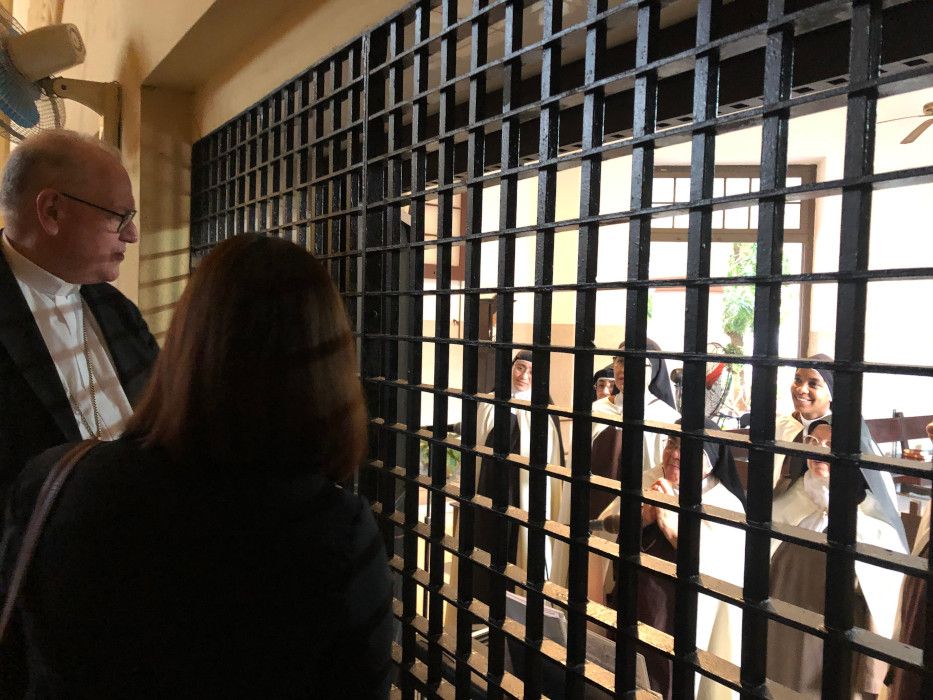 Cardinal Timothy M. Dolan of New York speaks with a group of cloistered Discalced Carmelites through a grill Feb. 12, 2020, at the monastery of St. Teresa and St. Joseph in Havana. A year after his visit, he gave the community a new machine to make hosts after they asked for help getting an old one fixed. (CNS/ Rhina Guidos)

San Salvador, El Salvador — In February 2020, New York Cardinal Timothy M. Dolan embarked on a trip to Cuba at the invitation of the island-nation's president, Miguel Díaz-Canel, causing a sensation in Havana.

But it was a group of cloistered nuns in the island's capital who captured the attention of Cuba's noted guest, the cardinal archbishop of New York.

"This is a highlight today," said Dolan, while making a video as he communicated with the group of Discalced Carmelites via an interpreter Feb. 12, 2020, through a grille, a metal divider that separates the nuns from the world outside.

Though the visit — hours before heading home after a weeklong trip — was brief, his affection for the sisters was visible then and he told them that if they needed anything, to let him know. He dropped off contact information after celebrating his last Mass on the island at the monastery of St. Teresa and St. Joseph.

The Discalced Carmelites took him up on his offer and later communicated with the cardinal to ask for urgent help fixing a machine they use to make the hosts. The old one had been donated by Dolan's predecessor, Cardinal John J. O'Connor, during one of his visits to Cuba, said Wanda Vasquez, director of the archdiocese's Hispanic ministry, in an interview published March 10 in Catholic New York, the archdiocesan newspaper.

The scarcity of materials on the island, in large part due to the U.S. embargo, limits parts to fix cars and other machinery so most people make do by simply picking apart whatever they can find.

But a machine to make hosts presents a particular problem because they aren't in abundance on the island. In fact, the Discalced Carmelites are the only ones who make the hosts for all the parishes in Cuba.

"So, the cardinal made the decision, as opposed to helping them fix the machine, getting them a new machine," Vasquez told Catholic New York. "He said he wanted to do it as a gift. ... He felt that he needed to help them to help the church in Cuba continue our eucharistic value ... to be able to create the host and be able to continue delivering them to all the parishes in Cuba."

It took a while. Because of the pandemic, Cuba has closed and opened and closed again to ward off the coronavirus on the island, but the machine finally arrived from a company in Spain in mid-February, almost exactly year after the cardinal's visit, said Vasquez.

The Discalced Carmelites' mother superior, Sr. Ana Mercedes de Jesús Crucificado, thanked the cardinal and the archdiocese for the gift.

"We have seen his heart of a pastor before a flock in need of the most important thing, the bread for the eucharistic celebration," she said, according to Catholic New York.

The cardinal during his 2020 visit told the sisters that he had confidence in the future of the church in Cuba because of their presence.

"To see these wonderful sisters, to know they are praying daily, giving their lives in silence and penance and prayers for the good of souls, the conversion of sinners, for the glory of God's name, for the love of Jesus and his church, what a great blessing that is," Dolan said. "So, hermanas [sisters], gracias. We love you in America."

News | US cardinal gives nuns in Havana a host-making machine