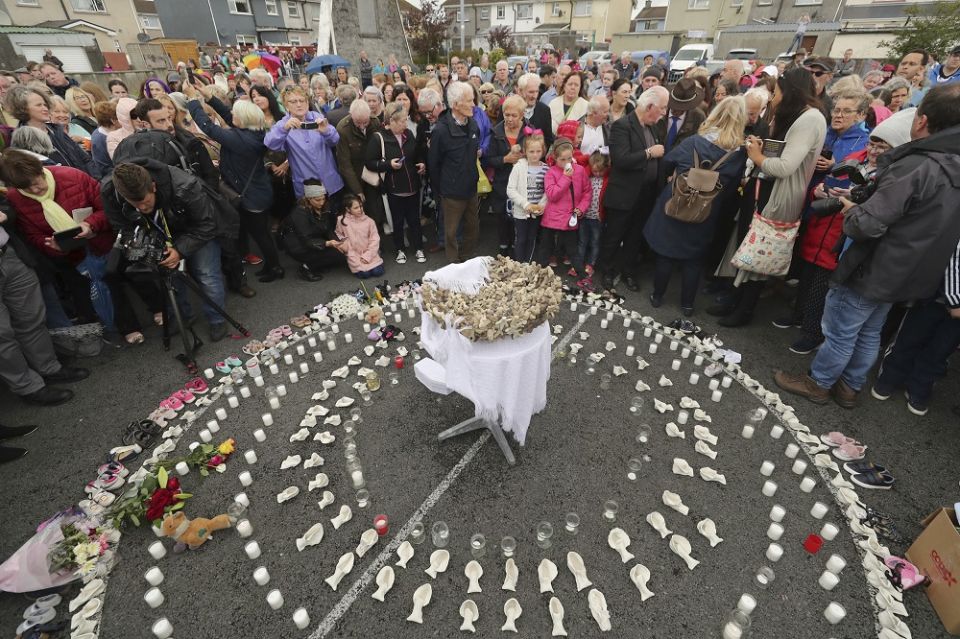 People gather Aug. 26, 2018, to protest at the site of the former Tuam home for unmarried mothers in County Galway, Ireland. (PA via AP/Niall Carson)

Vatican City — The Vatican has indicated its support for a campaign to provide a proper Christian burial for hundreds of babies and toddlers by first exhuming their bodies from the grounds of a Catholic-run Irish home for unwed mothers.

The Vatican's ambassador to Ireland, Archbishop Jude Thaddeus Okolo, said in a July 15 letter to the amateur Irish historian behind the campaign that he shared the views of the archbishop of Tuam, Ireland, Michael Neary.

Neary has said it was a "priority" for him to re-inter the babies' bodies in consecrated ground. If the Irish government refuses to authorize the exhumations, Neary promised to bless the ground where they were originally buried.

Historian Catherine Corless has been campaigning since 2014 to give the babies a dignified burial after she tracked down the death certificates for nearly 800 children who died at the home in the town of Tuam, north of Galway, but couldn't find corresponding burial records.

Excavations of the site in 2017 showed "significant quantities of human remains" in a 20-chamber underground structure near a decommissioned sewage tank. DNA analysis confirmed the ages of the dead children ranged from 35 weeks gestation to 3 years and were buried chiefly in the 1950s.

The Tuam home, which was run by the Sisters of Bon Secours order of Catholic nuns, closed in 1961.

Based on Corless' research, the Irish government instituted a commission of inquiry in 2015 into the Tuam facility and several other mother and baby homes where unwed mothers, orphans and children whose parents couldn't care for them were housed.

It was part of a process of reckoning in overwhelmingly Roman Catholic Ireland to come to terms with a history of abuses in Catholic-run institutions, including the shunning and shaming of unwed mothers, many of whom were pressured into giving up babies for adoption.

The commission is only looking into burial arrangements at the homes. It said in its most recent interim report more than a year ago that it still couldn't understand why the babies and young children buried outside the one in Tuam were handled in such an "inappropriate manner." The commission said local Galway authorities bore "particular responsibility" since they owned the home. 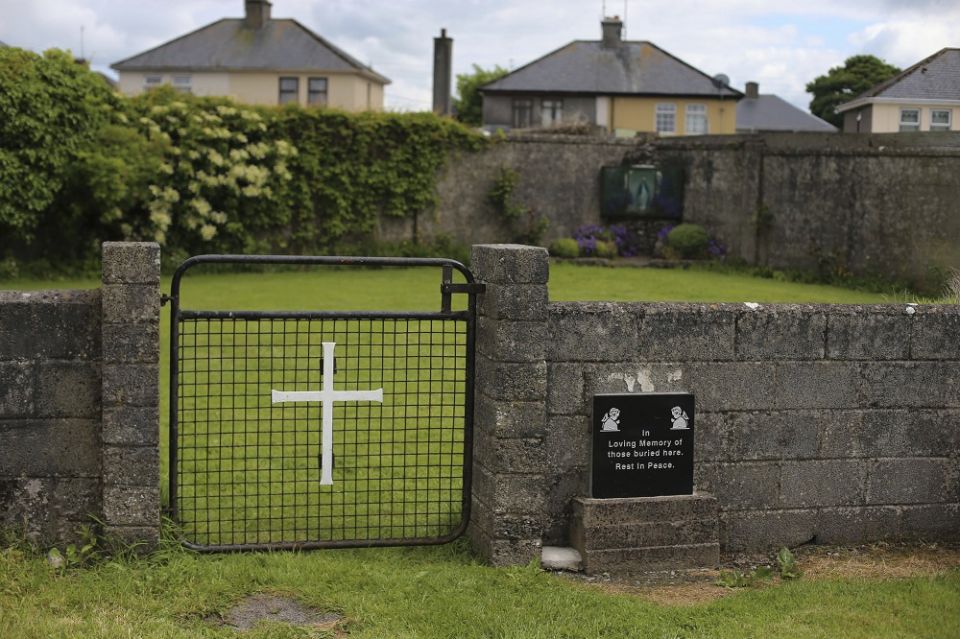 The site of a mass grave for children who died in the Tuam mother and baby home in Tuam, County Galway, Ireland, on June 4, 2014. (PA via AP/Niall Carson)

Seeking to nudge the government to finally honor the Tuam children and bring closure to their relatives, Corless wrote last month to the Vatican ambassador asking his views. She had been heartened by Pope Francis' horror when he learned about the Tuam burials during his 2018 visit to Ireland.

"My query to you is, as papal nuncio, do you think it proper in the name of Jesus to allow these little souls (they are all baptized) to be left in a sewage tank, or do you agree that they be exhumed and given a Christian burial?" Corless wrote Okolo on July 13.

Okolo noted in his reply letter two days later, which Corless provided to The Associated Press, that the final report of the government's commission of inquiry is pending.

But he quoted Neary, who previously said "it remains a priority for me, in cooperation with the families of the deceased, to seek to obtain a dignified re-internment of the remains of the children in consecrated grounds in Tuam."

Neary reaffirmed that position as recently as last month, but has also said that if the government chooses to leave the bodies where they are, he would bless the ground.

"I share his views," Okolo wrote Corless. "It is my conviction that through sincere love, a calm mind, clear-sightedness and mutual understanding, everyone concerned can cooperate to rectify the mistakes of the past."

Pope Francis himself has urged the church in Ireland to do whatever it can to make reparations for the Tuam burials, which he learned about firsthand from the country's then-minister for children, Katherine Zappone, with whom he met during his 2018 visit.

In a letter to the pope that she hand-delivered Aug. 27, 2018, Zappone said the Tuam babies were owed the "dignity and respect" that had been denied them in death, and noted the option of exhuming their remains and performing DNA tests on them. She urged the church to "contribute substantially" to whatever decision is taken by the government.

Francis was clearly moved by her appeal, and told Irish Jesuits later that day that he wanted the Irish church to "put an end to this."

"I don't mean simply turn the page, but seek out a cure, reparation, all that is necessary to heal the wounds and give life back to so many people," he told the priests.

Francis later wrote to Zappone assuring her of his concern and praying "in particular that efforts made by the government and by the local churches and religious congregations will help face responsibly this tragic chapter in Ireland's history."

While Zappone announced later in 2018 that the site would indeed be exhumed, the commission's final report has been delayed, Zappone is no longer minister and, to date, the burial site remains intact.

The Irish government has estimated that the cost of exhuming the site would cost between 6 million and 13 million euros; the Bon Secours Sisters have offered to pay 2.5 million euros, Irish news reports have said, quoting Zappone.

Halfway through 2022, catch up with Global Sisters Report