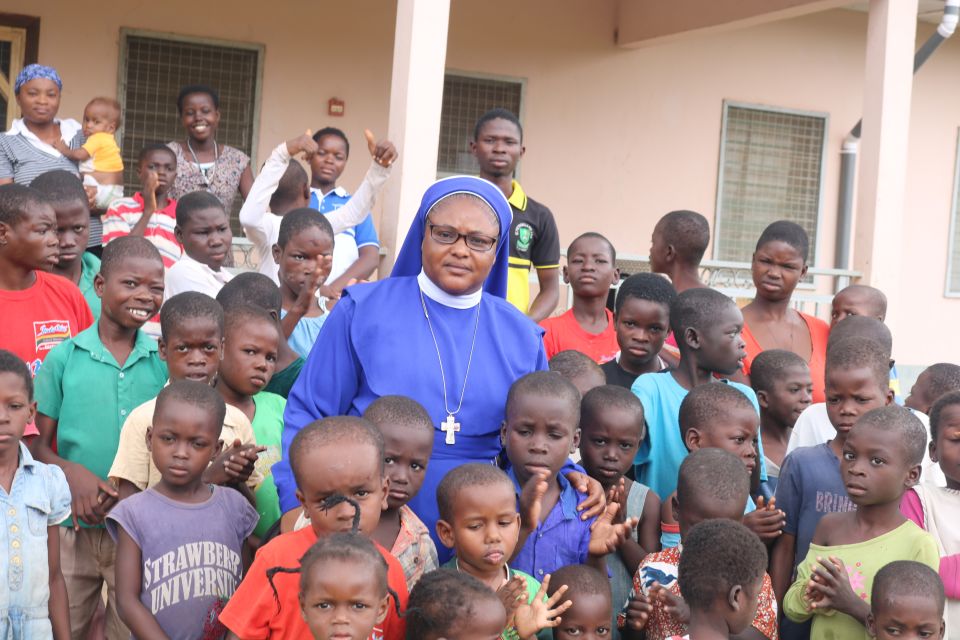 Sang, Ghana — In 2014, Sarah nearly lost her life when her neighbors in this remote village in the northeastern corner of Ghana accused her of being possessed by evil spirits and causing the death of 17 people — simply because she could not speak.

Although the government said the victims died due to a cholera outbreak and were among 243 deaths in Ghana, neighbors said that, since Sarah was disabled, she was responsible.

Sarah, now 12, was born mute and did not start speaking until she was 10. Sarah was suffering from autism spectrum disorder, a developmental disorder that impairs one's ability to communicate and interact. It can be a great burden for parents of affected children, especially in African countries where information about this condition is insufficient or hard to find.

In some parts of Ghana, children born with physical and mental disabilities, including hearing and visual impairment, are believed to be "spirit children" and are considered bad omens for the family and society at large.

These "spirit children" are blamed for deaths in the village, failed harvests, infertility, a mother's death during childbirth, family poverty, famine and poor performance of children in school. In some cases, babies born at the same time as a family misfortune are also accused of being "spirit children" and are killed.

"I was told that my own parents wanted to kill me because I had been born dumb," said Sarah as a stream of tears rolled down her face. "They tried to starve me to death, but God saved me. However, when the cholera outbreak killed people in our village, they blamed it on me, saying I possessed evil spirits."

When neighbors wanted to kill her, Sr. Stan Therese Mumuni came to her rescue and took her to the Nazareth Home for God's Children, which she founded to serve one of the most vulnerable populations in Ghana.

"They attacked me, but I was rescued by Sister Stan from our local church," said Sarah, who is now in fourth grade. "My parents rejected me. They called me a witch because I could not speak. I thank the church and Sister for saving my life."

Ghana has an estimated 2.8 million persons with mental disabilities, a tenth of its population. Of these, 650,000 people suffer from some type of acute mental disorder, according to the report by the World Health Organization. But the country has only three psychiatric hospitals.

Disability in the West African nation has a huge amount of stigma and discrimination in schools, health centers, work places, homes and in the villages. Along the streets of northern Ghana, signposts warn people with disabilities not to go near the businesses.

For decades, activists and government authorities in this country located along the Gulf of Guinea and the Atlantic Ocean have tried advocacy and education in an effort to end the practice but with only marginal success. Today, children born with a disability or deformity are still viewed as omens of impending doom and killed by "concoction men," witchdoctors who administer the poisonous, herbal drink that kills them instantly.

In 2009, Mumuni, a superior general of the Marian Sisters of Eucharistic Love, set out to document superstitions about disabled children in northern Ghana. She aimed to track down and expose some of those responsible for the senseless killings and stop the practice.

She founded a home where children who are born with birth defects and are under threat from their family members and community are given shelter, nutritious meals, health care and education, as well as unconditional love. 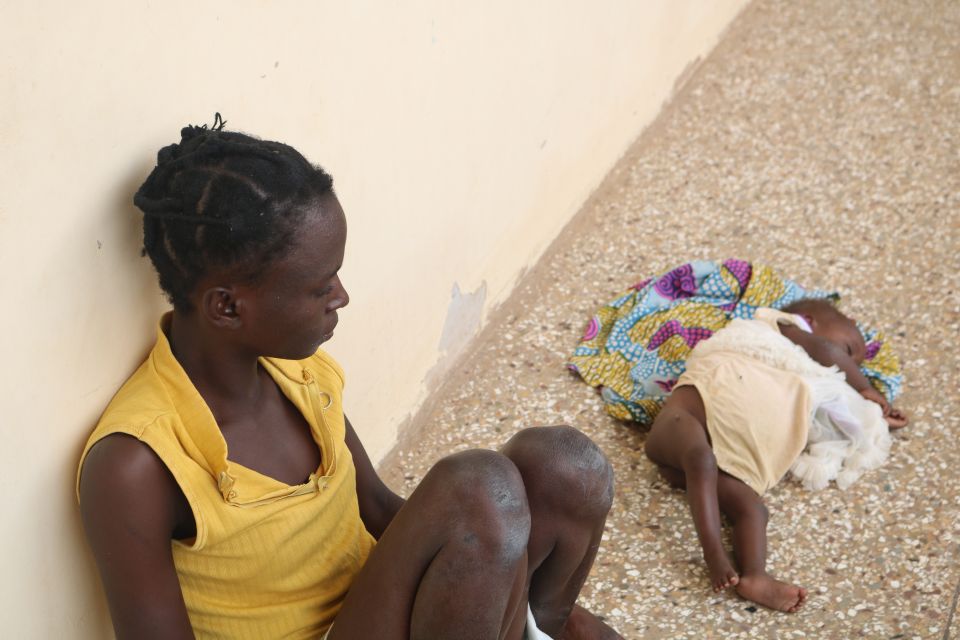 A girl, who is deaf and mute, looks after a sleeping toddler at the Nazareth Home for God's Children in northern Ghana. (Doreen Ajiambo)

"It wasn't easy. I rented a village house for five years, begging for food and medicine to help these children," said Mumuni, who was named a 2017 Opus Prize Finalist in support of her work to care for disabled orphans in Ghana. "As women religious, we are called to serve the people and we give ourselves to God for the service of persons who are poor. We give them unconditional love and show them that they still have another chance to live."

Sarah was among the first group of disabled children to be rescued by Mumuni from angry villagers when she was only 7. Sarah had no way of communicating with those around her except for a few imitative signs that she had invented for herself, said Mumuni. At the time, she did not know how to write.

Doctors from the United States who had visited the home taught Sarah to articulate her thoughts by reading lips and by relying on context, her knowledge of the native language and her residual hearing.

"I'm very happy because Sarah can now speak fluently and she attends school," said Mumuni, who grew up with three brothers and four sisters in northern Ghana. "Sarah was condemned by her own parents because she was born [mute]. I wonder why parents can call their own children 'spirit children' and they are the ones who gave birth to them." 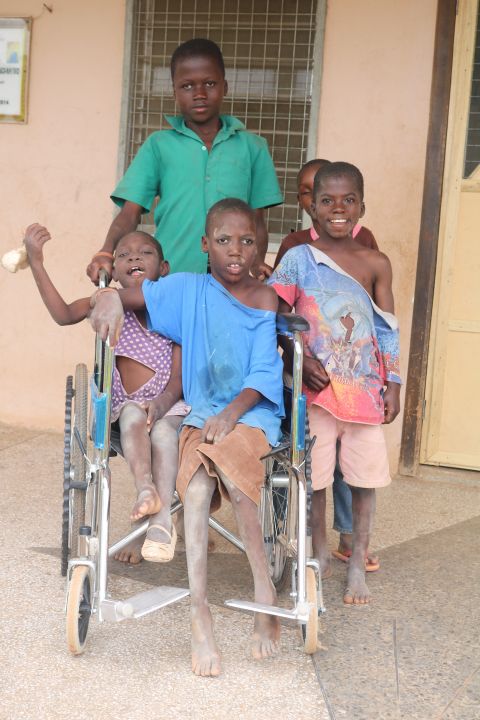 While there is no exact number of deaths as a result of these rituals across the country, Mumuni believes it could be in the thousands. She receives an average of five requests daily from people in her village to rescue children who have been banished, thrown on the street, fed poison or left to die.

Mumuni, who entered the convent in 1994, has been working with her congregation to raise awareness and end the tradition that has hurt so many of her ancestors. She visits villages weekly to talk to elders and local leaders about the need to change the perception they have about children born with disabilities.

She said some conditions result from a lack of medical attention. For example, women in rural areas give birth without ever visiting a prenatal care clinic or seeing a midwife. As a result, there are higher chances that the baby will have a birth defect.

"We are convincing people in the villages through education and awareness to accept these children and understand that they were created in God's image," said Mumuni, who has worked now as a missionary in West Africa for over 20 years. "Education will help them understand that physical disabilities have a medical explanation."

Commending Mumuni for her work, Bishop Vincent Sowah Boi-Nai told Global Sisters Report that the church had intensified public education to eliminate the negative perception that disability is a curse and an evil affliction.

"The sisters are doing a very good job and as a church we always support them fully," said the bishop of the Diocese of Yendi in northern Ghana. "We try to ask for donations as much as we can. We do community workshops to educate the community about these children." 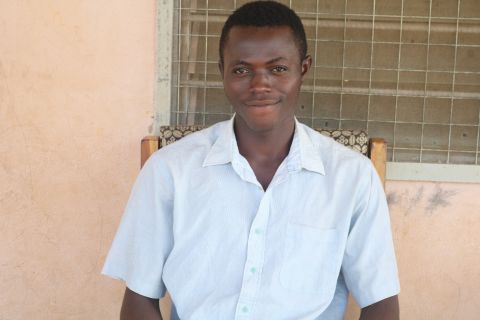 Samuel Abugri, 20, is looking forward to college after receiving his education while at the center with the help of Mumuni. He was brought there after his parents died and there was no one to take care of him. (Doreen Ajiambo)

Overall, the project has been a success. Mumuni has so far been able to save hundreds of children who would have been killed due to the traditional practice.

Some are in high schools while others are still waiting to go to college. Mumuni has been showcasing these healthy adults who are now contributing members of society.

Samuel Abugri is one of those who have succeeded under her care. He arrived at the home in 2009 after his parents died. The community blamed him and his sister, who were both deaf, for causing the deaths of their parents. Today, Abugri is waiting to apply for college after receiving hearing treatment from doctors.

"I feel very happy to be here," said Abugri, 20, who lives with his sister at the home. "I can now go to school and I also eat very well with the help of Sister Stan."

The church and local and international donors have helped Mumuni empower local women with small business loans so that they can support their families and have a chance to participate in decision-making in their villages, something that can help battle the "spirit children" phenomenon. She has also been training some of the now-adult children and the workers at her center to make cakes, bread and clothing to create income to support themselves and others in the future.

But more needs to done and urgently, she said.

"I have no money to help every 'spirit child.' We depend on donations and sometimes I literally beg from shop to shop on behalf of these children," said Mumuni, noting that she receives requests to accommodate more "spirit children" who have been left on the streets to die, but her home and resources are limited.

As for Sarah, she can't understand why her parents wanted to kill her and feels betrayed by their actions, vowing never to forgive them.

"I will never go back home to my parents. They wanted to kill me and I don't trust them anymore," she sobbed. "I want to stay here with Sister Stan and the other children."

'Baptized and sent' to the Cameroonian refugees in Nigeria