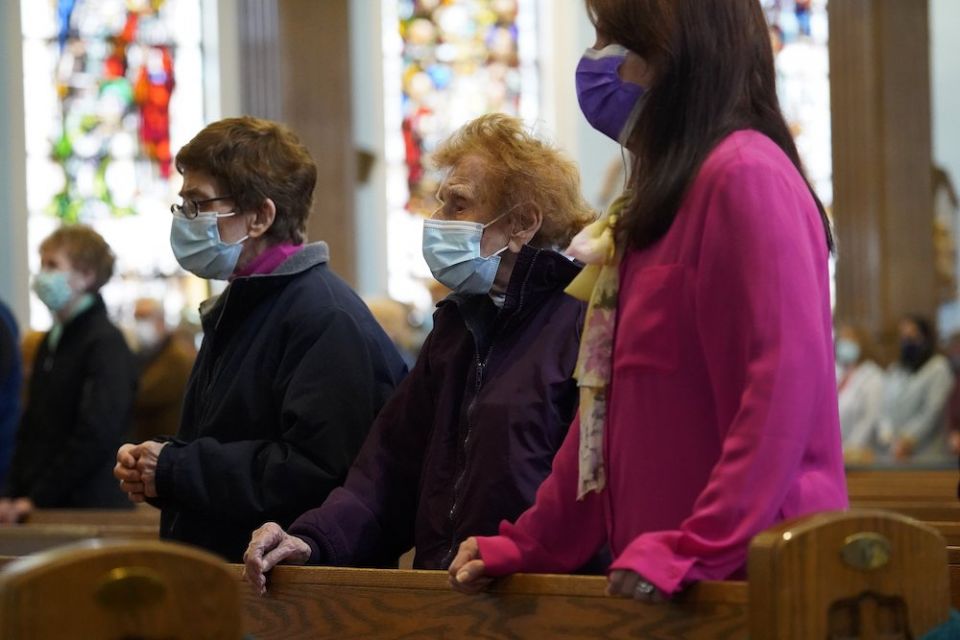 Sr. Francis Dominici Piscatella, center, a member of the Sisters of St. Dominic of Amityville, New York, is seen attending Mass at St. Aidan Church in Williston Park, New York, April 17, 2021. She is flanked by her friends, Amityville Dominican Sr. Francis Daniel Kammer, left, and Lillian DeMarco. According to searchable public data, Piscatella, who celebrated her 108th birthday April 20 is the second-oldest living religious sister in the U.S. (CNS/Gregory A. Shemitz)

East Williston, N.Y. — To put Sr. Francis Dominici Piscatella's extraordinarily long life into historical perspective, consider that Pope Pius X was pontiff and Woodrow Wilson was U.S. president when she was born in 1913.

Nine popes and 18 presidents later, Piscatella, a member of the Sisters of St. Dominic of Amityville, New York, is defying the aging process while living independently in a condominium apartment she shares with another religious sister at a Long Island village.

Data collected by the Gerontology Research Group, an organization that tracks centenarians globally, said Piscatella is the second-oldest woman religious in the United States. Only Sr. Vincent de Paul Hutton, a Dominican Sister of Peace, at 110, is older. She resides in a long-term care facility managed by her community in St. Catharine, Kentucky.

"I'm just living a normal life, thinking normally, reading and doing things an old lady would do," she said.

"Normal" isn't the word most observers would use to describe her. "Incredible" may be more accurate. 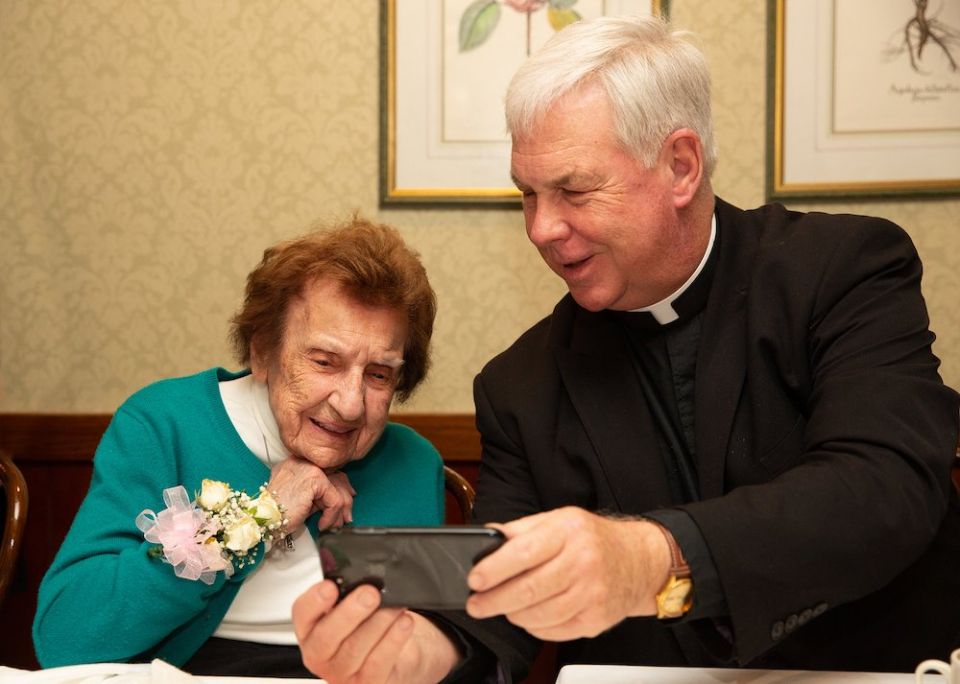 Sr. Francis Dominici Piscatella, a member of the Sisters of St. Dominic of Amityville, New York, is seen at her 105th birthday party with Msgr. Edward Ryan of the Brooklyn Diocese, in 2018. (CNS/Courtesy of the Piscatella family)

Her daily activities include praying, reading, solving word-search puzzles and watching the Catholic Faith Network and other television programming. Weather permitting, she attends daily Mass with Dominican Sr. Francis Daniel Kammer, 81, with whom she lives and who drives her to church and other appointments.

Remarkably, Piscatella manages to get around without the use of a wheelchair, walker or cane.

Born and raised in Central Islip, New York, she has proven to be strikingly resilient, having lived through two World Wars, the Great Depression, the Spanish flu and COVID-19 pandemics, among other challenges.

At age 2, Piscatella's left forearm was amputated after she sustained a serious hand injury. She later recovered from a car accident that resulted in a shattered right arm and bounced back from a near-fatal brain bleed suffered when she fell at age 102. She also has had hip-replacement surgery.

Piscatella, one of seven children of Italian immigrants Salvatore and Angela Piscatella, credited her mother for developing her drive to overcome personal obstacles.

"Nobody has ever had to help me," she said. "If anyone was helping somebody, it was I helping them.

"My mother made me completely independent. When I went to the convent, I had to prove to my superiors that there was nothing I couldn't do." 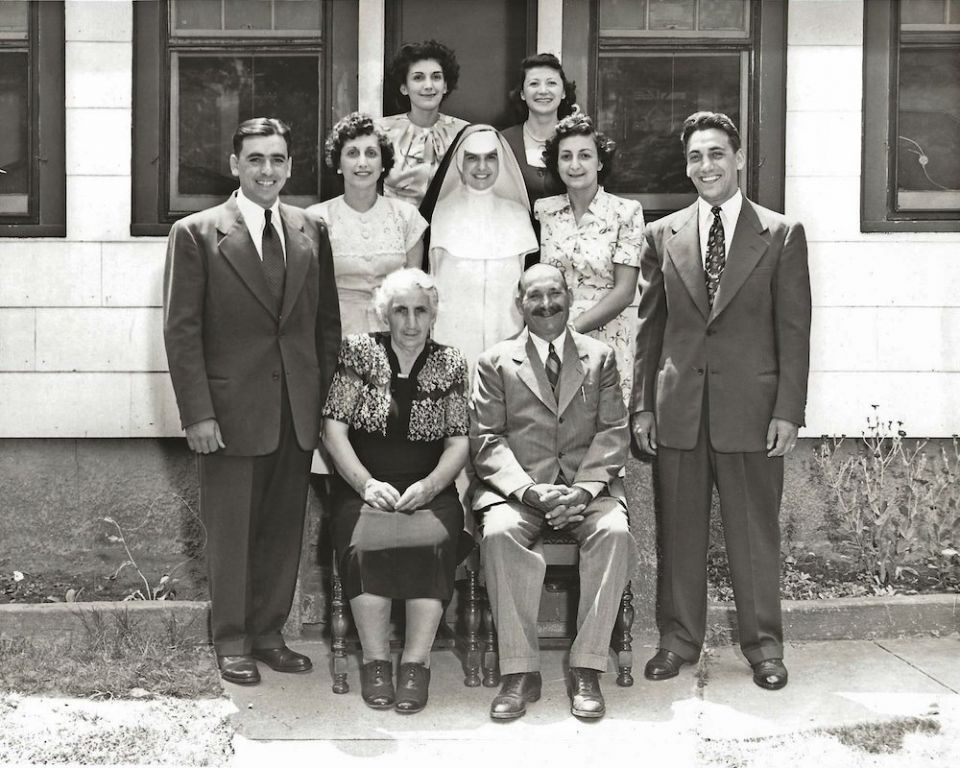 Sr. Francis Dominici Piscatella, a member of the Sisters of St. Dominic of Amityville, New York, is pictured with her parents, Angela and Salvatore, and siblings in an undated photo. The siblings are, left to right, Philip, Agnes, Margarite, Frances, Mary and Anthony. (CNS/Courtesy of the Piscatella family)

Piscatella joined the Dominicans in 1931 after other religious communities turned her away because of her physical disability. She responded to the call to serve the church as an educator, preparing for that career at St. John's University, where she earned bachelor's and master's degrees.

Possessing an aptitude and love for numbers, Piscatella excelled as a math teacher and tutor at several grade schools in the Diocese of Brooklyn, New York, and subsequently at Dominican Commercial High School in a neighborhood of the New York City borough of Queens, and Dominican-run Molloy College in Rockville Centre, New York, where she worked for 52 years before retiring at age 84.

Kammer was one of the thousands of students inspired by the beloved nun. She was taught by Piscatella at Dominican Commercial and later asked her to sponsor her when she applied to enter the order.

Following in Piscatella's footsteps, Kammer became a religious sister and a teacher, serving in elementary schools in the Brooklyn and Rockville Centre dioceses before reuniting with her as a fellow professor at Molloy. Between the two of them, Piscatella and Kammer have recorded 156 years of religious life.

Prayers and a positive attitude have helped the two women religious navigate life during the coronavirus pandemic.

They have found sanctuary in their home and leave the apartment only when necessary. Kammer drives Piscatella to doctors' appointments. They resumed going to Mass when their parish, St. Aidan Church in Williston Park, reopened for communal worship last spring. 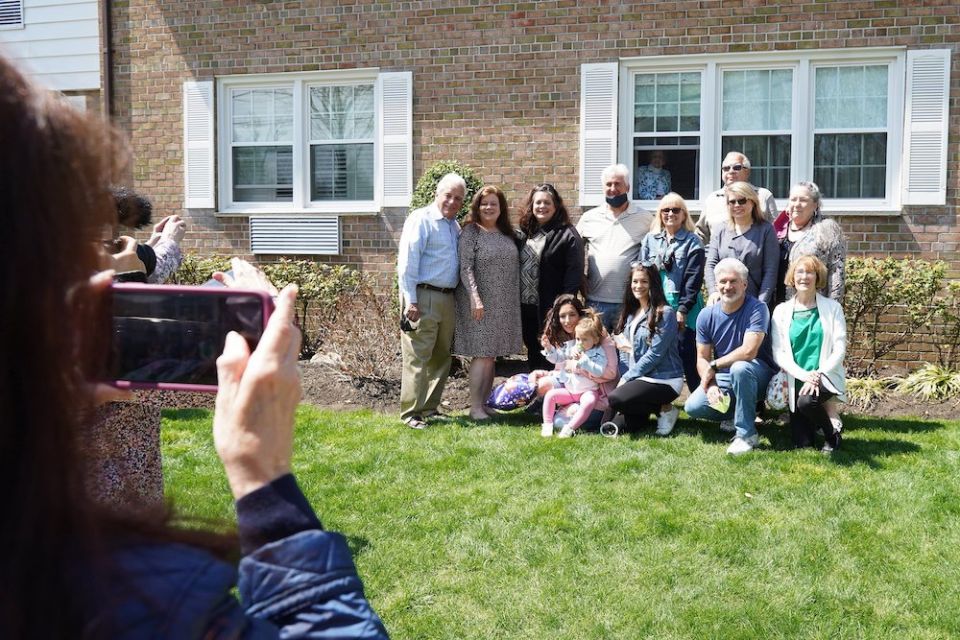 Dominican Sr. Francis Dominici Piscatella looks on as relatives gather for a photo outside the window of her East Williston, New York, apartment on her 108th birthday April 20, 2021. (CNS/Gregory A. Shemitz)

Kammer also will make occasional trips to the store for provisions to supplement the cooked meals relatives and friends deliver to them.

Cabin fever has not affected the two women. "We're never bored," Kammer said. "We do a lot of praying. We always find something to do."

Because of the pandemic, Piscatella's last two birthday celebrations were restricted to the lawn outside the front windows of the ground-floor apartment, where family members and other well-wishers gathered with balloons and signs and sang "Happy Birthday" to her.

Piscatella, who will achieve "supercentenarian" status when she turns 110, said she is "happy" with her life.

Her secret to longevity?

"I guess God doesn't want me yet," she said. "He just wants me to hang around." 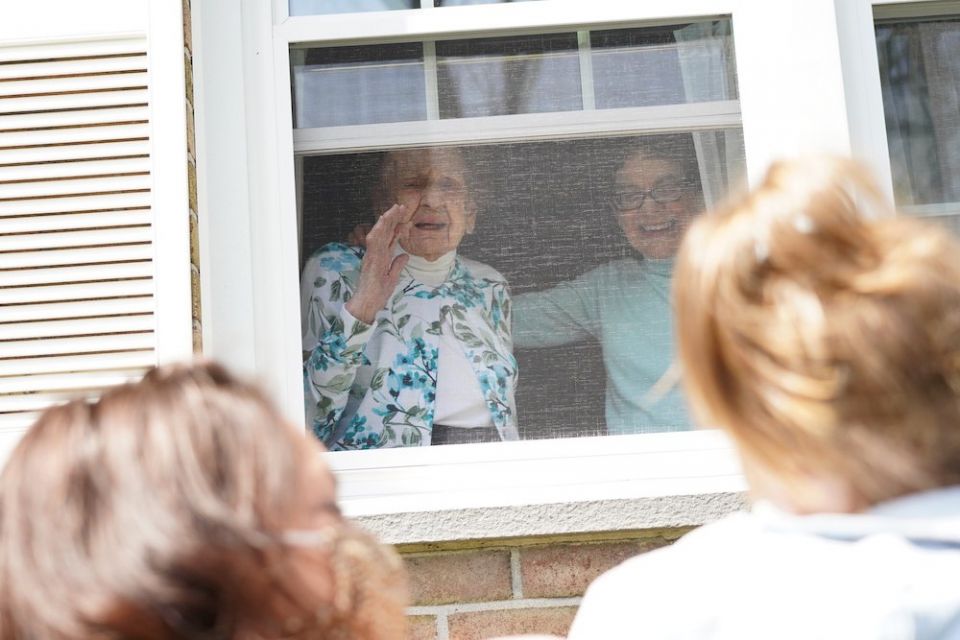 Sr. Francis Dominici Piscatella, left, waves as relatives and friends gather outside the window of her apartment to celebrate her 108th birthday April 20, 2021. With her is Sr. Francis Daniel Kammer. (CNS photo/Gregory A. Shemitz)

News | At 108, Dominican sister says God 'just wants me to hang around'