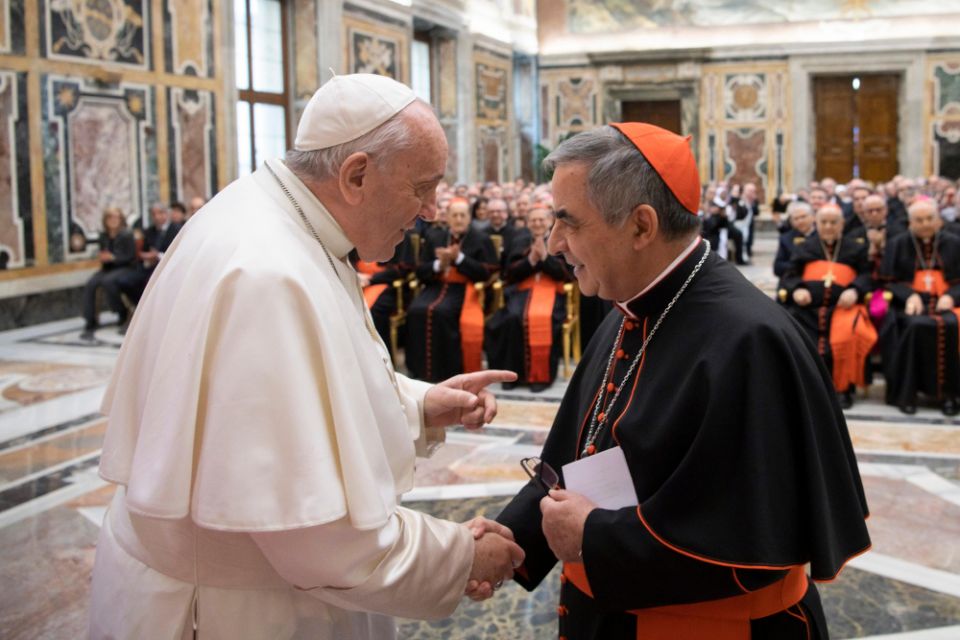 Pope Francis greets Cardinal Angelo Becciu, prefect of the Congregation for Saints' Causes, during an audience at the Vatican Dec. 12, 2019, to mark the 50th anniversary of the congregation's existence as an office focused solely on saints and the sainthood process. (CNS photo/Vatican Media)

Vatican City — Pope Francis has recognized the martyrdom of Sr. Agustina Rivas Lopez, a member of the Congregation of Our Lady of Charity of the Good Shepherd, who was killed by guerrillas in Peru in 1990.

In a meeting May 22 with Cardinal Marcello Semeraro, prefect of the Congregation for Saints' Causes, the pope advanced the sainthood causes of the Peruvian nun, as well as those of two other women and four men.

According to her congregation's website, Agustina, who was affectionately known as "Aguchita" by the indigenous people of La Florida, was the first religious woman murdered by the Shining Path, a militant wing of Peru's Communist Party that adhered to Maoist principles.

She was publicly executed in September 1990 along with six local villagers.

In a statement released May 22, the members of her religious congregation expressed their joy at the announcement and said they were awaiting the pope's approval of the date and place of Agustina's beatification ceremony.

"Pope Francis' promulgation of the beatification of our beloved sister Aguchita is without a doubt an extraordinary grace for all of us and for all the people of God," the congregation said.

The other decrees approved by Pope Francis recognized the heroic virtues of:

— Augustinian Fr. Mariano Gazpio Ezcurra, a Spanish missionary who served in China and in the Philippines. He was born in Spain in 1899 and died in his homeland in 1989.

— Italian Carmelite Sr. Anna Antonietta Mezzacapo, prioress of the Monastery of St. Teresa in Marcianise; she was born in 1914 and died in 1969.

— Italian laywoman Antonia Lesino, a member of the lay "Little Franciscan Family." She was born in Milan in 1897 and died in 1962.