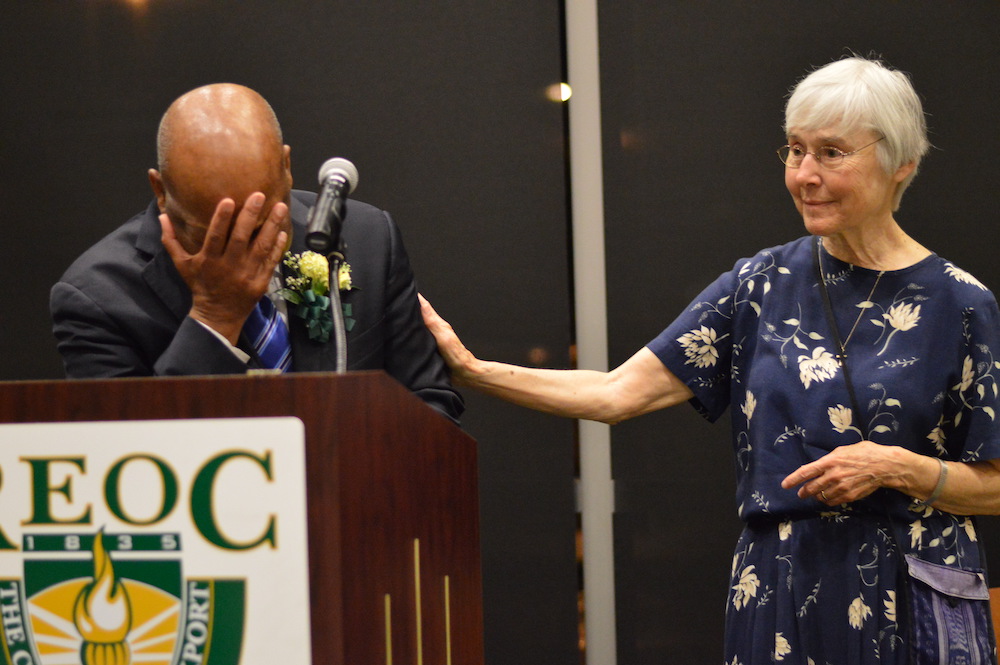 St. Joseph Sr. Barbara Lum, right, comforts U.S. Rep. John Lewis at the Rochester Education Opportunity Center's graduation ceremony May 13, 2014, as he speaks about the sisters who cared for him on Bloody Sunday in 1965. Lum was on the center's nursing faculty and invited Lewis to the graduation. (Courtesy of the Sisters of St. Joseph of Rochester)

Editor's note: Global Sisters Report is featuring interviews every other week with Catholic sisters and former sisters who worked and/or marched in Selma, Alabama, in 1965. They were featured in the 2007 PBS film "Sisters of Selma: Bearing Witness for Change" by Jayasri Hart, and we wanted to give them an opportunity to share their thoughts about current racial events, protests and Black Lives Matter. GSR invites any sister or former sister involved in Selma in 1965 to be part of this Q&A series. Email Carol Coburn at Carol.Coburn@avila.edu if you would like to be interviewed.

On the afternoon of March 7, 1965, the phone rang at St. Elizabeth's Convent in Selma, Alabama. St. Joseph Sr. Barbara Lum and other sisters were needed immediately at their hospital.

The Sisters of St. Joseph of Rochester, New York, started Good Samaritan Hospital in 1944 and served the Black population of the highly segregated city and nine nearby counties. The hospital closed in 1983, yet Catholic sisters from a variety of orders continue to provide health care in small rural clinics in Alabama.

On that Sunday afternoon in 1965, Alabama state troopers, many on horseback, attacked peaceful protestors marching for voting rights at the Edmund Pettus Bridge. Black people were not provided ambulance service in Selma, so Black funeral homes provided hearses to bear the wounded to the chaotic hospital scene. It would forever be known as "Bloody Sunday."

As she entered the hospital, Lum saw an unconscious young man on a stretcher waiting to be taken upstairs for treatment. She noticed he still had on his long white trench coat and that he was bleeding from a severe head laceration that was later diagnosed as a skull fracture. Another sister quickly identified him as John Lewis, a leader of the civil rights movement.

Lewis, who thought he was going to die of his head injury, credited the sisters with saving his life in Selma. He continued to have a relationship with the sisters until his death July 17.

"John Lewis, what a loss," Lum told Global Sisters Report. "Courage and goodness are the things that come to mind — all the wonderful things you could say about somebody."

Lum had come to the Selma hospital from Rochester in 1959, fresh out of nursing school, and immediately found herself in the Jim Crow world of segregation. 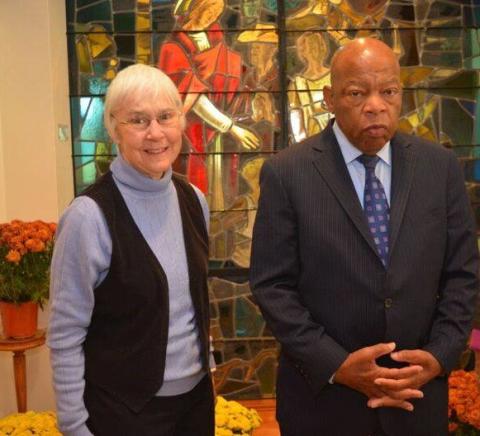 "In addition to water fountains and rest rooms labeled 'Colored' and 'White,' segregation affected neighborhoods, schools, restaurants, hotel, sidewalks, street lights (none), paved roads (none), indoor plumbing, hospitals, and lives," she wrote in a paper presented at the 2019 Conference on the History of Women Religious.

After nine years in Selma, she returned to Rochester for a master's degree in nursing and, later, nurse practitioner certification in women's health care. For 26 years, she worked and taught at the University of Rochester School of Nursing and Medical Center. She continued to do outreach work at a vocational center for women in poverty and a drop-in center begun by her community in a "troubled" neighborhood in Rochester.

Lum: Who would have thought 55 years later that such a movement would be necessary? The violence against people of color continues.

In 1960s Selma, we were told to call police when Black people were brought to the hospital, but I wouldn't always do that because people were very scared of the police, so often, I ignored the police protocol required of me. The sheriff was a violent, brutal man.

Today, it's the shock that we have all those rights in place and there's still that violent reaction of fear toward people of color. Current practices still show police brutality, and elected Black judges and lawyers have been arrested for "driving while Black" in Rochester.

It feels that the Black Lives Matter movement has brought things to a head and, hopefully, some change for the good. We can't go on judging people by the color of their skin. It has turned into a national and international movement now. I'm delighted by that. I'm more delighted than surprised that people realize these are our brothers and sisters made in the image of God.

What did you learn from the Selma experience that would be helpful today?

I think about the dignity and courage of people of color then and now. That fueled the successful march to Montgomery — people who, over many years, bit by bit, had to stay at it to bring about change.

People protesting today, even with past successes, still have to bring inequality to light. Opportunities for Blacks are still less, including work and education inequality. We are still blind to what Black people have to overcome to be successful. We have Black leaders in cities, and yet everything is not fair for people of color.

I think laws help, but people need to change their hearts. How that happens is that people need person-to-person encounters. I don't know how you make that happen until you know someone from another group and respect and care about them.

What would you say to young activists? What advice would you have for them?

I would say how I admire them and their courage and to continue and just keep on with the work. The work needs to be done, and the work is in their hands to do it.

I want to share an experience from Selma about another young Black activist, Jimmie Lee Jackson. This is a story probably unknown to many young Black Lives Matter activists.

In February 1965, I was one of the nurses caring for Jimmie Lee Jackson, who had been attacked by police during a peaceful voting rights march in a neighboring town. When state troopers attempted to break up the march, Jackson was brutally beaten and shot while trying to protect his family. Left unattended by police, he was later taken to Good Samaritan Hospital, where he died eight days later. The memory still haunts me 55 years later.

I made rounds every day, and he always took my hand and said the same thing each day: "Sister, don't you think this is a high price to pay for freedom?" I've never forgotten him, and I've never forgotten those words. Like George Floyd's death, Jackson's death was the catalyst for the Selma marches in 1965. 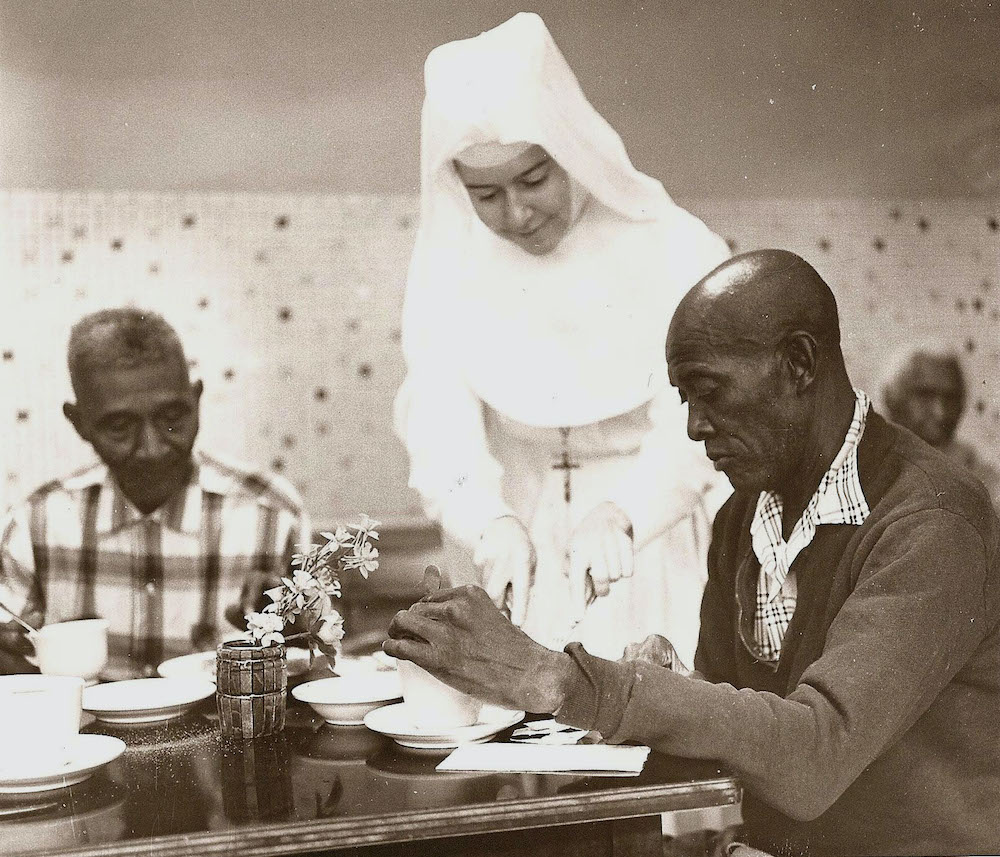 Are we at a tipping point? What would be your priorities for change?

I am so hopeful that yes, we are going to get real changes. Because of the universality of this movement and other forces, I feel the positive has a real chance to overcome the negative. Maybe I'm just a dreamer.

My priorities: Well, we need to take seriously the major tenet of every religion to love God and care for our neighbor. Also, education should be a priority. Our children cannot wait. Schools are in disarray with budget shortfalls. These consequences are falling on the children. We cannot lose a generation. I would put that at the top, but I can't neglect health care, either. Children who don't have health care and families that don't have health care — that is a crisis, as well.

What is the role of religious communities today?

I believe in collaboration with laypeople. I think we need to be present in every way we can. Prejudice is a disease. I think a lot of us are able to do work in conjunction with others. Sisters are not starting hospitals and schools anymore; we've changed our ministries. But we are a presence in many ways. Collaboration with laity is key. 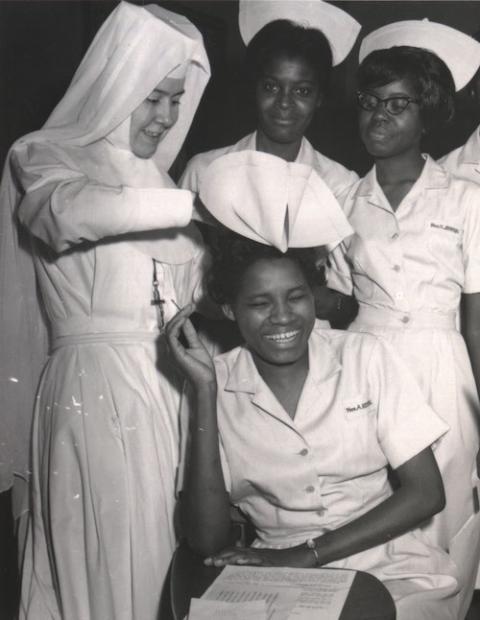 St. Joseph Sr. Barbara Lum, left, at a February 1965 capping ceremony in Selma, Alabama. (Courtesy of the Sisters of St. Joseph of Rochester)

I want to share my own experience about what I hope for in religious communities who work for justice. In Rochester, a local woman was struggling to give directions to someone looking for our community outreach center. Finally, unable to provide map directions, she told the inquirer, "You know, it's the place the girls go to feel safe." And the woman knew exactly where to go. That is what we intend for it to be: a peaceful place for all to make everyone feel safe and loved.

Other thoughts to share beyond what I have asked about?

Sisters are aging, but I see the opportunity for us, regardless of age or health, to minister to others. My community has 52 different ministries, and we work with a variety of ethnicities, ages, disabilities — an opportunity to shine a light of love to people who are right there. Sometimes it feels like a mini United Nations of diversity. I think it doesn't matter where we are if we can't be in institutions. We have that opportunity to share our ideals and values. We have opportunities to reach outside ourselves and follow the mandate of Jesus. It sounds so simple.

As I reflect on the violent death of Jimmie Lee Jackson in 1965 and on his profound and prophetic question to me — "Sister, isn't this a high price to pay for freedom?" — I realize that 55 years later, George Floyd, Ahmaud Arbery, Breonna Taylor and many, many others are still paying the price.

Related: Q & A with Sr. Barbara Lum
This story appears in the Sisters of Selma Q&A feature series. View the full series.