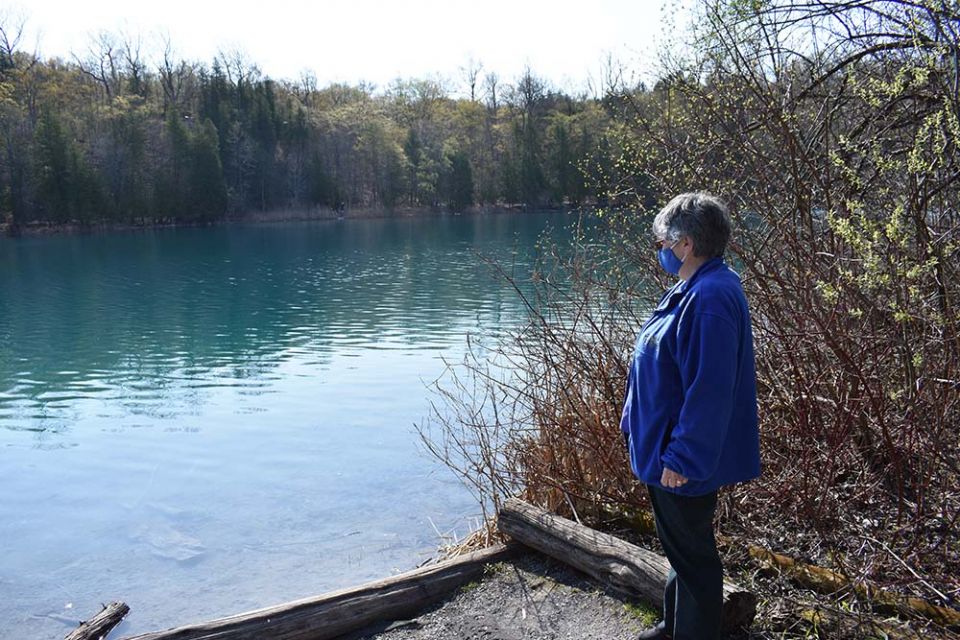 Sr. Caryn Crook, vocation director for the Sisters of St. Francis of the Neumann Communities, enjoys the view of Green Lake while members of the House of Discernment community visited Syracuse, New York, in late April. (Julie A. Ferraro)

My time at the House of Discernment sponsored by the Sisters of St. Francis of the Neumann Communities in Pittsburgh — roughly five months — came to a close in mid-June. While I'd planned on a peaceful, prayerful stretch of weeks as I searched for my next opportunity to be of service, God had other ideas.

On May 2, an early morning Facebook Messenger post rousted me out of bed — an experience that might not be too extraordinary for women in religious life who are also mothers/grandmothers. A family situation, brewing for months, warranted immediate attention. I was on a plane back to Washington state that evening.

Two weeks later, I returned to Pittsburgh, intent on resuming my course of discernment.

That course — thanks to what must've been a Holy Spirit-inspired find on the internet and the submission of my resume — has taken me to Atchison, Kansas, where I'm now working in communications for the Benedictine Sisters of Mount St. Scholastica.

Related: Settling in to discern with Franciscan Sisters in Pittsburgh

It's not only a chance to serve the sisters by sharing their message, but an opportunity to learn and grow, spiritually and intellectually. There's nothing I enjoy more than learning new things every day!

At the House of Discernment, I learned something I hadn't previously realized: Other women my age have entered religious life after being married and raising their children, and some still care for their progeny.

I heard of one such instance in April. The Franciscans were all praying for one sister who'd suffered serious injuries in an accident, being rear-ended by an 18-wheeler. This, while she'd been caring for her grandson and continuing her ministry.

That family comes first for these women should be no surprise. The religious communities who understand this — such as a number of Benedictine monasteries — are to be commended for a willingness to welcome women who may be widowed or divorced, middle-aged or older. The experience, insights and willingness to serve brought by such candidates enrich the community as a whole.

Not all communities permit older women to pursue a vocation to religious life. While working on another Global Sisters Report article, I interviewed vocation directors whose congregations have an age limit — usually between 40 and 50 — for those expressing a desire to discern. These sisters rationalized the limit with the belief that older women — who may not previously have lived in community or have been focused on their career or raising their family or both — would have difficulty adapting to daily life in community.

My reaction: Say what?

Having been divorced more than 20 years, I considered religious life off and on for about nine years while traveling the U.S. as a full-time volunteer, or in my employment with religious communities, as well as at the House of Discernment. The hitch: I never obtained an annulment when my legal divorce papers were approved by the courts. I knew I'd never marry again, so I didn't bother. Concentrating on raising my sons came first.

Most religious communities require an annulment before a woman will be considered as a candidate.

Processing all those documents now would be ... problematic and painful for me. 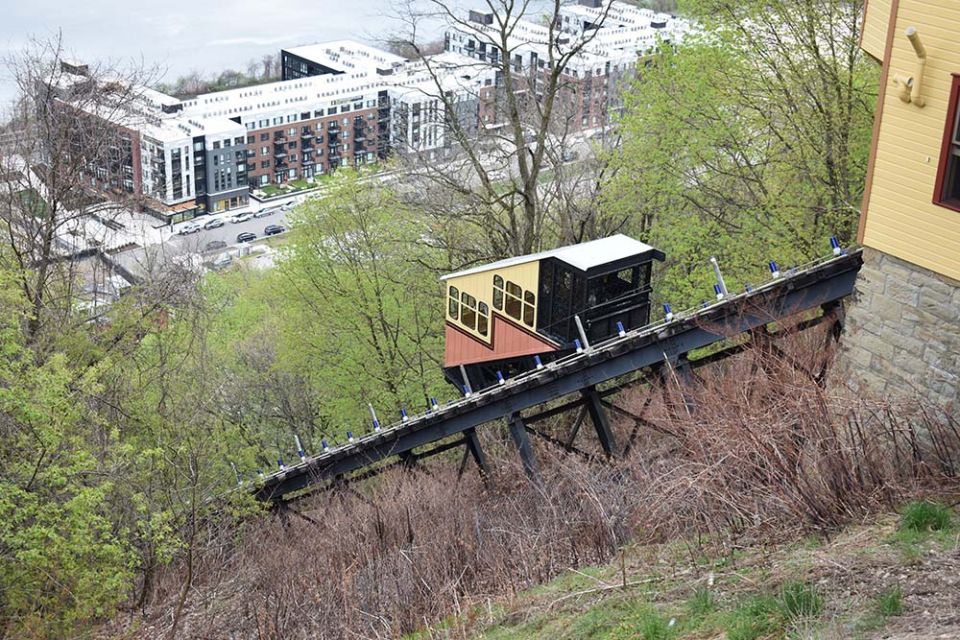 The House of Discernment community rode a small train that transports passengers up the Monongahela Incline in Pittsburgh, allowing for a view of the Pittsburgh skyline from Mount Washington. (Julie A. Ferraro)

There is another way, as was explained some years ago by a canon lawyer: a decree of separation obtained from the local diocese can, in some instances, become part of a dispensation process in which Rome makes an exception to the annulment requirement, so to speak.

Again, I bristle: Say what?

The hoops church hierarchy requires women (and men) to jump through are, in my book, excessive. Most of the brouhaha with an annulment seems to be linked to the vow of chastity, as a number of canon lawyers explained to me — but if an individual is no longer in a marital relationship, is she not being chaste and eligible to enter religious life without spending inordinate amounts of money and time to obtain a document that states a marriage did not exist?

The church cannot erase the results of a marriage — sometimes involving abuse and related trauma — so why is an annulment required?

Related: In formation to be a Benedictine oblate

There is evidence, from centuries past, that husbands and wives could — and did — separate from their marital bonds, each entering religious life by mutual agreement. The church did not protest such arrangements. But an older woman seeking entrance into a religious community these days often faces a host of obstacles.

Back when the life expectancy might have been 60 or 70, and health care far less advanced, allowing older candidates meant the religious community would use up more resources tending to the elderly, after fewer years of ministry had been offered.

Our life span is now longer, with healthier options well past the "retirement" age. I've spoken with sisters in their 90s who are still actively ministering in marvelous ways.

Religious communities might do well to rethink their age limits, especially with their numbers dwindling. Allowing older candidates would bridge the "age gap" currently plaguing many communities: Women in their 40s or 50s could better relate to the older sisters than some in their 20s or 30s. 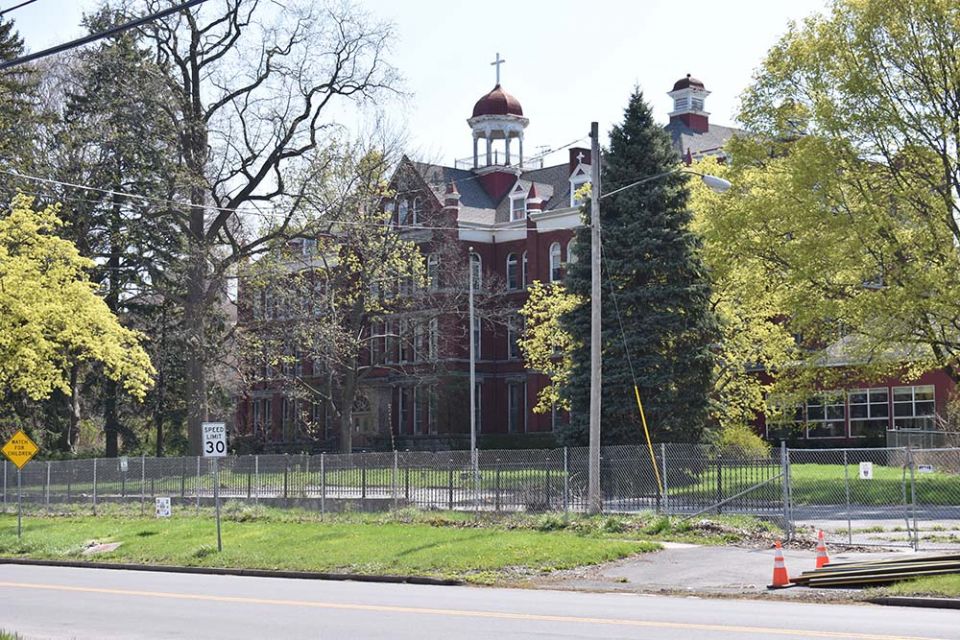 Older candidates also have better coping and decision-making skills. Just as I had to drop everything, pack my few belongings, then jump on a plane across the country, older women have the capacity to deal with life's unexpected challenges.

Another reason religious communities should permit older candidates to discern their vocation: The face of community itself has changed. Unlike the pre-Vatican II dynamic, where 20 or 30 or more women entered formation at the same time — as the vocation directors I interviewed told me — now it's one or two women joining on an infrequent basis. Community sizes are smaller — in some apostolic communities, perhaps three or four live in a house, more like a family unit — so the entire objection to older women not being able to adapt has become moot.

This type of small community is what I experienced at the House of Discernment. The dynamic nurtured a sense of intentional community when taking turns cooking dinner through the week, or gathering for morning and evening prayer. 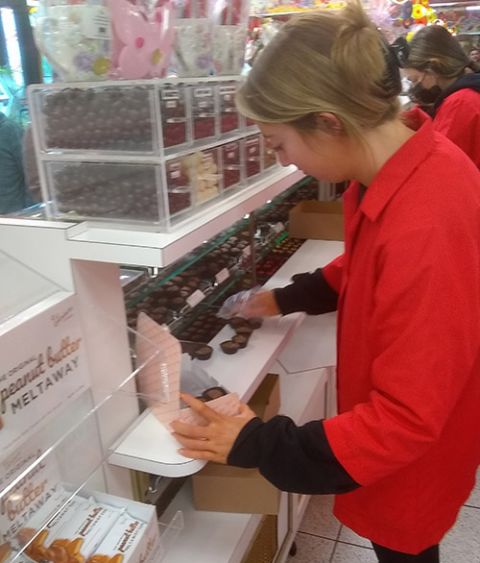 A clerk at Sarris Candies, Inc., Canonsburg, Pennsylvania, packs the author's order on May 30. (Julie A. Ferraro)

Reveling in being part of a small community, I will always remember traveling from Pittsburgh to visit other sisters in Syracuse, New York (after getting vaccinated against COVID-19) with Franciscan Sr. Caryn Crook and others, and buying some NunBetter chocolates made by the retired sisters. We rode a train up Mount Washington to view the Pittsburgh skyline (and found a bakery with delicious treats). Visiting the Sarris Candies chocolate factory in Canonsburg, Pennsylvania — a chocoholic's treasure! — was a treat. (You can see where my priorities focused on these excursions!)

We also went canoeing at Raccoon Creek State Park on Memorial Day and formed lasting bonds as stories were shared with laughter or, sometimes, tears.

To some, it might seem that such activities are no different than outings with close friends. Yet the community we formed extended beyond this, to a "book club" where we studied Fr. Anthony Gittins' Living Mission Interculturally via Zoom with other Franciscan sisters.

Having time for quiet prayer and meditation — and writing — seemed like a luxury to me after so many years of hectic activity where I hit the ground running each morning and collapsed, exhausted, into bed at night. The silence and peace made it possible for me to really listen to the divine voice, and discern where I could again be of service in support of women religious — even if the chance of me formally joining a religious community is ... quite slim.

For this particular older woman, I am grateful for the chance to discern with the Franciscans in Pittsburgh, and relish using my creativity and experience in my work with the Benedictines!

Julie A. Ferraro, a journalist for more than 30 years, is a Benedictine Oblate of the Monastery of the Ascension, Jerome, Idaho. She currently serves as social media manager for the Benedictine Sisters of Mount St. Scholastica, Atchison, Kansas.

Religious Life | From Franciscans in Pennsylvania, on to new adventure with Benedictines in Kansas

Establishing contemplative communities in the US: The early history

How often have I been a flower? Am I ready to be a gift?