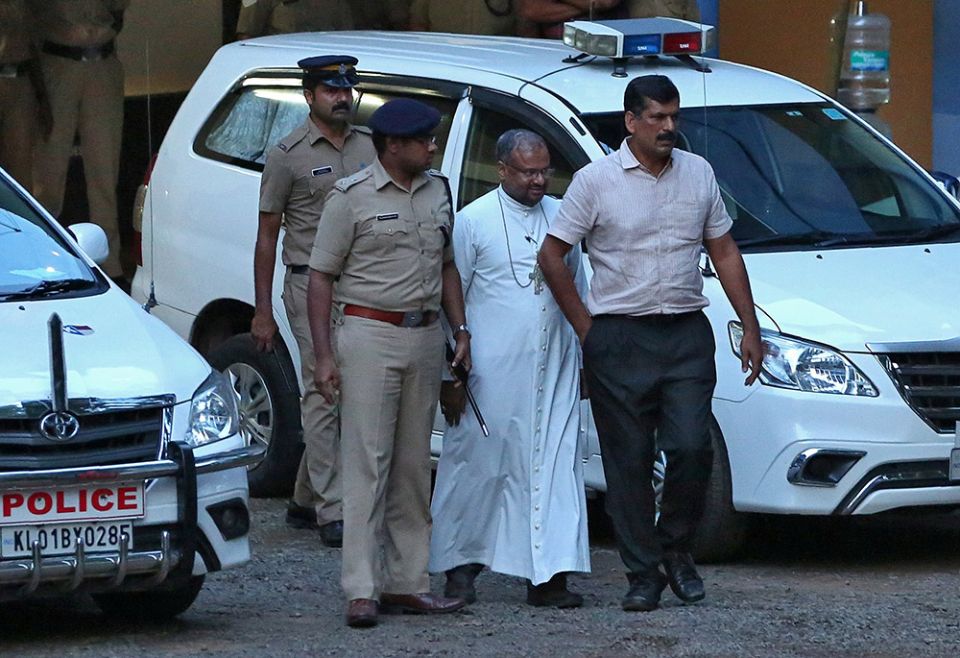 Bishop Franco Mulakkal is seen outside a crime branch office in Cochin, India, Sept. 19, 2018. On Jan. 14, a court in southern India's Kerala state acquitted him of all charges of raping a nun, saying the prosecution could not prove the allegations against him. (CNS/Reuters/Sivaram V)

MUMBAI, INDIA — The acquittal of Bishop Franco Mulakkal of Jalandhar in the rape case filed against him by the former superior general of the diocesan congregation Missionaries of Jesus in June 2018 has shocked — not just her supporters — but many feminists and other right-thinking people in the country.

Sisters in Solidarity, the group of women activists, nuns and lawyers who are accompanying the sisters, supporting them in different ways right through, are numbed with disbelief. On examining the judgment, it is clear that the bishop's highly paid defense counsel skillfully used technicalities to manipulate the facts and evidence to make the judge finally state in his order, "When it is not feasible to separate the truth from falsehood, when the grain and chaff are inextricably mixed up, the only available course is to discard the evidence in toto." He concluded, "This court was unable to place reliance on the solitary testimony of the PW1 [the survivor nun] and to hold the accused guilty of the offences charged against him."

The bishop was charged with wrongful confinement, rape, unnatural sex and criminal intimidation stemming from an alleged 13 incidents on his visits to the convent guesthouse from 2014 into 2016, making him the first Catholic bishop in India to be charged and tried in the rape of a nun. The verdict was given Jan. 14 by a Sessions Court in the district of Kottayam in the southwestern Indian state of Kerala, the jurisdiction nearest the scene of the alleged crimes.

Related: Bishop Franco Mulakkal acquitted in alleged rapes of a nun in India

Mulakkal came out of the court jubilant, and said, "Praise God!" Which God would accept his praise? I believe that there were people dancing with joy, shouting that the church has won. Again, which church? Considering that the survivor nun is from the same religious tradition, do they think that God favors the man over the woman? Or that God endorses misogyny and violence to women to bless the accused with an acquittal?

Kerala being a state with a significant Catholic population, where the Catholic Church holds sway because of its social influence and political clout, it wields considerable power. It is not surprising that the powers that be have prevailed. Patriarchy and misogyny have won.

What is shocking is the reason for the acquittal. A senior police officer, who headed the investigation into the case when it was filed in 2018, said he was shocked at the verdict, because he had built a watertight case against the accused.

On a TV talk show, the former chairperson of the National Commission for Women in India pointed out that the judgment is not based on the letter and spirit of the law.

Women are deeply dismayed because such a judgment is a deterrent to any other nun to come forward and report rape. One nun said to me, "Now, women will be careful not to come forward if they do not have strong evidence or they will be further humiliated if they report rape." Besides that, a man's access to the power of money is far greater than that of a woman.

In the Catholic Church the clergy are trusted blindly and looked up to as representatives of God. So, when a priest — and more so a bishop — suddenly foists himself on a woman, she is taken by surprise that makes her mind go blank. She does not know how to process what is happening, her mind is racing and she is also filled with fear. Having been socialized to believe that women are temptresses, she wonders if she has done something to attract the abuse.

Take the case of this relatively young nun, who joined the convent from her hometown in Kerala. She traveled to Jalandhar, almost 2,000 miles away in north India, at the age of 15, encouraged by a priest from that diocese who came scouting for "vocations." Women in Kerala are brought up in a very protected way with no knowledge of or exposure to anything related to sex. She believes that she is going to be absolutely safe in the convent, protected by her vow of chastity.

The power differential between a nun and her bishop is also a big factor that contributes to her confusion in processing her experience. Is it possible for such a naive woman to rush out and talk about her experience? Much less report it? Can the time factor to respond even be a consideration?

The bishop used his position of power and authority over her to get her into situations that made it easy for him to rape her repeatedly. This left her in deep mental distress, until she turned to a priest who gave her the courage to speak up about it. This lapse in time between the rape and her reporting was used against her, leaving her devastated. Rape is not just about the law running its course, but the mental state of the survivor. Only the woman can know and understand how that feels. 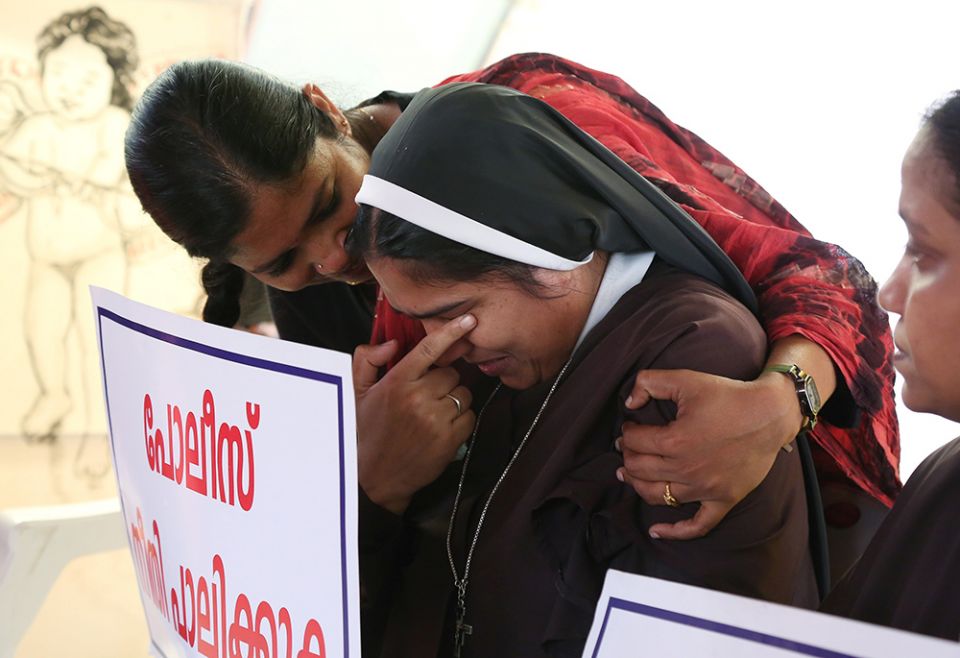 The survivor nun had written letters to all bishops in authority over the jurisdiction of Jalandhar Diocese, i.e. the Delhi metropolitan bishop, the Catholic Bishops' Conference of India president, as well as the apostolic nuncio in India, and got no response. She spoke to the parish priest and bishop in Kerala, where her convent was situated, but found no support.

Her situation is not unlike a majority of women in India. Hence the feminists have fought hard to change the laws concerning rape. Under these stringent laws there was enough scope for Mulakkal to be charged, but his shrewd counsel managed to argue why the law could not hold in this case. He was standing against a rather inexperienced public prosecutor who was appointed by the state to defend the nun. Where did the bishop get the money to pay the exorbitantly high fees charged by such expert lawyers?

In the church, where does a woman turn when the leadership is all male, men who protect each other and stand by each other to defend the crimes of their brother priests? The way the church leadership treated this survivor made the surrounding Catholic community turn hostile towards her, her companion supporters and even their families.

Even more dismal is the fact that the Catholic Church does not have any mechanism or structure to handle complaints of abuse of women within the institution. This is despite the law for the Prevention of Sexual Harassment in the Workplace in the country that makes it mandatory for every institution to have an Internal Complaints Committee to handle reports of sexual harassment of women in the workplace. The church is deemed to be the workplace of nuns.

In 1991, the Catholic Bishops' Conference of India set up a Desk for Women for the empowerment of women in the country both within and beyond the church. It was upgraded to an independent commission to give it greater autonomy. I was the executive secretary of the commission from 1998 to 2004. During my tenure, I tried to put in place guidelines for the operation of the commission but met with resistance from the bishops who kept stalling me.

A religious sister, appointed in my place, obediently followed the instructions of the bishops. During her term the bishops, in consultation with a group of women, brought out the celebrated Gender Policy that remains a stillborn instrument. No mechanism was created for its implementation nor was there any periodic evaluation of its implementation. So, the Gender Policy notwithstanding, women have no redressal mechanism for abuse in the church.

Related: Timeline in the first case of a Catholic bishop in India charged in the rape of a nun

From 2010 onward, a group of women mainly from the Bombay Archdiocese have been taking up cases of abuse in the church. Only one case with multiple accusations was investigated but the conclusions were never implemented. Other cases were never investigated and victims were silenced. In one case involving a diocese of north India, the nun left the congregation in frustration because she did not receive support either from her congregation nor the bishop of the diocese. The seminarian, who she accused of voyeurism, was never censured. Instead, he was rewarded by being sent to Rome for higher studies. What is the message for his future mission in the church?

Some people say that enforced celibacy is the cause for abuse, as it is unnatural but maintained for economic reasons, hence the church feels obliged to defend the abuser but in doing so compromises its mission.

If the Mulakkal case was successful in getting a conviction, then a number of sisters would possibly have had the courage to come forward and speak up about abuse.

As long as the clergy continue to enjoy the inordinate power that comes with ordination, the vulnerable among the people of God will continue to experience abuse, and nuns, especially of diocesan congregations over which the local bishop has complete control, are among the most vulnerable.

If the forthcoming synod on synodality in the church does not address this grave anomaly in what is supposed to be "servant leadership," the church will only precipitate greater scandal instead of fulfilling its mission to spread the reign of God in the world. 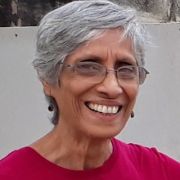 Virginia Saldanha is a theologian based in Mumbai and a member of the Sisters in Solidarity and the Indian Christian Women's Movement. She earlier has represented laity, family and women's issues in organizations of Asian and Indian bishops.

An elder reflects on the transformation of religious life