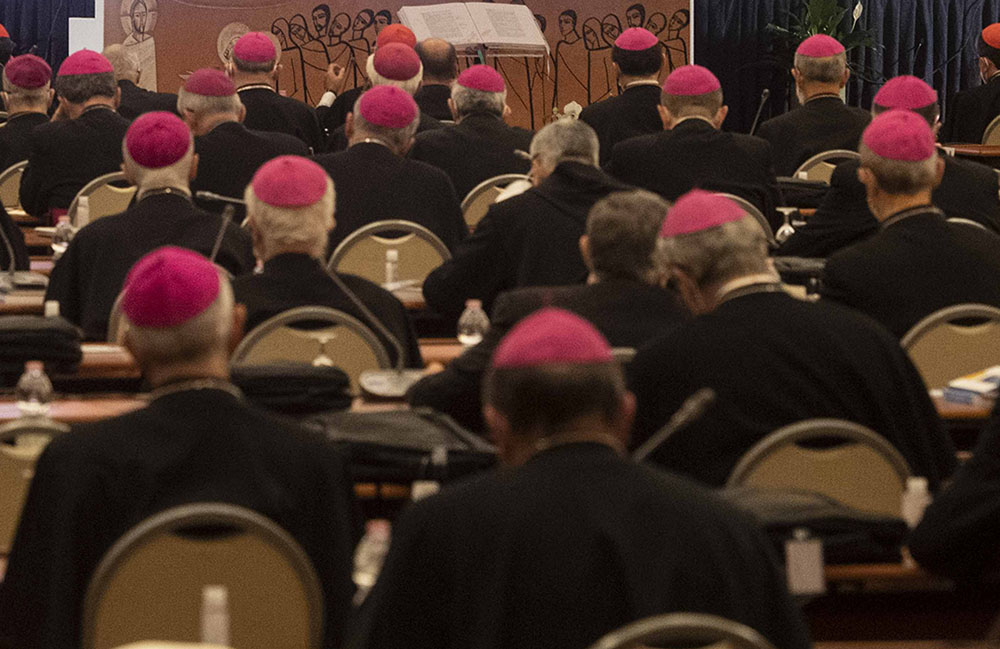 Not long after I finished Sarah Ferguson's new novel Her Heart for a Compass, the tale of a Victorian-era Scottish woman who stood up to patriarchy, I listened to recordings of sessions from the Leadership Conference of Women Religious on the emerging future of religious life. I went to bed feeling discouraged by the questions arising in these particular LCWR conversations because they were more about coming to closure than transforming for the future.

As I slept, my unconscious merged details of the book and the LCWR sessions, because when I woke up, I had to grab a pen to note another question before it slipped away.

Are women religious trying to solve the wrong problem? Yes, we need to care for older religious. We do have a shortage of leadership. We are burdened with buildings and systems that need maintenance. We do have ministries we can no longer attend to. But are any of those the core issue?

Isn't the real issue the fact that women religious are still glaringly under the influence — as women have been for hundreds of years — of patriarchy? Although the feedback of women is part of the preparation for the Synod of Bishops in 2023, women, who have upheld the church and its good works for centuries, will not be fully represented and participating in decision-making at the synod and therefore not truly leading us into the future. What is wrong with this picture?

"Real change must affect not just the visible forms an institution takes, but somehow must alter the spirit, the core essence, of the entity as a whole," Walter Wink wrote in Unmasking the Powers. Is patriarchy the "power" that needs to be unmasked by women religious in order to see real change for the future?

According to Wink, the "powers," the core essence or inner spirit that all institutions, corporations and nations have, are the underlying assumptions and shared images that bring cohesion to the group — and that are often unconscious. It is where power is located. Unmasking it requires bringing it to consciousness and naming it. A particular power ceases to exist and is replaced when people stop living by it.

Can women's religious life survive into the future unless it is courageous enough to name and redeem the patriarchal control of church? We can make structural changes in the "visible forms" of how we live the life, find ways to collaborate as we grow old, face leadership shortages, and close ministries and institutions. But that is simply sustaining what is with a fresh coat of paint. It is not real change.

Patriarchy defined life for women long before churchmen defined a particular kind of life for women who chose to follow the call of Jesus, notwithstanding the fact that Jesus unmasked the spirit of patriarchy and modeled another way. It didn't take long after his death and resurrection for the new movement, the growing church, to be absorbed into the patriarchal culture and become one of patriarchy's staunchest champions. Men in power put women, the poor and the stranger back in their place, where they have remained ever since.

Our foremothers were often chastised if they dared to offer a public opinion, let alone one that differed from the dictates of the powers (husbands, men in positions of power) and that reality was magnified corporately in religious life.

Many of our archives contain instances of churchmen silencing our sisters, removing them from positions of elected authority, dismissing them when they refused to acquiesce to the demands of priest and bishop. Even now, the constitutions of women religious — educated, capable, strong women called by God — must be approved by churchmen if those women are to remain "in good standing."

Churchmen were often ambitious and sought to create strong, powerful parishes and dioceses, and religious women were their workforce. Women weren't their co-creators, nor were they at the decision-making tables. They were the overwhelmingly free and silent labor force. It's impossible to know how religious life would have evolved without patriarchy, but it's time to find out where it can go.

Which makes the question, "How do we unmask the power of patriarchy and live into the liberating spirit of Jesus?" key to our future. How do "Synods of Bishops" become fully "Synods of the Faithful?"

The issue is greater than the church itself. Patriarchy laid the groundwork for capitalism, a system that, when not tempered by a spirit of justice, leads to poverty for the masses and wealth for the few. One could argue that patriarchy, capitalism and anthropocentrism started us on the road to greed and lust for power that decimated Indigenous people, enslaved people of color and brought us to the current climate crisis. 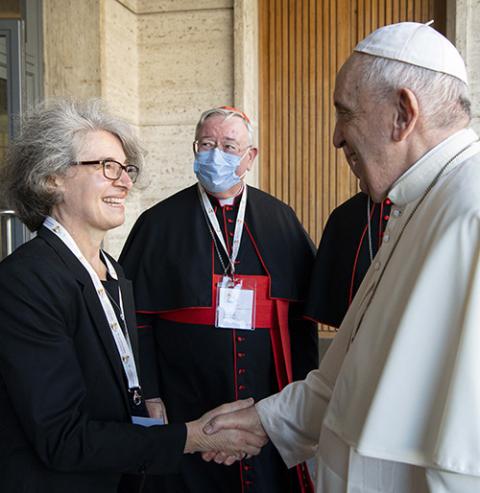 Pope Francis greets Xavière Sr. Nathalie Becquart, undersecretary of the Synod of Bishops, during a meeting with representatives of bishops' conferences from around the world at the Vatican Oct. 9, 2021. (CNS/Paul Haring)

Women religious are committed to righting the wrongs of poverty, racism and the climate crisis. I wonder if that is even possible without pulling up the root of patriarchy?

In his book Let Us Dream: The Path to a Better Future, Pope Francis writes, "We have seen this awakening also in society: in the #MeToo movement, in the many scandals around powerful politicians, media moguls, and businessmen. A mindset has been exposed ...

"In these cases, the root of the sin is the same. It is the ancient sin of those who believe they have a right to own others, who recognize no limits, and lacking all shame, believe they can use them as they wish. It is the sin of failing to respect the value of a person."

How better to describe patriarchy? Yes, the mindset, this insidious power, has been exposed. Now what will we do with it?

In speaking of the climate crisis, Francis says, "For a long time we carried on thinking we could be healthy in a world that was sick. But the crisis has brought home how important it is to work for a healthy world."

I would suggest this parallel: Religious life thought it could go on in a system that was sick — patriarchy. But the crisis in religious life has brought home how important it is to work for a healthy church and society.

There is still time for women religious to lead the way. Freeing the world of patriarchy could be a phenomenal legacy for us to leave those who come after us. How? We can immediately remove all exclusive language for humans and for God from our prayer, our Scripture readings, what we post online, write or speak — a call Benedictine Sr. Joan Chittister made more than 40 years ago.

Through our participation in the synodal process, we can call for and demand full and equal participation — at least 50% women — in the synod itself. Patriarchy has too many incentives for those who live by it — including churchmen — for them to want to change it on their own. That means it falls to those of us who are on the perimeter to force change. What will the consequences be if we do not participate fully not only in the process but also in the culmination?

It may be too late to save the current form of religious life, but for the sake of what may emerge in generations to come, for the sake of women everywhere, for human wholeness and the survival of our world, we must end patriarchy now.