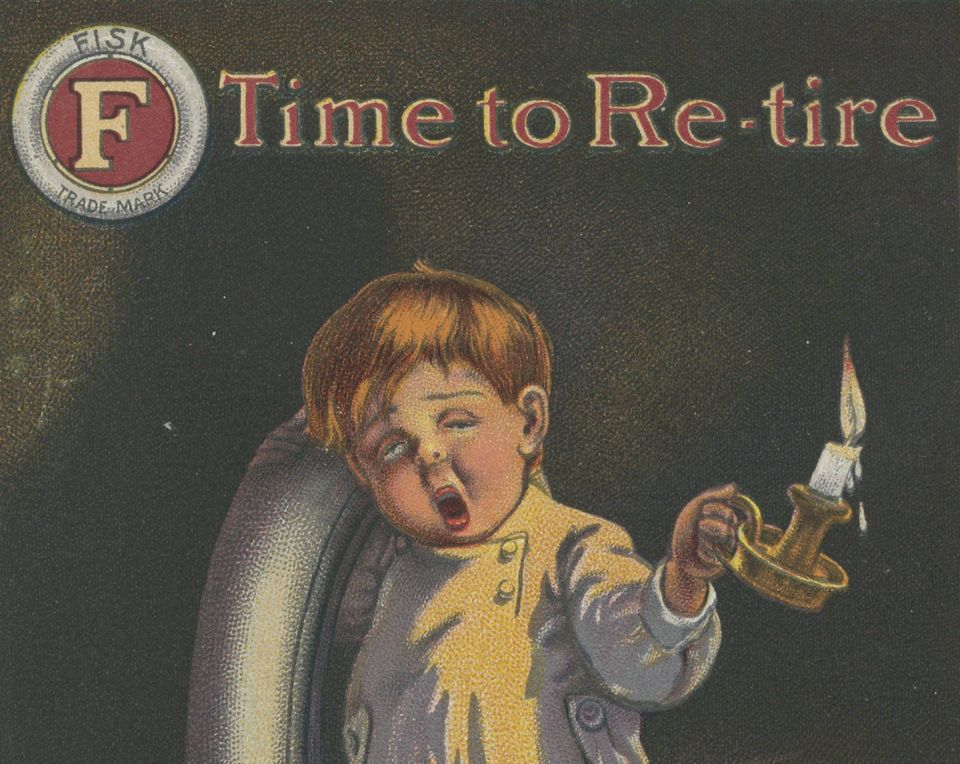 Above is portion of a postcard that shows an ad and slogan for retreading services by Fisk Tires. (Wikimedia Commons/Digital Public Library of America, via Ohio Digital Network/Toledo-Lucas County Public Library)

My maternal grandparents lived next door when my siblings and I were growing up and we spent countless hours there enjoying Grandma Wahl's love of playing cards and games. Grandma and 7-year-old me made an expert canasta team.

One of the most fun games in her closet was a board game about advertising slogans. The game was by then decades old, but here we were in the 1950s learning about American companies and their slogans from the 1920s. The slogan I remember clearly was from the Fisk Tire Company that used the slogan, "Time to retire with Fisk Tires."

The play on words was masterful so that’s probably why it's stayed with me all these years. The popular ad featured a sleepy child holding a candle with a tire over his shoulder. While putting a child to bed can often be an unpleasant and maybe impossible task, the Fisk Tires' child is so sleepy that he can't wait to get into bed. Of course, a car owner would remember this image and think about re-tiring the car.

In May 2018 I had a memorable opportunity to travel to China. It started as a simple invitation every summer from a faculty member, Dr. Lin Guo in the Xavier University Health Services Administration Department that I then chaired. "Come to China so I can show you my country!" Lin would say every May as he zoomed away to spend the summers in his native Guangzhou. It ended with a way to actually do that — cashing in a lifetime of airline miles, finding a terrific travel company and having Lin as the interpreter (he speaks Mandarin and Cantonese).

Over a week's visit we spent time in three Chinese cities  Beijing, Xian, and Shanghai. On the first day in Beijing, we visited Tiananmen Square, which was historic, but what I remember more vividly was a nearby city park filled with young senior citizens. I asked Lin why all those younger folks had time during the day to be in the park, playing cards or chess, gardening or walking. "Because the mandatory retirement age in China is 60 for men and 55 for women," he said. 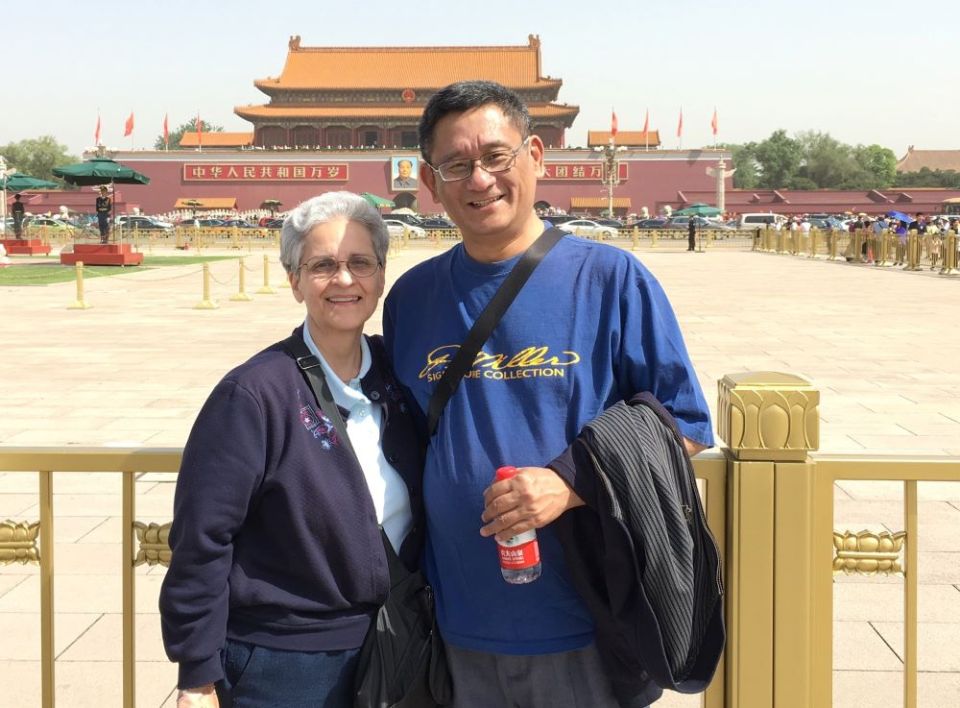 I've never forgotten that. Here in the United States, there really is no mandated retirement age; individuals figure out on their own how long they want to work at a job based on lots of factors, including retirement funds and health. Think about being a woman in China at age 55; were you ready to retire from ministry or a job when you were 55? Quite young, don't you think?

In religious life we’ve taken a different attitude toward retirement that’s described by the title of an article I saw in Catholic Review: "Nuns Never Retire Until They Expire." That has become a common saying!

Do you feel that way? Many years ago, my congregation used the term "Third Age Ministry" to describe what a sister did after leaving her predominant ministry. The operative word here is "did" — as though a sister was expected to be doing something constantly until arriving in heaven.

Baseball even uses the term "retire" related to batters. "Retire" indicates that a batter didn’t get on base (strikes out or makes an out) and when three outs occur, the side is "retired." Of course, the game goes on and those same players return to the batting lineup to try again.

The term "shy and retiring" comes to mind, as though that's an ideal woman. Instead of asserting oneself, expressing an opinion, or taking the lead on something, it used to be preferable for women to simply be a background person with no voice or presence.

So what is retirement? Living a sleepy life, going to bed, never expressing another opinion, being imprisoned by aches and pains or relegating oneself to being forever in the background? I think women today and certainly sisters deserve something else and something better.

Back in the 1950s and 1960s, girls graduating from high school had limited career paths: Girls could be teachers, nurses, secretaries or housewives. And that was pretty much it for career options. Today women are serving in any and every field, from military combat service to research, medicine, entrepreneurial companies, law, elected offices, and much more — and many also are married and raising a family as well. There’s nothing "shy and retiring" about women's roles today.

For centuries religious sisters somewhat followed the acceptable career path of women by serving as teachers, nurses and domestics. Add to that, though, the pioneering spirit of foundresses who coursed the country, establishing foundations, starting missions and guiding institutions. Sisters were hospital administrators decades before lay women ever had the inkling of an opportunity to do that.

For sisters, the message should be this: It’s OK to retire. It's OK to change ministry hours, to go part time, to lessen duties, to move from a place. It's OK to be in a ministry and to move on. It's OK to come home to a motherhouse. Congregations appreciate the untold ways each sister ministers and how she contributes — financially through a salary or otherwise. Congregations have all been planning prudently for satisfactory retirement funding in place for the congregation's future, thanks to members' lifetimes of ministry and savvy investments by prior leaders and financial staff.

Why don't we grab the privileges of being older and live every day to the full? It's OK just to "be," which is different for each of us. We sisters have been active our entire lives, so the concept of a Third Age Ministry might actually be a fourth, fifth or even sixth ministry for some. The beauty is that each sister can discern that for herself.

Let us "be" and "do" as the spirit reveals and leads. We retire from ministry but not from mission. Retirement doesn't have to mean being idle or watching TV all day; hobbies and interests can lead to fulfilling continued service as we all live our mission. Let's keep sharing our gifts and talents, although perhaps in different ways than a 9-to-5 job.

For those of us who are way beyond the Chinese retirement age of 55, we’re in a unique time. Oh yes, a few aches and pains manifest themselves day to day, but the peace, contentment, and knowing that you don't have to think about some ministry problem any more is incredibly freeing.

Next year, 2023, will be the 60th anniversary of the 1963 film "Bye Bye Birdie," based on the 1960 nook and musical of the same name. At the top of our voices, let's sing along with Ann-Margaret in her rousing signature song, "A Lot of Livin' To Do." Because we do!

We sisters are no longer shy — if we ever were. We've done a ton and accomplished so much. We're not retiring, either, if that means fading into the background. But a slower time to enjoy a walk or a garden uplift is well deserved. "It’s time to retire with (our own) Fisk Tires." 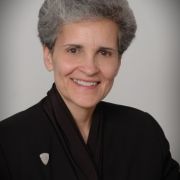 Nancy Linenkugel is a Sylvania Franciscan sister who was elected her order’s congregational minister in 2021.

Religious Life | Shy and retiring? Or something more?