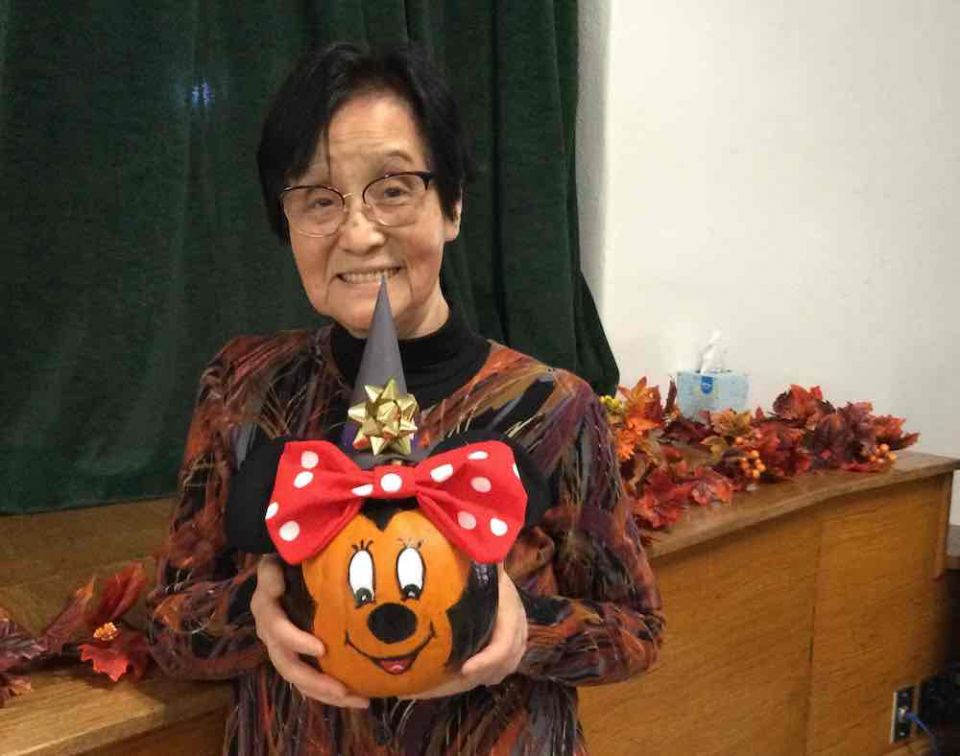 It was a moment of pure joy! School Sister of Notre Dame, Regina Kabayama appeared dressed as Minnie Mouse, tossing her little purse and smiling with her sunny personality! Who was this 5-foot-2 source of light that has graced our halls, shared her marvelous sushi, and danced her way into our hearts? She is still a child even as she welcomes her 90th birthday on March 4, 2021.

Like the rising sun, her spirit brings us energy!

She was born in Osaka in 1931, where her father had a thriving tailoring business for wealthy Japanese businessmen. However, one month before her birth, he died of pneumonia, leaving her mother with four children: an older brother who later became a diocesan priest, two sisters and her — the new baby. Her mother lived to the age of 96, preceded in death by all her children but Regina.

Her mother supported them by sewing for other families. When she sewed, she would put infant Regina in a basket, along with a little cat to keep her company.

From her mother, Regina learned deep faith, hard work, the meaning of sacrifice, and openness to different people.

She told me that her father's distant ancestors were shamans on the Amami Islands, the center of their government and religion. When Regina visited her relatives there as an adult, she visited the cave overlooking the Pacific Ocean where each morning her shaman ancestors would greet the rising sun and lead the islanders in worship.

Later her ancestors converted to Christianity and became strong Catholics: Her paternal grandmother was born in the south of Japan where they suffered persecution for their faith.

Their fidelity to Catholicism was unusual, knowing that only 0.3% of Japan is Catholic today.

The seed of her religious vocation was planted at the age of 5 when Regina was sent to kindergarten with the French Sisters of the Infant Jesus. She learned to address them as "Mother" and wanted to imitate their kindness.

When the family moved to Kyoto, they were welcomed by the Maryknoll priest; her mother became his housekeeper and cook, with the children helping.

Other Maryknoll priests were the first Americans Regina met; they taught her English phrases, played with her, and "became like older brothers to me," she remembered fondly. "One of them found two doggies and he gave one to me; his was named 'There' in Japanese, and mine was named 'Here.' "

One of the priests had a phonograph and loved opera. He shared "Aida" with Regina, and she loved it, too. (Knowing "Aida" by heart, she sang it in her soft voice as she was telling her story.)

In 1941, she was about 10 years old when the Japanese government sent military police to check on the priests. The military constructed a three-story observation tower on the parish property to watch the neighborhood, noting who was attending church, following the priests' activities —  because the government considered them spies.

Realizing a child would be trusted more than an adult Christian, Regina's mother told her to befriend the policeman. Eventually Regina invited him to listen to Father's recordings of Verdi's "Aida."

Sometimes the neighborhood children would "boo" and mock her as they passed. Her mother assured her that this was a blessing from God who was inviting her to suffer for her faith.

Many of the priests were interred in a camp during the war. Before they were taken away, some of the military police who had come to respect them organized a farewell for them. After the war, some of them secretly became Catholics.

Her sister Reiko would bake bread and take it to Fr. Meyer. The guards crumbled the first loaf to see if anything was hidden inside. The second time the policeman who was guarding the church compound went with Reiko to keep her safe and to be sure Father got the entire loaf.

During the war, she and her family had to clean a Shinto shrine and she objected. Her mother said, "Go and say an Our Father and Hail Mary."

Interrogated during the war, her mother was asked which god she accepted, the emperor or the Christian God? Her response: "Of course I respect the emperor because he is a symbol of Japan, but God made everything, including the emperor, so I can't compare the two. They are on two different levels." 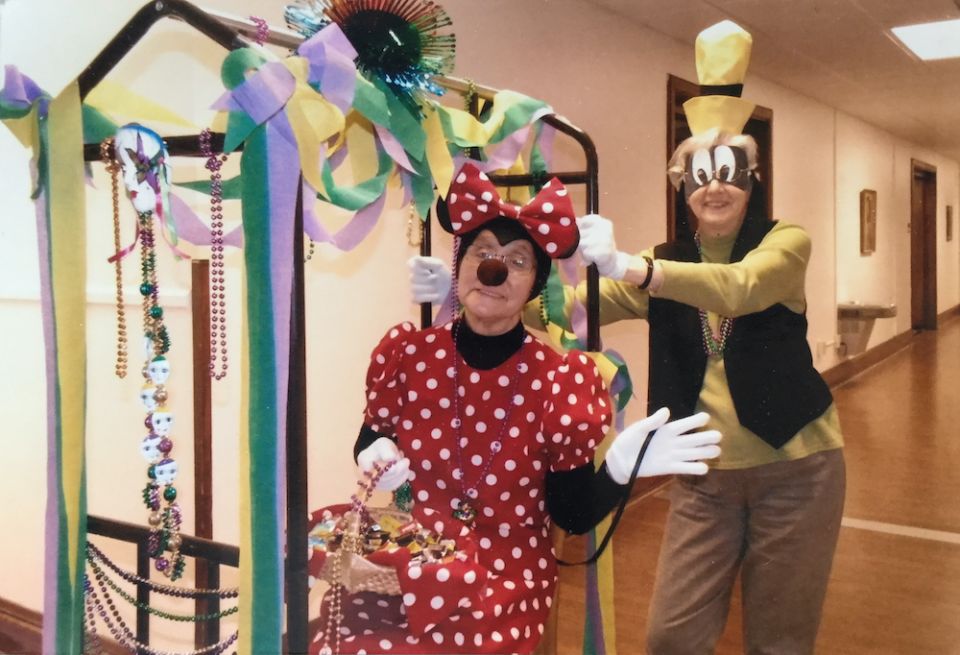 Sr. Regina Kabayama as Minnie Mouse and her dear friend Sr. Josephine Nieman as Goofy at a costume party for Mardi Gras in St. Louis (School Sisters of Notre Dame)

Throughout the bombing, their house stayed intact, but they fled to the underground shelter every time the sirens blared. Food was so scarce that they resorted to eating grasshoppers and weeds, but occasionally they managed to buy sweet potatoes on the black market.

She was 14 when the war ended in1945; it was a very dangerous time. In June, she became sick with appendicitis. She described how the doctor removed her appendix and put a tube in the incision. For two and a half months she had several painful surgeries, incessant pain, no antibiotics or proper medicine; she had a high fever and pus oozing from her. "I smelled bad," she grimaced, remembering the experience. The doctor thought she would die before the end of the year. "My friends came from school and they would make funny drawings in a little book that made me laugh, but the laughter opened the incision again."

On Aug. 15, she needed another surgery. "My mother said: 'Today is Assumption day, so maybe Blessed Mother will help you, so please pray.' So, I prayed in a very, very soft voice very slowly, 'Hail Mary full of grace.' And 'I don't want to die. I don't want to die.' "

"In the afternoon the surgeon put yellow medicine on me to prepare for surgery, but we had to wait for the emperor's message. Outside my window an American plane with a machine gun went past, but I couldn't move so my mother said, 'If we die, we die. All right, we die. Blessed Mother, help us!' Suddenly I felt my abdomen very wet, a funny feeling around here," she pointed. "So my mother ran to the doctor to come. Doctor came, lifted the bed sheet, 'What? It's a miracle!' When my mother changed my diaper, the pus came out! Nothing! All gone!!"

When Regina spoke of the emperor, her tears said more than her words. "Emperor said to MacArthur, 'You can shoot me but do not punish the Japanese people. They have suffered enough.' And MacArthur respected the emperor." 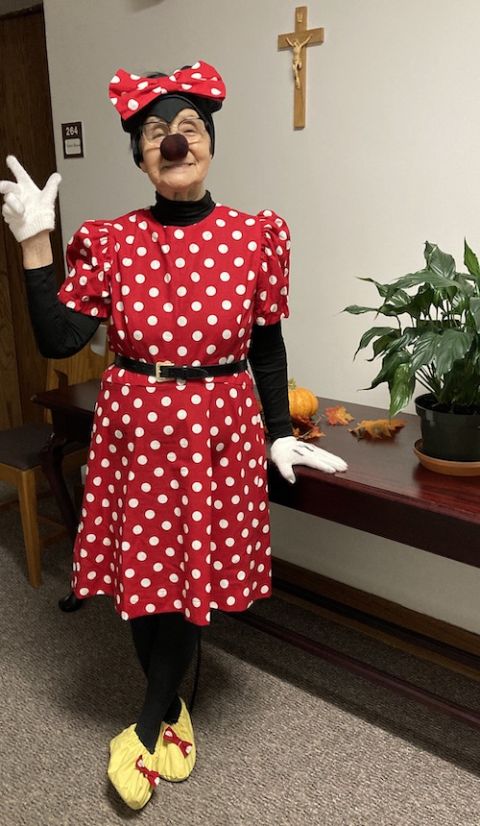 Sr. Regina Kabayama as Minnie Mouse — like the rising sun, her spirit brings us energy! (School Sisters of Notre Dame)

After the war, her American Maryknoll friend, Fr. Felseker, came back to Kyoto to bring food and clothing to the Japanese people.

Her health slowly returned, and in 1948 she met the School Sisters of Notre Dame. Entering the community 10 years later, she served as elementary teacher in Japan, a seamstress in Liturgical Fabric Arts, and became beloved community member.

Other Japanese women joined our community, often through the example and encouragement of our Maryknoll priests and sisters who have truly been a blessing to us.

I am filled with awe how Regina's spirit was nurtured with a diversity of experiences — including shamanic spirituality — and how her faithful Catholic family, strengthened through persecution, blessed her with resilience and commitment.

She continues to have a contagious "zest for life." When she had to lie on her back for 60 days after neck surgery, she listened to the Carpenters and read Agatha Christie mysteries!

This "daughter of the rising sun" continues to be a lovely presence among us. Whether elegantly leading a procession in chapel, sewing a classic vestment, or waving as Minnie Mouse, Regina has shown me the Sun of Justice who glows in her heart.

I note with thanks the assistance of Sr. Josephine Nieman in writing this column.