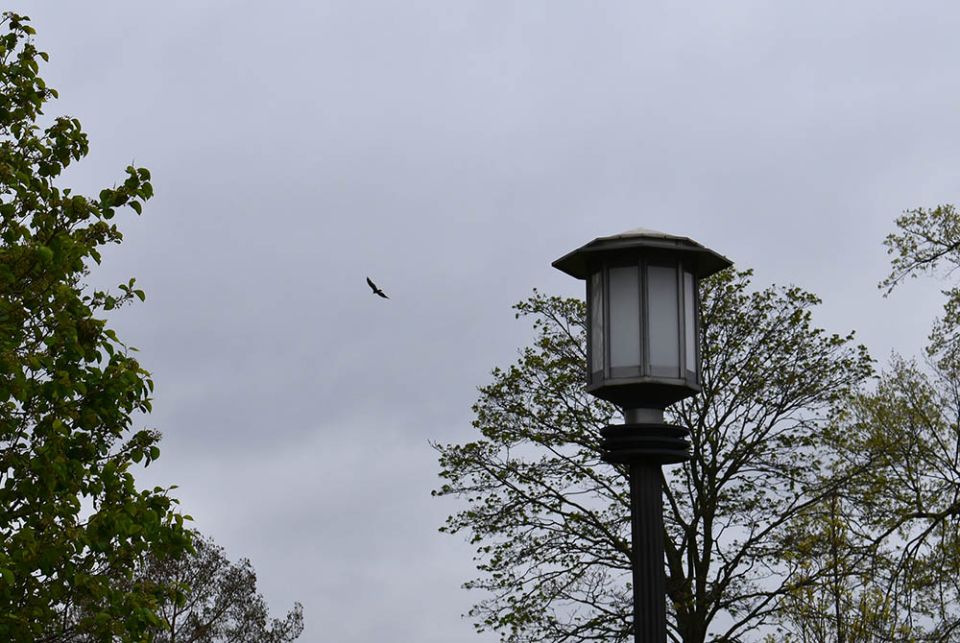 A crow glides on the wind over Mount St. Scholastica, Atchison, Kansas (Julie A. Ferraro)

Since moving to Kansas a year ago, I've lived through a complete weather cycle: rains, dry spells, tornado warnings, and Mother Nature's inability to decide if it's winter, spring, summer or fall.

We had 80-degree temperatures on March 2, and in early May, the thermometer barely reached 50 degrees.

Sometimes, the dramatic fluctuation occurred within the same week! A very warm April Wednesday could be followed by snow on Thursday.

In the midst of all this, as I walk around the monastery campus at Mount St. Scholastica, I often find myself looking skyward. Most often, if I hear birds overhead, I like the challenge of snapping a clear photo of their motion.

When it comes to the crows, though — or ravens (hard to tell from ground level) — I've been amazed at how they love to glide on the wind, and it can be quite windy many days in this state. They spread their wings wide and take advantage of the powerful air currents, making it appear quite effortless to remain aloft without madly flapping their wings.

Contemplating this feat, I couldn't help but juxtapose it with Ted Dunn's presentation at the International Union of Superiors General (UISG) triennial plenary in Rome this year.

One of Dunn's statements was especially jarring: "Religious life will rise again. But there are hard choices ahead and no quick fixes or off-the-shelf solutions. All of the options you have will require hard work. There is no escaping it."

Related: UISG opens triennial plenary with talk of vulnerability as way into the future

It struck me as an indictment of the crows gliding along on the wind, who might mistakenly believe they can remain aloft with no effort indefinitely. At some point, the wind decreases, and the crows have no choice but to flap their wings — or land.

The comparison to 21st-century religious life is fairly plain. Communities of vowed men and women, according to Dunn, can't just glide along as they have in the past. Hard choices must be made, with choices made not through fear, but with courage.

I have lived and worked with a number of religious communities over the past 10 years — and visited many others in the years prior to that, getting to know the members, their charisms and ministries. I have witnessed the good and the bad, the highs and lows, and the struggle to make sense of this rapidly changing culture in which we live.

News articles on entertainment websites have pointed out how certain sitcoms from as recently as the 1990s couldn't be produced now, because their humor was inappropriate, or movies from the "golden age of film" now require disclaimers about their content (including some by Disney). They reinforce the speed at which humanity is trying to address serious issues of equity, respect for all people, and accountability.

Some of those who have been mostly isolated from the world, within the walls of a monastery or convent — even after Vatican II threw wide the doors and eliminated many restrictions — aren't accustomed to the information overload. Nor can they deal with the technological advances that are touted to make life easier, but often present their own type of danger — as in identity theft or scams.

When a woman, of whatever age, discerning her path in life — and, possibly, a religious vocation — interacts with the aging members of these communities, she may discover that they don't speak the same language.

The image of a crow soaring high on the wind — the sisters — versus those on the ground collecting food or in the trees building nests — the inquirers — comes to mind.

There is a disconnect that too frequently can't be overcome.

Is there a solution?

I, having no college degree but plenty of life experience, offer one, based on St. Benedict's dictum in his Rule to welcome all as Christ:

Stories of such openness have filtered out of Ukraine, where religious have brought men, women and children fleeing the violence into their convents and monasteries. This opportunity to feed and shelter the refugees also gives those vowed religious a down-to-earth education in family life and interaction.

As religious communities in the United States — and elsewhere — find many of their rooms unoccupied, bringing in summer interns, residential volunteers, or even working folk who are seeking to deepen their own spirituality to share daily life, in the fullest sense of the word, will do wonders for all involved.

After all, the crow soaring on the wind must land sometime, and work together with the other birds to survive.

From my personal experience, I can see where this suggestion would be rejected by many, out of hand. A group of sisters, having spent many years — decades! — together might be reluctant to disrupt their set routine by allowing others with diverse viewpoints to move into the cloister. They might justify their reluctance with the need for a lengthy discernment process, ultimately — albeit politely — denying access to those interested.

For religious life to survive, however, it must begin evolving sooner rather than later.

A crow gliding high in the sky must recognize that the wind will not blow indefinitely.

The UISG plenary wisely addressed a theme of vulnerability this spring, but how many will take the message home and put it into action? How many superiors, of whatever community or charism, will allow these insights and ideas to be overruled by the members who fear letting go of tradition, or facing the world head-on?

Perhaps the saddest objection would be from those who staunchly believe they would rather see their community end than see it change and evolve.

Like a crow determined to continue gliding, even after the wind has faded — and crashes into a tree.

The sisters who have dedicated their lives to a founder's vision, to a charism, to the vows, should never stop sharing that message with others. When the time comes that they might not be able to venture out to do so, they can open their doors and invite people in.

By being a living example of Christ's love, hospitality and genuine kindness, they will not only find ways for their community to endure, but inspire others to follow in their footsteps in ways that might seem unconventional while, nonetheless, keep the spirit alive and thriving.

The crow might have to accept that the wind has shifted, but it will be able to soar aloft once more.

Read this next: Tilling the hard ground of our defenses and old ways surfaces transformation

Religious Life | We can glide in the sky, but the wind will not blow indefinitely

Learning from retreats at Lake Erie for the everyday