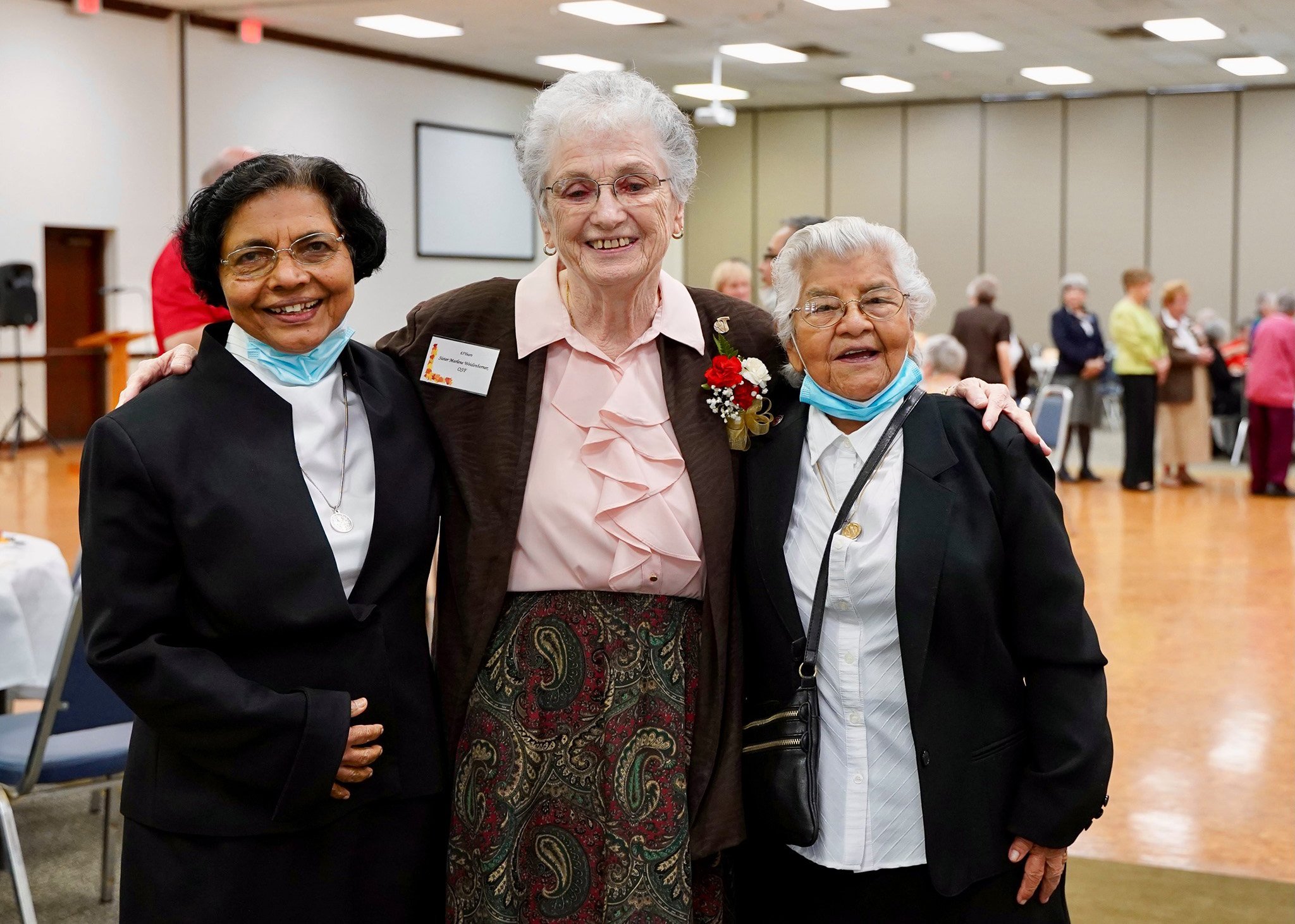 Sr. Marlene Weidenborner, a Franciscan Sisters of Allegany, N.Y., (center) is seen with Srs. Elizabeth Mathai (left) and Mary Romana Gomez during a reception following the "Religious Jubilee Mass" celebrated at the Cathedral of St. Jude the Apostle on Oct. 30 in St. Petersburg to honor the jubilees of several men and women religious. (CNS photo/Katie Camario, Gulf Coast Catholic)

Right after high school, Sr. Marlene Weidenborner entered the religious community of the Franciscan Sisters of Allegany, New York, although she had no intention of staying.

"I entered so that I could get rid of the idea of being called to be a nun," she said.

At the time, she had plans to attend college and was dating someone in the U.S. Air Force, but the call to religious life wouldn't go away.

"When God calls you, you may not like it at first, but it's there and it is a gift,"  Weidenborner told Gulf Coast Catholic, the news outlet of the Diocese of St. Petersburg.

She entered the convent expecting to receive a clear indication that a religious vocation was not for her. Instead, she received confirmation that it was, and she stayed when many didn't.

"For some reason or another, God was calling me. I entered not wanting to enter, but not able to shake the idea that I should. So, I guess my heart was open enough to say, I will give God chance,"  she said.

Born and raised a Catholic, Weidenborner attended Catholic grade schools where most of her teachers were women religious. This year, she is celebrating her 65th anniversary of religious life.

She and other religious women and men celebrating jubilees in 2020 and 2021 were honored Oct. 30 at the "Religious Jubilee Mass" at the Cathedral of St. Jude the Apostle.

She helped plan the celebration in her role as the Diocese of St. Petersburg's vicar for religious.

Her first assignment as a religious sister began just months after she entered the convent. She was sent to teach third grade at an elementary school in Niagara Falls, New York.

What followed were many years of service in education. Weidenborner worked her way up from that elementary school teaching position to become superintendent of schools. She has served on many boards and has traveled to Jamaica and Brazil to fulfill leadership duties.

She said that like her, we all have a calling, or vocation -- and that whether it's a calling to married life, the single life or to the religious life, we need to be open to what God is asking of us, get in touch with it and then respond.

For her, a religious vocation meant God was calling her to something different, where she would find happiness. She said those who are discerning consecrated life as a religious should pray and be open to the call.

"Find a good spiritual director, someone who can walk with you, who is wise, and who can get to know you. And, let God do God's thing," she advised. "I believe that God is still calling people to religious life, I'm not sure people are listening, but if they do listen and God is calling them, then this is a path to their genuine peace, joy and happiness if they follow it."

Likewise, she said parents can encourage their children to hear God's call for their lives.

"All parents want their children to be happy and if God is calling your child to a religious life, that's where happiness will be found,"  she said. "It might be tough for you because you're not going to see grandchildren from that child of yours, but if you know that they are happy, and that they are doing what they're supposed to be doing, then that has to be an internal happiness for you as a parent."

Following that call is what Weidenborner said has truly blessed her life because she is doing what she is supposed to be doing.

"I have found peace and joy and happiness. I have found good friends. I think the bottom line is it hasn't always been easy. But life for anybody isn't always easy. There has always been a sense, of this is where God wants me to be."