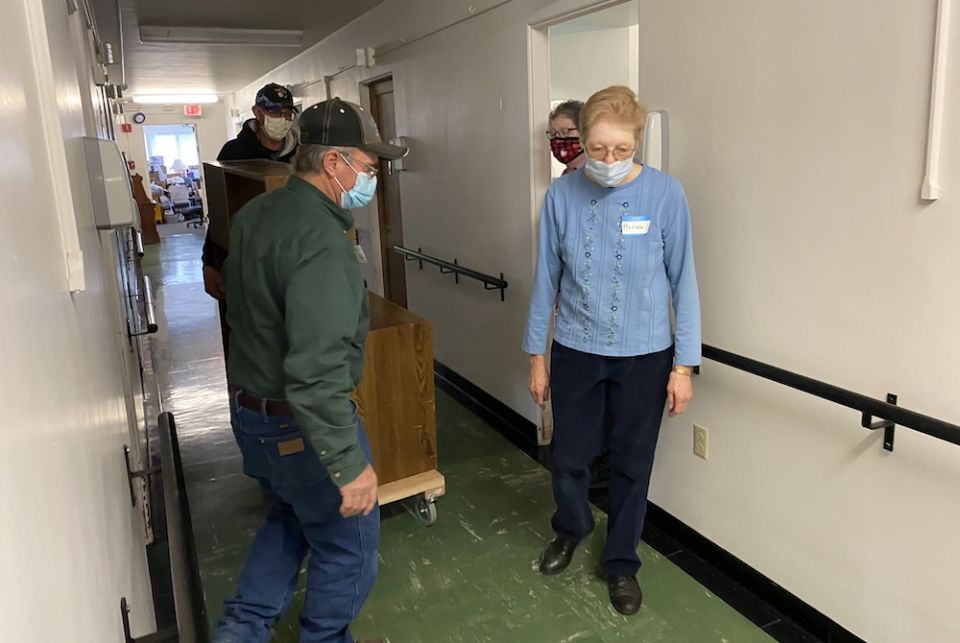 Benedictine Sr. Placida Wemhoff accompanies workers as they move furniture from the residential Annex at the Monastery of St. Gertrude, Cottonwood, Idaho, prior to starting a renovation project in October 2020. (Provided photo)

The pioneering spirit that brought settlers — and Benedictine sisters — to the northern Idaho wilderness more than 100 years ago will flavor a new intentional community for Catholic lay women being planned at the Monastery of St. Gertrude.

From the historic complex located three miles outside the small town of Cottonwood, 158 miles or about a three-hour drive from Spokane, Washington, the community of as many as 150 sisters has served the region in education, health care and social services for more than a century.

As the face of religious life continues to change, and with an awareness that lay people are seeking to live a more structured life according to the Rule of St. Benedict, the 30 current sisters have voted to approve the creation of the Benedictine Cohousing Companions.

Prioress Sr. Mary Forman recalled how the community's chief financial officer happened to see a YouTube video, nearly four years ago, about mostly retired women in England living together in community. "We viewed it as a council and ministry board together," Forman said. "One night, Teresa woke up with a brainstorm, 'Why can't we do this here?' "

Sr. Teresa Jackson, membership director for the monastery, Forman, and the other sisters began discussing what such a community would look like, especially since fewer women were joining as vowed religious.

"We didn't just want it to be a retirement community for women who wanted to go to Mass every day," Forman said. 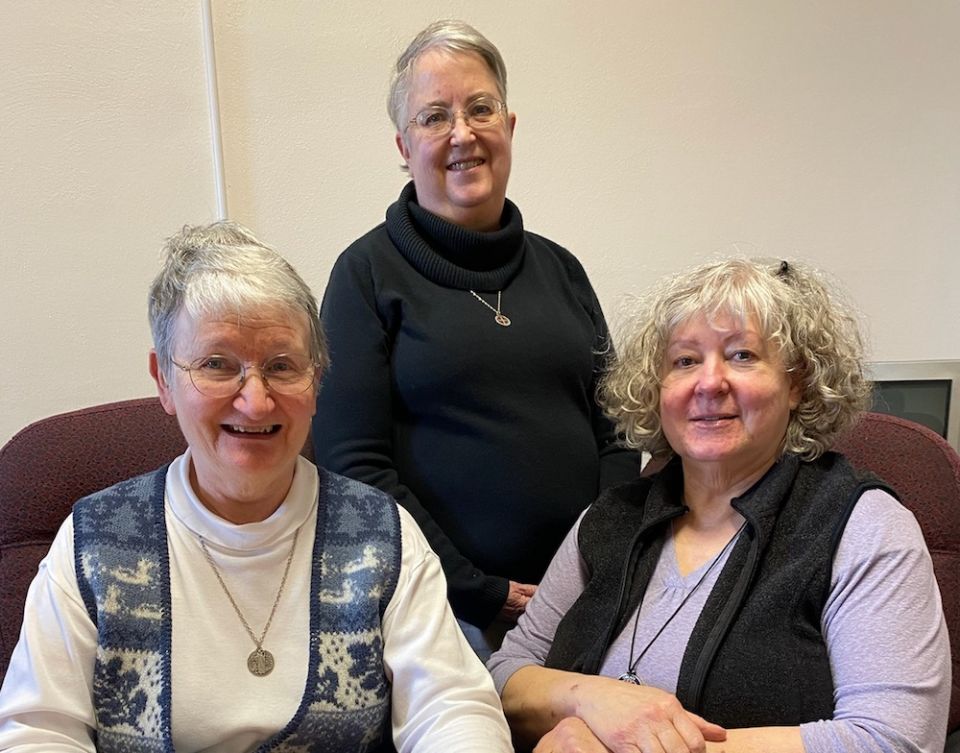 JoAnne Zimmer, one of approximately 90 oblates at St. Gertrude's, found the idea captivating. A retired general contractor, she has served at the Monastery of St. Gertrude as a live-in volunteer since 2014.

Zimmer explained how she came to St. Gertrude's. She was part of a nine-month program Jackson was facilitating on being a monk in everyday life, via computer and weekend retreats. At one point, when Jackson was visiting Boise and needed a ride back to St. Gertrude's, Zimmer obliged. "I never left," she added.

During the early days of discussions about the Benedictine Cohousing Companions, Zimmer drew on ideas from cohousing workshops she had attended in Boise. "There was one thing lacking from those workshops: something that binds people together," she said. "I saw Benedictine spirituality as a link."

Zimmer was part of early groups that gathered to learn more about the concept. Then, a group of eight women — sisters, oblates and friends of the community — came together in August 2017 for a weekend to formulate a mission statement and distill ideas and to discuss the qualities women living as cohousing companions would need.

Among those qualities, Jackson said, are the personality and temperament to live with other people in close quarters, the ability to be cooperative and to engage in conflict resolution and common decision making. "Community is not easy, and it's not for everybody," she said.

Jackson joined with Forman and two laywomen familiar with the community to form a steering committee. Using the book Finding Community by Diana Leafe Christian, the group addressed financial, legal and mission-related issues involved in such a venture.

As the program developed, the entire community held listening sessions in spring 2018, where questions were raised and answers found. In June 2018, the sisters gave their final approval to move forward with Benedictine  Cohousing Companions.

Part of the plan detailed where the cohousing companions would live. The fifth floor of the sisters' 70-year-old residential building, called the Annex, was occupied by few sisters and could be renovated to provide the needed space, Forman explained.

Remodeling involved more than that one floor, though. Pipes were 25 years beyond their usefulness, and asbestos in the tile flooring required attention throughout the building.

The community agreed upon a $3.2 million construction project. It began with the sisters moving temporarily to the Spirit Center, the retreat center on the monastery grounds, in October 2020.

Gone will be the small bedrooms and shared bathrooms on each floor for all residents of the monastery. Using many of the existing walls, studio apartment-style living quarters with private bathrooms will replace the more traditional religious community layout.

A kitchenette on the Annex's fifth floor will be available for snacks and coffee, with suites for up to nine cohousing companions, Jackson said.

Five women have already expressed serious interest in being part of the Benedictine Cohousing Companions, Jackson said. They range in age from their 60s to 80s.

Zimmer, one of the five, and the others have been meeting periodically with Jackson via Zoom during COVID-19 restrictions, to get acquainted with each other, share and ask questions. The hope is to officially welcome the group in late 2021, depending on what is happening in the women's lives. 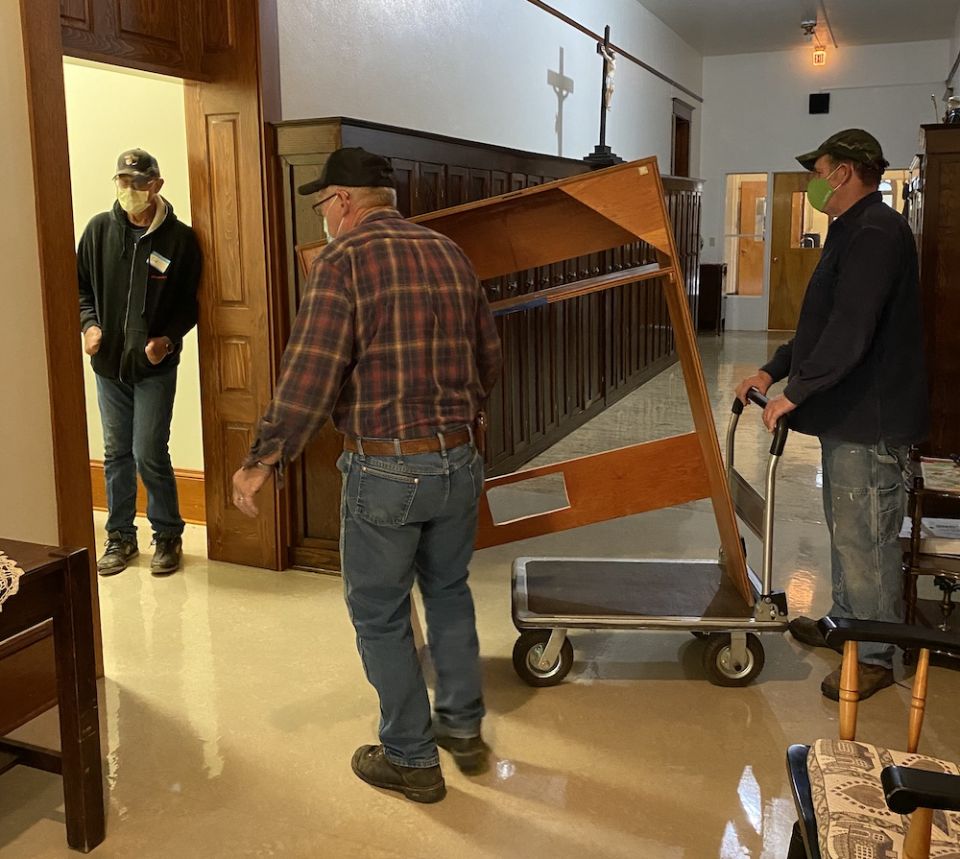 Workers from Arnzen Construction move furniture prior to starting a renovation of the residential Annex at the Monastery of St. Gertrude, Cottonwood, Idaho, in October 2020. (Provided photo)

"We want to have a community to start with, rather than just one person," Jackson said.

The "community within a community" concept integral to the cohousing companions will allow for participants to volunteer for projects with the Benedictine sisters, Zimmer said. Washing dishes after meals is part of community life, and the sisters do canning, make pies from the apples picked in their orchard, and decorate the chapel for liturgies.

"There's just all sorts of opportunities to volunteer, so you don't spend your retirement years idle," Zimmer said.

Zimmer isn't idle, to be sure. She serves as the volunteer renovation coordinator for the Annex project at the monastery. She interacts with the project superintendent and coordinates weekly meetings with the subcontractors. Photographs she snaps of the progress are shared with the sisters.

Women who become Benedictine  Cohousing Companions must be single — not in a committed relationship or married — without dependents or pets. They must be financially and physically independent, Jackson said. They will also pay a modest rent.

Zimmer is hopeful that younger women might want to be part of Benedictine Cohousing Companions, especially if the option to work remotely allows them to support themselves financially.

This drawing shows the layout of the fifth floor of the Monastery of St. Gertrude's residential Annex, with an overlay of the new renovations, creating suites for the Benedictine Cohousing Companions. (Provided photo)

Six other interested women, who are not only from Idaho, but also Washington, Oregon and Illinois, joined a Zoom meeting on Jan. 19, where Jackson explained the program in detail.

Jackson quoted poet Mary Oliver in her presentation, "Tell me, what is it you plan to do with your one wild and precious life?" Pointing out how Benedictines blend continuity with change, adapting to the needs of the times, Jackson added that the cohousing companions arrangement is a much more creative adaption than some others over the years.

She advised the participants to couple their discernment with prayer, and hopes those interested are able to visit this summer, if pandemic restrictions permit.

Cohousing companions will not profess vows like the sisters, and need not be Benedictine oblates. The women will commit to living Christian values as guided by a Benedictine spirituality. They will share meals with the sisters, join in the Liturgy of the Hours, Mass and public activities, Forman said.

"They'll really share with the whole monastic community," Jackson said. The length of commitment hasn't been worked out yet, she added, but, "it's meant to be indefinite."

Formation sessions will allow the women to incorporate themselves into the monastic community, Jackson said. Getting used to a new place and culture, along with learning how the monastery works, the Benedictine nature of the place and what it means to be Benedictine, will be part of the women forming their own community.

"You need a little time to adjust, then go a little deeper, then deeper still," Jackson said.

With construction on the Annex continuing into the spring, "We haven't worked out all the dynamics," Forman noted.

"We're excited and occasionally nervous," said Jackson. "The best I can tell, this hasn't been done before" by any religious community.

[Julie A. Ferraro has been a journalist for more than 30 years. She recently moved from Yelm, Washington to be part of an intentional community with the Sisters of St. Francis of the Neumann Communities, who sponsor a house of discernment in Pittsburgh. You can read more about her experience with that here.]

A symbol of mission and friendship