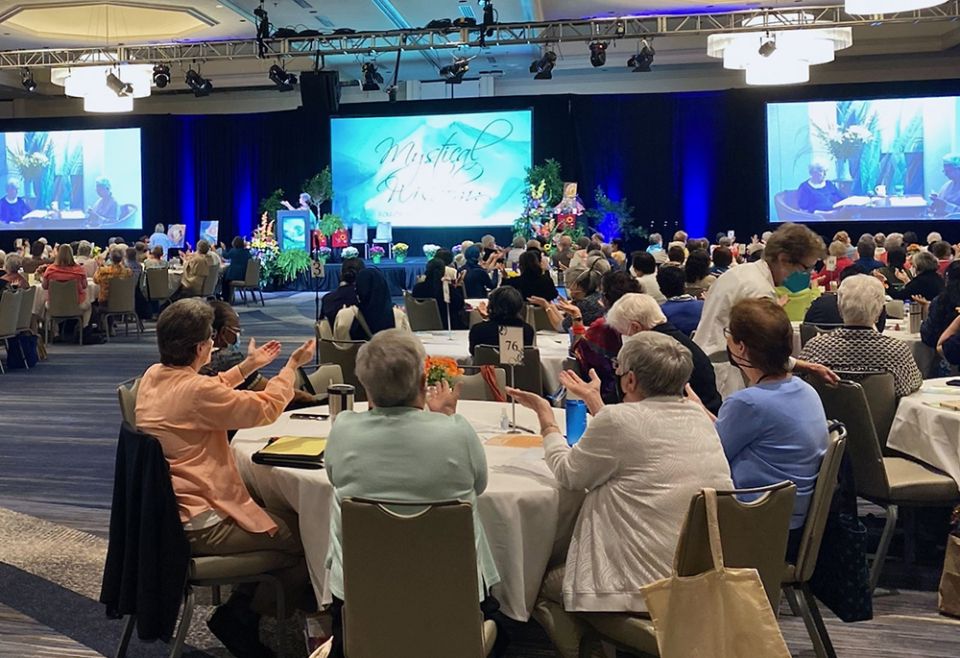 The two scholars spoke live from the Baltimore Carmelite monastery, their two discussions, held Aug. 10 and Aug. 11, broadcast to the assembly gathered under the theme “Mystical Wisdom: Following Spirit’s Beckoning,” Aug. 9-12. The spiritual conversations were in lieu of the assembly’s regular keynote presentations.

Touching on a handful of current crises — including violence, displacement, the rise of authoritarianism, and the transfer of religious properties — as well as divine cosmic mysteries and the importance of relationality, Copeland and FitzGerald were tasked with offering an example to the sister leaders gathered in St. Louis, Missouri: how to tap one’s spiritual resources, how to speak on spiritual wisdom in an accessible way, how to “think theologically together,” as FitzGerald put it.

In their 30-minute conversation held Aug. 10, mass migration was one of many concrete issues in which the two scholars considered the powerful effect that forced displacement has on one's sense of security and belonging, what it means to lose one's home.

Careful not to make a direct comparison with migrants fleeing violence, war and poverty, FitzGerald noted that sisters currently in the throes of property concerns — with congregations throughout the United States having to sell their motherhouses or place of ministry — are, in a sense, living through a kind of displacement and "loss of place," as well.

"It's mirroring to us other persons in this country who are seeking their rightful place," FitzGerald said, such as Blacks "who are owed a place that they weren't ever really given, and Indigenous people whose place was taken away and who are deserving of a place," topics that Copeland frequently addressed in their exchanges.

"I don't think we can take lightly the fact that communities need to sell, or know it's time to sell, their communal place, their home, their hospital,” she said. "This might well be a death-dealing displacement for our communities, as well as a betrayal of our evolutionary commitments and responsibilities, unless we appreciate the significance of the personal and communal uprooting that's taking place."

Copeland said that reminds her that "the end is where we start. … This is not a time to give up."

In the hourlong conversation held Aug. 11, the two scholars focused primarily on relationality, both the importance of seeking communion across cultures but also with the crucified Christ, as well as what it means to be a prophet, to engage in the exercise of hope, and to learn from enslaved persons what it means to suffer.

Mystics across cultures, Copeland said, "are not only dancing [together], but are engaged, giving themselves over to a form of contemplation that may lead them someplace else in terms of consciousness, and in terms of their relationality," she said.

For example, while it took her a long time to learn to listen to jazz, Copeland said, she eventually grew to appreciate its creative improvisational nature, how it "moves in a way that you don't expect. And that's part of attuning oneself to spirituality, the movement of God in this life. You're expecting something, but you're not getting what you expect."

When considering what it means to be a prophet, Copeland notes the importance of protesting both "idolatry and ideology within and without," of challenging the status quo and "daring us to live and act concretely, in the here and now, for the sake of justice and Trinitarian communion of God."

Just as ancient prophets of Israel could sense God’s anguish over his people, she continued, "so the prophet has to be, in this sense, loving and comforting and consoling God as much as comforted and being consoled. This is hope."

With the help of the many theologians and writers that Copeland and Fitzgerald quoted with ease, the two also shared analogies that helped illustrate the esoteric concepts at the heart of their conversations, giving the sister leaders tools to communicate that which is central to religious life, but rarely spoke aloud.

"We're like a ball of yarn that's being unraveled, and we hope that it gets rolled back together at some point," FitzGerald said.

"While we're losing the selfhood that is predicated on individual identity — and this is very threatening for us, I think — the dark night, or this process of mystical wisdom, results in a reconfiguring of our selfhood. … This is the place where the deepest identification with the migrant, the poor, the despised, the starving, the rejected, the Indigenous people, the African American people, those who have been or are deprived from their place — this is where the identification really takes place.

“It's taking place within us when we stand frail and unraveled and displaced with Jesus at the cross, and feel the intensity that we can hardly endure with all these people,” she said.

In wrapping up their conversation, Copeland said that "charism can't be a tradition, it can't be a chain. It must be a root.

"Hope is an ontological need. A need for being. You can't live without hope."

Go into the world: Sisters find common ground with people of other religions

US sisters strive to keep community during yearlong COVID-19 lockdown