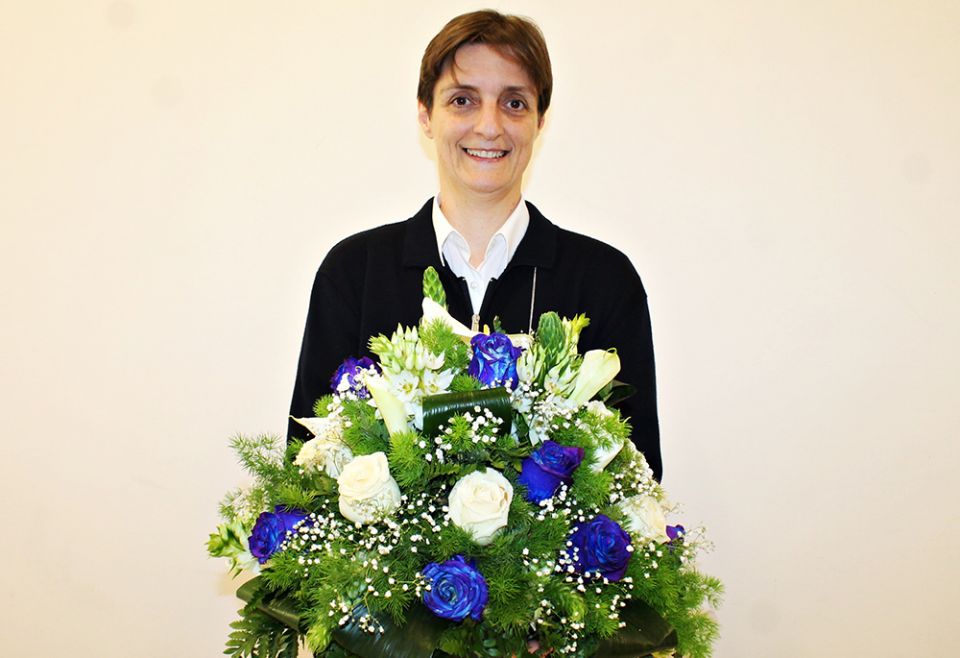 Sr. Nadia Coppa of the Adorers of the Blood of Christ is the new president of the International Union of Superiors General. (Courtesy of UISG)

Rome — When Sr. Nadia Coppa was 19 years old, she was already certain she wanted to commit the rest of her life to God as a religious sister. But she never could have imagined that 30 years later, she would become the president of a body representing approximately 600,000 sisters from around the globe.

On May 11, the International Union of Superiors General announced that Coppa, an Adorer of the Blood of Christ, had been elected as its new president.

At the conclusion of UISG's May 2-6 triennial plenary assembly in Rome, some 700 religious superiors worldwide signed on to a final statement that pledged "to live vulnerable synodality through service as a leader, animating it within the community, together with the people of God."

While such a commitment requires a team effort, sisters are looking to Coppa, who is Italian, to help lead the way.

Coppa's own experience of embracing vulnerability can be traced back to her time in Florence, Italy, studying for formation, where she worked with drug users and helped to integrate them back into society.

"There, I learned to live consecrated life in a deep sense and to give life to others," she told Global Sisters Report. "I learned to listen and accompany people living life in a vulnerable condition and help them find a new way to live in dignity."

Twelve years later, in 2017, Coppa was elected general superior of her community in Rome, providing her with a glimpse of the diversity of the religious women she would eventually help lead and the global dimensions of the Catholic Church.

"The universal face of the church is in Rome," she said.

During this period, she said, she underwent a personal transformation that shaped her leadership style. She became guided by the question, "How can I help religious women be what they are called to be?"

Now, in her new post as president, she gets to consider that question on a daily basis.

Coppa's presidency coincides with a particular moment in the life of the global church in which Pope Francis is attempting to use synodality to shape a more participatory church that is able to accompany all of the people of God.

Coppa said the recent UISG plenary is proof of the commitment of religious women to the pope's project of synodality.

"This is another way to grow as a woman and as women religious and a new experience of people of God," she said.

The plenary, with its theme of "embracing vulnerability on the synodal journey," became a "sacred space to share about our vulnerabilities as leaders of congregations," she said.

"Vulnerability is part of our lives as consecrated women, and we have to embrace it, not remove it," she said.

Pope Francis displayed his own vulnerability in his May 5 meeting with plenary attendees, when he appeared in public using a wheelchair for the first time following several months of severe knee pain.

"I was so touched," Coppa said. "I felt his tenderness. It was a strong witness for us."

"Sometimes, we have the idea that we have to be able to manage all the challenges," she continued. "Pope Francis shows us vulnerability can be a space to be in solidarity with others."

During that meeting, the pope told the superiors that synodality is a way to affirm the original charisms and intentions of the founders of religious congregations while at the same time responding to the needs of a rapidly changing world. 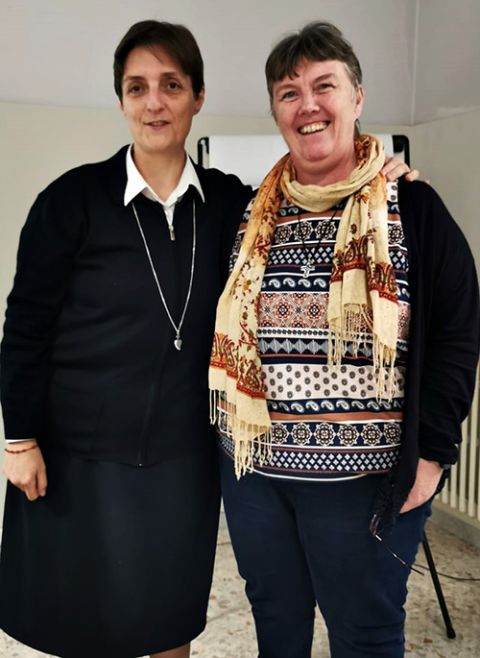 Sr. Nadia Coppa of the Adorers of the Blood of Christ, left, the new president of the International Union of Superiors General, with Sr. Mary Teresa Barron of the Missionary Sisters of Our Lady of Apostles, UISG's new vice president. Coppa and Barron will serve until 2025. (Courtesy of UISG)

Because Coppa is an Adorer of the Blood of Christ, her charism is charity to both God and others. For other religious superiors, she notes, there will be other areas of emphasis.

"We have different cultures, different languages and different ministries, but the same mission," she said. "And we have the Gospel in common."

Coppa and her vice president, Sr. Mary Teresa Barron of the Missionary Sisters of Our Lady of Apostles, will serve a three-year term until 2025 supported by a board of 11 advisers.

While the task ahead is an important one, Coppa said she is encouraged to be surrounded by "good women and good ideas."

Among her priorities are deepening the relationship between UISG and the Union of Superiors General, improving the network of sisters around the world, and strengthening dialogue and collaboration between various Vatican dicasteries.

Coppa will also likely play an important role in the much-anticipated 2023 Synod of Bishops on synodality.

Coppa said she hopes women religious superiors will have a vote, but "what is important is talking together, thinking together."

In 2015 and 2018, nonordained male religious superiors were granted the right to vote, opening up the possibility that women would also receive the right.

"The synod is moving by the Spirit and the listening of the Spirit," Coppa said. "We can try to find the best way to give voice to all of the participants, and what is important is to discern and then to share responsibilities with others to express themselves."

But regardless of whether women religious receive a vote or not, she is confident they will continue to be guided by the "prophetic spirit" of synodality.

"The future of consecrated life is to walk with others," Coppa said, "Not before or behind, but together."

Presidents Day takes place amid US struggles with division, identity

In GSR's 2021 columns, sisters from across the globe told amazing stories