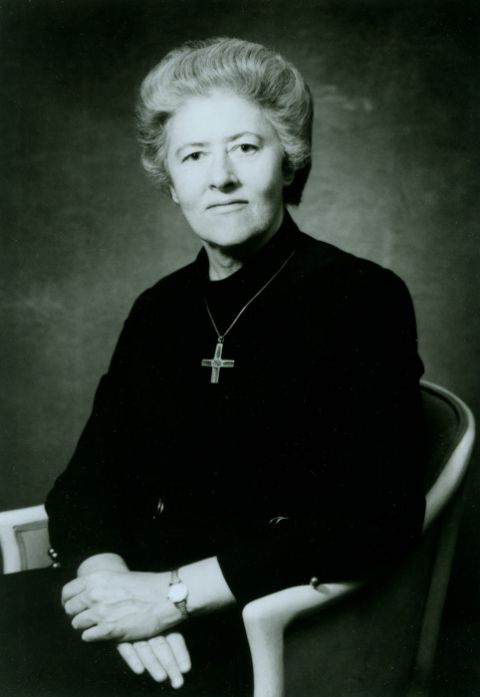 Washington — Sister Margaret Claydon, who was president of what is now Trinity Washington University from 1959 to 1975 and who set a national standard for Catholic women's education, died Feb. 1. She was 97.

She was a member of the congregation of the Sisters of Notre Dame de Namur for more than seven decades. She died at Mount Notre Dame in Cincinnati.

Founded in 1804 by St. Julie Billiart, the Sisters of Notre Dame de Namur are a global congregation of religious women devoted to education for women, children and the poor, and action for social justice.

"Sister Margaret's legacy at Trinity continues to be powerful today," said the university's current president, Patricia McGuire, who was a student there during Claydon's presidency.

"True to her vision, we remain insistent on the value of the women's college as a force for the development of women leaders of conscience and excellence," McGuire said in a statement.

During her tenure as president of Trinity College, "Sister Margaret" as she was known to generations of students and alumnae led a series of remarkable changes that modernized the college and laid the foundation for the institution known today as Trinity Washington University.

Leading an institution of higher education through the tumultuous decade of the 1960s was no small task for any college president.

But beyond the universal problems of managing the campus during an historic era of social change amid war protests and the movements for civil rights and women's rights, Margaret had an additional challenge when she took the helm at Trinity in Washington in 1959: She had to figure out how to keep a traditional small Catholic women's college relevant and thriving in a world increasingly favoring large coeducational universities.

Only 36 when she took office, Margaret was one of the youngest college presidents in America.

Displaying the modern vibe that characterized so much of her career, she immediately called a news conference to announce her plans for promoting women's education at Trinity.

As Time magazine reported Nov. 2, 1959, Margaret declared the need for more women to exert public intellectual leadership, saying: "We're not in the business of training committee women or bridge players."

A 1945 graduate of Trinity with a doctorate in English literature from The Catholic University of America, Margaret was legendary for her rigorous insistence on academic excellence along with women's leadership in the public arena.

Some of the notable graduates of Trinity during her time as president and a faculty member include Democratic Congresswoman Rep. Nancy Pelosi of California, class of '62, who became the first woman ever to be speaker of the U.S. House of Representatives; Kathleen Sebelius, class of '70, who served as governor of Kansas and as secretary of Health and Human Services in the Obama administration; and Barbara Kennelly, class of '58, the first Trinity graduate to serve as a member of Congress.

This group also includes Cathleen Black, class of '66, who rose in publishing to become chairman of Hearst Magazines; Maggie Williams class of '77, who was chief of staff to first lady Hillary Clinton; and Kellyanne Conway, class of '89, current White House counselor.

Committed to the central importance of the liberal arts, Margaret led revitalization and modernization of Trinity's curricula and pedagogy, adding graduate degrees for teachers and pastoral ministers in the Washington region, and opening the undergraduate program to older women seeking to complete degrees.

She secured a chapter of the prestigious Phi Beta Kappa honor society for Trinity, only the second Catholic women's college in the country to do so.

In a 1965 speech "Inheriting a Revolution" she spelled out the whole point of a liberal arts education: "We have to be willing to acquaint our students with controversy and problematic knowledge. The emphasis cannot be only on the assemblage and mastery of facts, but must be on how to make sense of them in relation to the whole human condition. We have to encourage our students of today to take stands that may be unpopular, that may even expose them to ostracism, debate, controversy."

"One of the basic rights of free people," she continued, "is to be informed truthfully about public events. Our students must be taught from the very beginning that this right is theirs, that they have a duty to seek the facts, the right to investigate truth freely."

Margaret played a significant national role in advocating governance changes for Catholic colleges and universities to empower more lay leaders. She advanced the cause of ecumenism in education through such projects as an inter-faith conference for Catholics, Protestants and Jews.

Under Margaret's leadership, Trinity experienced dramatic growth in the size of the student body through the 1960s, and she led building programs for a new library, fine arts building and a residence hall.

But the wave of coeducation at formerly all-male universities proved to be a setback for Trinity and all women's colleges, and by the early 1970s enrollment was in a sharp decline.

Believing that a women's college was still an important form of education, Margaret continued to push for innovative changes to keep Trinity competitive in the changing landscape of higher education.

After 16 years in office, she resigned from the presidency in 1975. After a sabbatical at Yale University, Margaret returned to Trinity as a professor of English. She continued to teach Shakespeare and her beloved poets Jesuit Father Gerard Manley Hopkins, William Butler Yeats and T.S. Eliot.

Susan Margaret Claydon was born July 19, 1923, in New Rochelle, New York, to George Thomas and Susan Murray Claydon. She was the oldest of six children. She attended New Rochelle High School. She enrolled as a freshman at Trinity in the fall of 1941, and was part of the generation of college students in Washington in the aftermath of Pearl Harbor and through World War II.

She entered the Sisters of Notre Dame de Namur in 1946, teaching Latin at several high schools operated by her religious congregation. She returned to Trinity in the English department in 1952. She served as Trinity's president from 1959 to 1975, and then as a professor of English until her retirement in 2004. After retiring she lived in her congregation's community at Trinity until she moved to Mount Notre Dame in Cincinnati in 2015.