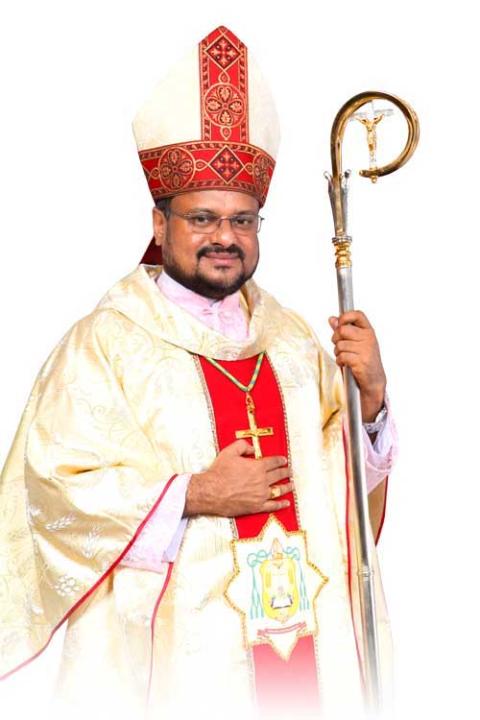 The rape case against Bishop Franco Mulakkal took a new turn over the weekend when a new allegation of sexual misconduct against the prelate emerged a day before he was to appear in court in Kerala, India. The second accuser, a member of the same congregation as the first, is already a witness in the pending trial against the bishop.

The second accusation surfaced against a backdrop of India's bishops reiterating their "zero tolerance" against sexual abuse in the church at the end of their biennial plenary last week in Bengaluru.

Mulakkal did not appear Feb. 22 in the District and Sessions Court of Kottayam to face trial for allegedly raping a former superior general of the Missionaries of Jesus multiple times from 2014 to 2016.

Instead, his lawyers petitioned the court for an order to ban media coverage of the case as well as discussions on social media platforms. They also said the new allegation was timed to influence the case.

The Indian media on Feb. 21 reported the new allegation against Mulakkal by the second Catholic sister, who alleged that the bishop made video calls to her at night and indulged in obscene talk about each other's bodies.

The nun, however, has not officially lodged a complaint against the bishop.

The new allegation has prompted supporters of the accusers to demand Mulakkal's suspension as the Jalandhar bishop. Mulakkal has been removed from administrative tasks but has been present at numerous diocesan events and still appears as bishop on the diocesan website.

At the Saturday proceedings, the court allowed only the lawyers of both parties to be present when it heard the petition for the media gag order. The hearing was conducted with the courtroom's doors and windows shut.

Sr. Anupama Kelamangalathuveli, spokesperson for the rape survivor, said that after the new allegation, the Catholic Church leaders in India should end their silence and immediately suspend Mulakkal as the Jalandhar bishop and initiate an investigation against him under the canon law.

"Now it is clear that [Mulakkal] sexually exploited many others. However, nobody was ready to come out against him, fearing retaliation," Kelamangalathuveli told GSR.

The new allegation was actually part of the 2,000-page police charge sheet the prosecution filed against Mulakkal in April 2019 to a lower court in Palai near Kottayam. The second accuser is among the 83 witnesses in the first case.

In her testimony to the police, the nun had said the prelate started talking to her with sexual overtones in 2015. "It made me feel disgusted, averse and experience mental agony," she had told the police, according to the charge sheet.

In 2017, the nun was transferred to one of the congregation's convents in Kerala. Her statement to the police states Mulakkal had come to the convent on April 30, 2017, and called her to his room at about midnight to discuss some matters.

"The bishop and I spoke for nearly two hours. As I was leaving the room, he hugged me and kissed me on the forehead. I felt disgusted," she added.

Sr. Alphy Pallasseril, who stays in the Kuravilangad convent where the original rape survivor lives, says many people had accused the survivor and her supporters of lying to defame the bishop and the church. "Now we hope they have changed their opinion and understand the reality about [Mulakkal]," she told GSR.

Pallasseril and four other nuns had staged a sit-in in Kerala in September 2018 that led to Mulakkal's arrest and imprisonment for three weeks. The Kerala high court granted him bail on Oct 15, 2018.

The latest hearing in the Mulakkal case took place three days after 192 bishops ended the Catholic Bishops' Conference of India Feb. 19 announcing "zero tolerance" to sex abuse cases in the church. The bishops' statement followed a Feb. 18 protest by 200 lay Catholics supported by priests calling for the prelates to act against another bishop accused of fathering two children. Complaints by the protestors to church authorities and the Vatican have yielded no response until the bishops' statement last week.

The bishops asserted that they would initiate action against any offender irrespective of his position in the church.

The bishops had first promulgated their guidelines against sex abuse cases in 2017. However, their action has remained only on paper.

Shaiju Antony, a Catholic lay leader and joint convener of the Save Our Sisters movement, said the bishops should visit the rape survivor if they really meant what they said. "They must ensure at least their president, Cardinal Oswald Gracias, should personally visit the new complainant and help her file a police case against Mulakkal," he told GSR.

The movement, comprising mostly lay people, was started in September to help the rape survivor and her supporters. It had convened the 2018 sit-in against Mulakkal that had attracted supporters from all religions.

Antony said he find it ironic that church leaders support the accused rather than the rape survivor.

"Until now they [the bishops] blamed the rape survivor and saved their skin on the plea that the case damaged the image of the church. But if they remain silent, even after the new allegation against Mulakkal, their 'zero tolerance' pledge would become a farce and people's faith in them would diminish further," he warned.

Antony was at the Kottayam court to witness the hearing on Feb 22.

"What we generally see in the Indian courts is that the rape survivors ask for an 'in camera' hearing. But in this case the accused is asking for secrecy in the hearing," he pointed out.

An "in camera" hearing is a term in Indian legal circles where only the judge, court officials and the counsels for both parties are allowed inside the courtroom. Other people, including media and police officers, are asked to leave.

Since the first court date set for Nov. 11, 2019, the Mulakkal trial has been delayed by numerous defense postponements. The new hearing is scheduled for Feb. 29, when the prosecution will also argue against Mulakkal's petition to dismiss the charges.

However, on that day, Mulakkal's attorney filed an application to dismiss the case, claiming that the charges against the prelate are based only on the statements of witnesses who have resentments against him.

After a couple more postponements, the hearing on the application to dismiss all charges was fixed for Feb. 22. Mulakkal's attorney then filed another application to ban media coverage.

Mulakkal has so far successfully dodged every date given to him for a court appearance.

Antony sounded exasperated when he said many issues linked to this case are now pending in the court. "The framing of charges is pending, the discharge application is pending and a hearing on the media gag application, too, is in great secrecy," he said.

According to him, all these are tactics to delay the trial. "Now, if the court dismisses both the applications, he will go to the high court, then to the Supreme Court, and thus, he will ensure that neither charges will be framed against him nor will the trial begin in the near future," he added.

"The poor nuns are bearing the brunt of his acts," Antony said. "It will also gradually force the witnesses to give up the fight."

Kelamangalathuveli said the nun who made the new allegation has not lodged any complaint against the bishop, "which means she is influenced."

Antony said the new accuser's statement alone would not hold up in a court of law. "It would have been legally sound had the police taken her to a magistrate and recorded her statement."

Binu Chacko, a Mulakkal supporter, disagreed with the demand for a church probe against the prelate or his suspension.

"We really do not know if the attributed testimony is right or wrong. Besides this, it is part of the charge sheet and, if it is true, it is for the court to decide the future course of action, including punishment," Chacko, who was also present in the court last weekend, told GSR.

Chacko said that church leaders can act only when a complaint is officially placed before them.

The bishops' conference officials did not respond to calls for comments on the matter.

Read this next: Cardinal Gracias: Church must 'shed prejudice' against women's leadership
Read this next: Q & A with Sr. Lissy Vadakkel: 'I want to live until I give my statement' in court
This story appears in the Bishop Mulakkal trial feature series. View the full series.