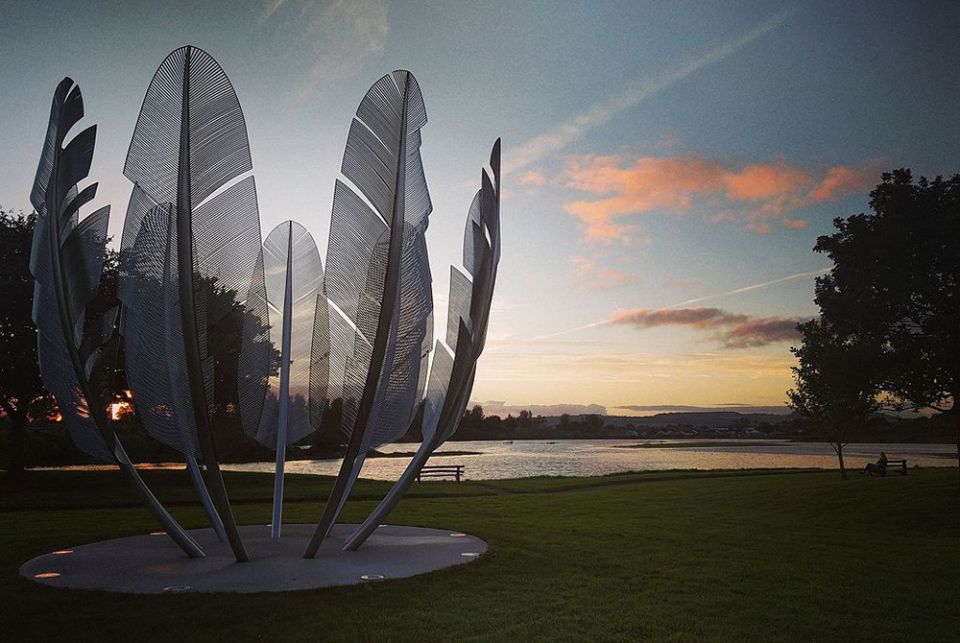 The past beats inside me like a second heart.
—John Banville, The Sea

Recently one of our sisters who had served on the Standing Rock Sioux Reservation shared a photo of a monument called "Kindred Spirits." Each of the nine stainless steel eagle feathers stands about 20 feet in a circle representing an empty bowl.

The background of the monument goes back to 1847, when Choctaw Indians in the United States heard about the Irish Potato Famine, which would claim the lives of over a million Irish. Having recently experienced their own famine in being forced to leave their land and walk the Trail of Tears (1838-1839) they decided to reach out by collecting $170 dollars which they sent to the Irish. Such a generous gift, given out of their need, would have been equivalent to about $5,000.

They share a past, as both Ireland and the Choctaw experienced colonization and oppression.

As Irish author Sean McGarry told Navajo-Hopi Observer: "What [articles] fail to note is that it was also the largest donation received, and from one of the smallest nations. In our darkest hour, your ancestors taught us the meaning of unadulterated altruism —173 years later, it's not forgotten. It's very much alive."

This unexpected gift from strangers across the ocean impressed the suffering Irish and forged a strong relationship, which is still remembered with gratitude.

In 2017, Choctaw Chief Gary Batton went to Middleton, Ireland, for the dedication of the sculpture "Kindred Spirits," created by Irish artist Alex Pentek to honor the generosity of the Choctaws in 1847, according to ChoctawNation.com. The sculpture had to be installed on site since it was too large for his studio, Pentek said, adding it had "to be hand-tool finished, to give a human element to the work."

According to Irish Examiner, "I wanted to show the courage, fragility and humanity that [the Choctaw Nation] displayed in my work," the Irish artist said.

This monument matters, as it reminds us of mutual compassion after bitter hardships that could have hardened hearts.

Most recently the Irish people heard that Native Americans were suffering because of the novel coronavirus. Irish donors contributed to GoFundMe pages for Navajo and Hopi communities in desperate need, adding to millions of dollars that were raised.

As I wrote this, John Lewis, Congressman, civil rights leader, keeper of the history of the best in American values, was being laid to rest. One speaker after another spoke of his ability to include everyone, challenge "plantation capitalism," and all the while being open to compromise but not compromising his values. His efforts to secure voting rights for those disenfranchised in our country are well known.

Perhaps an appropriate monument for John Lewis would be to rename the Edmund Pettus Bridge in his honor. Or to name the voting rights act with his name attached. Or build a monument honoring his legacy in the state of Georgia, which he represented for more than 30 years.

However, it seems his legacy will best be remembered in his personality of respectful listening, sharing why he disagreed and looking for the common good. Certainly, like the Choctaw Nation and so many others, he had every reason to be bitter, to move toward violence or cynicism.

However, he opened himself to a spirit of forgiveness, which is the greatest renewable energy among us.

This choice meant joining hands to work for a better America, and leaving broken dreams behind. His life is a monument representing the nobility of forgiveness and the positive energy released for building community.

I belonged to a parish community that I loved.

We had a faith-filled pastor and a dedicated choir director, both doing a good job. However, differences arose between them. Soon there were ill feelings, gossip and a fracturing of the parish into camps. It was most disturbing, and had gotten worse in the months leading to Holy Week. Usually the choir performed the Stations of the Cross in church as a ritual prayer that brought the parish together. However, the pastor decided there would be no Stations concert, and this public disagreement deepened the hurt.

Holy Saturday came, and I will never forget the choir practice that preceded our service. We were singing without zest and the "Alleluia" chorus sounded like a bored rendition of "Holy God."

Unknown to me, earlier that day the choir director had approached the pastor asking his forgiveness, and he, too, acknowledged his failure.

About 15 minutes before we ended practice and would be heading to the choir loft, there was a hush in the choir room. As we turned to the door, we saw the pastor standing there. He said something like this: "I'm here to ask your forgiveness." Naming the choir director, he said, "We are both good at what we do, but we had failed to work together. I'm sorry and hope you'll forgive me."

Our response was a hushed silence, and then tears, and then laughter. We could hardly believe that in less than five minutes, the energy had shifted among us. We hurried to get to the choir in time for the Easter Vigil to begin.

As we began to sing, something broke open inside me and I felt similar feelings in those standing near me. Suddenly a weight had been lifted and we were free. It was a corporate experience of integrity.

This moment was recognized when we sang the "Alleluia" chorus, and the congregation turned around to watch us. As someone said later, "I thought another choir had joined you since there was such volume and resonance."

The "monument" is a thriving parish community today, because we tapped into the most renewable energy on Earth: forgiveness. Like the Choctaw Nation, the Irish, and Congressman John Lewis, we learned the energizing power of forgiveness.

"The past beats within us like a second heart," and the renewable energy of forgiveness can change the course of history.

In behalf of the human family