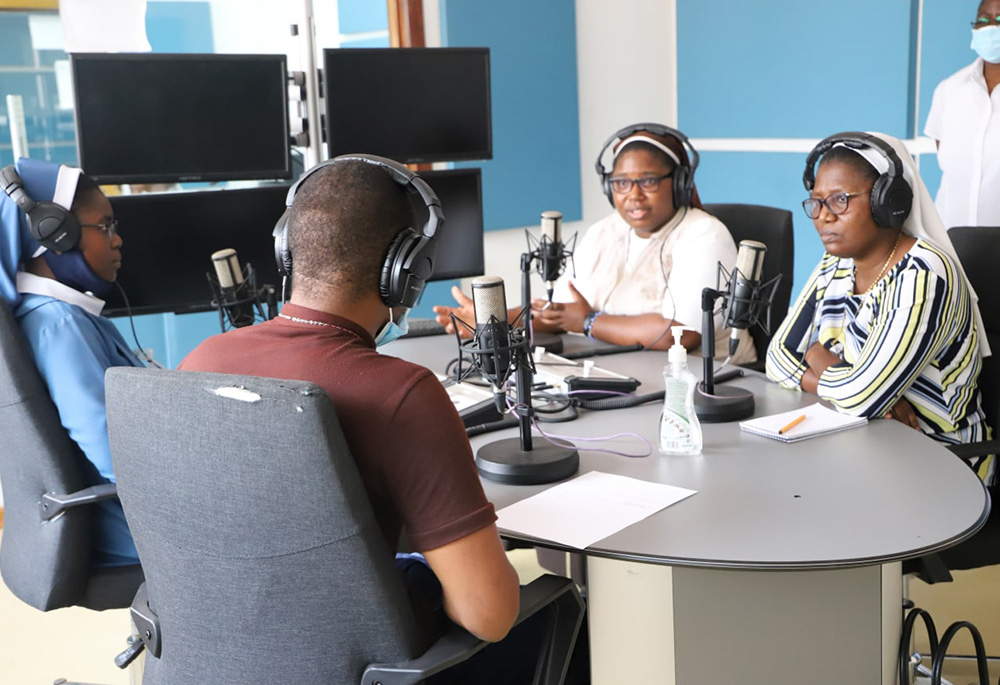 Sisters discuss human trafficking as they broadcast from Radio Maria Yatsani Voice 99.3 FM in Lusaka, Zambia. Radio Maria is a private, civil nonprofit radio station across countries. Radio Maria in Zambia reaches the bordering countries of Malawi and Mozambique, with more than 1.5 million listeners. In Uganda and Tanzania, the sisters pay to use the station for public engagements. (Sr. Eucharia Madueke)

In November 2021, I learned for the first time in my life that there is something called advocacy. That was when I attended a workshop on advocacy: "Religious Vocation, Church, Society, and Prophetic Witnessing" at the Salesian City of Hope Retreat Center, Makeni, Lusaka, Zambia.

I knew from the Bible that Jesus Christ promised "to send the Holy Spirit, the Advocate" who would remind the disciples all that Jesus did and taught (John 14:26). I also know that if one has a court case, then one needs a lawyer, called an advocate, to help one present their case in proper legal terms. I was not aware that I too can be an advocate. The question I might have had would be: in which circumstances and how?

The Zambia Association of Sisterhoods, or ZAS, invited sisters of our country — through the Major Religious Superiors — to attend that workshop on advocacy. We convened in Lusaka at the retreat center: 65 Sisters from 45 congregations coming from all the 10 provinces of Zambia. We had two presenters: Rev. Fr. Aniedi Okure, a Dominican priest based in Rome, and Sr. Eucharia Madueke, a Sister of Notre Dame de Namur based in Washington, D.C.

AFJN was inspired by the Gospel and Catholic social teaching to educate people about Africa, advocate for just relations with Africa, and work in partnership with African peoples to engage them in the struggle for justice, peace and integrity of creation — issues that impact Africa in general and Zambia in particular. This workshop focused on modern slavery, now under the new name human trafficking.

Related: Breaking the silence of human trafficking: Catholic sisters in Zambia speak out

We had a special guest, Martin Kapenda, the national director of Tehila Zambia, a child protection organization, to present actual research. He told us that human trafficking is real in Zambia and that Zambia is a source, transit and destination of human trafficking: 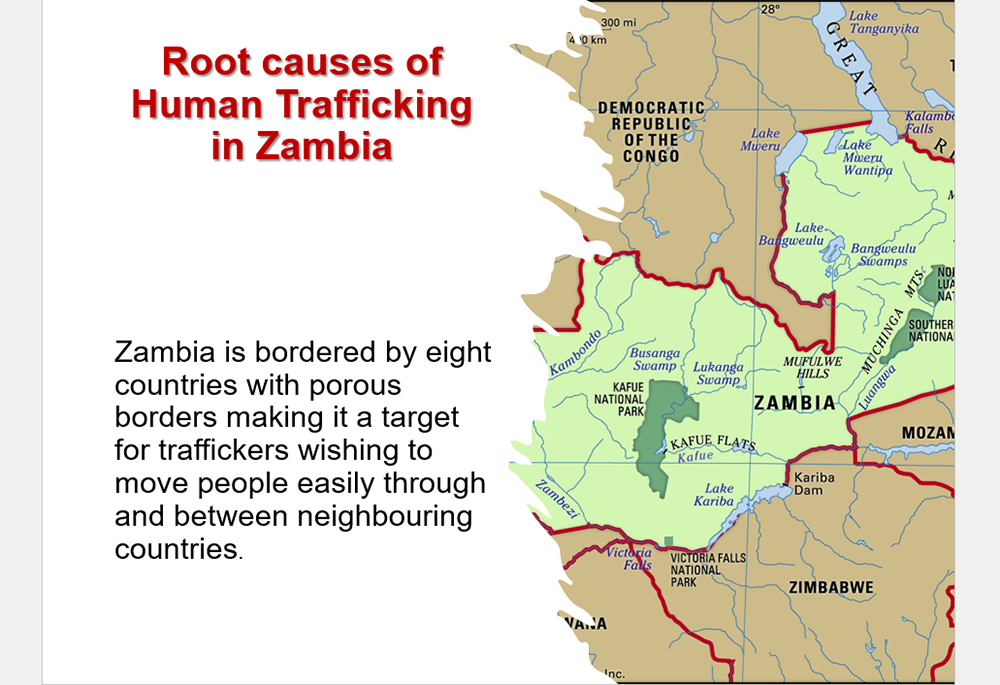 One of the slides used during the advocacy workshop illustrates root causes of human trafficking in Zambia. Martin Kapenda of Tehila Zambia presented research to the sisters in attendance. (Courtesy of Martin Kapenda)

He explained that what makes it difficult to identify victims is that internal trafficking (from within the country) looks familiar. For example, young girls are recruited from rural communities and brought to urban households for the purpose of domestic servitude — a practice called "cultural fostering," but which is in fact providing cheap or free child labor on a mass scale to city-based households in the form of live-in domestic servants performing routine chores including childcare.

For practical work, the workshop leaders had organized a trip to the Intercity Bus Terminus in Lusaka, where all buses arrive from within Zambia and also from other neighboring countries like Malawi, Zimbabwe, Botswana, Namibia, South Africa and Democratic Republic of Congo. When the large group of nuns burst into the bus terminus, the bus conductors got very excited, hoping for passengers for their buses! 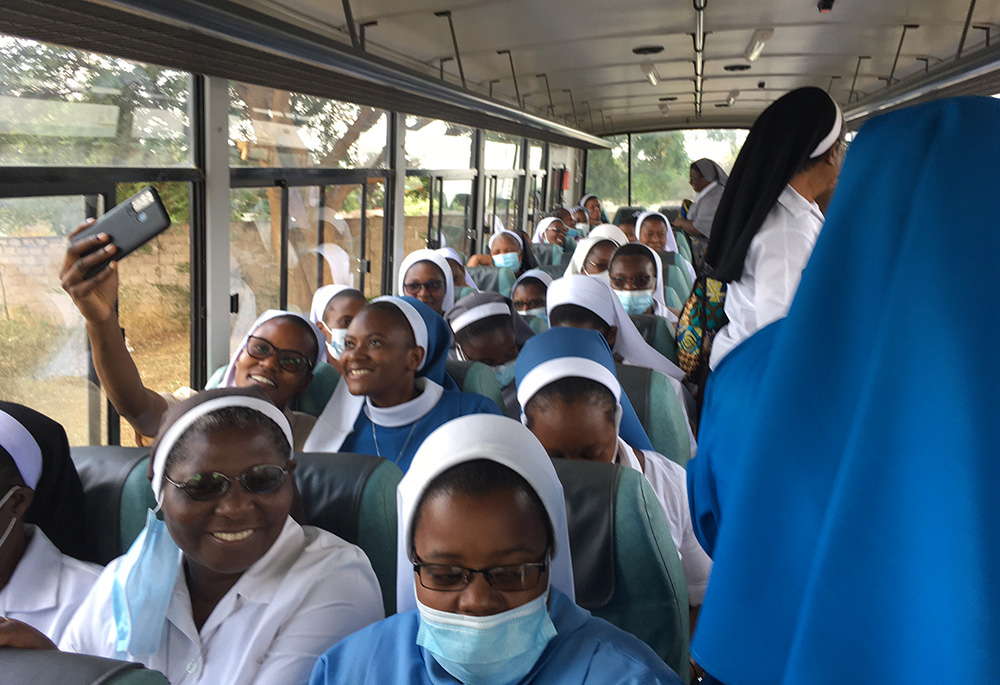 Sisters board a bus to take them to their advocacy sites in Lusaka. (Sr. Eucharia Madueke)

But we went to a small, obscure office staffed by two ladies, who told us real stories of people who returned home — luckily alive — after being taken by traffickers. I think that for some of us, this was the awakening point, because before that it had seemed rather far-fetched that a person could be stolen out of their own country.

In terms of action, the sisters prepared a press release to be aired on the Catholic Radio Maria Yatsani station in Lusaka on Nov. 16. The topic was "Protect the rights and dignity of our people from traffickers." It was presented by the Zambia Association of Sisterhoods president, Sr. Sylvia Kagulura of the Little Servants of Mary Immaculate. In her speech, she focused on how human trafficking has become a "highly organized efficient network of criminals that target vulnerable children and women from and within rural areas."

She described the people involved in the intricate network, that are known by victims as family members or near acquaintances. Next, she reflected on the adverse impact of human trafficking on individuals, families and the Zambian nation. She concluded by appealing to the government to mobilize and establish mechanisms of creating awareness of this evil, and establish training programs for law enforcement and immigration officers.

She concluded: "We on our part are committed to tackling this evil that is affecting our country by organizing awareness seminars in our communities and in the institutions under our care, provide counseling to the rescued victims, and finding ways to reintegrate victims to be productive members of our society."

From this first encounter with advocacy, I understand that as a religious woman, my vocation in the church is to bring the love and justice of God into society. God sends his messengers, like prophets of old, to remind the people and leaders about the human dignity of everyone created in God's image.

But, as of old, speaking up against someone's profitable business, like human trafficking, is a risk. I believe we are those messengers to speak for and rescue the victims. Are we ready for combat? We have heard, we have seen; we will act and react. As for me, Martin Kapenda is based in the small town where I live, Mazabuka, and I am going to find out how I can incorporate his programs into my work at the Nchete House Women's Center.