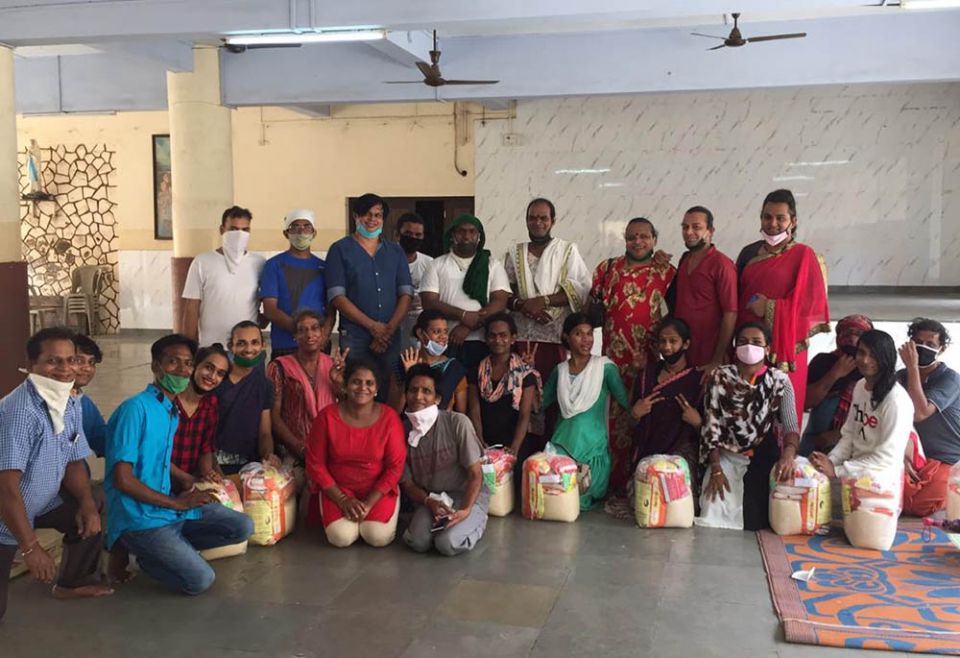 After a shared meal at the Canossa campus in Mumbai, India, transgender guests receive provisions to support them during the pandemic. (Provided photo)

It's been several months since I began interacting with transgender people. In the past, I had heard various myths about them, which made me afraid of them, so I avoided them whenever I saw them on street corners or in public places. Through my ministry of social outreach, I have been working for the enhancement of women and children, and had no experience of working with transgender people.

But as I began interacting with them, being in their presence and listening to their feelings made something shift inside me — from fear and avoidance to a rehumanizing of my attitudes toward them. I understood what "rehumanizing" truly meant to them when they tried to explain it in three words, namely, revaluing, resurfacing and refinding. 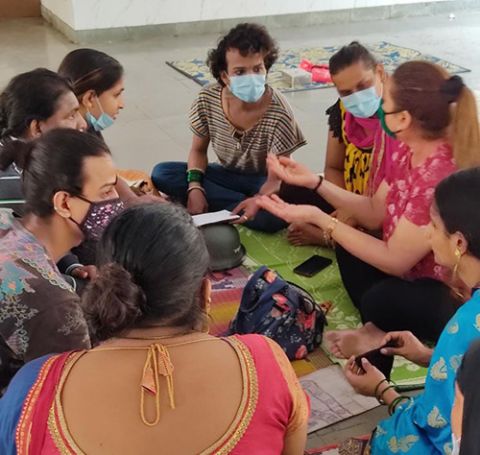 Transgender people hold a discussion during a meeting at the Canossa campus in Mumbai, India. (Provided photo)

In India, transgender people are seen in public places primarily engaged in begging. While some consider them a nuisance and want to get rid of them, a few others solicit their blessing. There are also some who consider them a laughingstock, pass lewd comments and make unpleasant jokes about them. For those people, revaluing would mean respecting not only the transgender choice of being true to their sexual orientation and opting to live as transgender, but also adding value to their lives by being sensitive about the words used to speak to them and about them. It would mean making efforts to ennoble them — as transgender people often are made to feel less human, that they are considered dirt and filth.

This brought to my mind "agape," which means to me that I have a special kind of shared responsibility to care for the well-being of others, especially of those who have been abused, neglected, victimized and marginalized. It is an invitation to engage in the process of rehumanization, beginning with respecting the differentness in the other.

It also reminds me of the famous fairy tale "Beauty and the Beast." Revaluing them also means that I revalue myself. It involves a certain groundedness to understand the "beauty and beast" within myself. The greater the value I have for myself, the greater is my ability to enhance the value of others who may be different. This esteem and regard would not only result in enabling them to revalue themselves but also help them resurface.

The word resurfacing emerged as I listened to their experiences of feeling rejected by their own family members — particularly their parents — and society at large. The consequences of this pain of nonacceptance and the search for finding their own identity sometimes leads them to discontinue their studies. They feel disinterested in pursuing a career of their choice, and disengage themselves from events like public celebrations.

In the course of my encounters with them, it occurred to me that they desired to get reintegrated into society. According to them, their need for reintegration is not just for self-acceptance but to help their latent potentials to resurface.

Resurfacing would provide them with the possibility of unwrapping the treasure they possess, and propel them to move toward integration — thus demystifying the definite purpose that the universe holds for them. In this search for "resurfacing," they would probably be able to refind themselves.

A few years ago, while working with tribal people, I got to travel with them to their villages during the monsoons, climbing hills and crossing streams. The tribals hurried as fast as they could, while most of the time I lagged behind, not knowing where my foot would land.

I have not forgotten those journeys and what they taught me. "Our feet find their own way" was their response while I was searching where to put my next foot on the soft soil of the hills. From then on, I learned that our feet find and continue to refind the path as they walk along.

In my encounters with the transgender people I have realized something similar. It helped me interpret refinding as a mutual, meaningful and gradual process. It involves a search to understand what inhibits my perspective in seeing what is true and real.

Secondly, it means to explore and give the other person a chance to express themself and to reach their higher and truer self.

Thirdly, refinding an untraced path also entails risks, and the will has to commit itself to refind the way in spite of setbacks and discouragements.

In this adventure, each moment is a fresh start, each climb a new beginning and every descent a learning experience, as we journey together in revaluing, resurfacing and refinding with the transgender people in order to rehumanize ourselves and them.

[Lavina D'Souza is a Canossian sister from Mumbai, India. In her present ministry as the director of the social center in Mumbai, she uses rights-based approaches in community development programs.]

Nuns on the Bus kick-off: Voting is like having job interviews for politicians