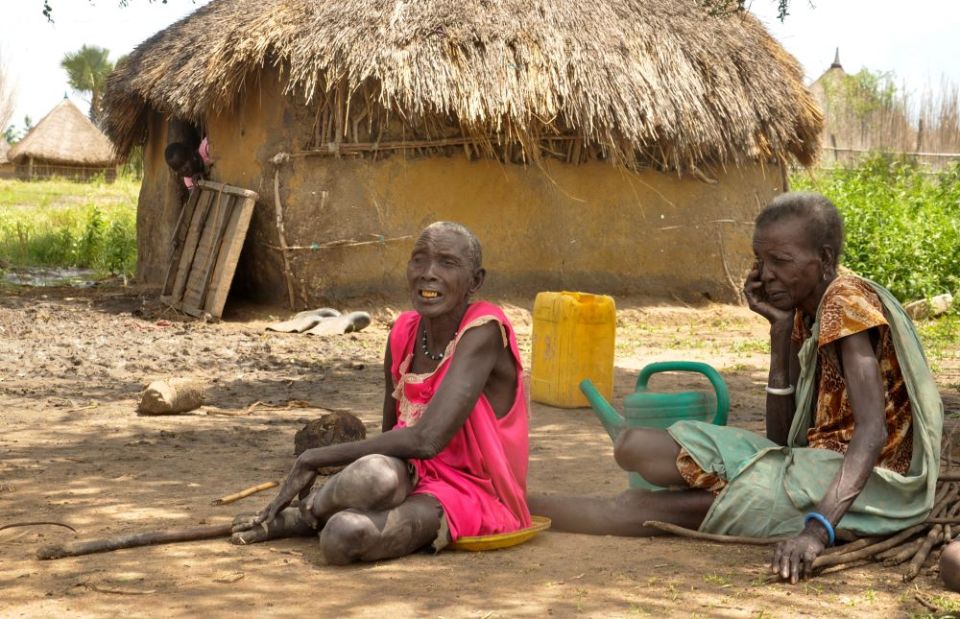 South Sudanese women sit outside their shelter in Genyiel county, Unity State, South Sudan, in this Sept. 24, 2020, file photo. Pope Francis had planned to visit Congo and South Sudan in early July, but that trip was canceled because of his health. (CNS/Reuters/Denis Dumo)

There was a growing sense of anticipation in South Sudan about the visit of Pope Francis to this country, originally scheduled for July, but now postponed. We are all so disappointed and are praying for the pope to be on his feet soon and to be able to come to South Sudan and the Democratic Republic of the Congo.

His personal commitment to establishing a lasting and durable peace is undoubted. His remarkable and unpreceded gesture in 2019 of kissing the feet of the two main political leaders and protagonists in conflict made headlines the world over. This clearly showed the power of two political leaders to do good or evil and the heartfelt desire of a spiritual leader to overcome all obstacles to peace, including personal ego.

There is a great yearning for peace, the cessation of violence, the establishment of democratic and accountable governance in a country that has known intermittent war for the last six decades. In my third year serving as a member of Solidarity with South Sudan, I have started to ask what peace will look like, especially for women in this new African independent country. Are we simply talking about removing the gun and the bullet from society, or does peace need to take on a different face and address the ordinary and often accepted face of violence?

When he does come to our country, should the pope look exclusively at the men who prevent peace or does he need to see the face and feet of the victims of the everyday and accepted violence against women and girls? "The Lord hears the cry of the poor …" I wish for the pope, the church and the world to acknowledge and address the primary victims, who carry so much of the life-giving force of this young country. 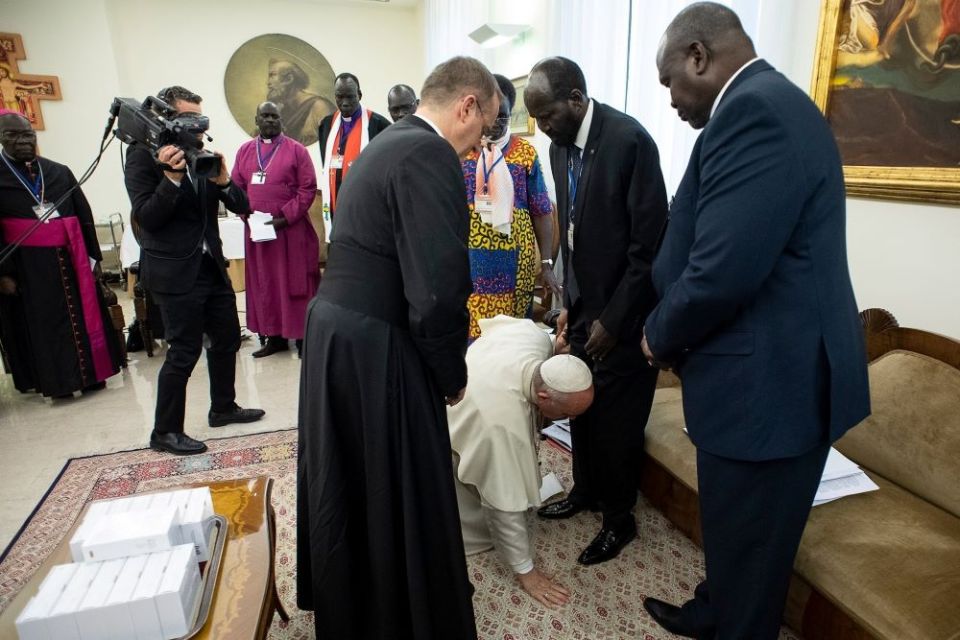 Pope Francis kneels at the feet of South Sudan President Salva Kiir at the conclusion of a two-day retreat at the Vatican for the African nation's political leaders, in this April 11, 2019, file photo. (CNS/Reuters/Vatican Media)

I have heard that Pope Francis has been called a would-be bearer of Good News, one whose visit might usher in a new South Sudan. My hope is that his visit will be an occasion to paint this new face of healing and peace, a restoring of relationships of peace, respect and dignity for all, but particularly for women and girls. It is my belief that true peace can only be established by addressing the source and the victims of violence, most especially those who have been robbed of all forms of respect, including self-respect. In this country that means looking at women and girls in the first place.

No one can give back what has been so mercilessly robbed from the most vulnerable in society. Human dignity and parity of respect are not items to be traded. It is easy to rob them, but it is only the survivors who can reclaim their personal space and forge new paths to dignity.

While bearing the scars of violation, the survivors are the only ones who can take control and give shape to their own lives.

My role as a woman of faith is to stand with them in this process and assist if and when they ask for help. I have been professionally trained in counseling and social psychology in Northern Europe. This has allowed me to reflect on my own journey as an African woman in a male-dominated society. I have been privileged to listen to women as they seek to claim their own voice and dignity, against inhuman odds.

Each person needs to find their own answers to what has happened to them. No one can give solutions, and not all succeed in finding their answers. In my 20 years in this field, I carry with me a great hope as I see the vulnerable and broken emerge to claim new lives for themselves.

Allow me to paint a picture that is vivid in South Sudan but which may speak to other societies as well. As the clock ticks, beckoning in a new hour, another day (and hopefully saying, "yes" to the new beginning), the South Sudanese woman raises her face with a yearning for history to write a different narrative. Peace, nonviolence, human rights and human dignity are words and terminologies that are not yet realities in their minds. This is a story bursting its seams with expectancy of a new dawn, a dawn when women and girls in the story will joyfully chant their Halleluiah to their newborn South Sudan!

But what has the ‘old’ South Sudan done to this woman?

Shameful to admit, parts of South Sudanese society enable an environment in which women and girls are generally viewed as commodities. In South Sudan, women are denied decision-making power and are at high risk of abuse and exploitation. According to the culture here, men can do anything because women just aren't valued.

Violence against women and girls is commonplace, and in recent years, South Sudan has seen some of the highest levels of sexual violence in the world. Attacks on women and girls occur throughout the country. Unfortunately, the country has limited ways of addressing these crimes — crimes basically associated with the frequent ethnic wars and conflicts fueled by ethnic divisions and cattle raids among many tribes. Violence against women and girls grows more pronounced at the time of such conflicts. It is horrendous to see or even imagine how men on both sides of the conflict use sexual violence and torture, especially of women and girls, as part of their winning strategy.

Impunity for perpetrators of gender-based violence, or GBV — both armed men and family members committing acts of domestic violence — is the status quo in South Sudan. Most cases of GBV are resolved through the customary legal system. Customary law is legally binding in South Sudan, a law highly patriarchal and rarely producing favorable outcomes for women and girls. Most GBV survivors feel that the system is rigged against women, and rightly so.

Talking to one middle-aged South Sudanese woman recently, I gathered that women and girls do not report GBV for many reasons, including not wanting to subject themselves to that level of scrutiny by elderly men in their communities, especially because case "hearings" are often public.

Nevertheless, that South Sudanese woman's resilience and hope for "a new dawn" remains steadfast — this woman and I both believe that Good Friday ushered in Easter Sunday! When Pope Francis finally visits South Sudan, will that be just what is most needed for lasting peace?

I would like to acknowledge the help I received from Fr. Jim Green, executive director of Solidarity with South Sudan, in shaping my thoughts for the column. 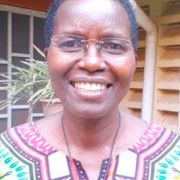 Scholasticah Nganda is Kenyan by birth and a member of the Congregation of the Sisters of Mercy. She is now serving as the director of pastoral programs for Solidarity with South Sudan, Juba, and is one of four members of the Solidarity Pastoral Team working in collaboration with the Catholic Bishops Conference of South Sudan to meet the pastoral needs of the church there.

Digging into the roots of my racialized childhood

As new administration settles in, sisters have hope in Biden's character and Catholicism